“Dotty” West- widow and grandmother of Phillip and Jamie, and mother of our favourite superspy-in-training Amanda King. Dotty is my favourite secondary character in SMK because of her quirky, unexpected and often spot-on observations and words of wisdom. And I also enjoy her selection of men. (Apologies for the title of this post – I’m a bit of a ‘Divergent’ fan). So I invite you to join me in a journey exploring Dotty.

Before we start, I’d like to thank iwsod for letting me use her screen caps – I fought bravely with the dvd software and lost – thank you, iwsod!!, and also acknowledge the massive amount of work that she puts into this blog. Now that I’ve done a couple of posts, I realise how mu 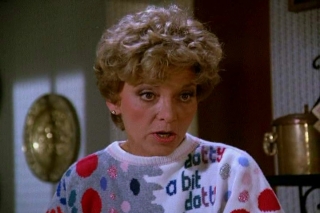 ch time she puts into it. Thank you, iwsod – you certainly brighten up my life with this blog

We are not quite sure what Dotty’s full name is. We are told it is Dorothea (One Bear Dances, One Bear Doesn’t) or Dorothy (Any Number Can Play). She appears to be in her mid to late 50s and is a widow. By early season three, we know nothing about her marriage except that her husband told he loved her (and everyone else in the room

) on New Year’s Eve after having too much champagne (Lost and Found). They went on holiday to Hawaii (Vigilante Mothers) – Dotty: My hula skirt rotted….I have nothing now to show for my one and only trip to Hawaii. I wish your father had not dropped the camera out of the war canoe (Lost and Found). 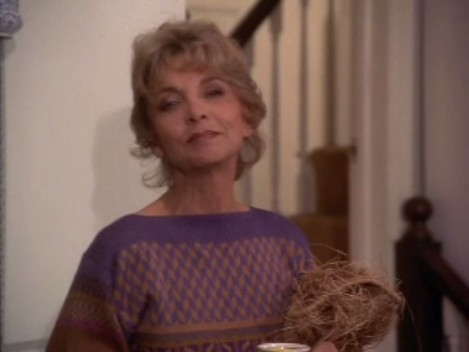 Amanda appears to be her only child. She has an uncle Iggy (Dotty: He was a brush salesman in Topeka. One day they found out he had joined a cult. He was becoming a wizard – Sudden Death) and she worries that Amanda, like Uncle Iggy, is living a double life – quite sharp is our Dotty

While I was ‘researching’ this post, I looked for more information on Dotty on the internet, and discovered a well-known American country singer called Dottie West whose career spanned the 1960s to the 1980s (her last studio album, called “Just Dottie”, was released in 1984). She also owned a *corvette* at one stage…Was she the inspiration for our Dotty??? 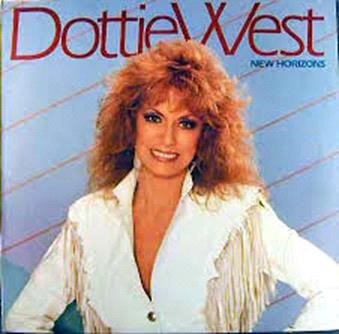 When do we first meet Dotty?

Dotty appears in the second scene of The First Time, after the rather random (IMHO) toga scene. And she actually gets the first word in (before Amanda but after the infamous Mrs Welch of the Pilgrim’s Peach Puff plot):

Dotty: Darling, is that all you’re wearing outside? Can you blame her? A nightgown, scarf and a coat?? My own mother would be less tactful (Learjet, why don’t you change? Or wear a nice necklace with that nightie?) 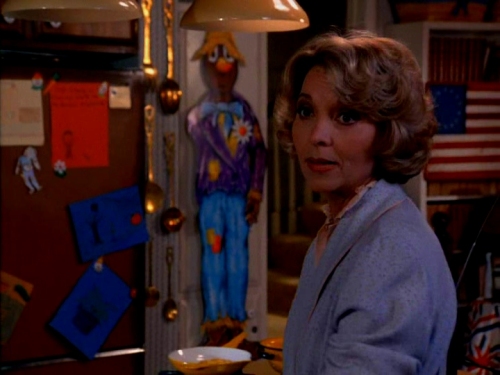 When Amanda has to find an explanation to as why she is meeting Lee, she invents a club “To save the Clams” (You need to learn to lie better, Amanda. But you will…

Dotty: I didn’t know clams were an endangered species

Arguably Dotty’s most famous line in the series is spoken in The First Time, when Amanda *again*uses her “club” as an excuse. Dotty: Clams again, dear? 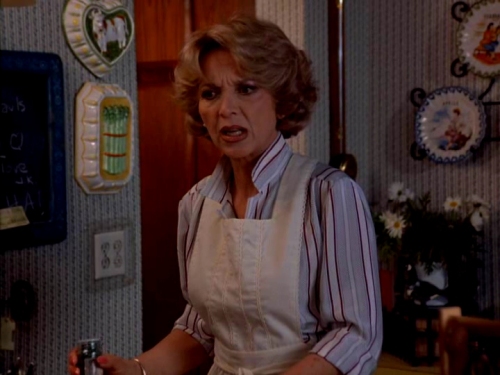 What do we know about Dotty?

Dotty is attractive and well-groomed, and was the Homecoming Queen (Always Look a Gift Horse in the Mouth). 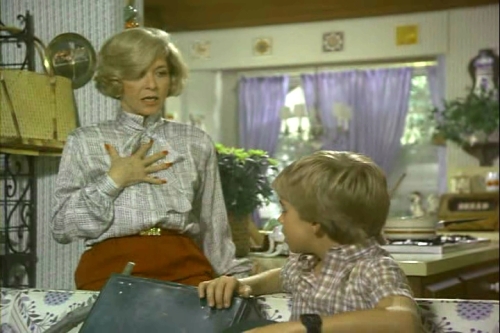 (look at those nails and hair!)

She has her hair done at ‘Emilio’s’ – Amanda: Mother, his prices are just outrageous.

Dotty:Well what am I saving for?! Until my daughter grows up and has kids of her own? (Delirious on Arrival). Even Emilio’s has been touched by ‘National Security’ issues – which Dotty sleeps through 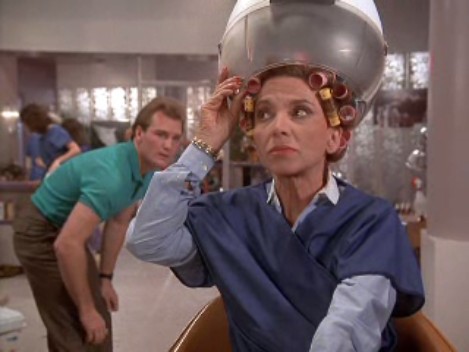 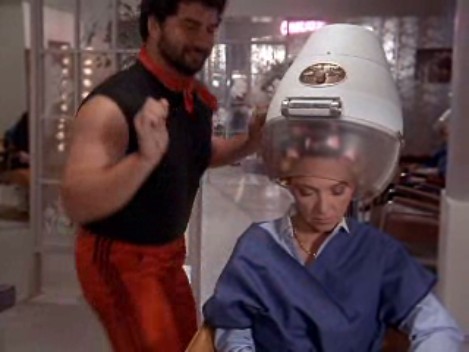 Does Dotty join Amanda in her “Fitness with Dave” sessions at 8 on Channel 12 (Magic Bus?) Quite possibly… We certainly see her efforts to get fit in the latter half of season two and early season three. In Murder Between Friends, she is vigorously cycling on her exercise bike (ah, the 80s – didn’t every family have one gathering dust somewhere?). Dotty: Besides I want to take a shower. ..Riding that bike is a lot of hard work! 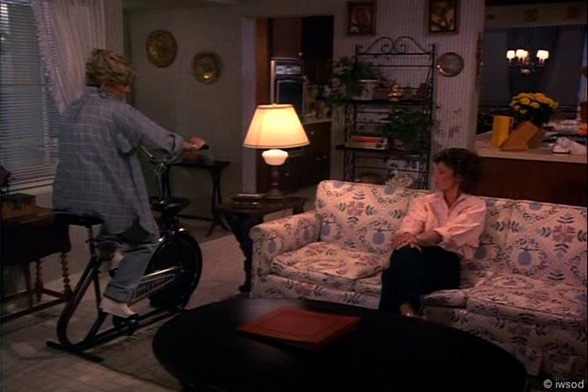 She also jogs (which is how she spotted Mr ‘Sampson’ when he moved in down the street – Vigilante Mothers) and does aerobics with Amanda (Tail of a Dancing Weasel). 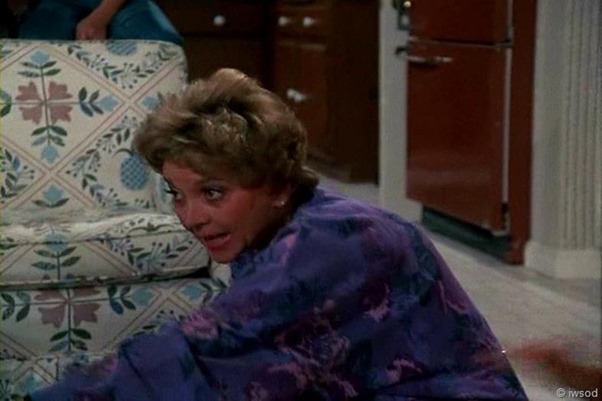 Dotty isn’t too fond of camping (which BG was apparently quite insistent on, and led to some tension with KJ, according to BG’s biography). 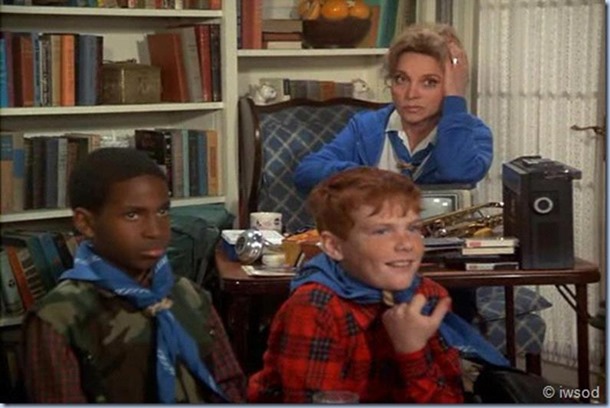 She tries to avoid it – Dotty: I think forgetting this camping business is the dandiest precaution!

Amanda: Oh well mother I don’t know why you don’t like it. I mean Phillip likes it, Jamie likes it. I like it.
Dotty: Let me tell you something, if God had wanted us to live outside, he would not have created architects! (Odds on a Dead Pigeon) 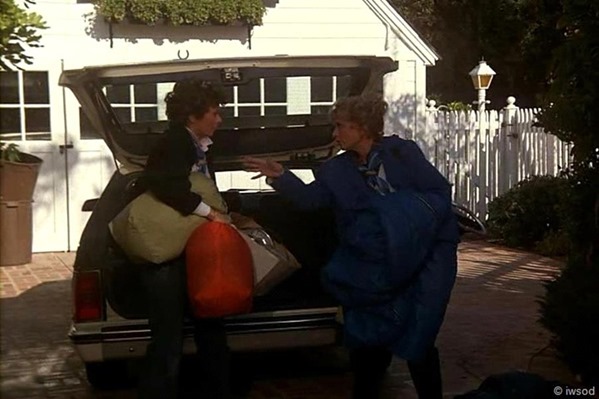 She tries hard though – Dotty (instructing the boys on putting up a tent): Tie the retaining cord firmly to eyelet “C”,attaching the end to peg “H” and driving it securely in place (Playing Possum). 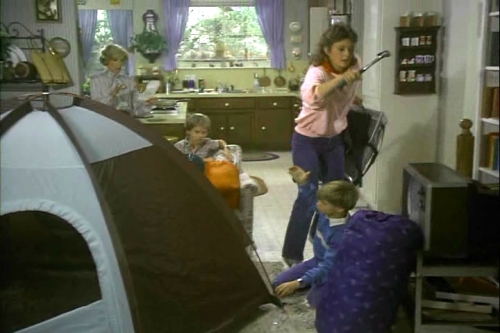 However, fortunately for Amanda’s burgeoning career and developing relationship with Lee, she took a lot of trips

–  Dotty: It’s the first time in two days that I haven’t skewered something to a stick and hung it over a campfire (Weekend) – but preferred a hotel (even though her stay was the result of a ‘break-in’

Dotty: I hate to give up room service, but it is nice to be home (Odds on a Dead Pigeon).

The family trip to Munich (winning a ‘contest’ engineered by the Agency) is more to her taste. She relishes writing a postcode to a certain Beatrice Norton who she can’t stand – Dotty: That is why I’m writing her, telling her that I won a contest, sending my whole family to Munich. That’s why I’m doing it. She’ll be so terribly jealous. I mean, you don’t mind if I tell a little white lie and say that I won the contest? …I’m also telling her that you’re engaged to a baron.

In Munich, in addition to provoking Beatrice, Dotty wanted to go shopping (Dotty: The glockenspiel is so beautiful… But so are the stores…Let’s go shopping, come on (The Times they are a’ Changin’). 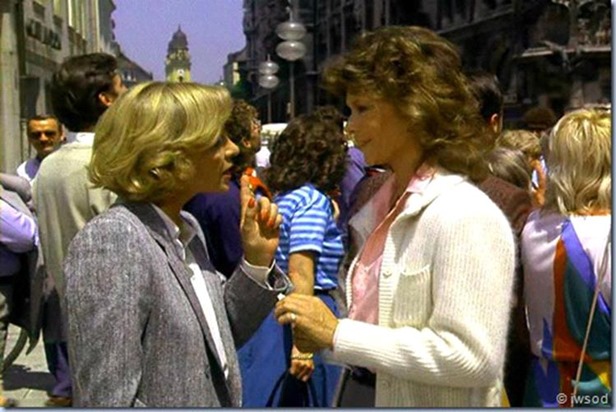 Despite her enjoyment of Munich, she isn’t interested in foreign food, for example the “authentic Czechoslovakian dinner” of talankacrea, posena poso sayzilo and skobunkey (Spiderweb). Dotty: I have no sense of adventure, when it comes to my stomach! (Spiderweb).

When we first meet Dotty, she can’t drive. As the series progresses, she has driving lessons but she appears to be more confident about her skills than her unfortunate driving instructor, Howard. Dotty: You see, Howard…Howard says that my problem is that I’m nervous, which is absolutely very strange because I am the least nervous person around. Actually, it is Howard that is nervous. I mean, he sits there straight as a board with his fist just clenched through the whole lesson! Now, the next time he does that, I am going to tell him to take deep breathing exercises. (Waiting for Godorsky) 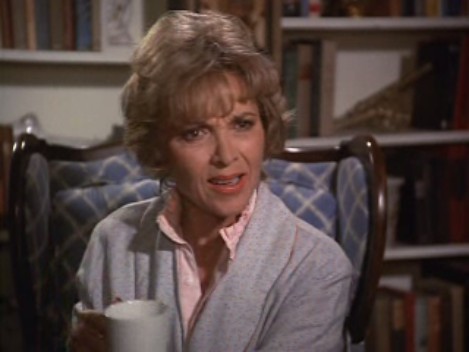 Unfortunately, the deep breathing exercises aren’t enough. She rides the break, goes too fast and then drives along the middle of the road, according to the hapless Howard. 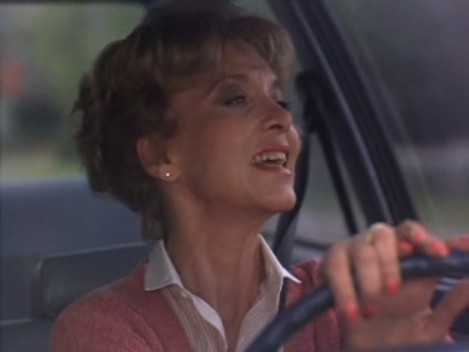 Finally, Dotty reverses into an intersection 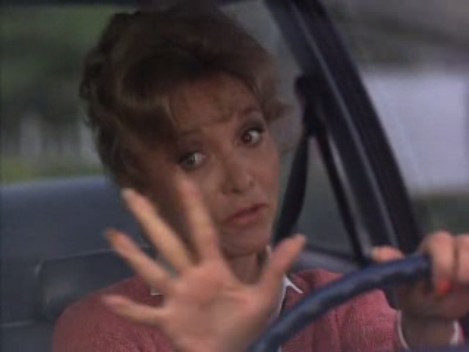 and crashes into a dumpster, causing complete chaos and delaying the bad guys. 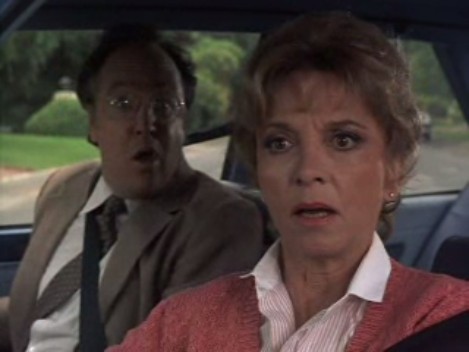 Dotty: Oh. I’m so sorry! I never even saw you there! 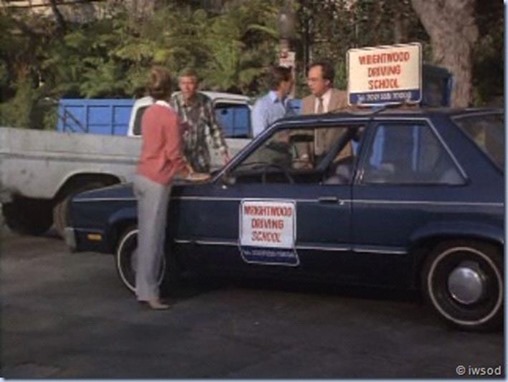 Dotty tries to save the world

Dotty is an advocate for her neighbours in trouble – Dotty: Oh, Amanda, that’s awful! Oh, it makes you so mad when things like that happen in your own neighbourhood! Now, we’re not gonna just stand here and allow it to happen. I’m going to call our councilman. What’s his name?…I’ve got his number (Brunettes are in)

…and for the consumer – Dotty (in the grocery store): All right, what about this one? Well, now, see? This one doesn’t even have a price. I mean, oh it makes me so mad. Now that they’ve got new cash registers that do the reading, they do not put the price on the individual box. I mean, I really don’t like that. I am going to write a letter (Ship of Spies). It seems that her letter didn’t help us 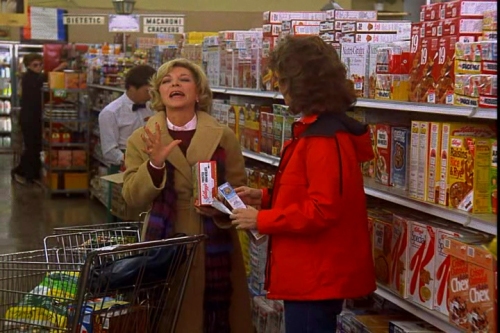 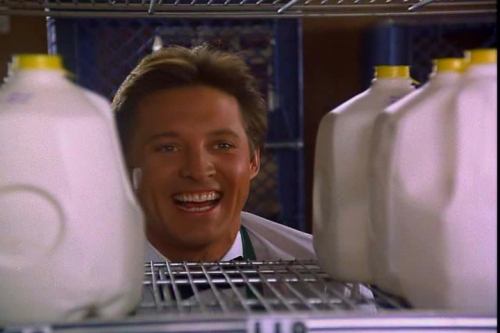 …and a gratuitous shot of Lee among the milk containers while Dotty has her price rant.

Dotty and her men

Dotty appears to have her fair share of encounters with men, despite living with her daughter and two grandsons. She is apparently no stranger to temptation (You know, I understand temptation. I mean, when I lived in Topeka, there was a vacuum salesman with the longest eyelashes… – Magic Bus) – TMI, Dotty! 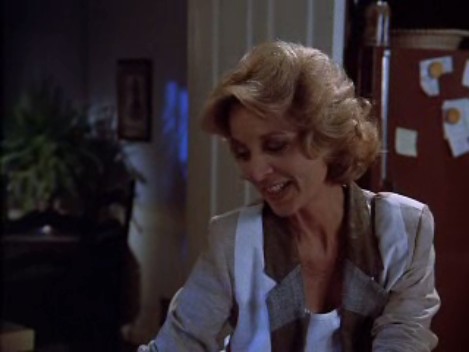 Up to early season three, the only one of Dotty’s men that we hear about in detail is Fred, the chiropodist who apparently tells Dotty that feet are erogenous zones (The ACM Kid). As Dotty says:…Fred and I have determined that I carry a lot of passion in my arches. Fred says that:…feet strangle in shoes. He recommends letting them breathe until at least noon. We hear that Fred trips over a skateboard (maybe he didn’t let his feet breathe until noon

) in If Thoughts Could Kill and then he disappears…

To Amanda’s horror, she makes a purchase from ‘Rebecca’s Fantasies’ for a weekend with Hunter Conrad (Amanda: Daddy’s old fishing buddy??? – Over the Limit ) Dotty’s response?: I’m also an adult. And a woman…With interests, needs. You’re my daughter.… when I ask you questions like this you tell me not to.

Dotty’s love life gets more exciting from the middle of season three, but that’s a post for the future..

Dotty’s tips on friendship and men

Before I close off this post, here’s a selection of ‘wise words’ from Dotty:

Dotty: Well, just remember one thing, darling. Life is short. If I were you, I would tell Dean exactly how I feel (Lost and Found) – oops, Dotty is a bit confused about which man Amanda is thinking about. 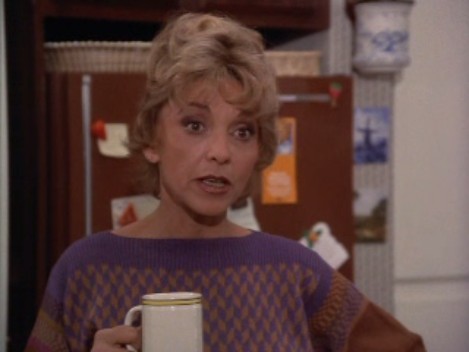 Dotty: A best friend is a friend that doesn’t meddle. That’s what they say. Of course, I was never very good at not meddling myself. I always felt, well, an obligation, you know, an obligation to help (Saviour).

Dotty:…he should have spent less money on portraits of himself and more money on life insurance premiums. I mean, there is no reason for a lovely lady like that to be left destitute (Waiting for Godorsky). 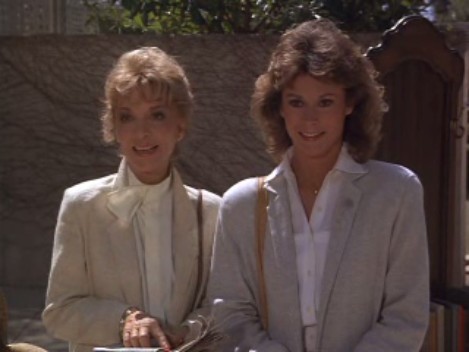 Dotty:…A wealthy man like…that is not going to announce his loneliness, He’s too proud! Successful men do not like to admit they have failed at love (Charity Begins at Home)

And an unwise word from Dotty to end off: Dotty: That’s either a very cold Peeping Tom, or it’s our next door neighbour.… 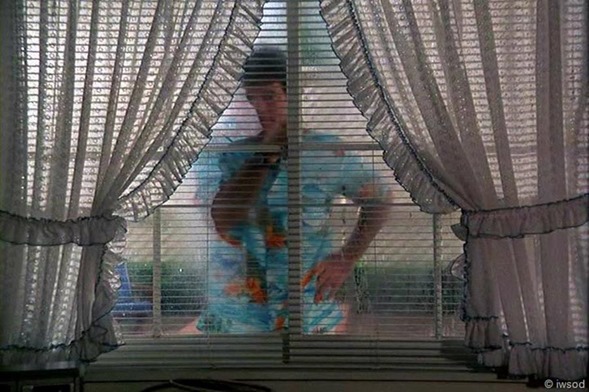 …how rude of him to look through this window!…Mrs Gilstrap said he was a statistician. (Tail of a Dancing Weasel).  I take exception to that on behalf of statisticians everywhere – I work with them and, while *not* the life and soul of a party, they are generally nice people and wear a lot of discreet black. But I won’t hold it against you, Dotty

I hope you’ve enjoyed immersing yourself in Dotty. In the next post, we’ll explore Dotty’s thoughts on Amanda and relationships in general.
bye,
Learjet.

This entry was posted in Character Discussion and tagged Scarecrow and Mrs King, SMK. Bookmark the permalink.

32 responses to “1/2 Dauntless Dotty by Learjet”