Sooo where’s the deadly wine at this point? Forgotten all about it like me?! It’s on the back of knucklehead’s truck!
We find Knucklehead on a public telephone: no. no. You, you go get it. You go get it. I’m not going back there….
[who is he talking to? is it a baddie? or are we not suppose to care? whatev.. it’s probably his mum!!!

(In the background we see the long suffering boss pull up)
…I mean, that guy grabbed me, he grabbed me by the knuckles…

…and I’m not going back there….
(He grabbed knucklehead? he did not!! what a loser knucklehead is- he’s all talk!)
…Whoa, whoa, whoa, whoa, whoa. Guess who’s here… (We see the boss pull up next to Knucklehead’s truck and open his door)
…Yeah. yeah, he just pulled up…
(the boss takes the case of wine out of the truck and puts it into his van)

…Alright. Yeah. Yeah, sure….
(LOL this knucklehead is such a wimp! He doesn’t yell to the boss or anything.. he just says this all under his breath. Wimp!) …You take it… He can have his damn job…. Have a good life… [Have a good life?! Ouch!!! Man that’s gotta hurt!] 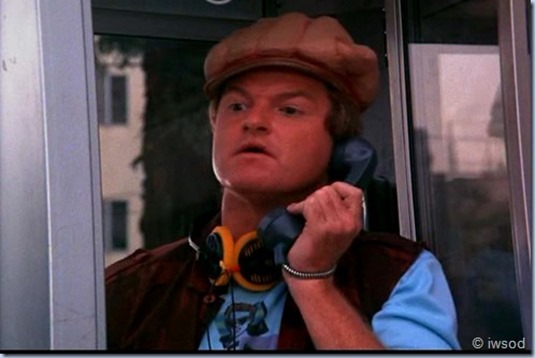 …Guy’s a real psycho… Hello, appreciate it, you. Same to you, cowboy!

Knucklehead salutes the boss as his van drives away.
[Ahhh a final insult- He salutes the cowboy?! whahahahaa!!! What an absolute wimp! he was a rubbish employee anyway.. good riddance knucklehead!] Did anyone really like Knucklehead? as far as guests go he is not so bad.. but without his hat I’m sure I would have been disliking him even more ha!

Back to Amanda’s and Dotty is mopping the floor while chatting with Buck..
Dotty: Buck, you cannot just rent sawhorses and block up the whole street!…

…And with those search lights, you’re gonna have people coming from all over town.

Buck: That’s the idea, Dot. It’s a party.
[I kinda like how Buck calls her Dot tee hee]
(We hear Amanda arrive home in her wine soaked white outfit.. she tries to sneak upstairs but Dotty notices her. drat!) 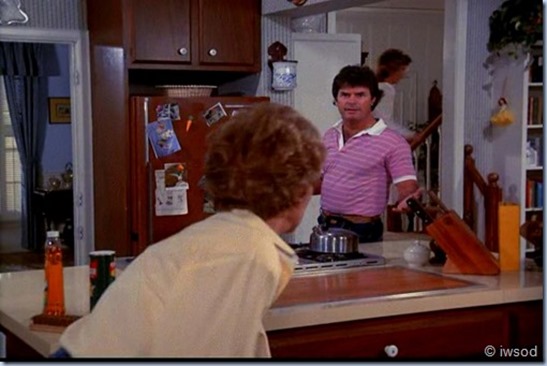 Dotty: Amanda! I want you- What in the world happened to you?

Amanda: Nothing. A little accident at work. Buck, the street looks like a prison yard after a riot. 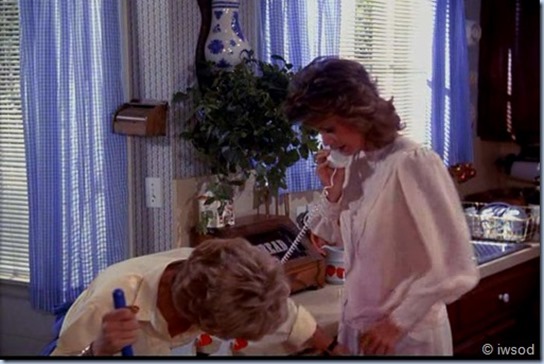 …Uh, ha, ha. (Amanda listens to Penny) What? Uh, sure, I could probably be there in half an hour… 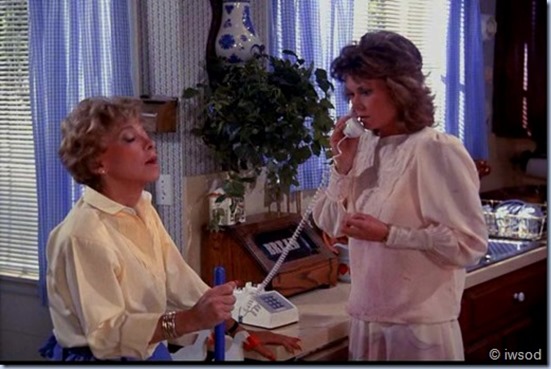 (Dotty reacts to this, she’s not happy about Amanda heading out again? why? Hmm..)
…Okay. Alright, don’t worry, bye-bye. (hangs up phone) …Just a friend from work, Mother. I, I’ll probably explain later.
Dotty: Sure you will. [LOL love how it’s now ‘I’ll probably explain later’ and not ‘I’ll explain later’ – that trick is finished! and Dotty seems to know she’ll never have anything explained.. is that why she seems unimpressed with Amanda rushing off again? hmm..]

As Amanda rushes off upstairs to change and go.. Buck’s preoccupied with his party.. as usual!
Buck: Prison yard?

Moving on.. Amanda drives to Penny’s.. soooo was Amanda originally going to get changed and head back to the agency to meet Lee at Penny’s? Lee mentioned as they left Escoffier that they should check up on Penny- but it seems no one actually had plans to. LOL. Phew.. good thing Penny called

Amanda arrives to find lots of Police there. Amanda rushes from her car to the mansion, and we see Jean Pierre is following Amanda. [Hmm interesting.. so he must know where Amanda lives- eek!  hmm why didn’t he follow Lee? I know I would.. hoo haaa]
Amanda finds an upset Penny at the entrance..
Amanda: Alright. Okay, calm down. Now, what’s the matter? 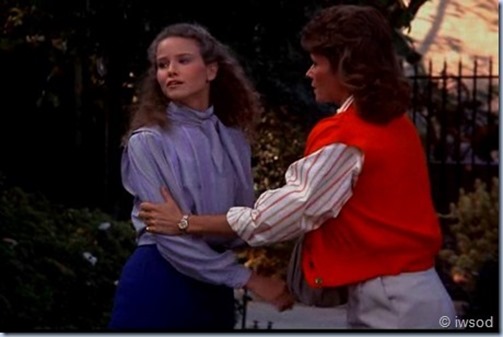 Penny: The police are here again. They’re tearing the house apart. They said that Daddy might have something to do with drugs.

Amanda: Okay. We’re gonna call Lee and find out what this is all about.

[Call Lee and find out what this is about? but doesn’t Amanda already know? Hmm.. I can only guess this is Amanda playing dumb here – so she can stall Penny, and keep her trust.. Amanda knows why drugs are suspected- but I guess she can’t yet confirm it to Penny.. anyone?]
On to IFF, and we find Lee watching surveillance video of McNeil carrying the wine case.

Billy: We got these an hour ago from Paris, the same time that Lamberson and his people got them…

…Now, the guy with McNeil in the black coat is Armand LeCoste, the Camel Man…

…He earned that moniker when he was caught smuggling heroin in the stomachs of camels.
[Is it just me or is ‘the camel man’ a really lame nickname?! I think ‘Camel guts’ would have been much more edgy

Any other ideas?!]
Francine joins Billy and Lee..
Francine: Big news. The Camel Man was busted in Marseilles last night… 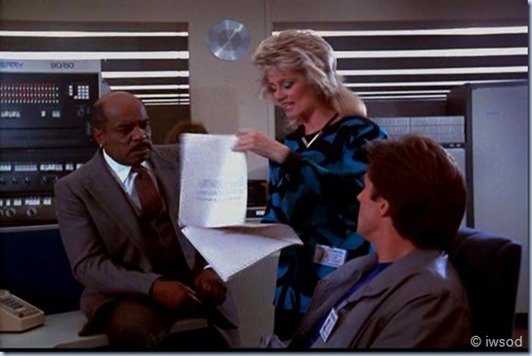 …McNeil brought the heroin-laced wine into the United States, right? But apparently, he thought he was doing some sort of a harmless favor by VIPing it through for Jean Pierre. So, probably, when he got both cases home, he confused his wine with the bad stuff.

[there you go.. plot premise explained

]
Lee: Well, Jean Pierre didn’t organize this plan himself. I want to talk to Lamberson before he locks him up. 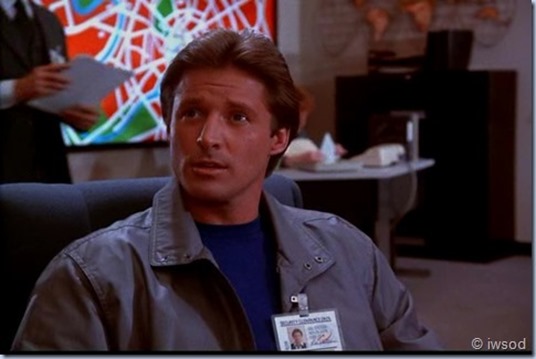 Billy: Well, jump on it, Scarecrow. We’re losing the race against time and the press. And, I want this case nailed down before they get their claws into it.

[‘Case nailed down?!!!’ what a fabulous pun!! We’ve seen the (wine) case get nailed down twice this episode already

Whahahahaaaa!]
Lee: You got it. 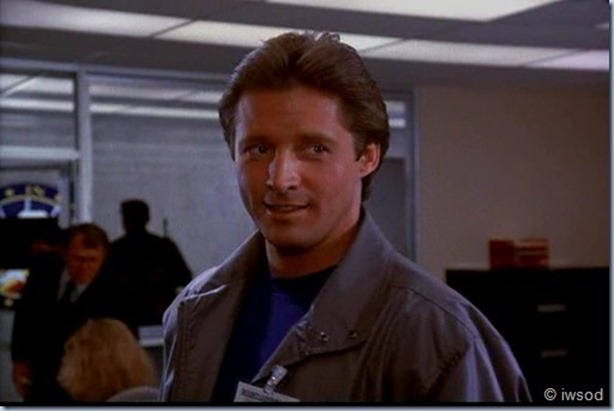 Lee walks off.. Billy does too -Leaving Francine to answer the ringing phone.
Francine: Hello?… Uh,yeah, just a minute. 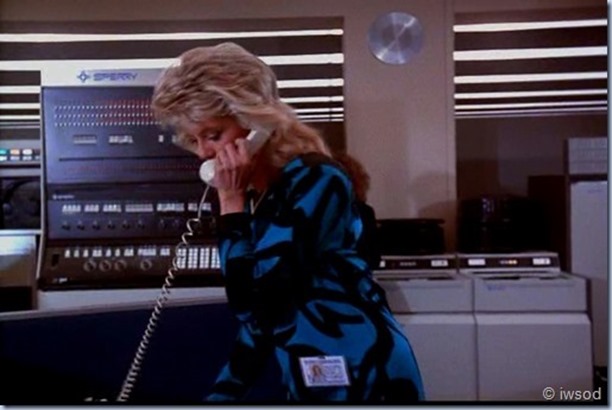 [Is it just me or is this outfit ghastly?!]
Francine calls out to Billy: Billy! It’s Amanda looking for Lee. 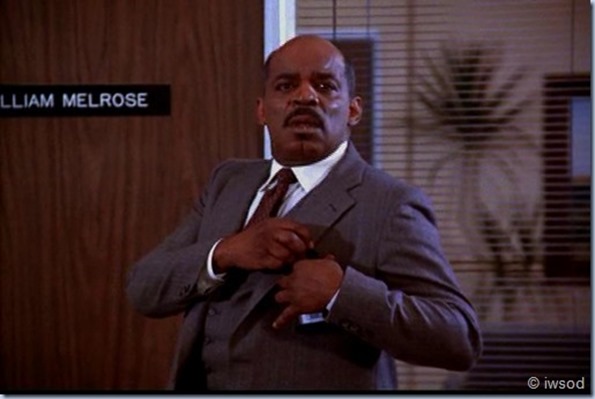 Billy walks to his office answering: I’ll take it in here.

Okay, I need to stop here for the moment! So how are you all hanging in there with this plot??!!! Everyone following where the wine case is?! or anyone not care and never have cared??!!  Sow what did you all make of Knucklehead? and.. ‘the camel man’?! tee hee..
As always – can’t wait to hear from ya!