Back to the McNeil mansion and we see the bonded courier van, driven by the boss pull up out the front of the mansion.
Amanda is reassuring Penny as she walks back to her car.
Amanda: Alright. Now, Mr Melrose said he would call as soon as he knows anything.

The courier approaches them: Excuse me, ladies. This the Twillie residence?

Penny: Twillie? No, this is Congressman McNeil’s house. 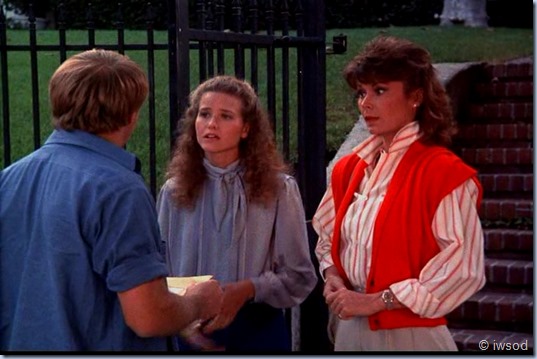 Courier: Another screw up! I’ve got a registered delivery receipt for a Mr Twillie for this address.
Amanda: Oh, well, you know, Twillie, that was a W.C. Fields character in My Little Chicka…

(Amanda reaches out to look at the receipt)

[Interesting that the receipt actually lists McNeil as the sender – that should have given a clue that this may be the right place no? The receipt has something to do with McNeil!
I guess this also explains the whole knuckleheaded Knucklehead subplot – if he hadn’t been fired, he would have simply returned the receipt like he was instructed to (when he felt like it!) and there would have been no need for Amanda to figure anything out – Knucklehead knew McNeil was Twillie.
I digress.. how you all going with this plot? doin okay?
Writing it all down this time I feel I’m finally getting my head around it! ]
Amanda has a realisation: It’s the wine.

Penny (off camera): My dad’s wine?

Amanda hands back the receipt to the courier, who is thinking he has the wrong address. [Hmm you’d think Amanda would have kept it! evidence!!! but nope she gives it back and never tells him it’s the right address! 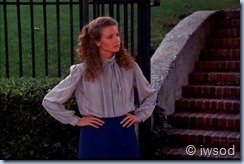 Penny is left a bit frustrated and confused.. lol hang in there Penny

uh oh.. Amanda drives away, followed by le baddie, Jean Pierre. Amanda stops at a stop sign and spies him in her magic side view mirror (probably agency issue!) which not only shows the side view,…

but magnifies it many many times so we can see Jean Pierre doing his special baddie face..

whoa! now that’s funny!
Good on Amanda for spotting him though.. she takes off and tries to evade him..  cue lots of

rofl! see Jean Pierre sticking his head out the window looking for Amanda?? 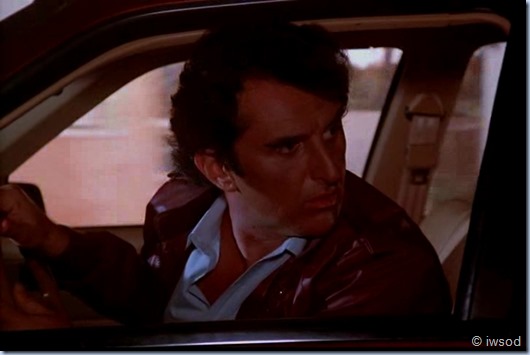 now that looks real! not!!! yep, that man reeeeally is driving that car in broad daylight.. ahem…

Clever professional Amanda! she rushed into an underground entrance of some kind to lose him.. and not only that.. she reverses out again and follows Jean Pierre.. you go girl! 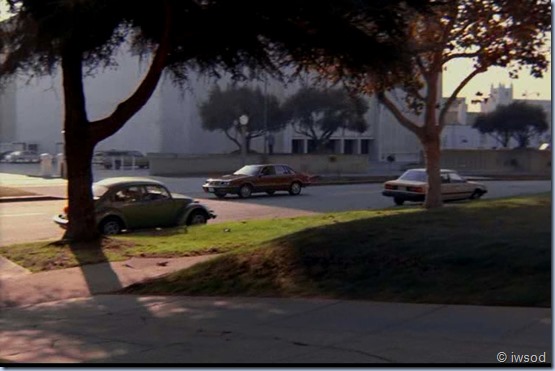 she follows him back to Escoffier America.. Ah see now this is what the front street of Escoffier looks like! 😉 Jean Pierre pulls into the drive way and drives down the side of the building to the back entrance.

Are we really suppose to believe this is the side of this house??!! [Aie!!! now there is a rabbit hole! I swear if anyone loves picking apart locations you could have a field day!]

Amanda’s turn to drive down the magically transforming driveway.. 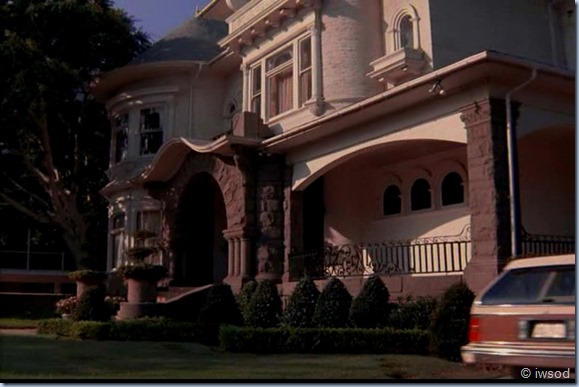 Don’t drive down the alley!! ugh!!
hmmm maybe you should have parked out the front and down the road a bit Amanda.. I mean Jean Pierre knows what your car looks like! (There’s even a ‘no parking in alley’ warning!) 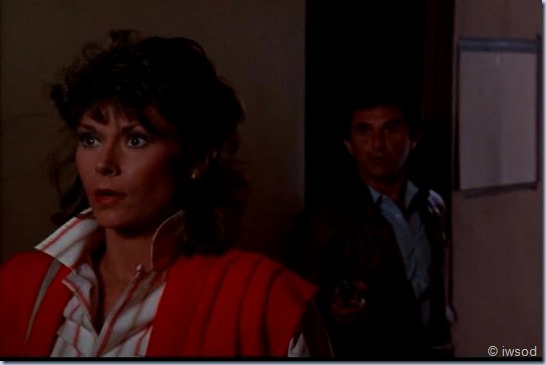 Amanda doesn’t answer.. and Jean Pierre just shoves her in the direction he wants her to walk. 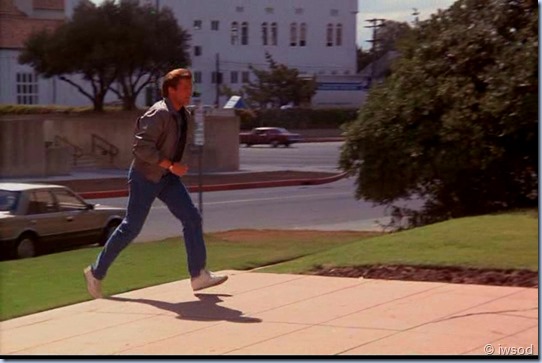 Ahh see now if Amanda had parked out the front, Lee would know Amanda is there!
Lee rings the doorbell and is greeted by the Butler.
Butler: Ah, Mr. Peterson. May I help you, sir?
Lee: Yes, I certainly hope so. I’m looking for Jean Pierre Henri. 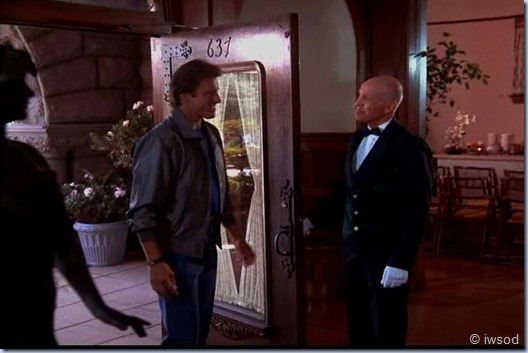 Lee walks into the foyer and looks around. There seems to be a dinner in progress.

Butler: Oh, I haven’t seen Mr Henri in sometime. If he is in the building, he most probably is in the cellar. If you wish, I could check.

Lee: No, no. I’ll do it myself. I know the way. Thank you.
Lee heads down to the cellar himself..
By the way – the Butler?? He’s been in smk before!!! Anyone else notice him? do tell!
Hmm I wonder if he recognises Lee –ahem! Looks like he has changed employer – seems once Godorsky arrived Countess Valoskia no longer needed her butler!
Here he is in Waiting for Godorsky:

Here’s a close up:

[This is when he opens the door to Lee and Amanda, as a good butler should

Back to Jean Pierre trying to figure out what to do with Amanda! I think he’s not a natural born baddie! 😉
Jean Pierre is on the telephone talking to someone: We have a problem…. The woman’s here with me…. Why is not important. Just get over here. 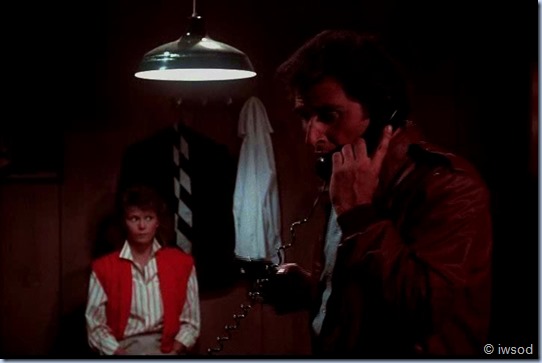 He hangs up. [I guess we are left to wonder, was he talking to Cecilia? or could it be Robison?]
To Amanda: Now, who the hell are you?
Amanda: I’ve already told you. My name is

Lilly Peterson. I’m from Hillsborough, New York. My husband is in computer soft-
[I’m sorry did Amanda say something important? I heard ‘my husband’ and my mind just went zippo.. casa de nada..] 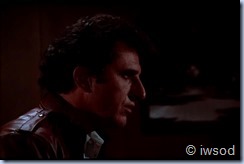 (As Jean Pierre continues to talk we cut to Lee sneaking outside the door- go Lee!)
…I want to know who you’re working for. Right now!!

Lee hears Amanda respond: You have my identification. My name is Lilly Peterson.
[I love that Amanda doesn’t know Lee is about to help her- she’s being brave and sticking to her cover!!! Go Amanda!! and Lee gets to hear for himself what a trooper Amanda is- and how she is doing a good job sticking to her cover

]
Lee knocks on the door.
Jean Pierre: Who is it? 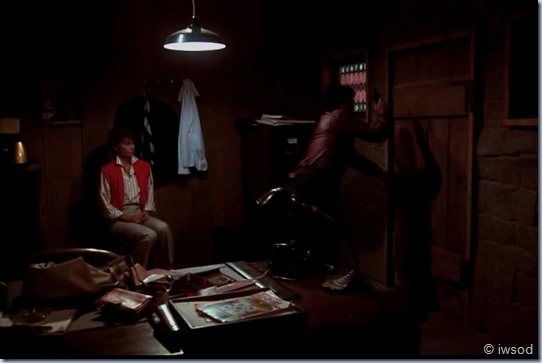 We cut back to the room where Amanda is being held to see Jean Pierre open the door slightly- aiming to peek around the door.. but Lee rams the door open and sends Jean Pierre flying across the room. Jean Pierre drops his gun. Amateur! I suspect Jean Pierre is more of a lover than a fighter

Lee finishes him off easily with one punch to the guts!
Amanda: What are you doing here?

Lee: What the hell are you doing here?
[I love how they both ask this! but Lee adds ‘hell’! lol!!] 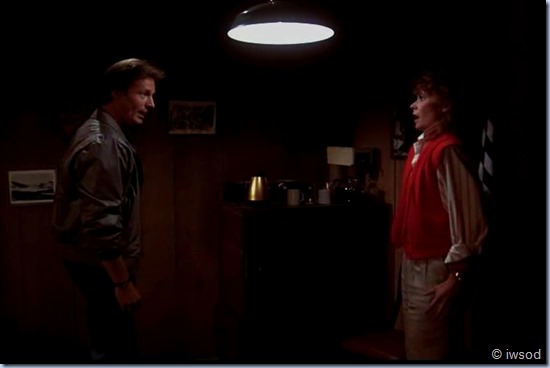 Amanda: Oh, listen, it wasn’t my fault. He was following me, and, so, you know, I did what the agency training manual said to do. I lost him.
Lee: What?

Amanda: And, then, I thought I’d better figure

out why he’s following me so I followed him. And he must’ve executed a pretty good double cut-back reversal because he caught me.
[I think it was the magical reality altering alley 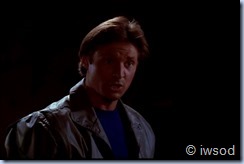 way that did her in..]
Lee: Amanda, that was crazy. You know that? Crazy. Now…
Amanda: Look, it didn’t seem dangerous at the time. I had no idea I was going to end up in a wi…
Jean Pierre moans loudly… 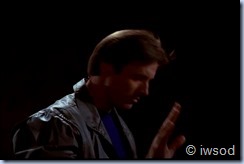 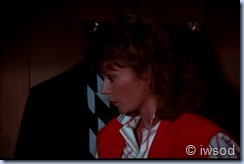 Lee holds up his hand to motion to Amanda to stop talking as Jean Pierre is waking up.
Lee: Shh. Alright, my friend, come on. Let’s go… 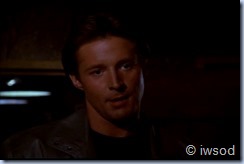 …Now, the Camel Man was picked up yesterday. He’s been doing a lot of talking…

(we cut back to Jean Pierre, and Lee suddenly has Jean Pierre’s gun pointed at Jean Pierre’s shoulder! magic!! Lee dragged Jean Pierre up off the floor with two hands..I think this is a blooper)

… About you. Now it’s your turn…
(Outside the room, we see someone sneaking up on them)

Lee continues: Come on, Jean Pierre, you’re a bad sommelier and an even worse crook…

[oh boy.. what a line!! The ultimate insult? you aren’t even a good sommelier! ]
…Who you working with?
[He’s working with a bad cook who’s an even worse crook! whahahaa!]
Oh and LOL! There goes Lee with his commanding interrogation technique! He demands answers straight up! 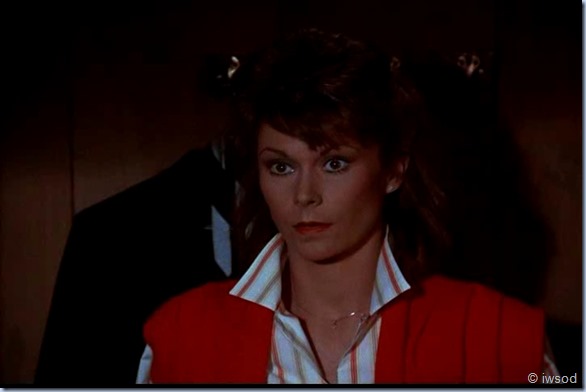 Jean Pierre: Umm, I must have immunity.
[I love how breathless and in pain Jean Pierre sounds – like he’s done 10 rounds.. only.. Lee punched him once in the stomach! rofl!!]
Another view of the approaching shadow.. holding a gun.. 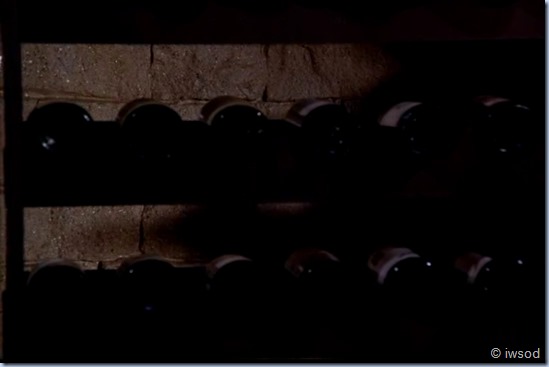 Lee: I’m sorry, that’s not my side of the table. I can’t make those kind of promises.

Rofl! Lee has nothing to bargain with!! But.. still expects baddies to spill.. ah bless him! 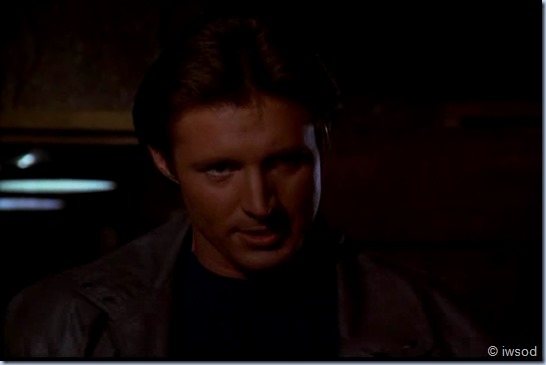 Jean Pierre: Alright. Alright. I do have a partner.

[that was easy! ]
Uh oh..The mysterious partner approaches and aims the gun.

(heck, it’s obvious it’s Cecilia isn’t it.. he said he has ‘a partner’, not a couple and we already know he is working with Cecilia – not to mention the lovely bright blue sleeve there that gives it away.)
Cecilia shoots Jean Pierre- and stops him from revealing her identity.
LOL the look on Jean Pierre’s face is hilarious! [like he just drank heroin laced wine?!] 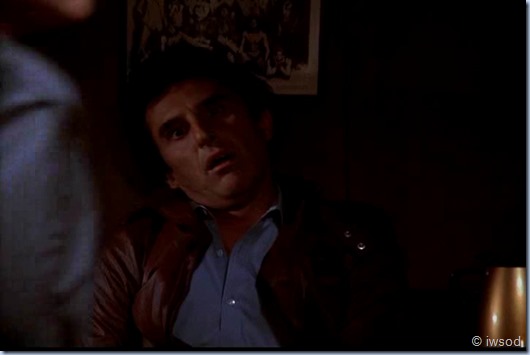 [Jean Pierre is so stooopid. He knew his partner was on their way – he just called them and told them to come!]
hooo haaaa.. Lee immediately rushes to cover Amanda..

[looks like the label on the back of Lee’s jeans has been taken off- wouldn’t it have been hilarious if it had been ‘Lee’ jeans?!] 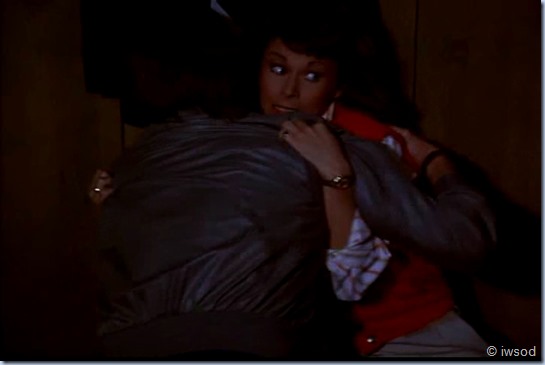 ]
Ahhh.. once again Amanda is in Lee’s arms!! 😉
They realise the shooting has stopped and the gunman has started running away.. so they come up for air.. swoony!

Lee: Alright, now what do I always tell you to do?

Amanda: Wait here.
Lee: Right.
[Trouble is Lee – Amanda never listens to you!  I do love the reference to that long running gag though.. it’s a beauty! And this time,  ironically, she does seem to stay where she is told too!]

Lee leaves in a hurry, chasing Cecilia (not that he knows it’s a ‘her’ he doesn’t).

His chase ends upstairs back in the foyer when he surprises the dinner guests by running in with his gun drawn.
Lee: Hey, a guy came through here with a gun. Which way did he go? 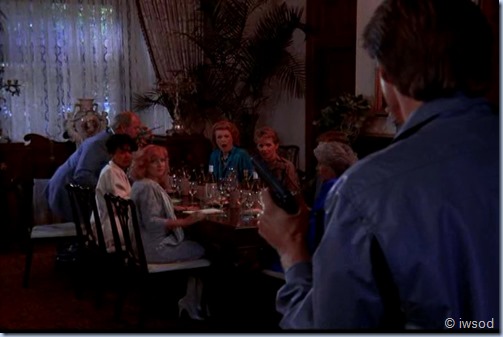 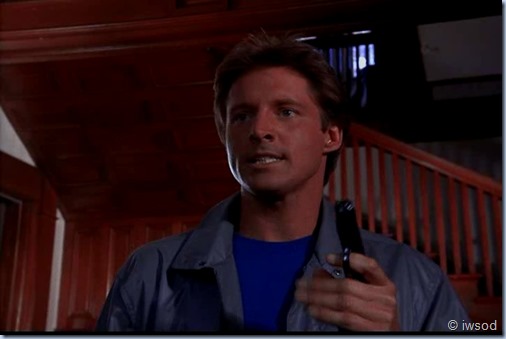 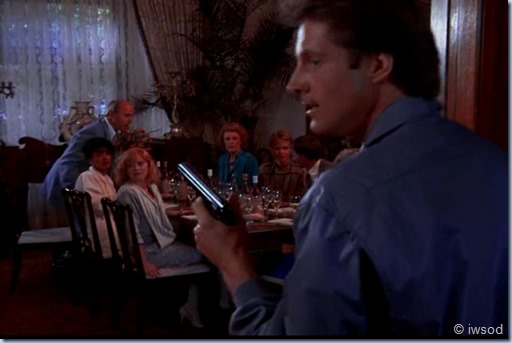 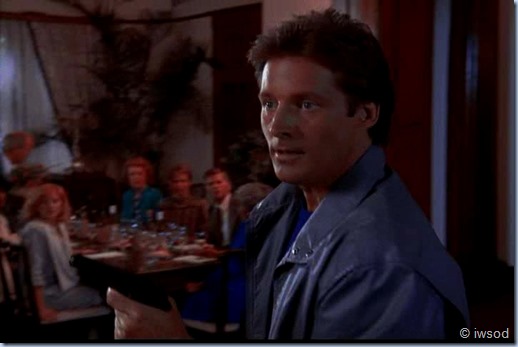 I really thought one of the guest might suggest the Butler did it!

A missed opportunity!
Lee is lookin good huh! I can ignore the jacket happily!
These poor guests are freaked out! [probably by the gun, not the jacket

] lol!
Lee looks around realising he has lost the baddie. 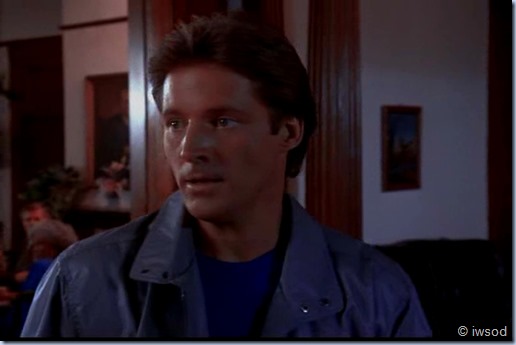 The scene ends here.. so I will too! I can’t wait to hear what you all make of this episode so far.. you all following what’s happening with the cases? That’s  the wine case, and the criminal case?! Feel free to ask (or complain or praise) away!  Lovin all the clinging Lee and Amanda are getting up to!