Back again!!! and we are all anxious to learn who the mystery bidder is!! Not!

[LOL make that.. who the dumb mystery bidder is! I mean really – the bidder could have paid a third party to bid on their behalf – they let bidders stay anonymous all the time.. ridiculous! ahhh smk love ya!! 😉 ]

The bidder walks over to claim her wine case and pay.. [It looks funny to me that Lee stays up on the balcony and motions like that- why? Anyone??
Is he trying to tell Amanda to stay where she is? and she doesn’t notice?? Or is it him motioning to stop the baddie? what do you all make of this?] 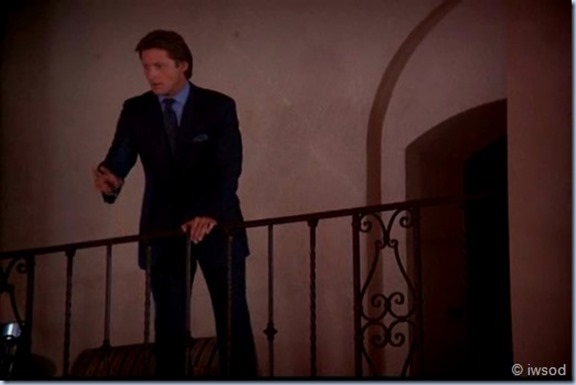 The winning baddie bidder is intercepted by Billy. 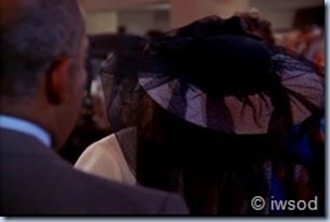 Billy: I’m afraid you’ll have to come with us.
Billy shows her his ID (whoo and he has a badge!!) 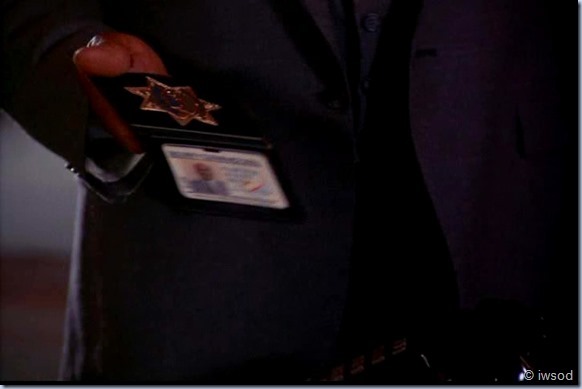 watching this for the first time?!

)
isn’t going quietly, She grabs Amanda who is standing nearby and holds a gun on her.
Cecilia: Don’t anyone move.  Or she’s dead. 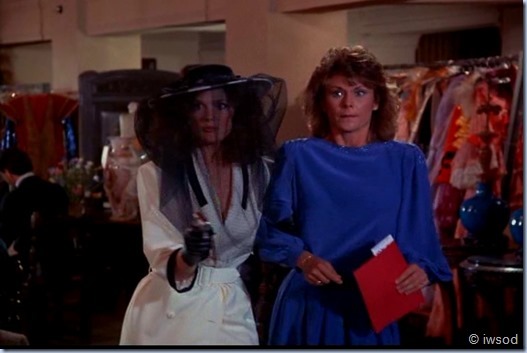 Billy: Please stay calm… (long pause) …Everyone, stay calm… (Cecilia starts backing up.. gun still pointing at Amanda.. So good of her- yes this will help Lee to jump down and nab you nicely! thanks!!) …Don’t move. Do exactly as she says. 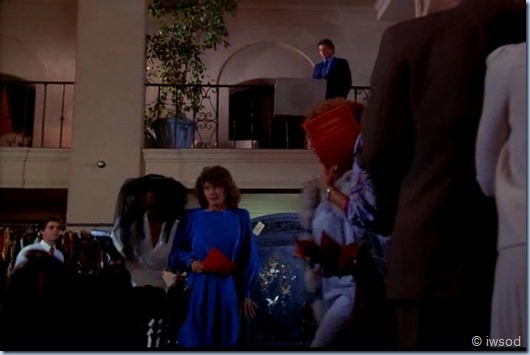 Someone in the crowd spooks Cecilia, she turns suddenly as a bunch of wine bottles gets knocked over – Amanda gives distracted Cecilia a shove and Lee seizes the opportunity and pounces! or flies.. take your pick.. I always giggle at a scarecrow behaving like a bird 😉
[Hey! Ceclilia!! that’s for making Amanda ‘volunteer’ back at Escoffier! ha!]

Whoo hoo!
Lee wrestles the gun away from her on the floor. 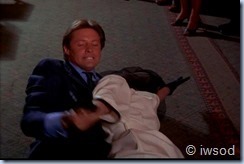 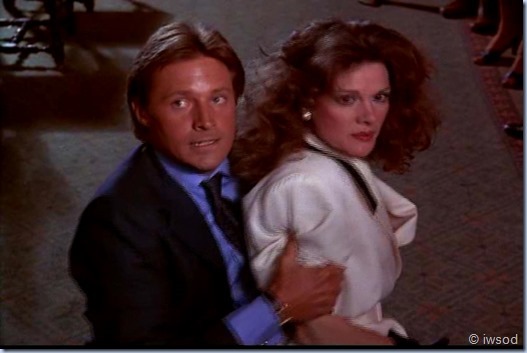 You look out Cecilia!! [oh dear and watch that gaping neckline!]
Lee: Come on!! [take that dirtbag downtown!]

So anyone shocked it was Cecilia?!!! whwhahahaha!

Back at Charity HQ, Francine and Billy lead cuffed Cecilia away – guess it’s their job to take her downtown (be afraid Cecilia, Francine really really really hates cooking personalities!) -I think she’s insulted Mrs Welch didn’t give her a cute historical American nickname 😉 Anyone want to have a go?!!

We find Amanda is talking on the phone as Lee looks at the ten bottles of Chateau Monet – yep.. the Auctioneer said there were ten! And Lee has missed it!
[I would have thought, given they know the bottles are deadly, that the moment Amanda worked out where they bottles were- they would have gone straight to Charity HQ to guard the wine.. or you know make sure no one takes any of the bottles and you know..like.. dies!!! ugh!! but nooo they just left them! and.. didn’t even count them.. but.. Lee does look really good in Blue.. aie! ]

Amanda: (on phone) Yes, sweetheart, put grandmother on the phone, will you?.. Yeah, put your grandma on the phone… Hi, Mother

Lee: Who could’ve known, huh? A respected chef on the board of Escoffier. Come on.

[Oi! Listen Pilgram Peach Puff,  she’s a professional chef! on smk they are all evil no?!

]
Amanda: Leeeeee, She nearly fried her croutons to a crisp…

…She obviously had her mind on something-
Amanda is cut short when her mother starts talking to her on the phone again. 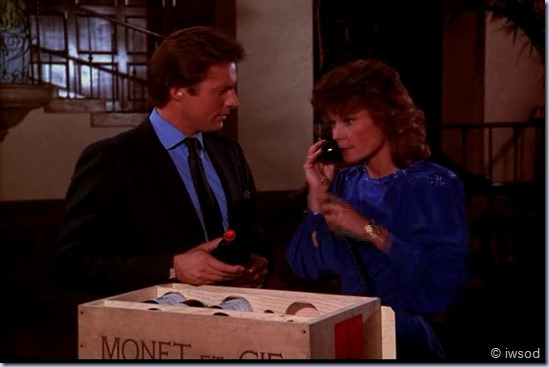 LOL! Again, Lee gives her one of those ‘what is she on about- wow she’s quite clever’ kind of looks he seems to be giving her a lot this episode!
Amanda: (on phone) Yes, Mother.
Lee (to himself): Croutons?!

Amanda hangs up the phone.
Uh oh.. here comes Jill!
[lol so does she know they are all agency now? Lee is not really a doctor?? after everything that has happened?! I mean she knew Amanda in real life.. that could get awkward no?!]

Jill: Well, that was certainly exciting. Wasn’t it?
Amanda: Huh.
[can I just pretend the next subplot doesn’t exist??!!!ugh..]
Lee: Yeah. I hope the auction made some money.
Jill: Oh, it was a fortune. Uh, but, the most fun was going to the White House. 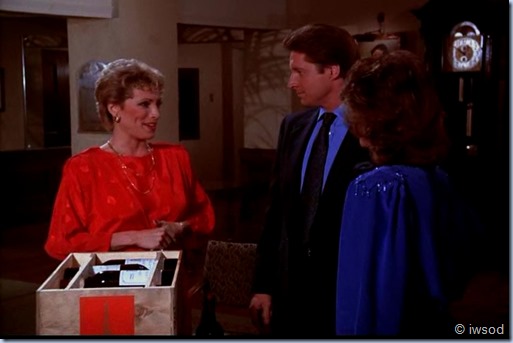 Amanda: On the way to the White House.
Love the crazy eyes Amanda does when she realises what’s happened.. Lee: Come on.
Lee and Amanda rush off without so much as a goodbye for Jill- whahahaa!
Man.. this is one weird episode.. it has a different vibe.. It’s like it has 2 or 3 endings one after the other.. we’re off to the White House now too?? ohhhh kaaaayyy..
Jill: What did I say?

[Thank you wardrobe dept- that you didn’t put Amanda in that outfit!!!]
Next thing we see the corvette speeding toward The White House – because see, no one else could possibly stop the president from drinking the Chateau Monet ‘45 it just has to be Lee and Amanda! 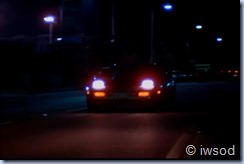 Lee: Dispatch. Patch me through to the White House. This is a Priority One emergency.

Lee calls the White House from the car?? so what’s the problem then! no need to go there Lee!!!..they’ll deal with it! they can read wine labels!!!! Why don’t you and Amanda go have a nice dinner somewhere instead, after all you are both all dressed up and lookin pretty! Afterwards…. maybe a bit of dancing…. no?
Gotta be Lee and Amanda at the end who personally save the day?…. Ok ok!
Next thing we see the White House Chef (whoo watch out for those chefs!

)
Chef: Well, the dining room captain told, uh, the pastry chef who passed the buck to me… [this is what they do with a ‘priority 1 emergency’ in the White House?!.. hmm I think they might have a problem! whahahaaa!!] ….I’d only think about the wine cellar and then during the confusion the valet came for the President’s glass of wine… [oh purlease!!! it has to go down to the wire.. I’m surprised they don’t have Lee whipping the glass from President’s lips!] … (Lee and Amanda rush in, with Lee flashing his badge) …Well, no one tells the President’s valet what to do.  [Yes not even when it might kill the President?!! whahahaha!! This subplot is so lame it’s funny!!]

Lee: Where is his valet?
Chef: Taking the President his nightly glass of wine. (how ironic that he whines as he says wine! 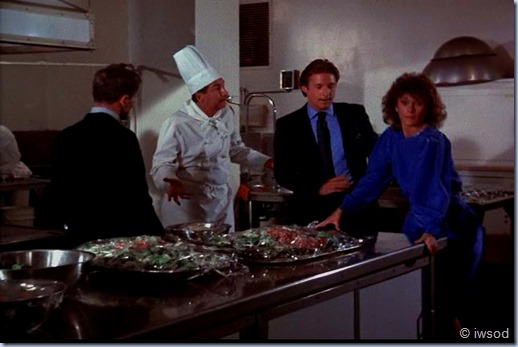 Lee and Amanda rush out of there to personally stop the president’s valet. Oh boy..  utterly ridiculous!

Did you recognise the Whiny Chef?? Pretty sure I was naughty back in A Relative Situation and mentioned he had two smk appearances. (this was before I got my head around the whole not looking forward thing so forgive me!) but..

Lee and Amanda intercept the Valet and the glass of red wine sitting on a lovely paper doiley – rofl!!!
Lee picks up the wine, while Amanda holds up Lee’s ID.. Do I have to cover this bit? I loathe it!!
Oh alright.. Debilyn has done all the lovely transcribing anyway!  [sorry to put you through this Debilyn! 😉 ]
Lee: Hold it.

Valet: I beg your pardon.
Lee: Did this come from a bottle of Chateau Monet?

Valet: Apparently, you are unaware of our President’s roots. He only drinks California wine.
[boy.. that gag doesn’t really translate.. I’ve since been explained this one.. but for me it falls totally flat – anyone like it?!]

A security guy comes running up the stairs

and tells Lee and Amanda: I found the Monet. It hasn’t been opened.
Lee: Ah. Wheew.

The security guy doesn’t hang around.. lol after all Lee and Amanda are suppose to save the day!  Amanda continues to hold up the ID in some weird way!

Ahhh a missed opportunity.. they really should have gone out to celebrate.. hmm but then again, Lee knows Amanda has to stop at the store for Dotty on the way home – could Lee have another way of ‘celebrating’ the (wine) case being closed?? errrr nailed down??!!! teee hee.. well, the tag is up next –
Then we’ll see!!!! and I’m sure we’ll Squeeeeeeeeeeeeeeeeeee!!!

Soooo what ya thinkin about this section of the ep everyone?! byeeee!!!