Still at IFF, and following Lee’s first meeting as the new Q bureau chief..
Francine: That’s a true leader, uh, yeah. He always saves the tough jobs for himself.

IMHO Francine has some Sour Grapes!!! Sour that she didn’t get the Q bureau.. sour that she isn’t the new chief and that here Lee seems to be her superior and giving her orders. Maybe also sour that Lee is choosing to take along Amanda as his partner too!

Hmm I wonder if that’s why Francine was being so catty earlier, because as our fellow smk fan Cindy likes to put it – it seems like someone has err done something to Francine’s cornflakes this morning!

I think Billy, Lee and Amanda have all had as much of Francine as they want to..
Billy: All right, give it [the gin mills on M street that is] …the once-over Scarecrow, then move on because we don’t have enough time for you spending it all on a barstool. 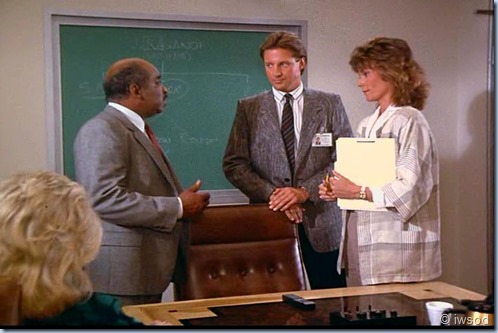 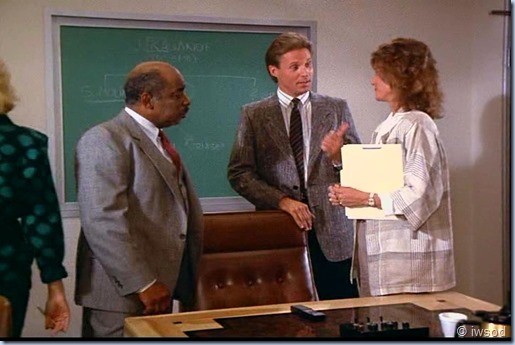 Francine joins them. Oh joy.. more digs, jibes and nastiness.. Francine you are so unprofessional so far I think you need a talking to!
Francine: Well … you’d better get hazardous duty pay, Amanda,…

…because M Street is kind of a combination of, uh,…

…tag-team wrestling and full contact karate.
[Interesting, we didn’t see Agnes leave the room- what would she make of Francine’s remarks about the gin mills on M street?!] 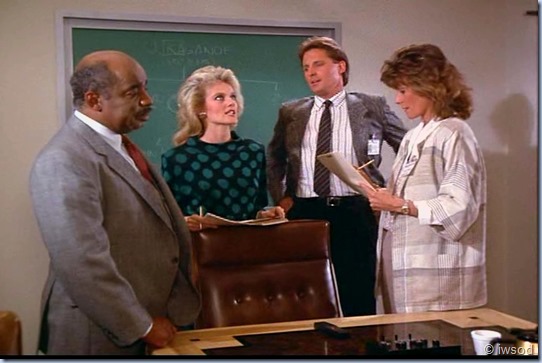 Amanda (deadpan, without looking up) responds to Francine: Do you know that first hand?… 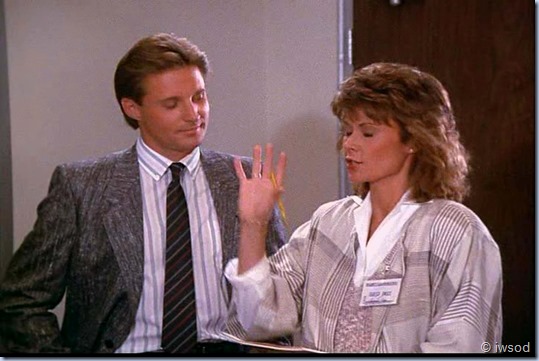 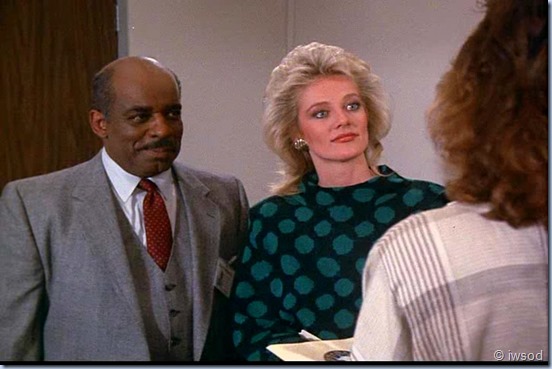 I think Billy, Lee and Amanda were happy for that zinger!!! whwhahahaa..

[Oh nooo! but.. drat.. Amanda backs down!!! Don’t back down Amanda!!!]
…I know you’ll get me back.
[Amanda has a go at you anyway… so what difference does it make???!! Go for it! ha!!
oh noooooo I always want to stop Amanda here.. I wish she didn’t try and take it back! Does anyone think this?? what do you all make of it??
Oh and anyone else thinking this works better before RFTSky? when Amanda gets the better of Francine? Or can it work after anyway??
Lee and Billy’s reactions are interesting. Lee seems to not want to get involved or make eye contact.. but Billy? He seems to love it even more when Amanda says she knows Francine will get back at her! wahhhaah

[I do like though that this is the best Francine can do!!! and I comfort myself that Amanda got the dig in at all.. and Billy seem to love it haaaaa! I like to think Lee likes it too but doesn’t want to add fuel to Francine’s fire! Billy? he can do what he wants

Francine walks out.. her dignity in tatters.. whahahahaaa…Actually now that I think about it..  it’s ironic that Amanda’s pleas to Francine to not get her back – actually just make Francine look really thin skinned and immature!!! well.. IMHO!!! [This thought makes me feel better that Amanda tried to take it back! 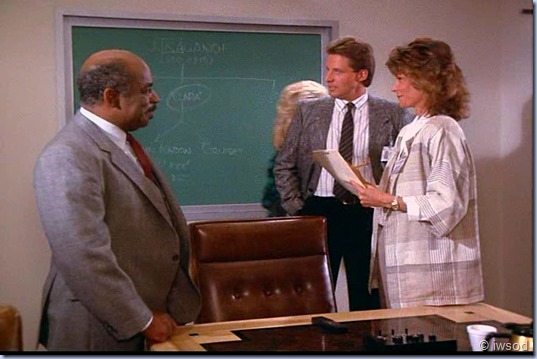 I only noticed this choosing the photo.. but as Francine heads for the door, Amanda is trying to suppress a grin!

And then.. not really suppressing! Haaa.. I’m liking this more and more!!! Amanda seems to be taking it back.. but not really meaning it haaaa

Amanda: I really am sorry.
[me thinks the lady doth protest too much!

because I really think Francine needed to put a sock in it!
The scene ends with Billy still loving Amanda’s dig at Francine.. even if Amanda half heartedly tried to take it back

Lee seems preoccupied with the case.. and he’s just staying out of it..

I love how we have the usual room full of agents, but only Lee, Amanda or Francine actually get a job to do.. the rest of them just leave-okay they handed out folders.. but… so what?! I guess Lee did say he wanted reports.. but we all know they don’t actually do anything.. they just head off to goofy golf!!

Oh and before we say bye to this scene.. what’s with the baddie hierarchy on the chalk board?? Is that some top secret info from a previous meeting? too funny!! [this image from earlier in the scene shows some of the names.]

the top name seems to be J. KAGANOF
do you think? what does it say in brackets under this name? anyone? another baddie on the left is S.MOLINSKI – what’s that all about?! anyone recognising the names? are these a play on well known names? anyone known by the name of J. Kagan that they’d want to spoof? weird.. Is this the first baddie hierarchy we’ve seen so far? lol I’m assuming they are baddies because they are Russian sounding names..

Moving on, we see the IFF building, and then… 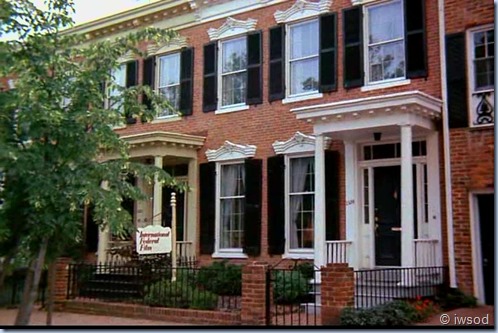 It pans in like this window is the Q bureau- I was thinking the Q bureau was above the garage entrance?

anyone?  kiwismh, you are the expert on interior spaces/layouts.. what do you think?! Or open question for anyone??
My goodness- when was the last time we saw the Q bureau? ALLA? [err that’s with my order sorry.. not airing order – last time we saw it with airing order was wizard I think]
Inside, we cut straight to this guy. 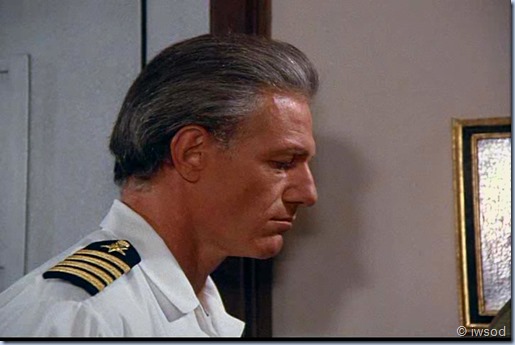 Has Lee suddenly grown old overnight with the pressures of his new leadership position?! Nah!

Ronson: The unnamed midshipmen in this Ledger article … I was one. (Ronson starts walking and talking..) …Nine months after that night, I was the father of a baby girl out of wedlock. Her name is Mary Austin. She’s never heard about me. She has a normal life… a man she thinks is her father.
(Oh phew.. we see Lee and he still looks like Lee.. for a second there I thought the older man looked like Lee!!! Does anyone else see a resemblance?!)

[What’s normal about thinking one man is your father, when really your father is someone else?! ]

Oh hang on.. so let me get this straight. Lee just had a meeting where he told Francine to go find out about this naked sailing photo..and here now in the next scene is one of those naked sailors? Why didn’t Lee go straight to M street? I wonder if this scene order is the same in the script ?? anyone?? Ohhh JWWM script consultants???

[sorry guys I’d look but I can’t give smk that much time anymore!! but hey- no reason any of you can check it out and let us know if you happen to have the time at the moment! ]
Lee: Does your wife know?
Ronson: Sure. Evelyn knows all about it. I’ve done everything I can to take care of my child. My responsibility, short of telling her…. 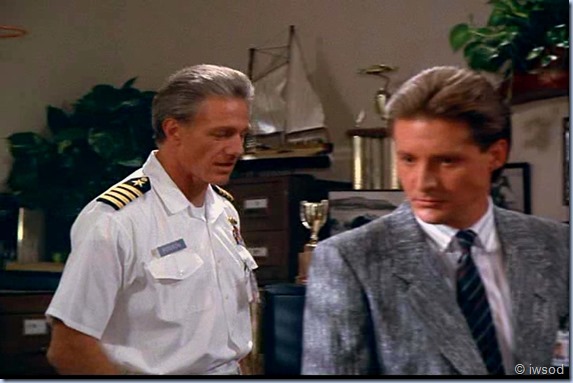 …But if this ever gets back to Mary…Why screw up her life?

Maybe it’s just me, but I suspect this is one of those plots that just doesn’t translate to this day and age. I can’t really get the logic of Ronson never being honest with his daughter. I understand maybe in the 60’s in the upper ranks or those looking to progress, that a child out of wedlock may have been seen as a sign of bad character back then. I guess? At least this is what smk seems to imply – that it was something that had to be hushed up… and Mary Austin would forever carry that stigma of being born out of wedlock.. but..with today’s eyes.. this seems very backward to me. It means I can’t really feel great admiration for this Ronson, because all I can see is he has lied to his daughter to save his butt.. Yeah he told his wife.. oh he is a good responsible guy.. ugh!! meh!!!
I guess because I don’t connect with that time- I just see Ronson as making excuses to justify his response to the out of wedlock pregnancy. okay.. I won’t ramble on anymore!!!!
I’m going to stop here for the moment.. before we get on to Lee’s questioning about leaks.. Anything you’d like to share on this section? or the episode so far? do tell!!! Again – huge thanks to KC for completing the transcription of this episode for Operation Sandstorm!!!