Lee continues his interview with Ronson in the Q bureau..
Lee: What about these other midshipmen?

Ohhh I see why I thought he looked like Lee.. He has Lee’s hair! I swear it looks exactly the same.. except for the colour that is..
Ronson: One of them commands a nuclear aircraft carrier, and another’s in Naval Intelligence.
[rofl so Lee gets to find out about the other sailors huh.. sooooo what’s Francine going to Annapolis for then?! Oh I know!! Lee lets her go anyway, so Francine can cool off and not try and get back at Amanda!

Lee: Where do you think an old story like this came from?
Ronson: The FBI report on the case was dropped—destroyed. The Navy intervened to have the records expunged in 1966.
Lee: You know they hang on to stuff they aren’t supposed to? 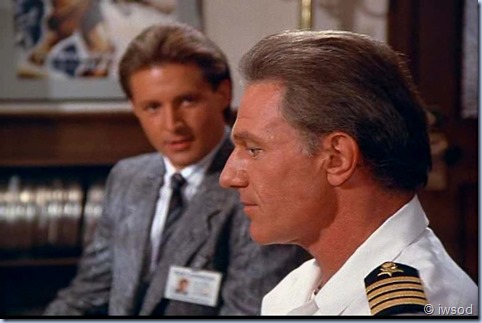 Ronson: But they don’t leak it! I’d say it was private, a fluke, but the other stories I’ve seen—all this old dirt—I was hoping you’d know.
[My first instinct is to wait and see if someone contacts Ronson.. the person who leaked it withheld the identities for a reason..blackmail!]
Lee: Listen, have you ever heard any rumours about J. Edgar Hoover’s private files?…

…You know, all the dirty underwear that the old man collected?

[rofl.. Lee doesn’t hold back in giving his view of JEH! This does seem a little random to me, that Lee would think of J.Edgar Hoover’s secret files.. are they widely known of or suspected? Why didn’t any suggest them in the meeting then?
Love how Lee has this hunch.. and the hunch about the source of the stories..so far this ep is a great big Lee hunch!

I thought last week Lee was saying Amanda was all guesses and luck?! this week Lee is lucky!!!! No no.. he has great instincts! err hunches!! yes that’s it!!]
Ronson: Sure… but weren’t they buried, or something? 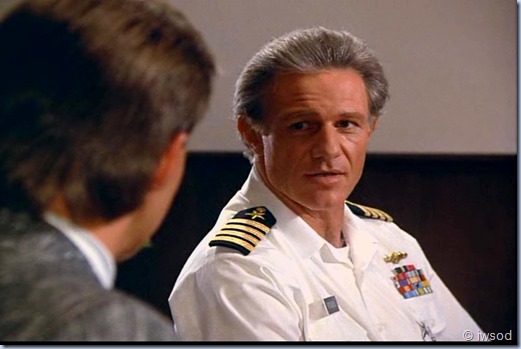 [LOL umm they are secret because no one knows what happened to them.. so why would Lee or anyone know if they were buried..
Wherever it has come from – it’s evident that this expunged information has been kept by someone somewhere…]
Lee: Or something. See, nobody knows if they even exist. After he died, they turned this whole town over looking for those files… [who is ‘they’??]

…It was like King Solomon’s mines… no luck at all.
Ronson: God…  those files. They could have everything about Mary in them… You think they’ve turned up?

[Something about Mary has turned up already! I guess it’s possible whoever is leaking could know about the naked sail, but not about Mary.. I guess!]
Lee: I think we’d better find out…

…Naked boat trips is one thing, but if somebody’s got their hands on those files, they could squeeze America’s secrets like toothpaste from a tube.

Oh my… now that is Shakespeare right there peoples!!!! haaaaaaa.. have you ever heard a cheesier line than that?? haaaaaa… but still BB delivers them in a way that makes it sound almost reasonable to say such a thing.. toothpaste from a tube.. haaaaaaaa..

I don’t begin to imagine I am any great expert in investigation or spy stuff.. but even the most basic novice could see here that putting Ronson under surveillance at this point would be wise. Knowing the story of Mary is at risk of being known by someone.. and either exposed or utilised means Ronson is the most likely person the leaker is going to contact.. want to find the leaker? bug Ronson’s phones.. follow him! Hmm I don’t remember exactly how this transpires.. maybe they do this and I just don’t remember.. eek!

Anyway.. moving on to an aerial view of a downtown street.. ahhhh this must be M street!

We hear the strains of a saxophone – hooo haa.. that’s smk code for sexy times!

We cut to inside a bar, and two women chatting as they walk..
Woman 1: I’m simply not interested in dating any more married men.
Woman 2: I know, I know, I don’t blame you.
LOL.. well good for you! Actually.. now I think about it, this is interesting. More of women talking about how men don’t treat them write.. and how they are not going to settle for married men anymore.. Hmm kinda relates to Agnes and her story no?

The camera follows the women, and eventually we see Lee and Amanda among the crowd. 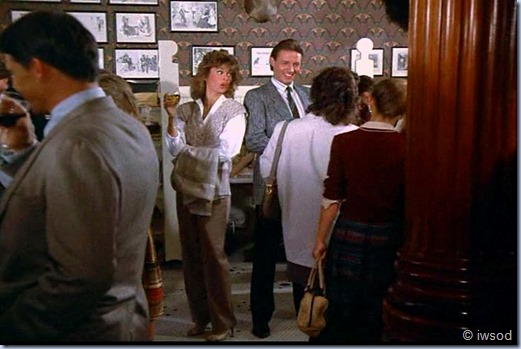 (Good thing she doesn’t stop and chat.. she keeps on walking!)
Amanda smiles at the room..well sort of.. because check out the moment above – she does not look to be enjoying Lee’s talking to women in the bar.. Hmm! but it’s clear she’s over this whole bar thing!

It’s so funny how Lee and Amanda are playing the game, standing back to back and trying not to look together- but they are still regularly touching each other- brushing shoulder, arms etc. I think it’s obvious they are together

Hmm they need to figure this one out, in their line of work this could be a career fizzer!

Nice to see you ‘again’?! Is this implying that Lee has met those women before?? Is this a hint that Lee has hung out on M street a bit himself?? This idea is not front and centre IMHO but… I think it could be implied..

I think Amanda is not enjoying hearing Lee play this game! And.. I don’t think Amanda is enjoying the whole gin mills on M street scene at all.. Can’t wait to hear what you all make of this! But.. it would remind her of Lee’s womanising past.. especially if Lee looks like he enjoys it too much..

Amanda looks away closing her eyes…

I don’t know for sure what’s going on with Amanda here, but I think it would be only natural that Amanda might wonder if Lee really has permanently changed.. you know?!

You know, if he has changed, Lee could feel awkward doing this in front of Amanda – but then again..he did assign her to this job. Maybe he wants to teach her this is a necessary part of the job.. even if she doesn’t like it.. Hmm..he doesn’t seem to feel it’s awkward.. what do you all think?
I’m starting to see that this episode is full of things to say about love and the dating game…! This is fascinating!! 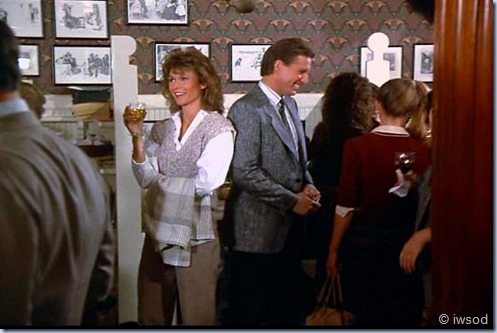 Amanda: You are really having a great time, aren’t you?

(Lee glances at Amanda and then away again, scanning around the room. They continue conversing, looking away from each other…)

Lee: Well, that’s why they call it Happy Hour, Amanda.

Lee: Come on, get in the mood. 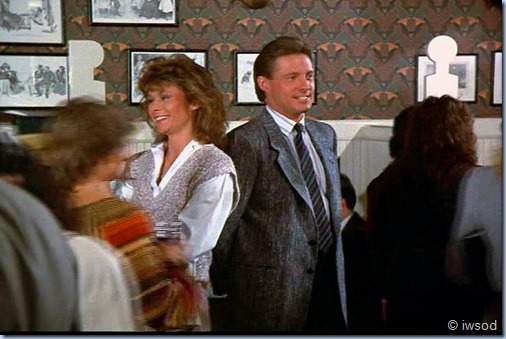 Amanda: I’m trying to get in the mood, but my feet are killing me—we’ve been standing up for two hours, you know…
[Ah see now that’s why it’s happy hour. Not happy two hours in heels!] 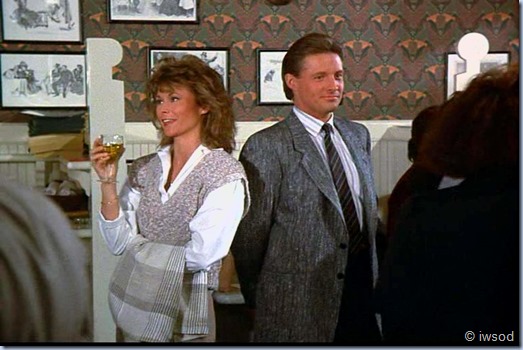 …You know this smile that I got on my face?

Lee: Uh huh.
Amanda: I don’t even know what it looks like any more…

– you know what I’m saying? 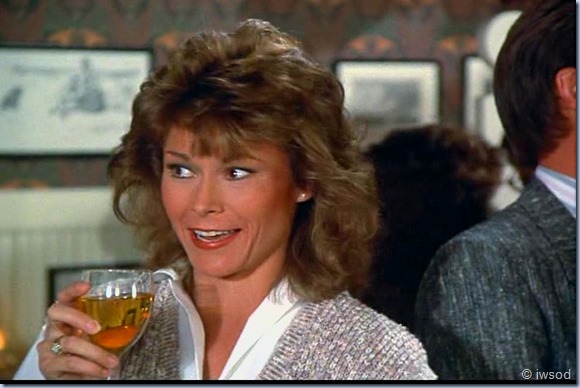 whahahaha.. I love this line of Amanda’s.. she’s not happy Lee! She’s trying.. but she’s had enough!

Okay everyone.. I better stop here with Amanda’s scary smile! whahahahaa..
I’ll continue with Lee’s response in the next post- sooooo what do you make of Lee and Amanda so far in the bar? sorry to split it but I want to keep posts reasonably compact! byeee