The next scene opens with a frat party going on! 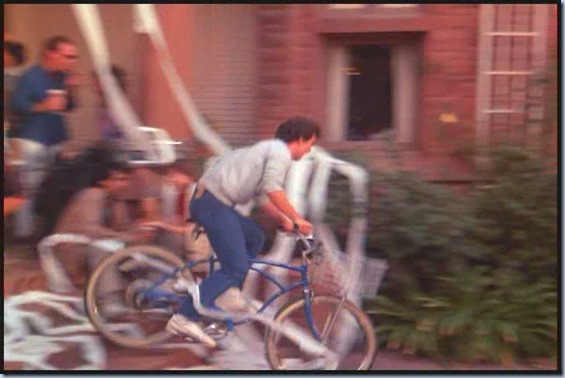 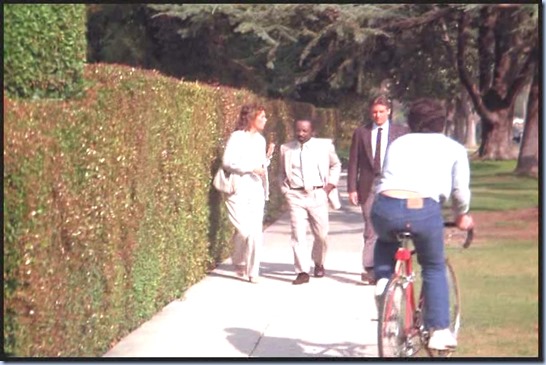 – only.. now his bike is blue!! weird!! He must be the SMK stunt bicycle rider!! [took years of training!]
We find Lee, Amanda and Joe in the distance walking toward the frat party. Only “Wait till the midnight hour’ is really loud and I can’t make out what they are saying.. glad kiwismh could hear! 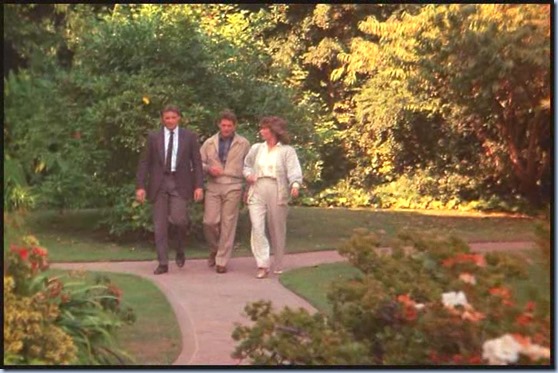 Very telling how Joe at this point is walking between Lee and Amanda – just like Shamba did earlier..

Lee: The fact that somebody has started shooting at you raises a number of new possibilities. Care to speculate on who it is? 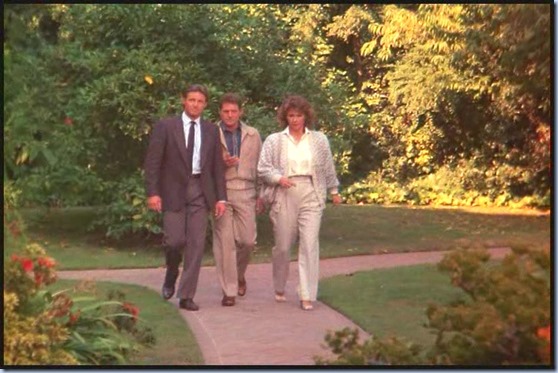 Joe: The same people who killed the Prime Minister of Estoccia – employees of US EAO.
Amanda: Why?

Joe: I caught them with their hands in the till,. 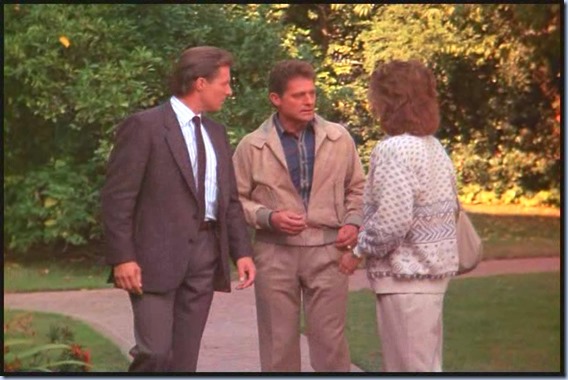 …stealing millions in US Relief…

…If they’re doing it in Estoccia, why not everywhere?

Lee: If I believe you—

Amanda (cutting Lee off): -Of course we believe you.  [what do you make of the ‘we believe you’? Amanda trying to speak for Lee?! Or willing him to agree with her?!] 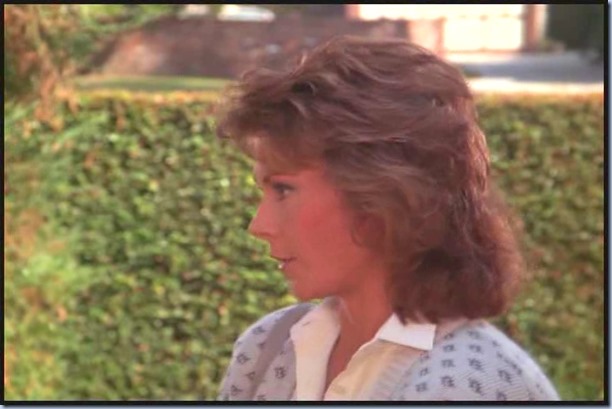 Lee interjects: If I…

[We see Amanda react to Lee’s repeated ‘If I’
she looks scared? sad? worried? How would you describe it? ]

… believe you,… (Lee looks at Amanda as he says this.. and then he looks at Joe) 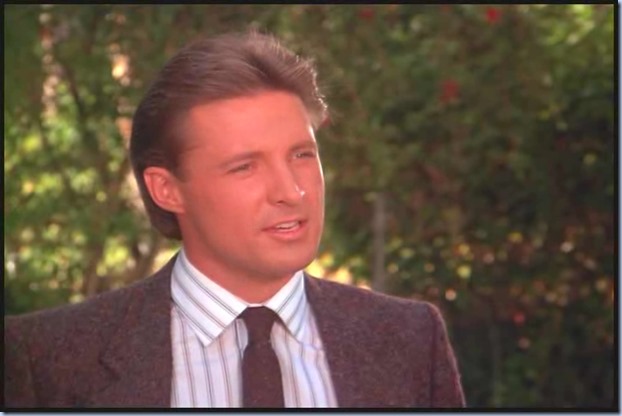 …this all starts to make a little more sense…
[Given everything that’s going on right now, Lee is doing well to stay focused on the case. He copes well with Amanda’s interruption]
… Our shooter will probably fall back and think about it. He’s not going to crash a rooming house full of people…. 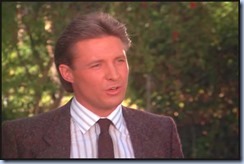 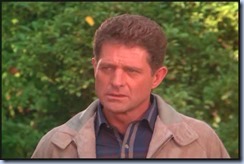 …Now you two stay inside… 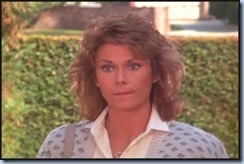 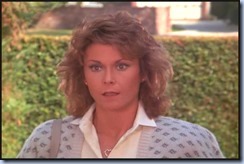 (We see Amanda nod- she seems a little more upbeat now that she knows Lee is working on things and not assuming Joe is crooked)
[Are they at Mrs McDragon’s? but the entrance looks different to before?! Hmm.. maybe it’s a back entrance!]
… There’s an Inspector Shamba that I have to dispose of for the night.
Joe: Shamba! 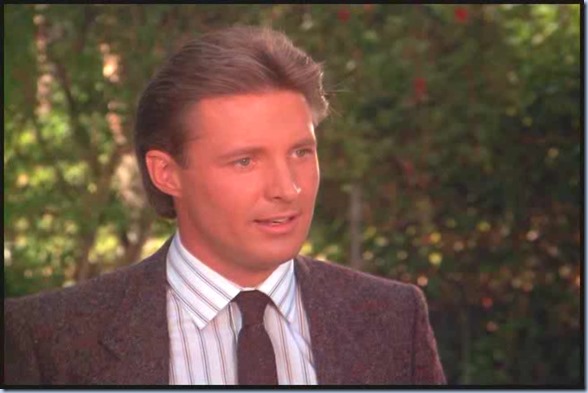 [And Shamba is special! Shamboga!]
Joe: You be very careful of him. I think he’s in on it.

[ummm just what or who does Joe think Lee is?! How did Amanda explain him away?? or are they trying to pretend they don’t know each other here with Joe? Oh man.. I don’t want Joe to worry about Lee’s safety – I want to dislike the guy! this makes it a tiny bit more difficult! LOL!! 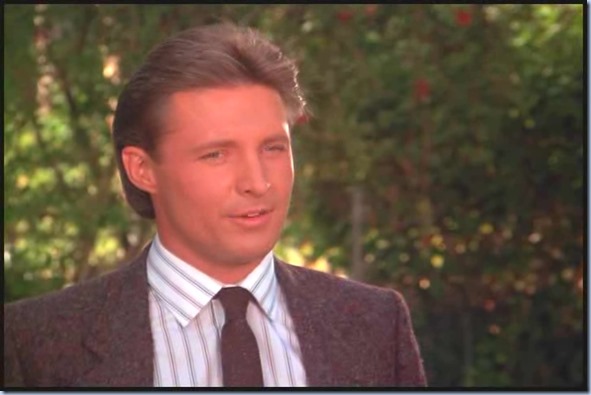 [Love the little sideways look Lee gives Amanda here – a little secret knowledge between the two of them maybe – that Lee is more than capable of handling Shamba! It’s Shamba who should look out for Scarecrow! ] 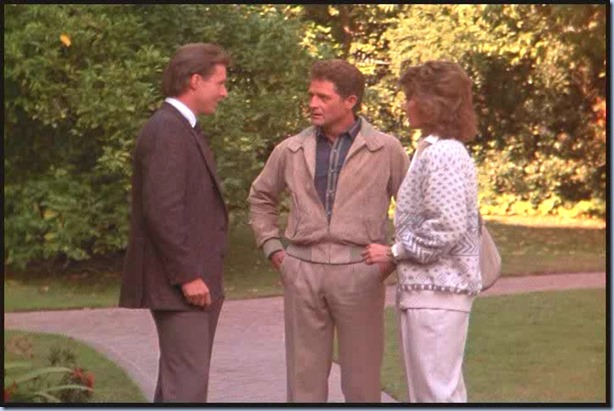 …See you two later.
Lee smiles and walks off leaving them.. he seems to be okay with leaving Amanda and Joe alone..
Interesting how Amanda and Joe watch Lee walk away for a second.. 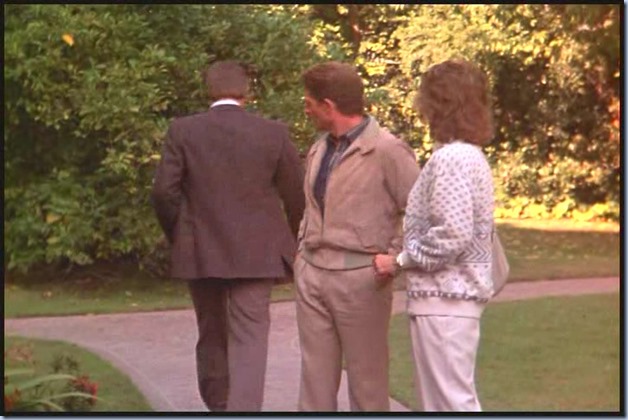 then.. they start to walk off.. Each reaching for the other’s hand? I like to think this is so they have a ‘cover’ for Mrs McDragon – because she knew they had been a couple, so makes sense to approach the rooming house as a couple..

Lee turns to look at them one more time. He seems to take a step or two looking in their direction..

Maybe he’s not okay with leaving them.. 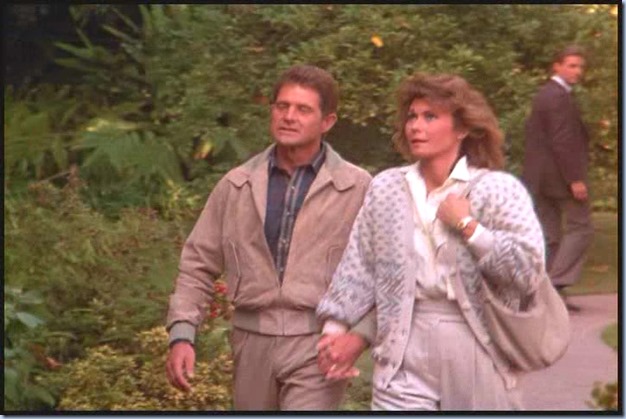 If bicycle boy had been in front of Lee he would have walked right into him!

What a poignant moment.. it’s all there in that second huh!! I wish I could get a clearer image of Lee’s reaction – it’s a bit fuzzy.. what do you of it? For me, I see him as being a little wistful watching Joe and Amanda walk off – wishing that it was him.. but knowing at this point, Amanda and Joe may work things out – maybe Amanda will get what she wanted all those years ago? Maybe Amanda still has feelings for Joe? I think it makes sense all these questions would be on Lee’s mind – only.. he has to try and move beyond that so he can focus on the case and what’s best for Amanda.. okay and maybe Joe.. ahem.. thoughts?!

The scene ends with Joe and Amanda struggling through the toilet paper, past the party and into the rooming house.

Night time falls… and we find Terminator Prescott on the phone.
Prescott: Will you listen to what I’m telling you – Mrs King’s friend is not a film maker.
No he came out with guns blazing… [Hey! ummm he could make action films!] …Face it, we’re gonna have to take those kids…

…and we’re gonna have to take them now.
Foster: No! Not until they come after us.
Prescott: I’m telling you, that’s the only way we’re gonna get a hold on King.
Foster: If we take his kids that’s it. We’re connected. All we can do is buy time but let’s be ready. If they do come after us, then we’ve got nothing to lose.

Their phone conversation ends there.. [I miss the baddie phone! The black one is boring!]
Okay! thanks for the reminder smk writers that these weasely greedy baddies exist.. and that the threat of taking the kids is alive and well and the clock is ticking!!!!!! The clock is ticking.. and Lee has to go deal with Shamba.. (Is the clock ticking on Lee and Amanda’s potential relationship now Joe is back in town?)

Well.. I’ll leave it here for now guys.. love to hear your thoughts!!! bye for now!