Brace yourselves! It’s back to the multipurpose room! Oh phew.. they’re not singing!!!

Marvin is trying to deliver an inspiration speech.. (Next stop the White House?!)

Marvin: … and we’re gonna keep on growing, until Marvin’s burgers take their rightful place next to Mother, and Old Glory… 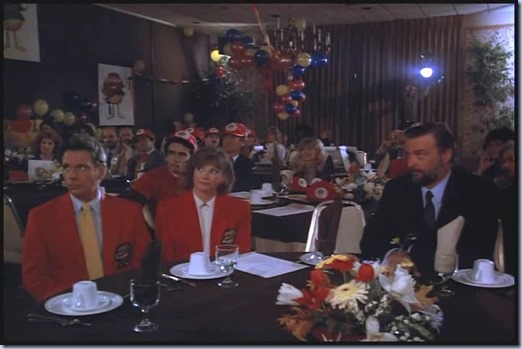 … as the three things that represent the best of everything about this great country of ours. 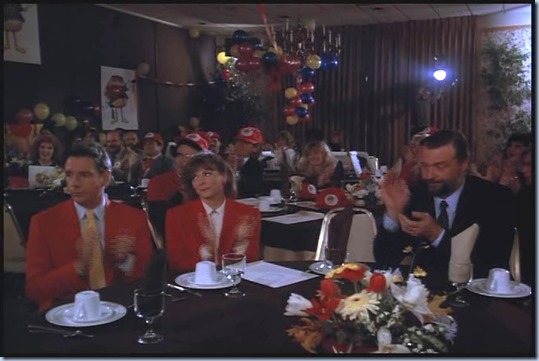 It sounds like there are some in the audience on board with him – but that front table is not looking very enthusiastic!

Someone is going to need to help me with the ‘mother and Old glory’ references.. ?? I’m guessing he is putting Marvin’s right up there as a national treasure – and completely over reaching?! Yeah!! Marvin’s is what makes America great!!! (wha?!) and then  to prove how ridiculous this is… uh oh.. The piano starts.. oh noooo!!! Everyone run!!!!!
LOL I think Marvin is trying to be the conductor!

Carla is seen to turn and look at the attendees with a big smile – sooo fake!

Uh oh.. she notices Lee and Amanda finding their way back to the room.. see now if they’d been a couple…

– they could have pretended they skipped out for a little nookie because the Marvin’s song was making them frisky! Yeah nahh who would buy that?!  But as brother and sister- that is definitely out! I guess they could have stepped outside for a family argument..
Lee and Amanda find their way back to their seats..
Carla gets Barry’s attention.. and even he notices they are acting suspiciously! 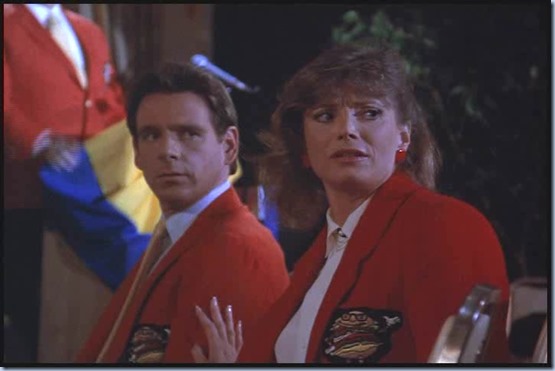 Carla is frowning and seems to be saying something to Barry we can’t hear.. because her lips aren’t matching the singing.. What we don’t know.. but it can’t be good! [I think they are in trouble because they only have on a lousy Marvin’s badge.. no hat.. no t-shirt.. they are not truly committed to Marvin’s!]

Moving on to the hotel bar.. guessing that is not at Marvin’s headquarters! (Though I don’t doubt it could use a good bar!)

We find Francine all dolled up and playing the honey trap – she seems to have caught the attention of the unknown man (KC says he is Cecil Bendix- thanks KC!]  who had been sitting at that first table not looking enthralled by Marvin. But now.. he’s pretty enthralled with Barbie err Francine.

Francine: The head chemist?  Ohhh!  That sounds so important.
Cecil: The most important job, to be totally and immodestly honest.
Francine: Mmm! What is it, exactly, that you do, Cecil?

Cecil: I invented the secret sauce…
[love Francine’s ‘wow!!!’ expression! when we know she probably loathes the stuff]

…The goo that makes Marvin Metz a quadzillionaire.

Francine: Ohhh…
Cecil: I’m the… man behind the man. The unsung hero, living in the shadow.

[Yeah those big corporations never think of the little guy..
I think Lee was thinking of guys like this when he was playing burned out agent!]
Francine: Oh, poor Cecil. That doesn’t sound fair at all…
[Francine’s Barbie impression here is fabulous. Kudos to Francine! Anyone ever wished we got to see Amanda do this??!!! Oh heck.. maybe we do and I’ve forgotten! don’t tell me whahaaha] 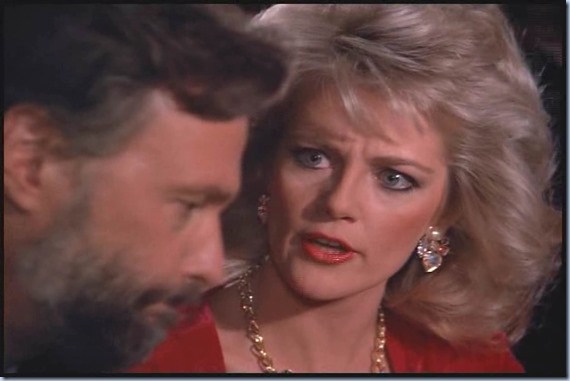 Cecil: It’s not. It’s not fair at all. But little Cecil B. might just turn the tables on Marvellous Marvin… 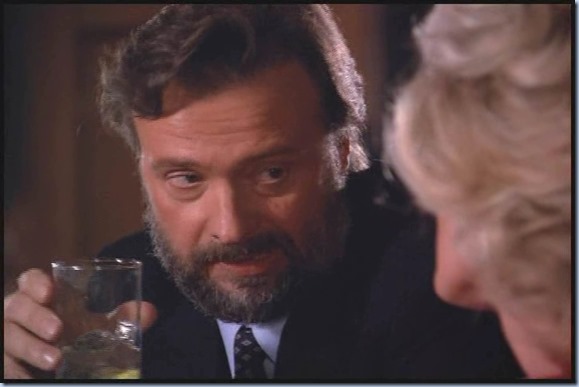 Having told Francine he’s a loser with a grudge, Cecil gets up and leaves. LOL either this is just really rubbish writing or Cecil is an idiot.. it’s so convenient it feels like a set up..
and what’s with the reeeeeal sooooon!!!! why would he add that?! and he didn’t even try to pick up! lol.. maybe he’ll come back..

I guess it’s all down to Francine’s magical honey trap powers..

And yes.. I think that necklace is a weapon

and yes.. IMHO that dress is awful.. though I can see that maybe it was a fashionable fabric at the time.. but for me, it doesn’t look very flattering.. even with Francine’s assets.

In walks Lee and Amanda.. Lee seems to enter, looking at Francine – like he knew he would see her up at the bar..I guess she wasn’t foisted on Lee without his knowledge..
Amanda though hasn’t noticed Francine – has she been told Francine will be there?!
Amanda: What is going on?

They walk further into the bar..

Lee: You got me…. (Lee looks at Francine at the bar..)
[Look at these two.. soo not brother and burger flippin sister!]
…It’s the first time I’ve been on the trail of a double cheeseburger.
Marvin approaches them: Did I hear someone mention double cheeseburger?

[Aie.. yep.. I’m surprised Lee wasn’t yelling at the top of his lungs about the Killer Colossus Burger!!!]
Lee: Hah-ahhh.
Marvin: Two of the tastiest words in the English language. Name’s Marvin Metz. Friends call me Marvellous, and who am I to say they’re liars?

Marvin: Were you folks at the seminar tonight?
Lee: Yes, we were. [thus why they are in a bar.. and probably seeking a drink!]
Amanda: Oh, yes we were.
Marvin: Err, Mr. and Mrs.? 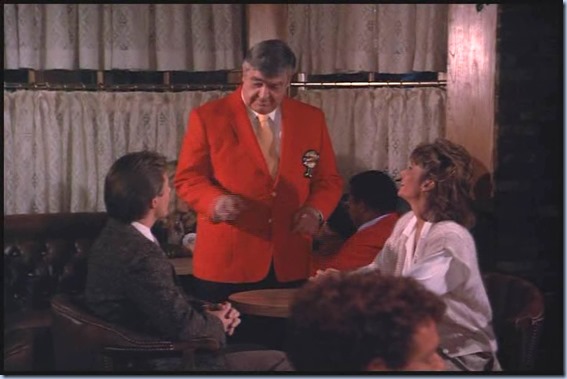 Marvin: Amanda. Brother and sister?
[Marvin seems too happy they are just brother and sister.. Is he making a play for Amanda?! He doesn’t repeat Lee’s name 😉 Hmm.. maybe not..]

(Lee smiles and tries to look over at Francine at the bar)
[I guess since they are not Mr and Mrs Lee is allowed to do that! lol..]
Marvin: Well, I like that family spirit… (Lee looks up at Marvin) 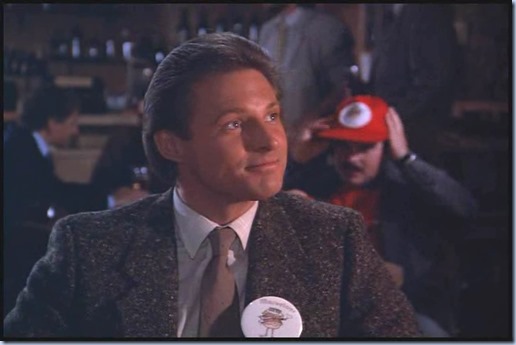 (Marvin starts walking toward the bar.)
Amanda: Oh, thank you very much!
Lee: Well… thank you.

LOL this Marvin dude comes across as friendly and harmless, but he also doesn’t take no for an answer here.. Hmm.. is he coming on to Amanda??!!! Hmmmm maybe not..
He just walks off assuming they’ll drink with him! LOL! Why? what’s he up to? he could be working with Carla and Barry and be sussing them out.. The guy certainly isn’t marvellously modest.

Was anyone else wondering about whether Marvin was a good guy or a bad guy at this point? I mean that burger that has his name is evil looking enough!
I’m going to stop here – why not! and I’ll be back with more soon.. Anyone liking Francine’s outfit?? Come on Kiwismh.. Hit? or Miss??!!!!