Back to the Marvin’s factory and Barry is doing magic tricks and walking backwards.. while holding a gun on Amanda and Francine. LOL.. I would have been terrified Barry would trip on something fly back and the gun would accidentally go off! Just looks really wrong! 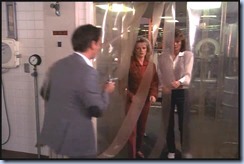 Carla (to Amanda and Francine): Well, this should keep you comfy for a little while…. 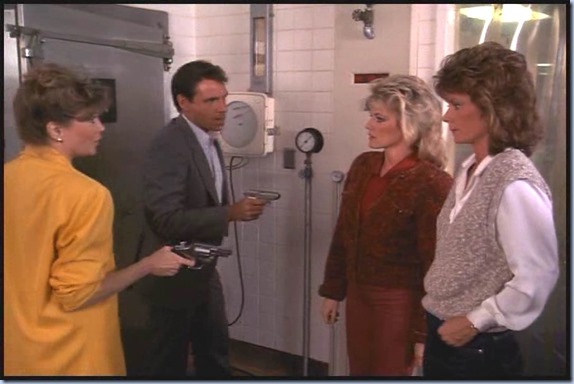 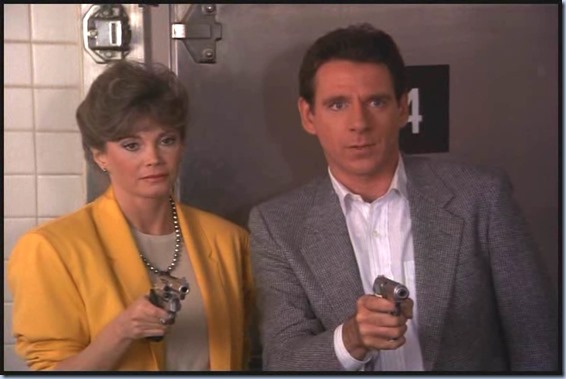 Love the look Carla gives Barry here right before she answers him. [I think Carla’s thinking.. man you are dumb!! I agree with Kiwismh who said in comments she thinks Carla would have killed Barry after she got the money!] 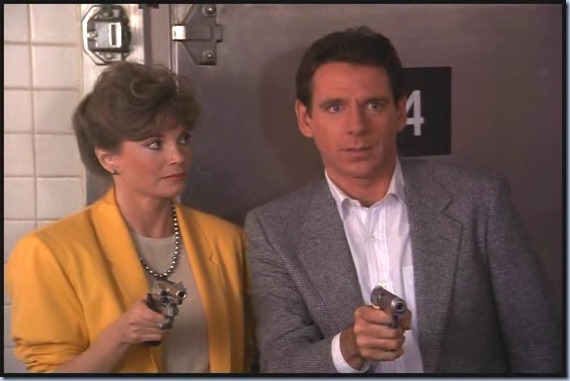 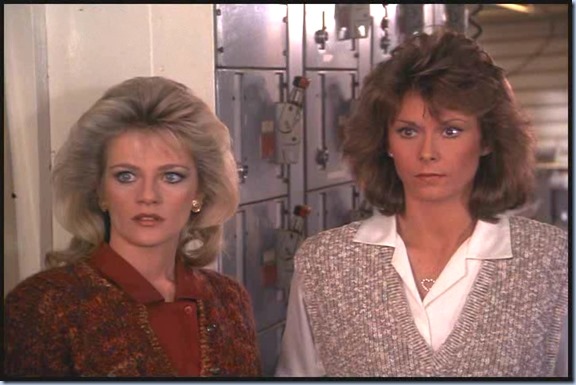 …If anything goes wrong,.. 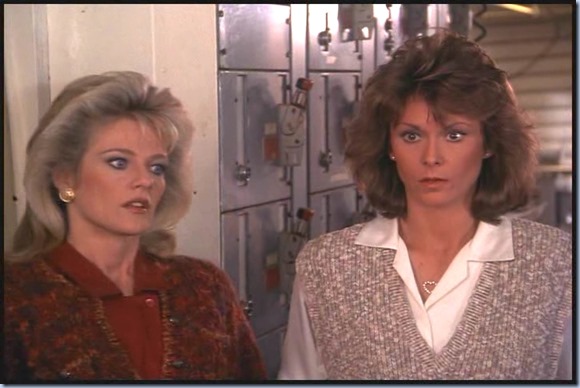 …I want them dead. Now, set the timer. 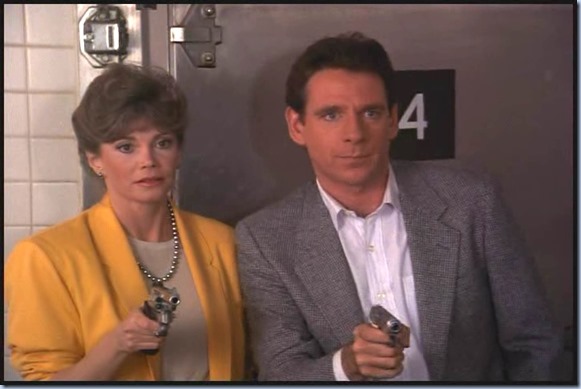 Barry does what he’s told.. 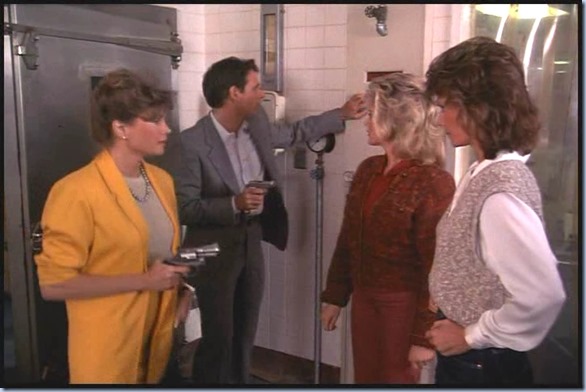 [Barry lets himself get bossed around doesn’t he!]
We see a close up of the timer.. seems the time is now 3:36 and Barry inputs 4:30 and then the timer goes back to the time. 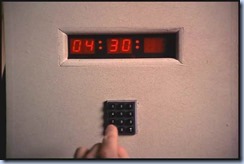 Amanda and Francine head into the freezer..

Francine gives them one last look as she goes inside.. 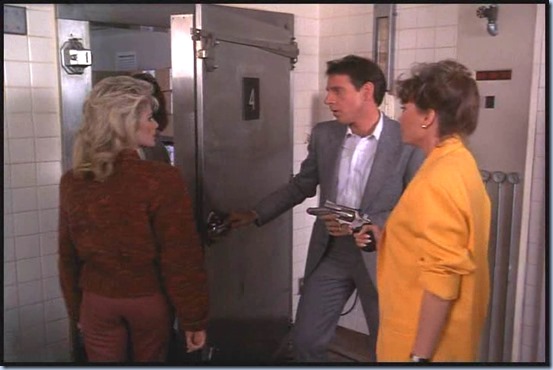 Barry locks the freezer..
And Carla and Barry leave.
What was it that Francine called out to them before she got nabbed? Oh yeah.. it was.. “FREEZE!” well.. I kinda wish she hadn’t said that now!!! whwhahahaa!!!
With one last close up on the timer and the scene ends.. 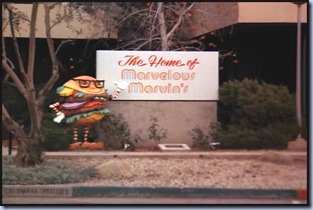 Back from the commercial break, we see another lovely exterior shot of Marvin’s at Columbia studios.. with the parking space for Columbia visitors. Whooo I think I saw the burger’s hand move!!!! Honest!!!! whahahaa 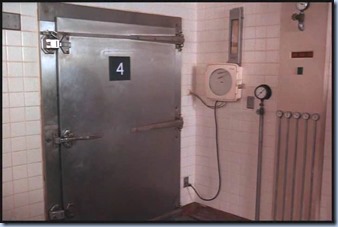 Back to the super important freezer number 4!
Plenty of chances for us to see it’s freezer number 4! Number 4!!!  LOL what’s with all the shadows moving the foreground? I guess they’ve reused the same footage from when Barry and Carla left.. Well.. 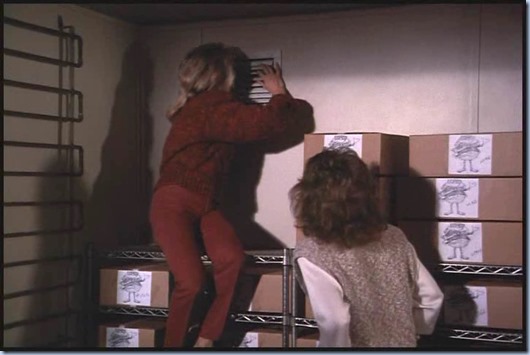 Amanda: Anything?
Francine: Nothing… This place is airtight. 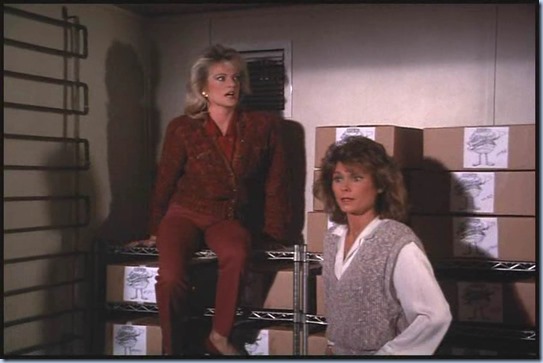 …Don’t you have an idea?

[Amanda’s level of panic seems to be rising.. Whoa, we’ve seen Amanda is dangerous situations before, but she’s never reacted like this. I think it’s partly because she’s trapped with Francine and has to deal with her snipes.. Amanda’s had enough of Francine! lol… I wonder if it is a little to do with Francine  interrupting Lee and Amanda the night before too? whahahaa.. thoughts? anyone? ]
Francine (shouts): Yes I do, Amanda…

…If we get out of here, my idea is you go home and you stay there.

[I loathe Francine in this moment!!! In a moment like this? saying that?? IMHO it’s really petty. Though I actually think Francine is so nasty here in this moment because she has no answer for Amanda.. the super skilled super spy Francine has nothing she can do.. when Amanda asks her what’s next.. and I think that is especially difficult for Francine, who prides herself on being so self-reliant and independent.. right now? She’s helpless.. so she lashes out at Amanda. Booo!]
(Amanda closes her eyes at this.. but quickly recovers.) 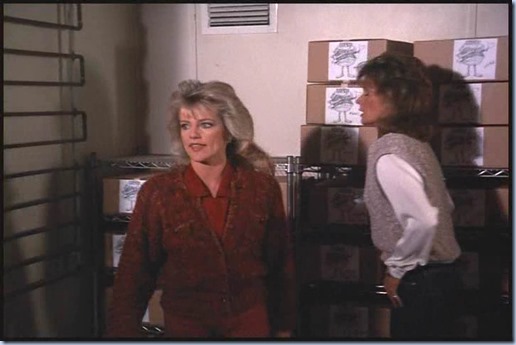 [ good for you Amanda!]
Amanda: Francine, look, I don’t wanna be…

(halts herself and closes her eyes) 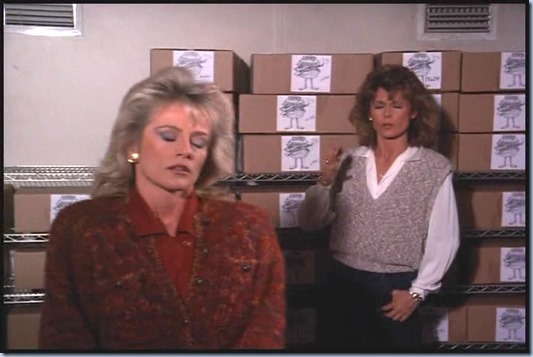 …I’m sorry, we shouldn’t be arguing.
[I think this shows real maturity here from Amanda.. she’s the person here who rises above things to keep control of this situation.. not the trained agent

]
(Francine motions sort of that she agrees) 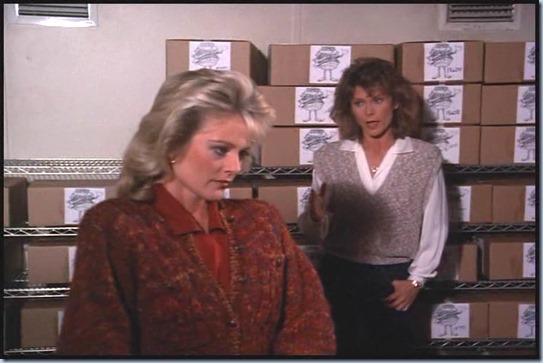 [I think Amanda has come to terms with the panic of being stuck with Francine now.. and her thinking is kicking back in.. good one Amanda]
(Francine turns to face Amanda.)
Francine: A team?
Amanda (nodding): A team.

[LOL Amanda is not a stranger to asserting her place in a partnership, she’s had years of experience with Lee! Hmm actually, now I think about it, she would have tried to do that with Joe – only that didn’t result in them being a team.. but with Lee – her persistence paid off

and has equipped her to deal now with Francine! ] 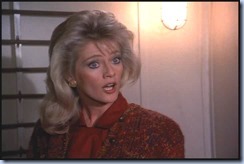 Francine: You and me? A team? 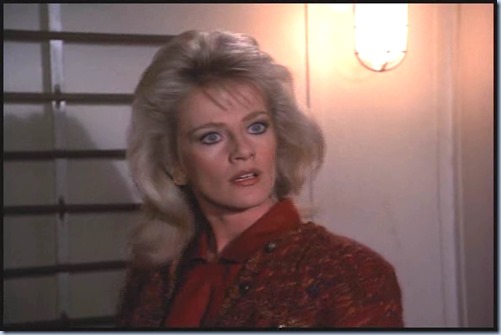 Amanda seems to have surprised herself at the forcefulness of her assertion here. Maybe bracing herself for Francine’s response.. will she lash out again? Insult Amanda some more?? 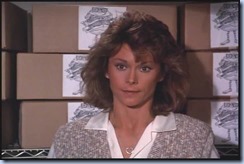 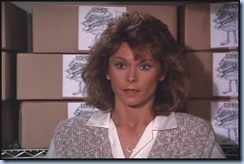 Francine (forcefully): You know what a fact is? I rely on one person, and that is me. Now, this is the real world, here…

[I think Francine has no idea just how many dangerous situations Amanda has found herself in.. or if she knows.. she has chosen to disregard it IMHO.]
(Amanda seems a little taken aback at Francine’s reaction here)
[Whoa! Mt. Desmond has erupted! and out pours the lava of hurt!]

….Don’t you expect Lee to come charging in there on some kind of a white horse, because he won’t… 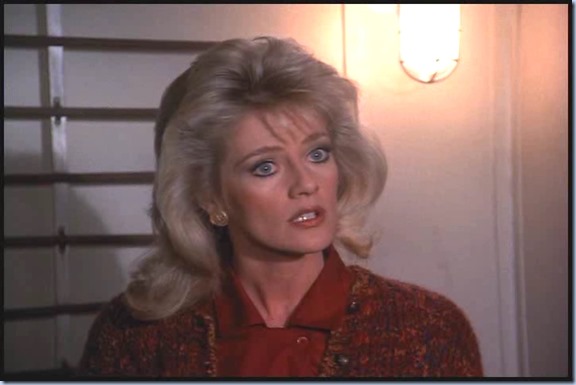 [Francine seems to see Amanda as the dreamer who needs a reality check.. Francine thinks she knows the harsh realities of life..and Amanda doesn’t.]
Francine: …People are not always there when you need them. You cannot count on them, because people leave. 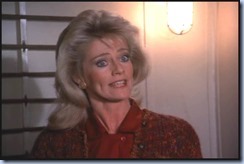 Francine looks a little shocked at what she has revealed here..
[Can’t wait to hear what you all make of this!]

And quickly turns around to face the wall to collect herself. Embarrassed maybe at this crack in her tough super independent woman spy facade?

Amanda is shocked too.. She’s silent a moment.
We cut back to Francine, still with her back to Amanda.. her face now in her hand.. and she sighs.. trying hard to deal with her emotions..

We see Amanda glance around.. and then look back at Francine.. she seems determined here. 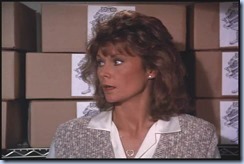 Amanda breaks the silence: Stuffy in here, huh?
[Seems Amanda has wisely chosen not to directly address Francine’s outburst, and has instead chosen to make things easier for Francine..and change the subject]
(Francine turns around to face Amanda.) 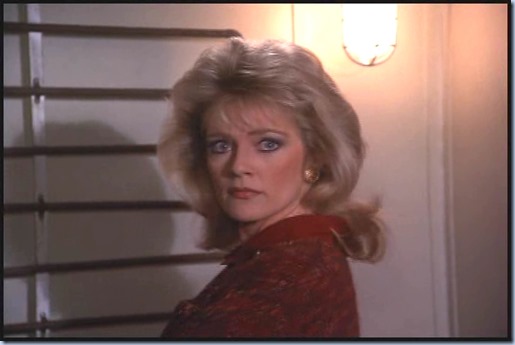 Francine (quietly): Yeah. (looks around) Now that you mention it, it is. 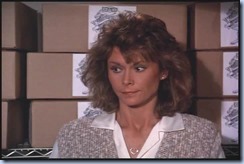 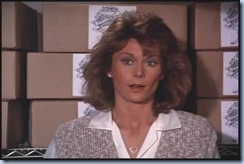 …We’re using up the air.
[Again.. Amanda keeps her head

she manages to get her emotions sorted and try and be smart about this being held captive business.]

Francine silently acknowledges this.. (IMHO)
Amanda: I could hold my breath?!

Francine (IMHO) begrudgingly smiles at this attempt of Amanda’s to break the tension with a ridiculous suggestion.. 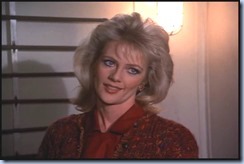 Not even Francine thinks Amanda really meant that. Haaa and good to see that Francine has a semi-normal sense of humour! 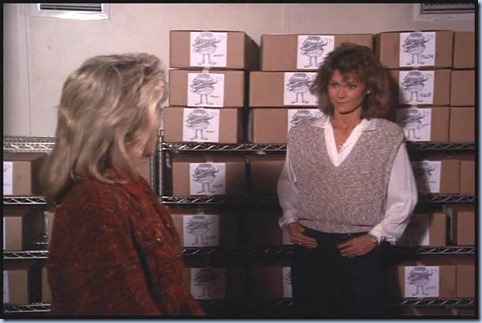 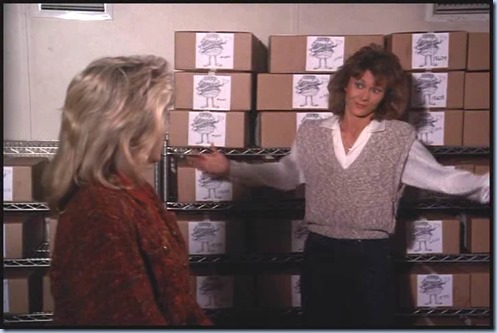 The scene ends.. Oh boy.. can’t wait to hear what you all make of this! What a fascinating scene between these two women.. a bit of a milestone moment maybe?

I’ve always found this moment where Francine lets her hurt out about people leaving to be a bit fast– for Francine! Maybe after a day or two stuck in there..I’d expect this!  lol but well.. it’s here!! Sooo um maybe the speed of this confession of sorts, is an indication that deep down Francine has begun to let her guard down with Amanda..? What do you all think?

I think Francine has a few assumptions about Lee and Amanda here too.. She assumes Lee always rescues Amanda. Well.. yes okay.. often he does. but Amanda holds up her end of the bargain and rides in on white horse to rescue Lee quite regularly herself! [though alas the one time she was literally on a white horse? Lee did ride in and save her lol!!! Irony! what ep was that everyone??!!!

]
Oh and Amanda saved Francine in LOTP – well that must have been a fluke according to Francine.. she’s probably rationalised that one away successfully! Francine’s attitude reminds me of pre-Brunettes are In Lee.. Amanda doesn’t belong in the spy biz. For Lee it was that he didn’t want her to be in danger… but for Francine? It seems to be that she doesn’t think Amanda is cut out for the harsh realities the life brings. Maybe?

Hey- finally we have a really interesting scene to sink our teeth into again! it’s been a few posts of plot holes and head scratching.. sorry I haven’t been skipping all that – I do try and find the little character moments amongst the cringe worthy stuff.. and have a laugh at the silly plot craters (or hope someone can fill them for us all!) LOL.. and if I skipped it all – we’d miss fabulous gags about Lee actually forgetting he has to run his plan by Billy no?!

Whooo this is a biiiig post..  I’m going to stop here and leave further exploration to you guys.. and comments.. what’s going on here for Francine? for Amanda? Love to hear your thoughts! byee for now!