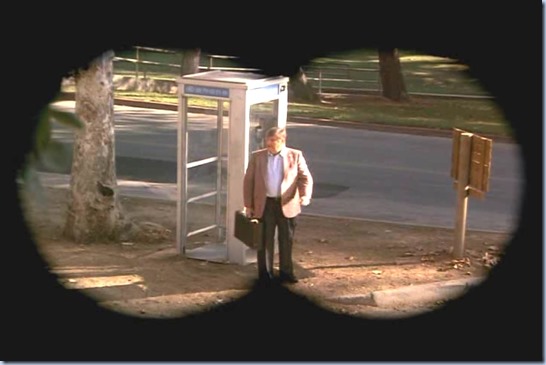 Billy: It’s 4:05; they’re late. Everybody, stay on your toes.
Billy orders the team.. why I don’t know.. since the team never do anything anyway! Only Lee can save the day!! right?!

LOL. Billy looks so tiny next to Lee here.. he umm must be standing in a ditch.. and Lee.. isn’t! Seems Lee has decided watching the drop requires a leather jacket and gloves.. well.. you’ve got to have a good firm grip on those binoculars!
(The scarecrow could probably open a safe with those binoculars!

Back to Carla and Barry..

Carla looks pretty happy with how things are going.. she can hear the ker-ching already! 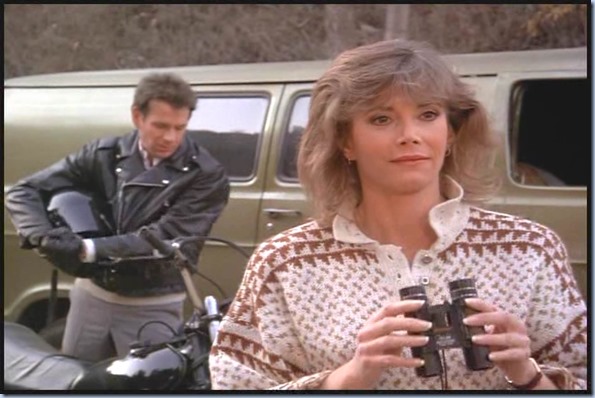 Carla turns and walks over to Barry.
Carla: Meet you at the airport.  Twenty minutes.

[so weird how all of a sudden she doesn’t want to get her hands dirty. She strikes me as the sort who would not have trusted Barry to collect the $$. ]
Barry: Right.
(Carla turns and collects a gun from the van.. then turns back to Barry)
Carla: And Barry… Once you’ve got the money… take him out. 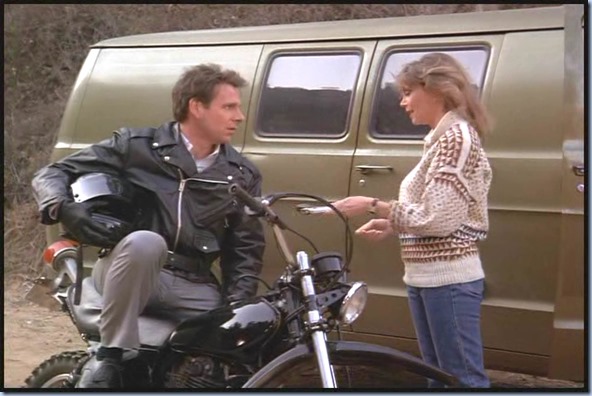 (Carla holds the gun out for Barry, who looks at it and then finally takes it.)
Barry: Take him out? My father?

Carla: He’ll be the last witness, Barry—once the women die in that freezer.

[Umm have we forgotten about Mr Stemson? and Eddie isn’t dead either for that matter! Carla has suddenly gone soft in the head now all that money is so close!
Plus, how arrogant is this woman to think that she could just tell Barry to kill his father and he would do it?? She’s dumb to trust Barry to do this.. the guy is a wimp- he was okay with remotely stealing money from pop.. but not with standing in front of him and shooting him.. he’s too gutless for that! Any dill can see that!]
Barry: You’re not planning to tell them where they are?

[Barry seems to have thought he was playing a game here.. did he not know that Bendix is murdered? or that Eddie got a radiator rammed down his throat? or about the bomb in Lee’s room? He’s been too dumb to realise how ruthless Carla is.. but now he’s in so deep he can’t say no. I figure Carla would have just shot him there and then and collected the money herself if he had refused]
Carla: This is the big leagues, Barry. We’re playing for keeps. Get going. 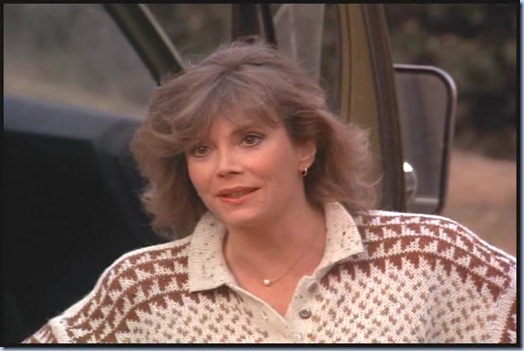 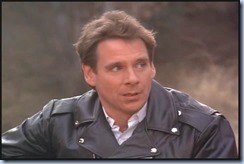 Barry looks unsure of this plan.. but being a good little wimpy boy, he does what he’s told, 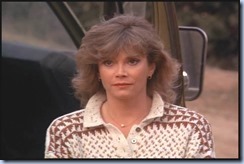 puts on his helmet, flips down the visor.. revs the motorbike and then rides off to collect the money.. and kill his father!
This has failure written all over it! Who would trust Barry?!

Back to Marvin waiting… 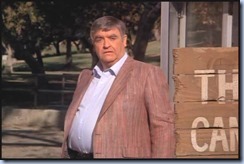 We hear the motorcycle approaching..

Lee and Billy at a distance watch on and see Marvin moving..

They see the motorcycle approaching.. Is it just me or does that motorbike sound like a fly?!
uh oh … Lee’s not happy..

Oh noooo! A motorcycle will ruin everything!!! The homing device will no longer be effective??!! and.. that helicopter that Lee mentioned will be rendered inoperable??!! (ahem.. )
If only Lee the superspy had prepared for the all powerful buzzing motorbike!!!
We see Barry approaching Marvin and the briefcase..
He rides past, and turns to come back..
Lee runs for the motorbike blurting out before he goes: He’s gonna snatch the case and run.
[Ummm what did Lee expect? that Barry stop, pick up the money, assemble a trusty fold out table on which he would  count all the money and then figure it was a good time to leave? oh my.. Scarecrow! This Barry is super clever! He’s going to take the case… And Run!!!]

Lee runs to the motorbike which just happened to be waiting there.. what luck.. Love how the other 4 or 5? agents all get in the one car.. lol I’m sure they’ll head straight to goofy golf and not even bother to try and nab the cunning Barry!
But Lee – he’s got the jacket for a motorbike ride.. oh and he has a helmet?!!  what luck! and gloves? what luck!

Back to Barry, who gets off the motorbike and asks for the briefcase. lol!!! (I’m surprised he doesn’t say please!)
why not just take it.. 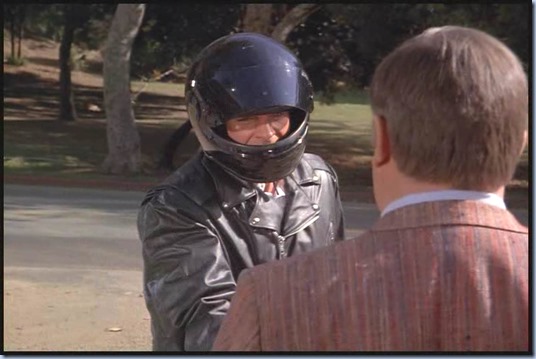 Barry: Give me the money, Pop!
Marvin: Never!

[they should have given Barry a less shiny helmet.. you can see all the crew lighting in it and reflection of the sound guy.. everything. lol.. yes that’s how interested I am in this little scene!]
(Barry pulls the gun on Marvin.)

Marvin: You haven’t got the guts.

Correct! (Barry throws the gun to the side and tackles Marvin.)

Marvin was right.. he didn’t have the guts.. I’m pretty sure I’m suppose to be thinking right now – ahh Marvin took a stand! I figure this is suppose to be Marvin’s moment of triumph.  He knew his son was a wimp and knew he wouldn’t shoot.. rah rah.. but you know what? Maybe it’s just me but I’m annoyed at Marvin. He hasn’t followed what Lee said – and Amanda is being held hostage (as far as he knows) and is counting on this exchange to be returned. Not to mention all those innocent Marvin’s customers.. Lee promised trackers and helicopters – and they weren’t going to get away with it. To me, this moment for Marvin is all about his ego – and sticking it to his wimpy son. Goading Barry that he hasn’t got the guts?! Marvin has completely thrown the plan into disarray and has once again put Amanda’s life at risk. It was because of Marvin she was captured in the first place – and now? All Marvin can think about is teaching his good for nothing son a lesson.. This is maybe one reason why I’ve never warmed to the Marvin character, I see him as quite  selfish individual.

Ignore me if you like him.. I often ignore myself

Lee would never let his own ego or need for revenge get in the way of risking an innocent’s life.. Poor form Marvin.. It makes me wonder if Barry and Marvin are more similar than they first appear.. both have lousy taste in 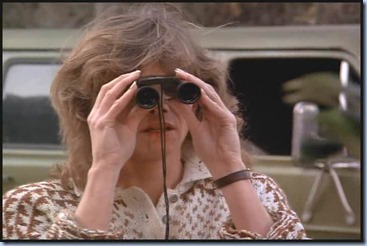 women and a lack of judgement. Booooo..

The shot cuts to Carla, standing near the van and looking through binoculars. She takes a deep breath and watches on as this colossal mess unfolds.. 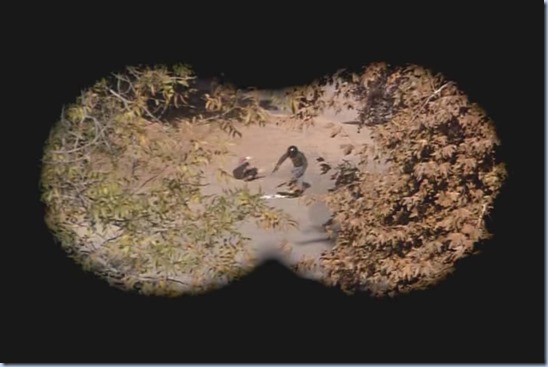 Looks like Barry and Marvin fight, Marvin ends up on the ground and the $$ spills out of the briefcase..
How ridiculous..
but wait! Here comes Lee on his motorbike! It’s time for the duel of leatherjackets and motorbikes!
[what’s with the tinkling mixed in with the super ramped up action music??!!!! rofl!!!! the music is so over the top it’s funny!]
Rofl at the treasury notes sticking out of the briefcase as Barry takes off.. 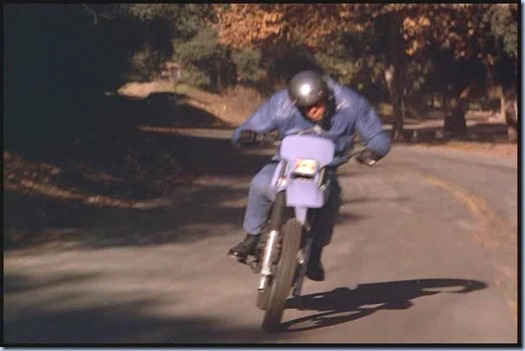 I guess it’s not Olympics this week.. it’s motorcycle grand prix and the race is on..

Billy has prime position with his binoculars but decides.. nahh I want to be in the race too! I’m going to join the race with Lee’s corvette! why does Lee get to have all the fun?! Carla runs to the van and takes off – is she joining the race too? Hey why not… let’s all race! this could be fun!
Well everyone.. what can we say about this oh sooo hooo humm motorbike race?
Not Barry is chased by Not Lee.. 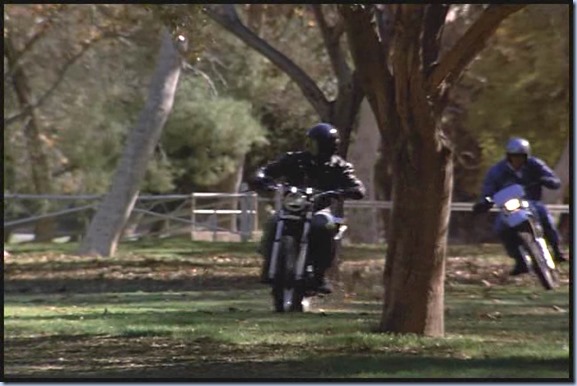 But wait! we have another Lee cam shot!

Quit playing around Lee..
Is it just me or does Lee’s motorbike sound so much more masculine than Barry’s!

Oh enough! Not Lee pulls up along side Not Barry and dives on him, sending them both down a grassy soft hill

Silver helmet wrestles Black helmet.
[Or is that ‘Dark Helmet’ from Spaceballs?! lol that would make Lee Captain Lone Starr!]

Billy obediently brings Lee his corvette.. LOL..
One punch in the guts and Barry is begging for mercy – wimp!!
Barry: Okay, okay!
[rofl.. he’s begging for mercy before he’s even seen the big gun! What! A! Wimp!]
(Lee aims his gun at Barry.)

Whoooo me like Lee and his helmet hair! Is there anything this man’s hair can’t cope with?!
Lookin good scarecrow! Ahem.. right..
I better pause here for the moment and collect myself!
Anyone love this action finale??
What did you all make of Marvin’s performance here at the handover? Do tell!!! byeee for now and back with more soon