8/15 Season Three, Episode 17: The Eyes Have It-Scarecrow and Mrs King

Next thing we are back at IFF… The scene opens with Neumann’s name on a chalk board being crossed out.

Lee: Neumann never had the lenses, Billy, otherwise he wouldn’t have come after me.
[Oh right..so that’s what that look was at the end of the last scene.. well.. at least it narrows things down nicely!

The Camera pans out and we see the full chalk board. Francine is there also..

[LOL – Billy has a chalk board in his office? I thought it was just the conference room? I guess now these baddies are getting more complicated we will need a chalkboard

I’m guessing 15th + G is where the bus stop got crashed into? which lol is a bit of a shame… because that Policeman back in Post 2 reported they were at Third and Gilmore

Umm Lee you’ve left off the ambulance – surely Lee would have arrived in an ambulance? but.. if he had then Goldberg may not have been first to see the lenses.. umm let’s just pretend Lee didn’t arrive in an ambulance?! Amanda gave him first aid, and then the cops put the lights on and floored it.. ahem.. ‘Hospital’ seems to be err rather general!! strange given that is the one place where Amanda and Lee were finally separated so Amanda can guarantee the lenses were not taken before then.
Oh and lastly- what’s with ‘SAVE’ down the bottom there? Is that a little note to old scarecrow to remind him what he’s suppose to be doing here?

Billy: Agreed. But where are they?
[Umm I thought Billy was wanting Amanda to keep Lee resting at the hospital.. err me confused.. maybe that wasn’t Billy who said that in the garage – it was someone who sounded like Billy.. and okay.. looked like Billy

man.. that’s quite a trick

to get rid of Duffy!]
Lee: How about the parking garage?
Francine: No, no we had two dozen men there for 12 hours. They vacuumed the place and the vehicles… [no women.. only men! It was Francine’s choice to make the men vacuum

]
…All they could come up with was gum wrappers and lint.

[LOL the way Lee holds that chalk it’s like he is smoking!!! is BB a former smoker?!]
Billy: I’m gonna have to write off your network, Scarecrow.

[WHAT?????!!!! Billy is super quick to just dump Lee’s network of civilians! grrr..
Helloooooo!! why is no one looking at who works at the hospital? and who had access to Lee’s eyes?! I mean Lee has a network of people in hospitals – why wouldn’t a clever baddie create a similar network? Oh my.. this is really quite a lame plot so far – okay Lee has a head injury – but what’s Billy and Francine’s excuse?
lol I see Francine is not on crutches.. In The Triumvirate we were told by Billy that Francine’s bullet went straight through and she would be on crutches  ‘for a while’ – guess it’s been a while between this ep and the triumvirate! ]
Lee: No!!

…You can’t do that. We’re tightening the noose. 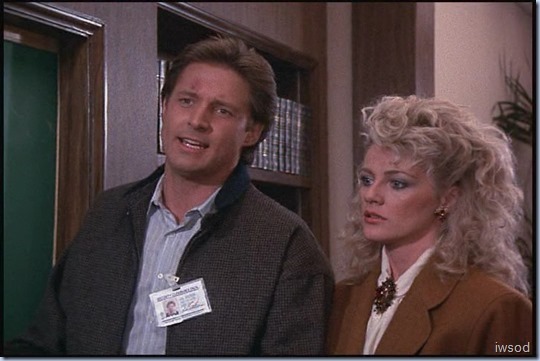 [No wonder Lee doesn’t let his guard down at the agency..he’s got to fight tooth and nail for the people he is responsible for. How quickly Billy seems to want to give up! Boooo.. but okay I figure the writers want to instil some more tension here.. like the clock ticking on the baddie getting the info isn’t enough.. the agency seems to want to put a deadline on it too..]
Lee crosses out two more locations on the chalkboard.. and points to the hospital.
Lee: It has gotta be here. 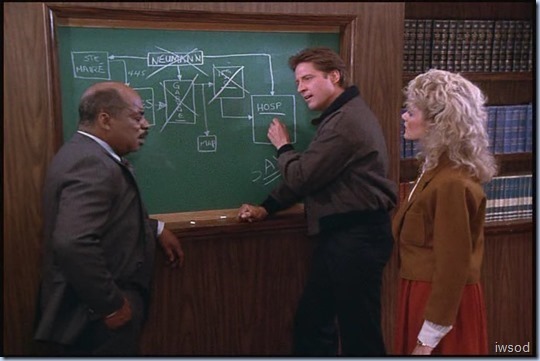 Billy: Well, you know the agency rules. Just a hint of compromise and we shut the door and your contacts have to swim alone. 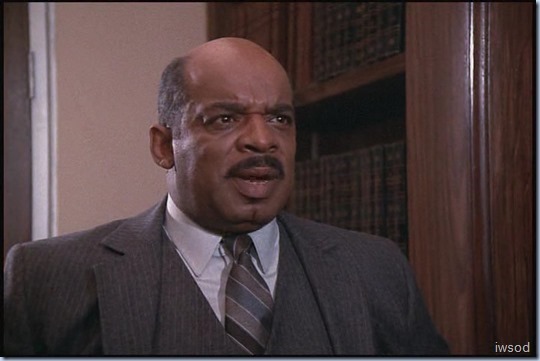 [what a pun!! Lee’s contacts?!  And how awful that Billy is suggesting just leaving these people who trusted in Lee to ‘swim alone’

this is IMHO not Billy’s finest moment! A bit heartless.. but also a really bad mixing of metaphors 😉 ]
Lee: Well then you have to give me some time….24 hours at least. Billy, they trust me; I can’t let them down. Let me at least check with them, huh? It’s their job to hear things, right?

Billy: Okay, 24 hours on one condition. The minute you’re through talking to your contacts, I want you to get off your feet.
[Talking to Lee’s contacts lol.. such a funny choice of words. But it is typical smk humour to have a contacts list on contact lenses!
Ouch.. this is a bit rough.. 24 hours.. At least Dr Smyth gave Lee 48 hours to save Billy’s career back in Reach for the Sky! I do wish Lee had reminded him of this fact!]
Lee: No, I can’t sit this one out.

Billy: Alright we’ll set something up in your apartment so you can stay on top of things, okay?
[Lee does not look super happy with this compromise of Billy’s but with 24 hours I can’t say I blame him.] 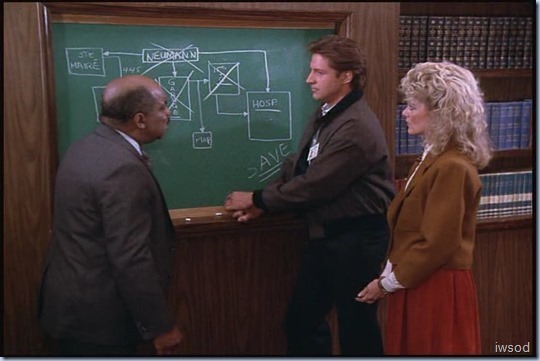 Lee:  Okay. Thanks.
(Lee gives Billy a pat on the arm and walks out of the office)
Billy and Francine worriedly watch Lee leave. 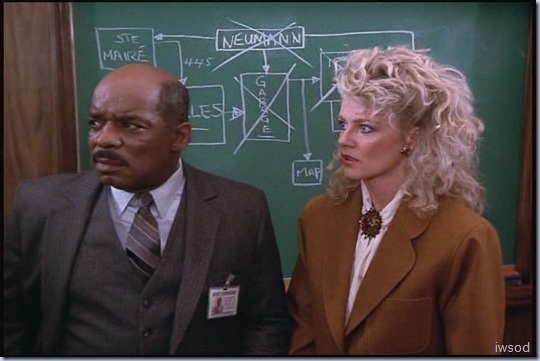 Francine: He looks terrible. [Not possible!!]

The scene ends here. What do you all make of Billy here?
I think here is a scene that reminds us of the brutality of the agency… In the Pharaoh’s Engineer we had the agency being described and portrayed as some kind of family. Well this never really worked for me. As lovely as Billy is – there are rules.. and he is restricted. I find Billy’s quick conclusion here to cut all the civilians counting on Lee loose pretty disappointing.. but.. this is the reality of the agency.. Lee doesn’t like it, he fights for his 24 hour window – but he doesn’t hold it against Billy. (I totally would have.. but then, that’s probably why I’m not an agent haaaa.. I could never work at IFF!) I think Lee knows the limits of what Billy and Francine can do at the agency – and he doesn’t even expect them to go above and beyond for him. Not like Amanda would.. I’m not saying they aren’t close – but with Lee and Amanda it’s different.. Lee has never gotten the loyalties at the agency confused – he will go above and beyond for others [like say Walt (if thoughts could kill) or even Billy] but he doesn’t expect anyone at the agency to do that for him.
At least this is the way it is so far in this episode.. will Billy and Francine do more and help more? I honestly have no idea.. I just know that there’s a lot of people (civilians no less) counting on Lee right now, and Lee needs help to be able to protect them. He is physically not up to the task. That Amanda would help at this stage is to me a given – but will Billy and Francine help? I look forward to finding out!

So here’s a question for you all.. can you guys name all the people who would have been on the barnstorm list? [lol I know I say this alot.. lol but this would be a great post to revisit previous guest stars!]Would Raoul from ship of spies have been on the list? and how is someone in the barnstorm network different from an asset?