Whoo hoo! I can’t wait to see how Amanda reacts to Lee arresting Will Towne! [At least I think it’s Will Towne..]
Back at IFF, Billy is heading into his office followed by Amanda who is charging ahead of Lee.. tee hee.. this is gonna be good!!

Billy: The FBI has lost Towne in the system which means he’s in our Interrogation Room… 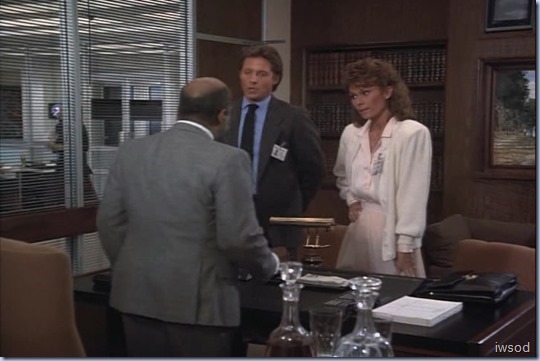 (Amanda dumps her briefcase on Billy’s desk and puts her hand on her hip.)
[Whoooo she’s ready for a fight!]
…. and we can keep him there for 36 hours.
[36 hrs with no charges? geez!]
Lee: We’ll owe them for that.

Amanda: Well we already owe him for that!

[Whoa! Amanda starts straight in with the raised voice!! You can just tell that Lee and Amanda have been yelling at each other before they even got to Billy IMHO!]
Before Lee can respond, Billy cuts them off. 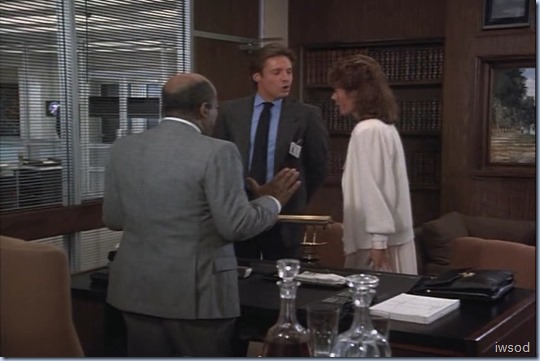 and begin to take their seats..very slowly…

It’s like they are both watching each other to make sure the other sits – because if the other doesn’t sit then they don’ t want to sit either! 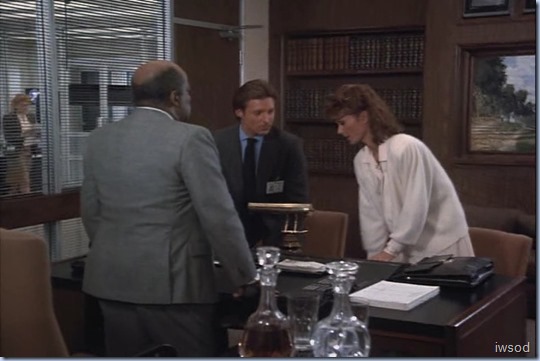 They carefully take their seats at exactly the same time. Can’t have one of them higher than the other!
[I love this!! It highlights the power struggle that’s going on here perfectly!]
Billy, incredulous continues: …What is it with you two? [Ohhh where do we start?! ] 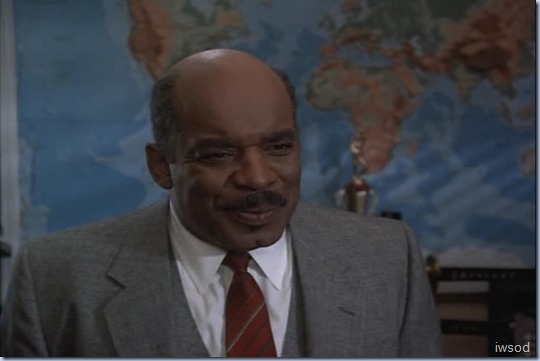 Lee immediately shoots up out of his chair and back onto his feet – Amanda jumps to her feet too! 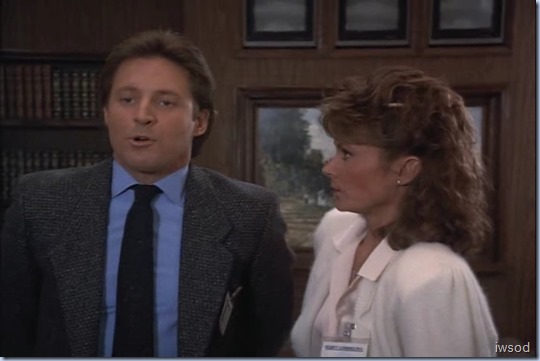 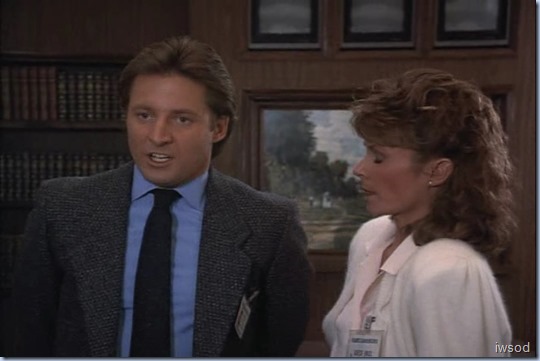 …are clouding her professional judgement. 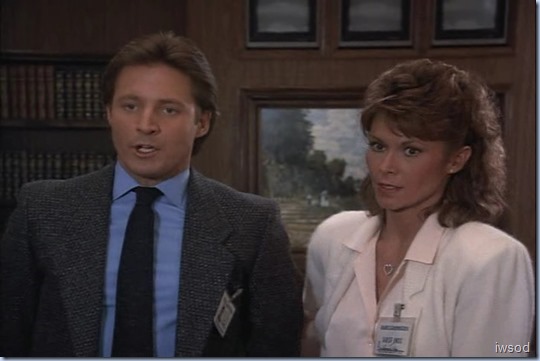 …need to always be right…

…is about to cause this Agency to make a serious mistake.

[Oh my gosh.. the way Amanda says AAAAAnd Mr Steeetson!!!! as she swirls around to look at him is flippin hilarious! How dare you call me Mrs King!!! grrr!!!!
It’s sooooo interesting what each of them identify as the problem here..
Lee- Amanda’s professional judgement is clouded by personal feelings.
Amanda- Lee needs to always be right.
Do you think they are accurately seeing what’s going on here? I do love that Amanda does not accuse Lee of having his personal feelings cloud his professional judgement – she just says he has a need to always be right! lol!
I cannot wait to chat with you guys about all this!! ]
Lee: I made a serious mistake by listening to Mrs King… 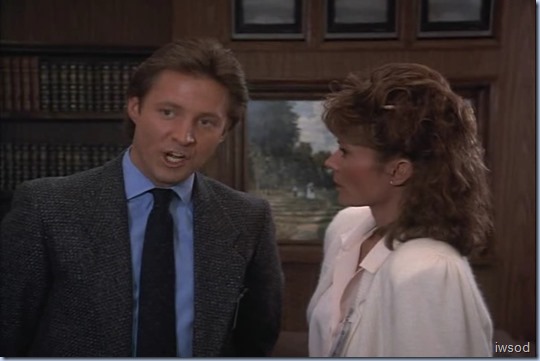 …an inch of losing the guy!

[Umm when exactly did Lee listen to Amanda??!!! I blinked and missed it!! Lee IMHO is pretty blind here!! Blinded by intense emotions!!!!]
Amanda again doesn’t wait for Lee to finish talking and interrupts him. All bets are off here pal!!!

As she interrupts we see Billy look from Lee to Amanda.. lol he’s taking it all in.. and trying to figure out what’s going on.. with Lee and Amanda and with William Towne!
Amanda: That was obviously a set up! [Agree!! Very obvious!]

Lee: Oh there she goes with her fantasy frame-up theory again! 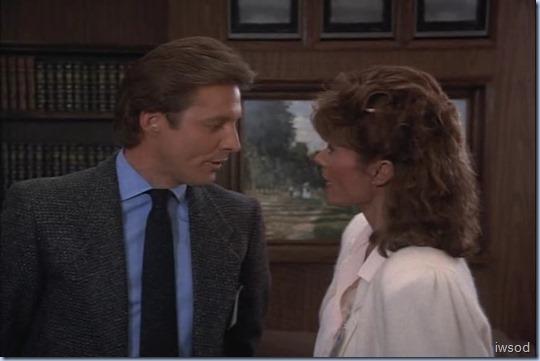 Hoooo haaaa at the dismissive look up and down Lee gives Amanda to make his point.. a bit Grrrr… Plenty of sexual tension goin on here- you think? 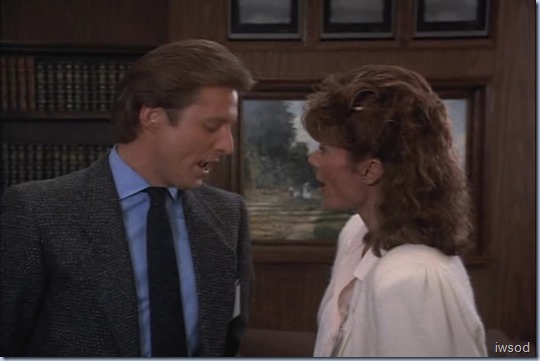 [They’re totally talking over each other here.. in each other’s space.. and it’s flippin awesome!! haaaa]

Amanda: It’s not a fantasy!
Lee: Then back it up! 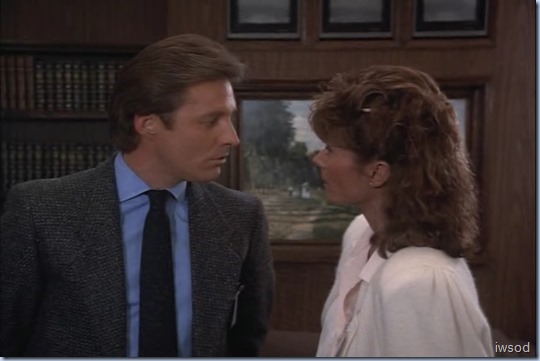 Amanda: Oh please! How can he have possibly known those joggers were gonna come down the street?!

[Oh music to my ears!!! An smk coincidence that wasn’t a coincidence!!! So obvious it’s ridiculous of Lee to call it a fantasy!]
Whoa – the yelling gets louder and Lee yells over the top of Amanda..
Lee: He didn’t know it was going to happen so soon!
[huh??!!!]

Amanda just keeps on going – Lee yelling or not – she’s on a roll and can’t stop!! whooo hooo!!

Amanda: We caught him two blocks away!!!

Whooo hooo! I love Amanda here!! lol.. Lee totally deserves it – I get the impression that she isn’t just fighting for herself and her standing or role or whatever, she’s actually fighting for Will Towne, a man who she believes is innocent – As his agent of record, he needs her to shout for his innocence.
Maybe it’s just me- but without that, I don’t think Amanda would have gotten so worked up.
It seems to me Lee doesn’t have an answer-except to just glare at Amanda.. 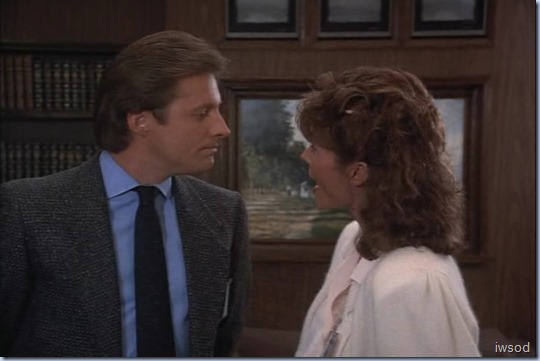 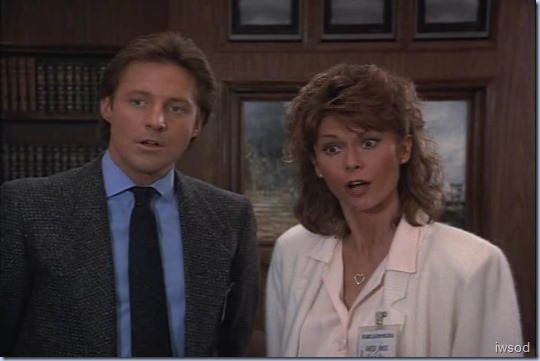 Amanda much quieter: …Yes Sir.
[haaa that is KJ brilliance right there so funny!]
Billy (sounding very measured and reasonable): Now I agree with both of you… 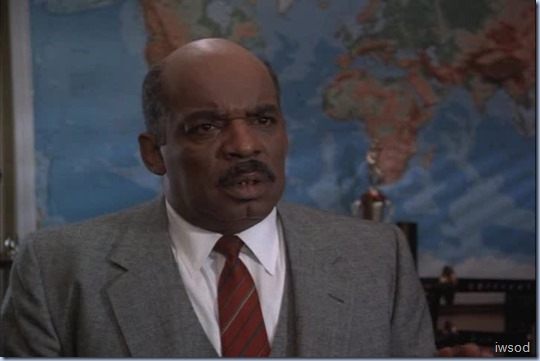 …and I disagree with both of you…

…I’m going to wait on the lab results of your samples.
Amanda: Well Sir, that could take hours.

Lee: Oh I agree with you there…

[rofl! Amanda can be seen glaring at Lee and cursing him as he interjects with his temper]
…Now listen Billy, we have got to get rolling with a dose of damage control here… 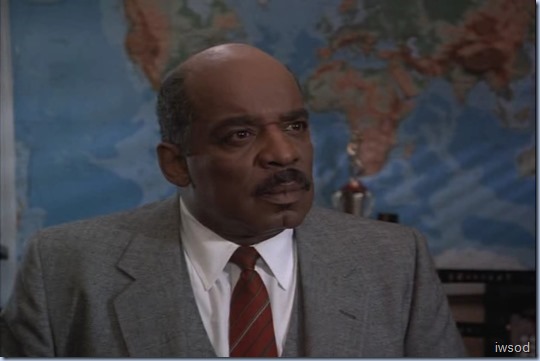 …Towne has compromised our codes!

Amanda: Oh—
Lee: Now we’ve got to call State or someone and tell them their communiques are being passed around the Kremlin!
[Lee sounds so certain!] 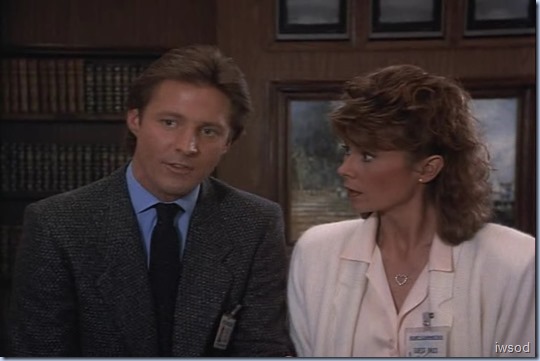 [The way Lee talks to Billy here doesn’t do him any favours IMHO – can’t wait to hear what you all make of this fabulous scene!!
Lee talks to Billy like he’s dumb.. IMHO. Like he wouldn’t have thought of that?!]

Billy: If we do that Scarecrow, if I blow that whistle, there’s no turning back. Get me something more!
Lee: What?
[You know Lee.. ‘back it up!’ Lee is so certain he is right and Billy is wrong to even wait for any more answers.. oh dear.. ]

Billy: I need to know if this man Towne is an American citizen at least.

Amanda: Well Sir, he was born and raised in Culpepper. 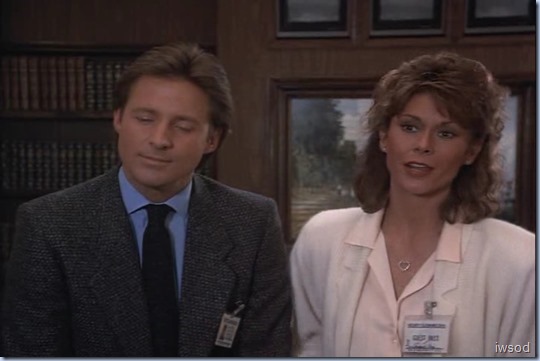 [haa haaaaa too funny! Lee’s reaction is hilarious- oh you trusting beginner you!]
Lee: Or so he told you.

Amanda: Pleeeeaaassseee!!!!
[grrr she practically growls this! Lee she’s wishing she had put that other more massive cactus on your seat earlier! 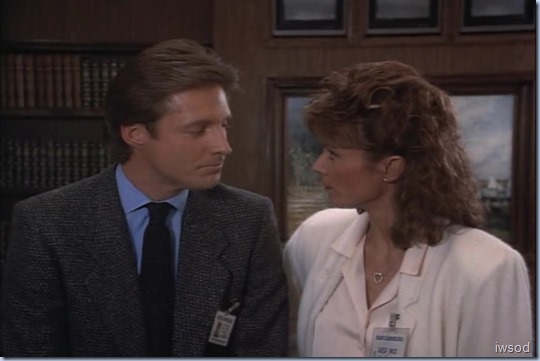 Lee responds to Amanda’s growl by just glaring back at her…
Hooooo haaaa!!! don’t touch anything metallic or you’re going to get an electric shock! 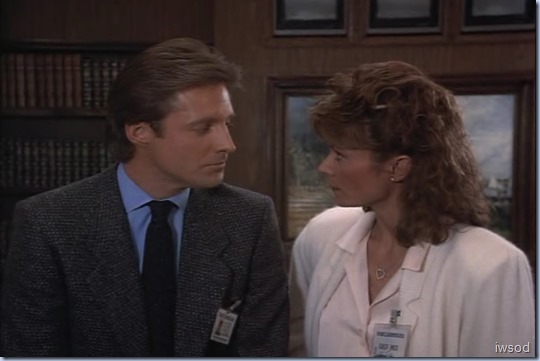 These two are electric here with the sexual tension!!!
Billy: Now please,… 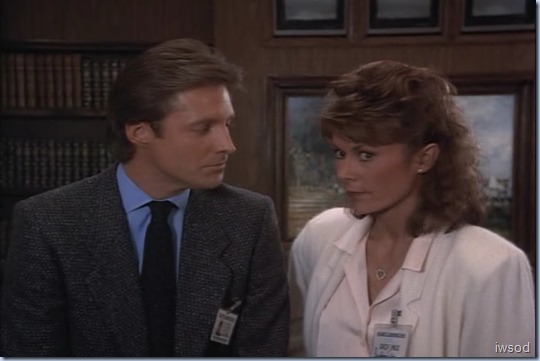 …just put your personal differences aside… 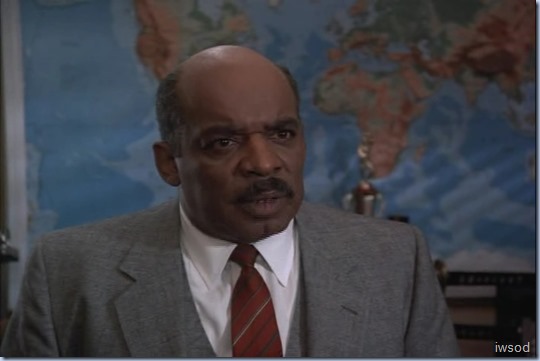 …Get me something more conclusive by tonight…

…or I will have to blow that whistle.

Billy gives them a head toss.. ‘put aside your personal differences’  not professional differences- how interesting.. so Billy agrees there’s some ‘personal’ going on here! 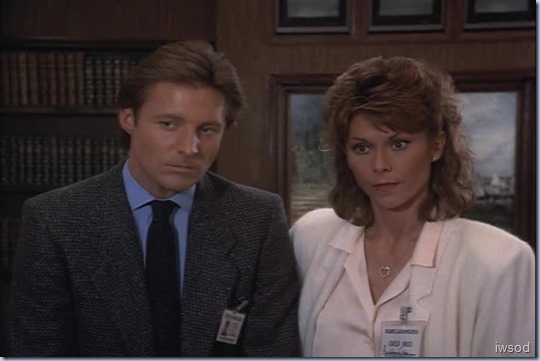 With this the kooky music kicks in.. as Lee is all macho power play here turning and trying to out glare Amanda..

Lee totally gets in her space…

Seems since she hasn’t backed down here he tries on a little physical intimidation.. 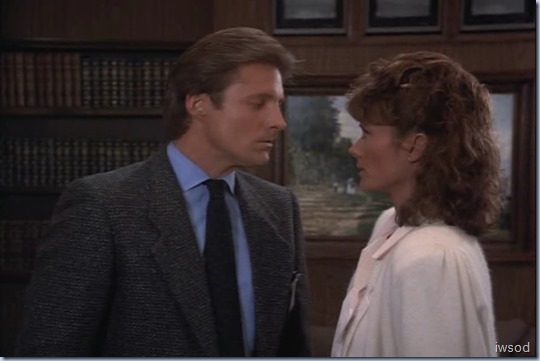 Forget it Lee.. She’s totally unintimidated by you- she made you soup for five days.. and she knows you would never hurt her or anything!

In silence, Lee then turns to Billy.. 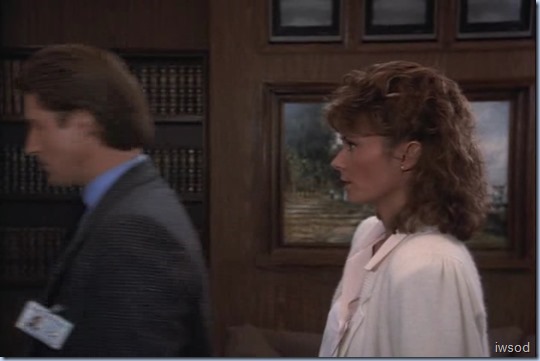 and then turns to leave. 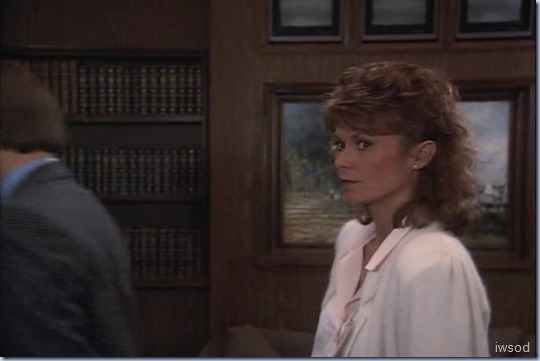 Love the look Amanda gives Billy as she leaves!

We cut to the wide shot, where Amanda gives Billy a smile, picks up her briefcase and leaves.. Determined to help William Towne who she believes is innocent!
The briefcase is an interesting addition here huh.. kind of underlines that she has more professional responsibilities here with this assignment.
As they walk out Billy’s door.. we can see Billy is pondering – what the heck just happened here??!! 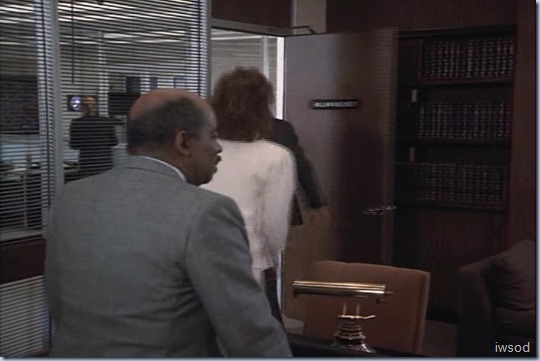 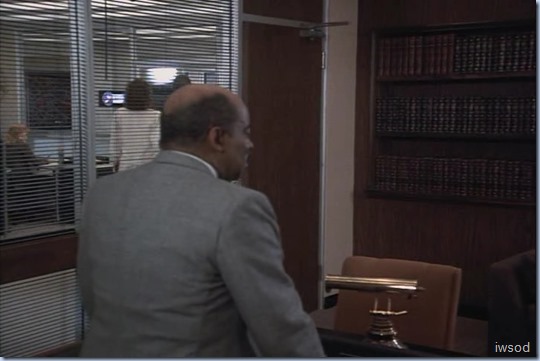 I think he finishes this scene with a bit of a grin.. but.. I can’t be sure.. what do you guys think?

I recommend watching this scene with the volume turned down..  grrrrr!!! Hooo haaaa!!! It’s getting hot on SMK!!

This is such a steamy moment.. it deserves a gif so we can enjoy it on a continual loop 🙂
You know.. for all their disagreement – their bodies are perfectly in sync 😉

Yoooo Hoooooo!!!! Transfixed by that gif?!
Slap! Are you with me here people?!
You know, I don’t really know what all this fuss is about. Why don’t they just ask TP what he’s heard? I bet he knows!

I bet he knows about Francine too!  tee hee..

Sooooo come on everyone I’m busting to hear what you all think!!! do tell!!!!!