So Lee and Amanda are searching Wally Tuttle’s condo..
Amanda seems to have well and truly gotten over her concerns about searching through another’s belongings

More signs she’s growing as an agent of record!

Gloves? why are they wearing gloves? they never wear gloves!
Suddenly SMK has gone all CSI this episode!
Lee collects physical evidence while Amanda rushes around searching.
Lee: Finger prints, hair samples, carpet fibres – this should give us enough to work with, believe me.

Amanda: Yeah, hopefully we can prove that Wally Tuttle isn’t Will Towne.
Lee: That Will Towne is leading a double life…

[Aie! Lee.. doesn’t that make it a triple life?! Isn’t he suppose to also be a Russian who isn’t really an American? I guess that clue didn’t really catch on?]
(Amanda holds a stack of photos..in a close up we see Wally Tuttle hugging a ladyfriend) [Hmm Cindi maybe?!] 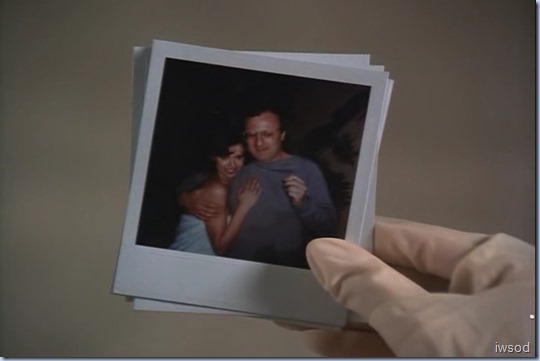 …Look, Amanda, the valet saw him and the elevator operator. [Doesn’t prove anything!]
Amanda: Yeah but the piano player wasn’t sure.

Lee: Let’s just stop arguing about this shall we?… 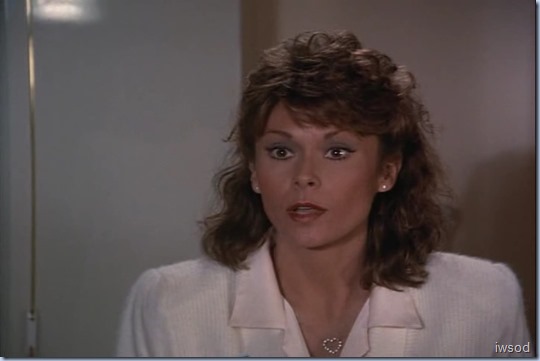 [Lee seems to have lost his temper already.. while Amanda is still in control of hers. Funny.. and Lee seems to think he is the supervisor in this relationship?! He isn’t looking too supervisory at the moment!]
Lee: Towne – Tuttle – whatever!… 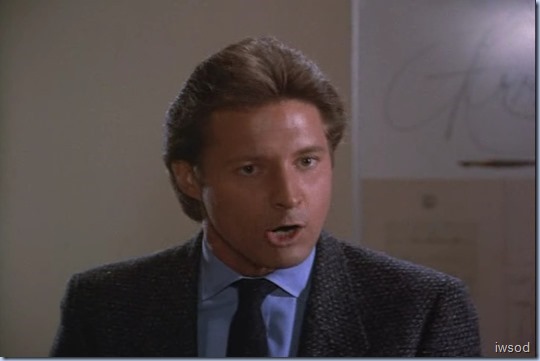 …Let’s just take him down to the piano bar and get this over with once and for all!
Amanda: That’s a good idea.

Lee: You agree with me?

]
Amanda: I agree with you there. 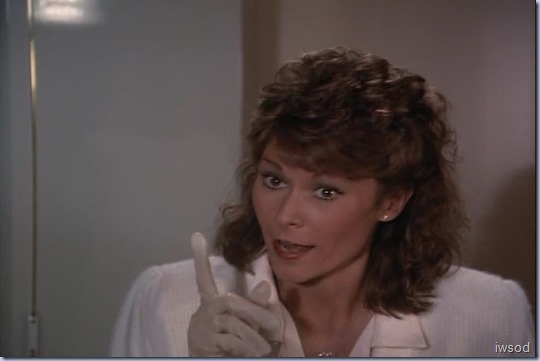 Lee leaves, Amanda fixes the lamp and then follows..
[Lee doesn’t put her off from taking care with her work – the lamp is left as it should be!

Amanda: (Very quietly repeats) Come on.
And heads out the door..
The next thing we see Tuttle/Towne/Popovich whatever (till I know who he is I’ll call him PopTutTowne) down in the bar and he’s not happy.
PopTutTowne: This is ridiculous. You’ve never met me before,…

…I’ve never met you!
So he’s talking to Jango, and he’s not happy that Jango said he was Tuttle.. [that’s Tuttle Tattle!] – we see Lee and Amanda arriving behind him.
Sooooo what is PopTutTowne doing there? Lee did say they’d take Towne down to the bar.. but if they called him and asked him to come – why aren’t Lee and Amanda already there? and why is this man already saying he isn’t who the piano guy said? Hmmm or maybe the Russians actually called him and somehow convinced him to be there.. or lol I guess if this is Popovich/Tuttle they would have ordered him?! haaaa anyone’s head hurting? 🙂

Amanda: Now Mr Hart, we know that this is Will Towne… 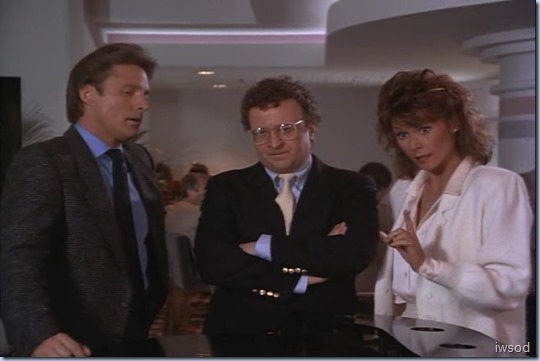 …Are you telling us that you know this gentleman as Wally Tuttle?

Jango: Whoa! They must have you by your W2’s pal.

Towne: How can you sit there and pretend to know me?…  [Lee seems to look at Towne like he’s a scumbag liar here.. what do you think?]

… I’ve never been in this place! 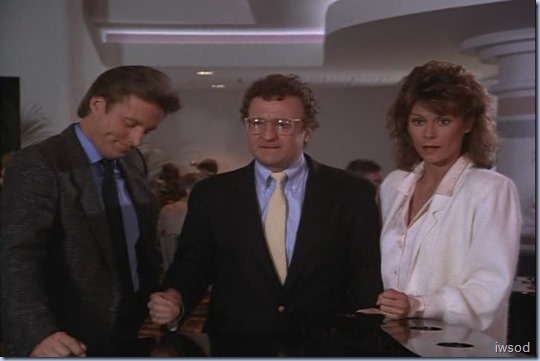 Jango: I hear you Wally. Half the guys come in here have never been in this place. (laugh)

Yet again – nothing proves or disproves anything.. Towne seems to be in a situation here where Jango can’t be proven wrong.

They should get this PopTutTowne’s hair sample and fingerprints to compare with Wally Tuttle’s ..  Did they have DNA back then?! I’d look up the year but no time.. I’ll leave it for someone else if you’re interested!

Next thing, we see Lee, Amanda and PoptutTowne exiting the building..
PopTutTowne opens the door for Amanda.
Amanda: Thank you.
PopTutTowne and Amanda exchange a smile.. 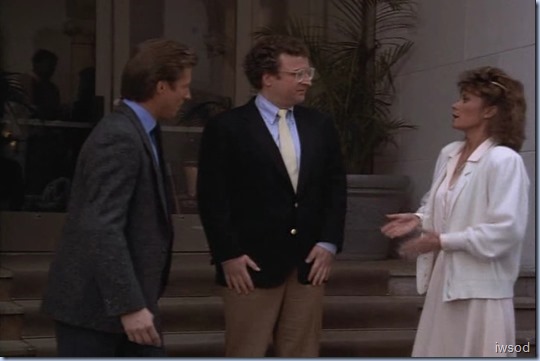 Lee is rather stern when he stops them and makes a demand..
Lee: Mr Towne, would you wait here for a minute. Amanda?
Amanda to PoptutTowne: Excuse me…

(Lee and Amanda walk to one side) …What is it?
Lee: You seen enough?

[Eh?! How can he be so certain?! Lee really is not thinking clearly here! and he’s too emotional – lol yes the two are probably connected!]
I love how Amanda takes his gruffness in her stride..
Amanda: Yes…

…Did you see him push the door marked “pull”…

…– he’s never been here before!
Lee: Jango identified him! 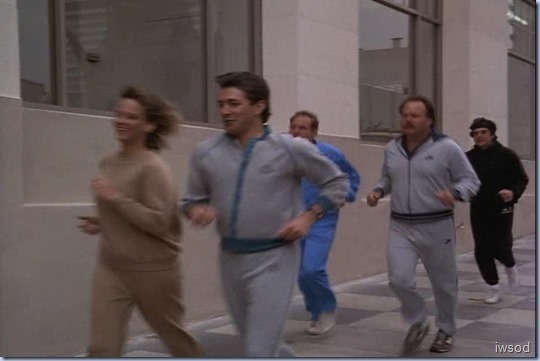 We cut to a group of joggers making their way toward Lee and Amanda.. while Amanda continues.
Okay – now she’s beginning to get more worked up!
By now she usually would have moved to calm the situation or appease Lee in some way.. but not here!
Amanda: I don’t care, I think you’re making a big mistake.
Lee: Well I think you are way out of line here!
Bam! We see the joggers run straight into Lee and Amanda..
I’m delighted to see Lee instinctively tries to put his arm around Amanda here as the joggers impact.
[btw – I’ve often overlooked Lee’s dialogue about Amanda being out of line -because the joggers interrupt the moment.. but it’s interesting that Lee thinks it is ‘out of line’ for Amanda to think he is making a big mistake. Apparently this is not in line with how Lee believes things should be!! and feeds into that whole idea that Lee is viewing Amanda as a supervisee role.. definitely not the Agent of record!] 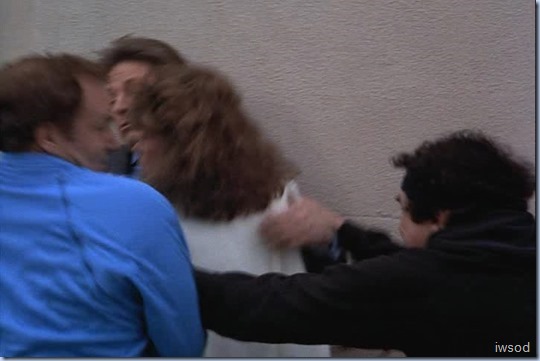 lol the joggers start punching Lee and I don’t know….. 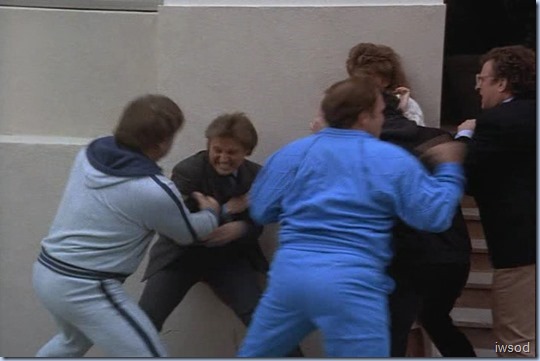 …what they’re doing to Amanda.. holding her arms or something? or maybe they are calling her names..
PopTutTowne approaches from the side, confused at what the joggers are up to.
Towne: Hey, what’s going on here?
One of the joggers grabs Towne (By now I am guessing this is actually really Will Towne the good guy who loves his wife)

KGB gang: Come on, we’ve got him, let’s go, let’s go! Move it!
They run off with PopTutTowne – okay.. they kidnap him!

Uh oh.. things are looking pretty bad! On top of everything it seems the Russians may have run off with both Lee and Amanda’s cars!!! They were parked next to that entrance when they went in there and now they’ve both been moved!! eek!!! These Russians are so cluey! Maybe they think Lee will exchange a captured Russian spy for his vette?! Waahhhaaa

Amanda: You alright?
We see the joggers drag PopTutTowne around a corner. I think he was really Will Towne..
Then we see a black Limo driving toward Lee and Amanda. Uh oh.. this can’t be good!
Lee sees the guy aiming a gun at them.. 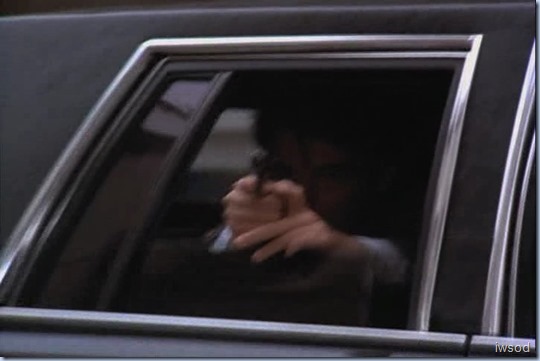 and pulls down Amanda with him to take cover..

[okay this is soooo not KJ he is filming this scene with! that is one fugly wig!]
Lee: Get down!… [so polite of the baddie to aim high!]
…You okay?

Hoooo haaaa! Grrrr!!
Amanda: I’ve been better.
Lee: Okay, go call for some back-up. Quick!
[Well… this is an improvement on the last time I remember a moment like this: sour grapes.. 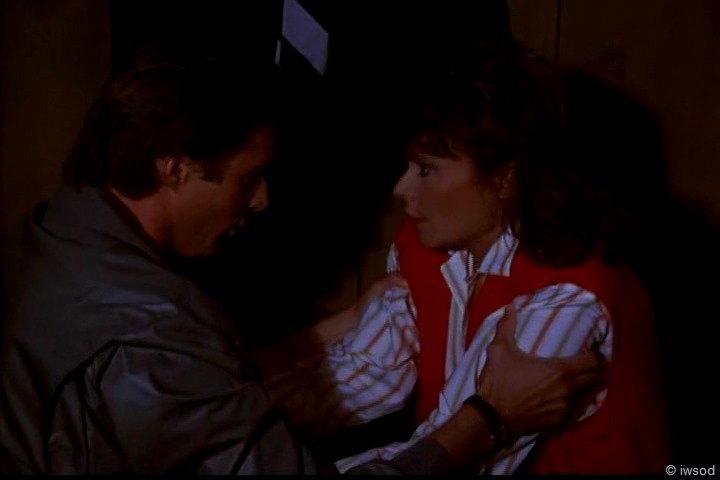 you know where Lee says “Now what do I always tell you to do?!”
Amanda: “wait here!”]
Not this time 🙂
Amanda: Right. 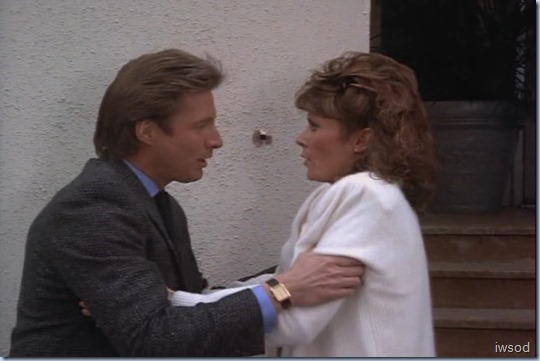 Amanda heads back inside, and Lee runs after Will Towne and the joggers.
We see Lee turn a corner and slow down.. he’s found PopTutTowne!
He’s looking like he is trying to hide from those joggers.. I guess Lee would think he is hiding from Lee..

Lee hides from him,

PoptutTowne doesn’t put up a fight..
Lee: Okay Mr Tuttle, you should have stuck with your Russian friends ‘cause now you’re stuck with us.
PoptutTowne lets Lee frisk him and he goes quietly. [Interesting that Lee calls him Mr Tuttle. He really has fallen for Gregory’s plan! ]

So is this Will Towne? or Popovich? Did the Russian joggers do a swap? hmm.. I don’t see how they could have known what Will Towne was going to wear that morning..
I guess Wally Tuttle was an invention of Popovich’s to add to the confusion about Will Towne?
I guess if the plan is to get the Americans to swap Will Towne for Francine – this is likely Will Towne, who they kidnapped for a few blocks and then released.. now they’ve set him up as a Russian spy..

I thought Amanda’s pointing out he pulled when he should have pushed or whatever was good evidence.. and heck.. now they can hopefully actually do the CSI stuff and do hair samples and fingerprints no?! this is smk… so maybe that was all for show?!

poor smk.. it may surprise me yet 😉

I can’ t help but think: Wait till Amanda hears that Lee has arrested Will Towne like this!!!! whoooo!!!! She is not going to be happy!!! I’d say this will be the final straw for her!
And – whoooo haaaa at the intensity there as Lee grabbed Amanda by the arms – you nearly died.. kiss her!!

haaaa…. actually.. I am kinda glad their first kiss isn’t an angry/panicked one!

I’ll wait! take your time you two! work through this – and I’ll just enjoy the journey!

Okay- if this was Wally Tuttle, why would he have gone off with his Russian friends in front of Lee and Amanda?! The joggers thing seemed so contrived and.. then we have the drive by shooting on top of it all.. for what? If it was so PopTutTowne could escape Lee and Amanda (or lol maybe just Lee), why would he then be wandering around alone a minute later?! he’d be totally out of there no?!
Have I missed anything? I’m just thinking this through as I type, and am finding this plot is one we need to keep track of.

What’s the hardest plot you’ve found to follow? what ep? I’ll vote for Sour Grapes and those bottles of wine and Mr Twilley! man.. my head hurt! I needed to drink a case of wine just to cope with it 😉  – the errr heroine was not included!
Phew this is a big post!!! gotta run!!

That’s it from me for the moment.. I cannot wait to hear what you all make of this!