15/15 Season Three, Episode 19: The Boy Who Could Be King- Scarecrow and Mrs King

Back to Jasands for creative food & beverages, with some Jazz thrown in.
We find Eddie being wheeled around..
King Eddie: It’s true! Cap D’Far was first settled by swashbucklers…  [French Swashbucklers maybe? 😉 ]

…Mutinous swashbucklers mind you, but bloody big heroes all of them. Well, we’ve all got it in the blood.
Terry: Guess they weren’t too hot at dodging bullets.

Sandra: Your father always took chances. Some things never change.
[I imagine it’s a relief for Sandra to be able to talk about his father to Terry.. ]
King Eddie: Yes, and some things do. Did you ask your Mom?

Sandra: Ask me what?
Terry: Well, the King –
(Terry catches himself and smiles.. Eddie smiles a little too.) [Awh!]
Terry corrects himself: …Dad – wants me to come to Cap D’Far. I’d really like to go, Mom. 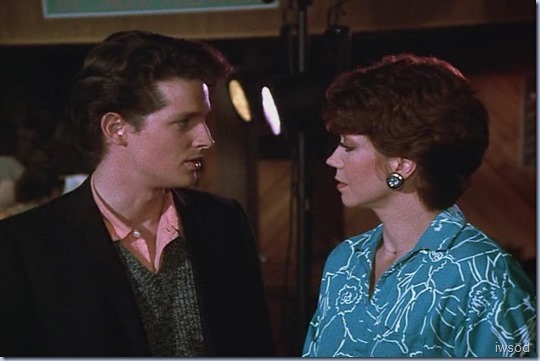 Sandra: For how long?
Terry: A week, in June.

King Eddie: Yes, the surfing is rotten the rest of the year… [rofl it’s only good for one week in June?

]
(to Sandra): …What are you doing in June?
Terry watches his mum smile a big smile.. 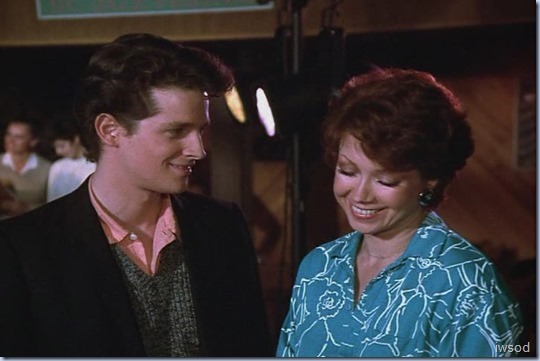 [do you think he is wondering if his folks will reconnect?!]

And they all smile! 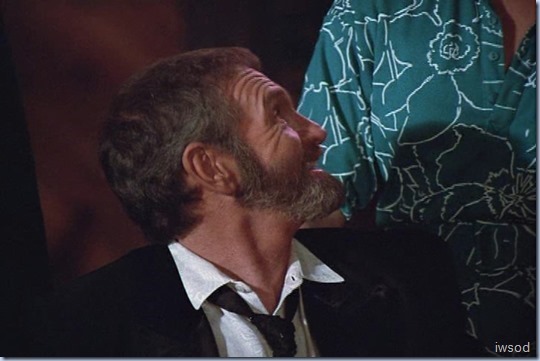 Eddie is certainly an expressive guy!
…Hey Billy! My man! Hey, it’s an hour before curtain, bro.
[Why do I suddenly have Phil Collins in my head? Oh yeah.. Billy!!! Billy don’t you lose my number! has someone done a fan vid of that?!  sorry! I digress. Focus Iwsod!]
Just off to the side, Lee and Amanda join them.

Whooo see Lee’s arm around Amanda?!!
Billy: Sorry Eddie, Billy Bluenote is retired.
[I’m glad Kiwismh was able to transcribe what Billy said here because all I could hear was blahh blahhghaogayhgogh.. as I saw this: 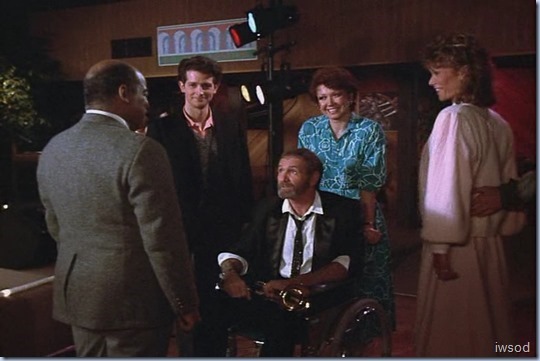 This arm still around Amanda.. 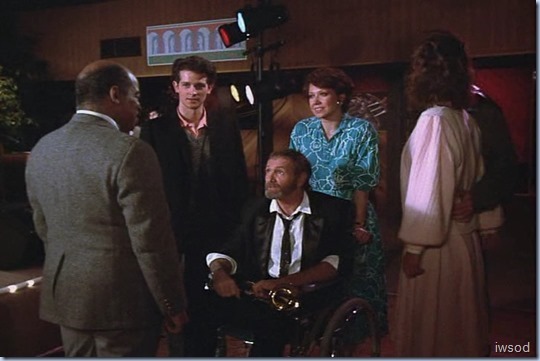 And as Lee comes around the side..

See that? Amanda goes to put her arm around Lee also! 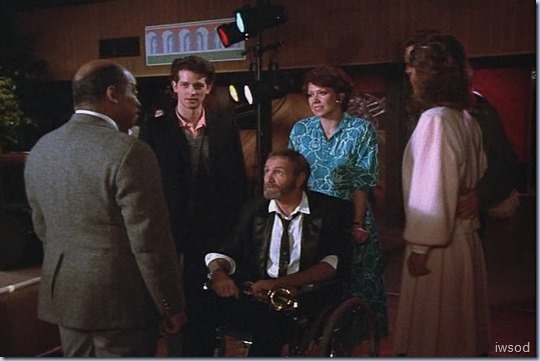 Squeeeee!  Okay focus Iwsod.. someone is still talking.. ]
King Eddie: Oh, well, not if his country wants some of the tantalum I’ve got. [whoo blackmail! ] 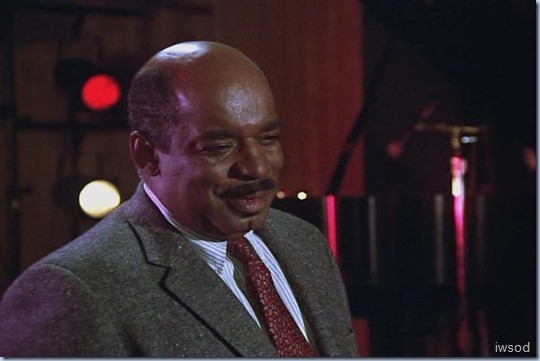 I think Eddie might be partly serious!
Billy looks over at Lee.. with a smile.. I’m thinking yes way. You? I think Billy just needed an excuse to keep playing 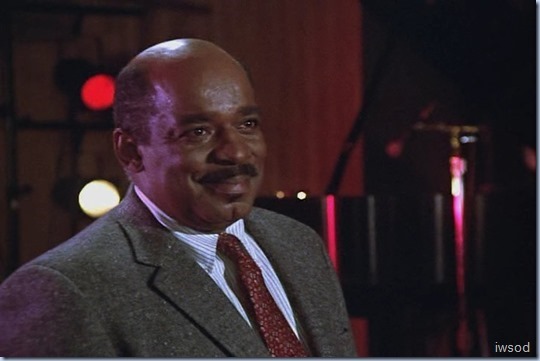 Lee looks back at Amanda.. 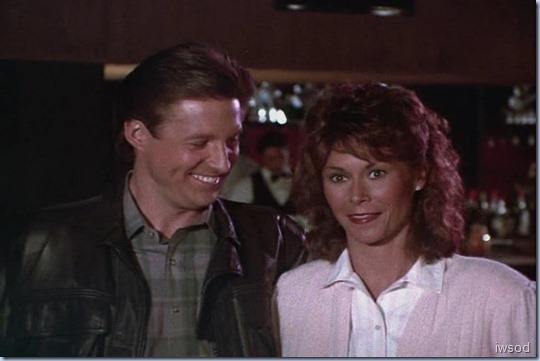 They both look at Billy. Aie. they’re such a couple! Get together already!!!

I gotta say, Lee especially is looking very happy with life at the moment!
We get a quick edit, to find Billy not resisting the blackmail.. at all!

[errr for the sake of all that tantalum! ahem.. ]

Lee from the audience calls out: 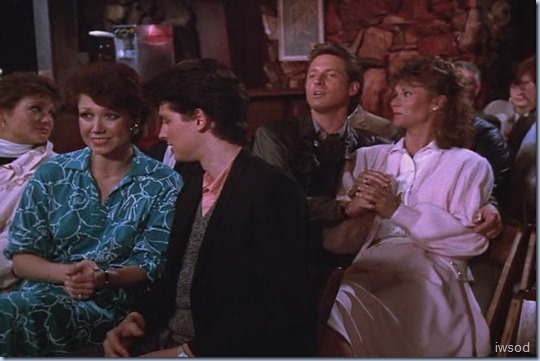 (Lee gives Billy a thumbs up)

Oi! My oh my! what’s going on here??!!!! Just look at how they are sitting together. she’s practically on his lap, enveloped in his arms.. in front of Billy??!!! I’ll come back to this..

Billy: If we’re going to keep diplomatic relations with Cap D’Far, you’re gonna have to learn how to play this thing. 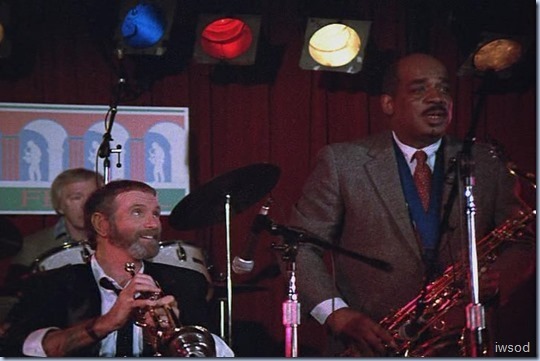 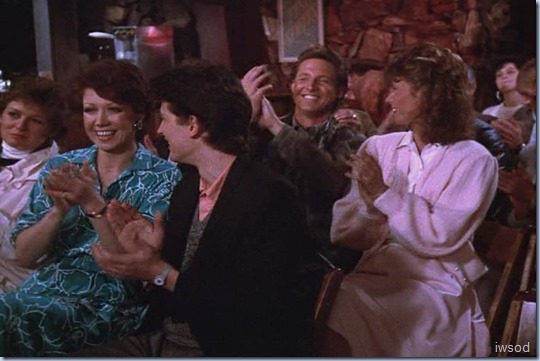 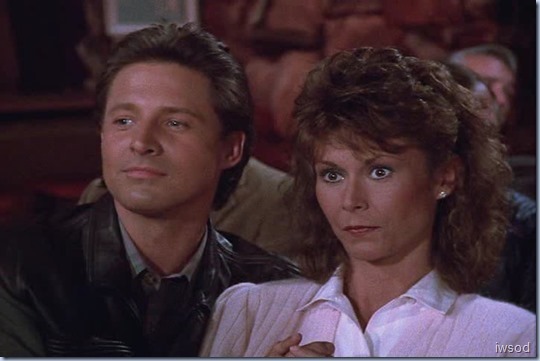 And we cut back to Lee and Amanda.. enveloped together again.
Amanda turns to look at Lee.

So Lee turns to look at Amanda.

Amanda quietly: I got a feeling everybody’s going to live happily ever after.
While Amanda manages to string together a coherent sentence here… [she’s my hero.. taking a bullet is nothing.. try doing this while Lee gives you that look?! That’s tough!!]

As Amanda says this, Lee takes his time and looks at Amanda’s mouth. 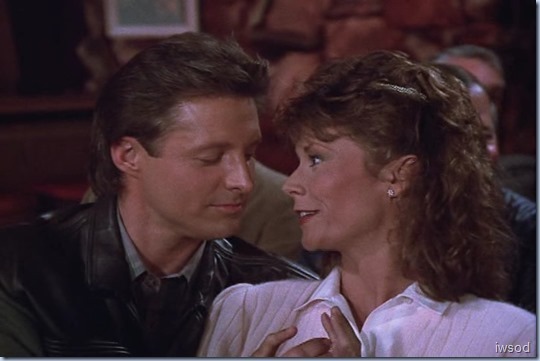 While you’re transfixed by Lee watching Amanda’s mouth – did you see what their hands are doing while Amanda talks?!!
Their fingers are mingling and playing! oh my.. Hooooo Haaaa!

Okay.. seems Lee looks at her lips twice. [yes I can manage to count to two in these circumstances. Just.] He didn’t look at the boudoir magazine twice!! 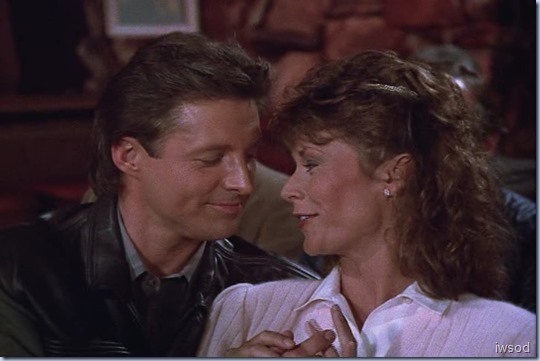 They’re fingers are dancing cheek to cheek! [I always wanted to see them dance again!]

They smile at each other and Amanda leans in.. oh yes.. oh my.. Lee looks at her mouth again! yes one plus two times! (Iwsod can no longer do the maths!) bhugahabnsbawhbaobh

Okay, I can see Amanda is now showing that same contentment and joy – how lovely!

She is freely showing it to Lee too

Not to mention her talk of happily ever after. You don’t get more committed to forever than that no? 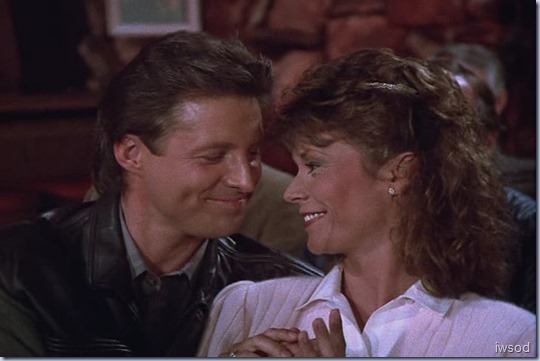 I didn’t think it possible.. but Lee’s grin gets bigger

Lee turns back to Billy to enjoy the show.. and Amanda enjoys the show right next to her just a little longer.

The episode ends with BBN playing his saxophone

When I stop and think about it, this episode tells us quite a bit about Billy.. no? 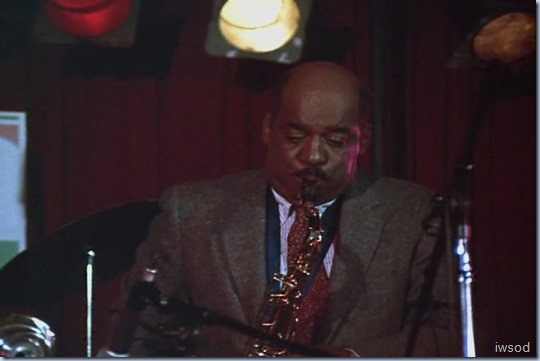 Life’s good! Everyone is happy! Crowley got shot hooray! Beige baddie was so beige he actually become entertaining! and diplomatic relations with Cap D’far are very healthy indeed! Overall, I’ve enjoyed this ep! I wouldn’t rank it a favourite, but there are some favourite moments for sure! thoughts?

Will Sandra and Eddie get back together? I admit, I’m relieved there is no overt mention of this.. that would have been way too OTT fairy tale for me! C grade Grace Kelly and Prince Rainer! I think it’s left open as a possibility..
What do you think?
Would all that Miles Davis and sand still be too much for Sandra? Hmm.. nothing is certain.. except it seems Eddie and Terry have a chance to build a relationship now.. and Lee and Amanda- what are they building?!

I can’t believe how intimate and expressive they are here!! I guess we really didn’t see them much all episode.. and it was building up to this!
I wonder if they are so expressive because they are in public and can’t fully take the leap here and kiss and change everything? Though really.. things are seeming pretty changed anyway no?

Do you ask yourself what’s holding them back now?
I can imagine if I was watching this first airing I would have been screaming at the tv – they’re gonna kiss!!!! and.. Nope.. no kiss! but.. There is still plenty to enjoy… and it seems like any time now they are gonna take that plunge.
Maybe in the next ep!!!!

Still, I can’t shake the vibe that this is a bit sudden.. It’s almost like the words have been said.. but errr.. they haven’t have they?

Okay, maybe they have said the words in an indirect way. Lee offered to co-sign that equals: I’m committed to you for a long time legally?!
And.. Amanda’s comment about living happily ever after – well that’s about her and Lee really isn’t it? so she is saying it too? But she hadn’t said that yet earlier when they were standing there with their arms around each other?!  Sort of?? Gah.. maybe it’s just me but it still seems too out of the blue.  I wonder if something has happened with the episode order here. It’s very much in the back of my mind.. But.. I can’t really form a view on it till I’ve seen to the end of season 3. I don’t really remember what’s still to come in season 3.
Okay had to look it up. There are three more episodes to go till the end of season 3. Wow!!! Not many!!

I can totally see Lee and Amanda stopping off at Cap D’far sometime for some surfing. ahem. And.. attending the coronation of Terry.. while rubbing it in to Francine.. ahem. Sorry I digress. that’s as close as I get to fan fic!

Thanks to Kiwismh for your valiant effort getting this transcript to me in record time. You’ve been my hero!
Thanks also to Learjet for helping with formatting the dialogue. A total godsend!!

Soooo what’s next?
Umm dead men leave no trails – gosh.. I can’t remember it!!!! I look forward to walking through that with you all! Everyone still with us?? or are you cursing Lee and Amanda’s flirty teasing of the audience here and have swooned onto the floor?! haaaa! Can’t wait to hear from you!!!!!!