2/2 Just Walk with me – Through Lee’s Season 2 Apartments! By Silver Corvette

Welcome to Part two of SilverCorvette’s posts on Lee’s season 2 apartment. What will we find out about  Lee’s secret home life? Over to SilverCorvette!

Next time we see where Lee lives is in DOA Delirious on Arrival. 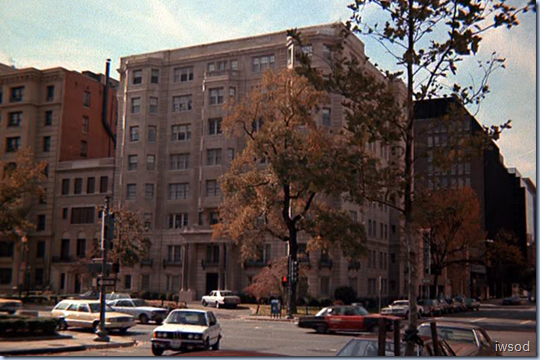 Same building from Season 1 and in ALSALS. Same cars parked outside.

Why are we looking at an apartment bay window ? Lee’s apartment definitely does not have one ! 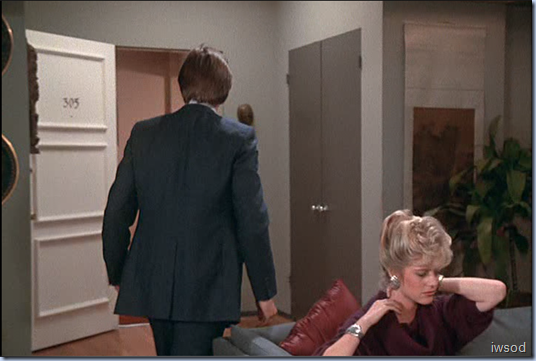 This apartment is number 305, on the third floor ? and the door is white on the outside not the wood colour of the one in ALSALS. 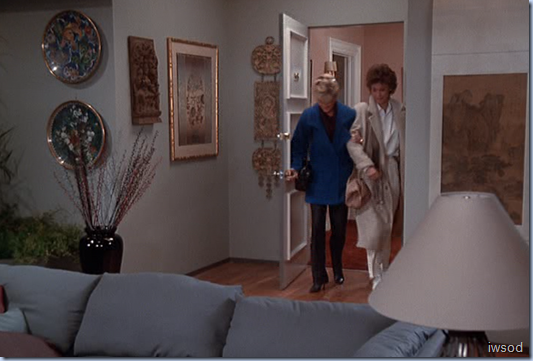 A new apartment in the same building ? This one has grey walls, no coat stand and lots of oriental art. This is someone’s idea of a bachelor’s apartment ?

The hall way outside looks like it has pink walls and red carpet, white apartment doors.

Those long black windows don’t look like they belong to the building shown above ! Now there are lots of buildings close by now, not looking down on the city as in ALSALS.

Perhaps this apartment was lower down and on the other side of the building?

Lots of pottery and photographs on top of the cupboards – oh, look, on the taller cupboard – the photo of Lee’s parents that we see in The Eyes Have It, on his beside table, and a picture of Lee and Billy that is also seen elsewhere. 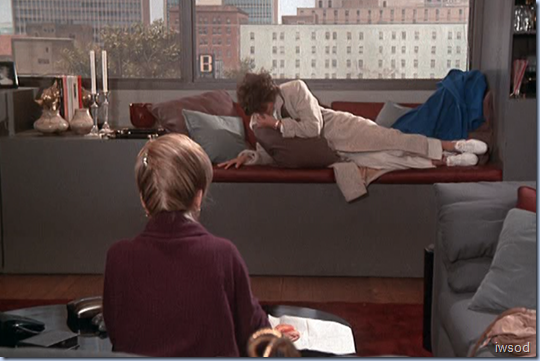 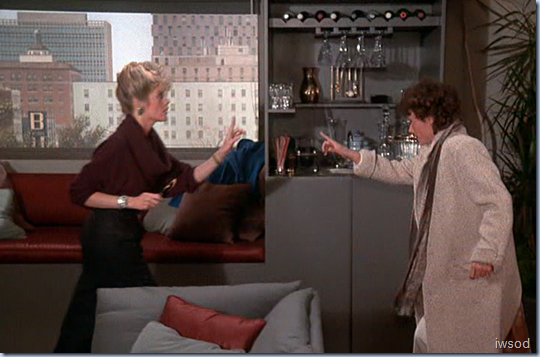 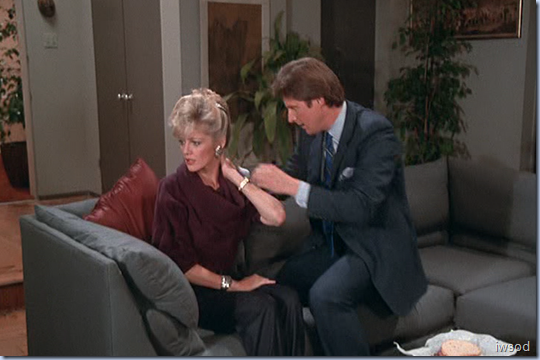 Less plants near the bar but one in the hall, two behind the couch, different wall decorations, same grey L shaped couch !

So why the change to the grey décor ? 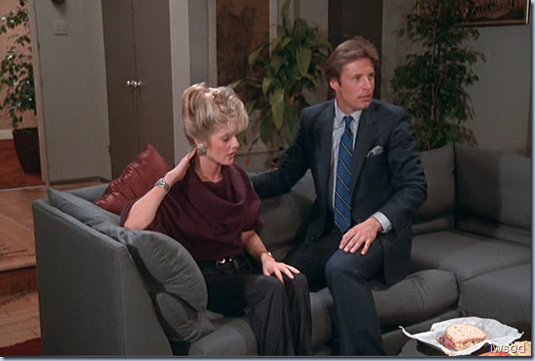 That sandwich will be all dried out by now ! 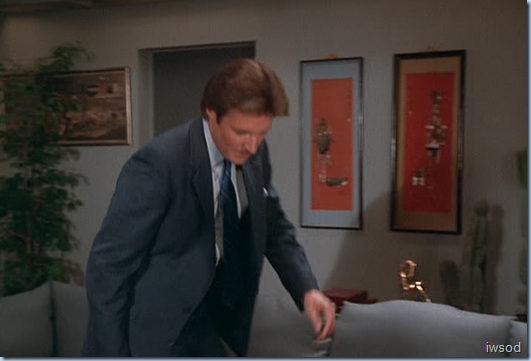 And what’s behind that door leading to the area behind the closet ? And the one behind Lee, here?

Sorry these next ones are blurry because we are seeing through Amanda’s eyes while she is drugged. 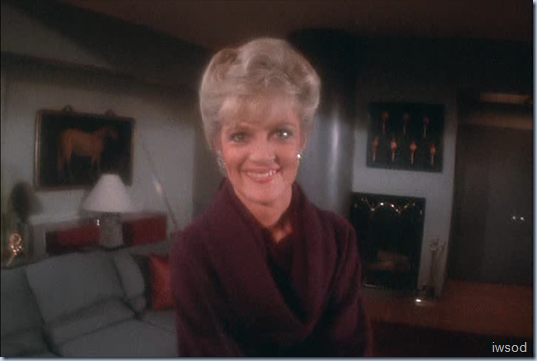 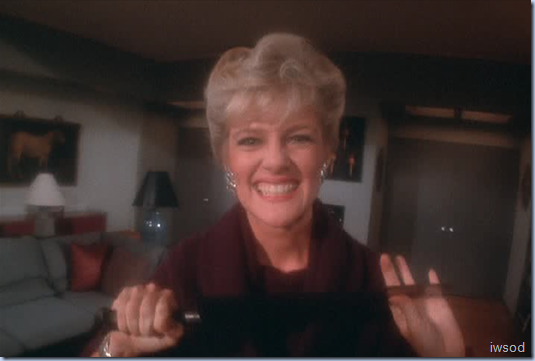 Looking toward the kitchen, the double doors are closed and beside them a fireplace with a very strange piece of artwork over it (but the lizard things are gone from beside the fireplace). And a picture of a horse over a narrow table/cupboard thing. Another narrow table (is this called a sofa table or hall table maybe?) behind the couch with a lamp. No oriental style art in this part of the room ! 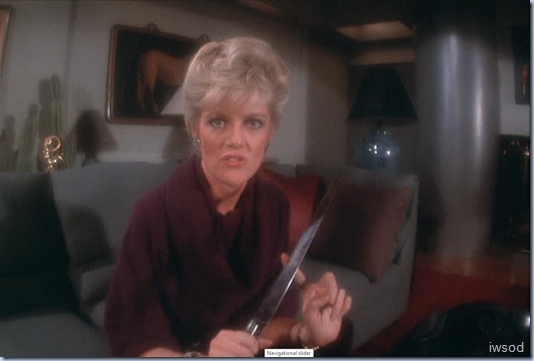 There’s a big metallic column and then another set of double doors (to a bedroom, maybe?)

A large cactus beside the table under the horse. Another table at the end of the couch with a blue lamp with a black shade.

Over the double doors, over the kitchen doors and beside the bar over the plants, seem to be large square ceiling lights.

As we only see one room of the apartments, we don’t really need a floor plan, but I drew one anyway. 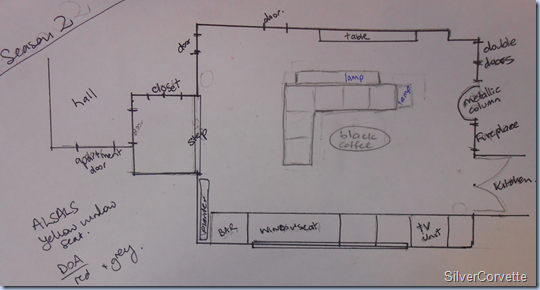 So, Lee moves between ALSALS and DOA? In the same building with the same floor plan, different floor and décor ?

These are the only two episodes where we see Lee’s apartment in this season.

A huge thank you SilverCorvette for your insights into Lee. What does everyone think of Lee’s grey sofa? Is Apartment 4 a more mature home choice?

Next week, we’ll be starting on Part 2 of my (Learjet’s) SMK food posts….Bye for now!

36 responses to “2/2 Just Walk with me – Through Lee’s Season 2 Apartments! By Silver Corvette”