So let’s see.. Francine is having a really really bad day. Now the ruthless assassin Francine said couldn’t possibly be a threat to the event has turned up and taken her hostage!
All the agents stand outside the main ball room watching.
We see the timer moving fast toward zero!

Suddenly, Van Kleef rushes up to the doors and wastes no time – he volunteers his superior knowledge of the premises:

Van Kleef: The rear doors! If he gets out there he could go in a dozen different directions!

Van Kleef is very assertive here! Go Van Kleef! Now he understands the danger he’s on his game!
[That and he’s probably mad at Sallee for ruining his champagne fountain

]
Back in the ballroom, Sallee is hurrying Francine through the room.

I sure hope not, I can always count on Francine to give us a bit of fashion flair- whether I like her style or not, she never fails to be interesting!!!

A few more shots cutting between a rapidly moving timer, Francine and Sallee under the chandelier, Lee standing outside looking all intense..

yes, we must see a shot of that

The chandelier lights start to glow very brightly, the power surge triggered by the timer starting. We see the dial starting to increase..

Billy: Lee, the bulbs are about to blow!
[LOL why did Lee wait so long to move??!!! Love the music here whooooo very intense!!! Has Lee left it too late to act???]
Lee opens the door a crack and yells out intensely to Francine from the doorway-
Lee: Francine! Get down!

[I don’t know why – but that’s funny!!!
What is with Sallee all of a sudden? I thought he was super clever and cool under pressure. But here he is seeing the light bulbs brighten –a sign that his plan has been triggered and the bomb is about to blow, and what does he do? go right underneath it?!!!!! ]

Anyway.. Francine acts immediately.. she knocks the gun away, 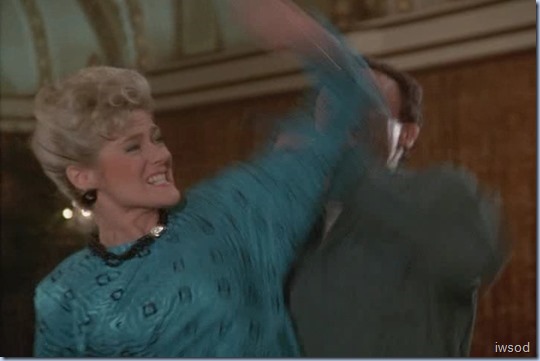 She hits Sallee, and dives under a table.

Sallee: Oohh!
Yeah Sallee just can’t bring himself to crawl under a table himself.. ahem..
We cut back to the crowd at the door panicking that they have no table to hide under

Voice: Get down!
Voice: Watch out! Cover!
Voice: It’s gonna blow!
Everyone ducks..

the power dial moves to maximum.. (wouldn’t the zero have started the movement of the dial toward the max? why did the dial move before the timer went off? me confused.. anyway.. focus on the pretty lights!! whooooo)

Hey! did you guys notice? the chandelier exploded!!!

Wow.. they went for it with this one!
the chandelier starts to fall.. 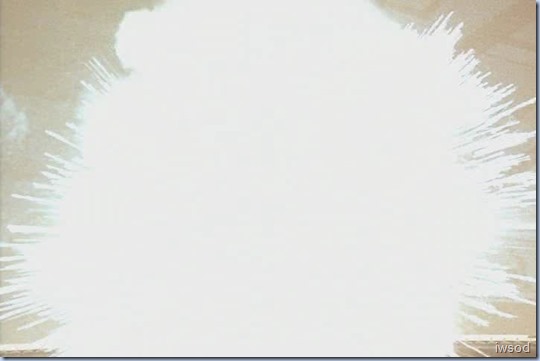 Aaaaand again!!! rofl this is just like those eggs in Our Man in Tegernsee

Oh enough already! haaaaa.. It explodes flying straight for us and it goes to black. 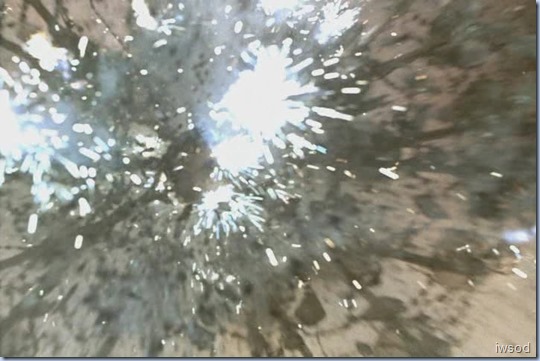 LOL I think they put a few sparklers on there!
The dust is still in the air.. Lee and Billy rush  into the room yelling..

Lee: Francine!
Francine (muffled): Yeah, here!
Lee leans down under the table to help Francine out. LOL that the other tables are turned over.. but Francine’s? No. Francine picked a good table

Lee helps her up.

Lots of noises from Francine as she gets out from under the table, she seems a little out of it.

And dishevelled.. My goodness she has had a bad day! [Then again it’s not so bad – Lee isn’t letting go and.. she is alive! ]
She turns around and sees what’s left of Sallee on the floor.. This is pretty graphic for smk no? 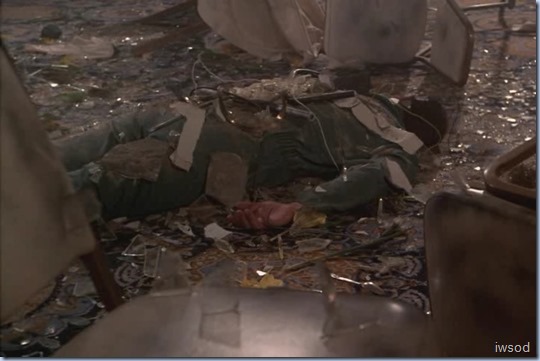 Lee pats Francine on the arm for some comfort.. 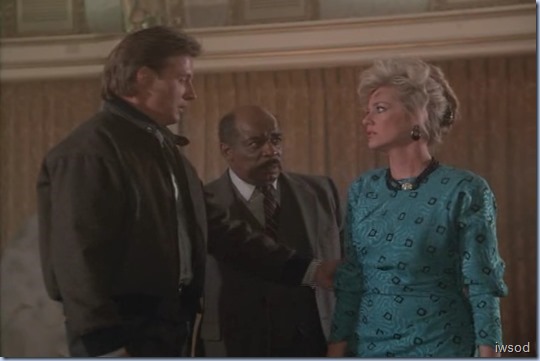 So glad he didn’t give her a hug..
Glad Francine’s okay! Maybe now she’ll be a little more humble?! tee hee..

The scene ends there.. is it just me or is this quite a weird, different action finale for smk? Very strange to have Amanda not in the scene at all…. How does what we got compare with the script? Anyone?

Interesting to have a finale where it’s Francine who is in peril.. there was no major punch up to finish things off and the novelty murder weapon was a chandelier!

What do you think? I don’t mind it for a change up.. but hey – do you think Lee would have gone into the room if Sallee had taken Amanda hostage?

You know what else I find a little unusual – we had Jamie and Phillip heading off to a science fair in the opening scene, showing us how overloading a fuse makes it blow etc. etc.. and they left with Dotty for the fair. But.. there is zero mention of them since. Old SMK would have had Amanda mentioning them, wondering how they are going, trying to call them, we may have seen her call them.. but.. it feels to me that Amanda is melding her two worlds less in this ep. Maybe this is a one off.. or maybe it’s a new trend. I guess we’ll see! thoughts?

I’ll pause here and let Francine fix her hair.. lol.. back with the finish of this ep soon!!!