5/21 Season Three, Episode 22: All the World’s a Stage–Scarecrow and Mrs King

We cut to a fountain in a park, the Krusty comb over, Krutiov himself is sitting there.. [I love how these well known Russian spies seem to enter the country so easily!]

[Whooo is the agency following Valentine? If so, they have their confirmation Krutiov is involved. Hmm that might be too easy

]
Krutiov: Do you always put your left hand in your pocket, Mr. Valentine?

[lol. mind games! what does it mean?! his mother punished him too much?

]
Valentine: Yeah, I think so.

Valentine: I was cornered by a reporter from a local rag on my way out of the theatre.
Krutiov: Well you keep your eyes opened about this so called reporter and your mouth shut… 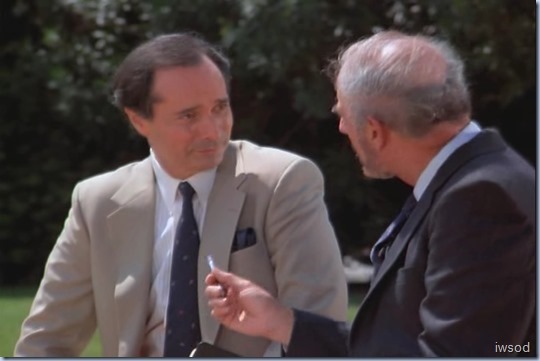 …Now, I assume that Mr. Martinet’s response was as I predicted?
Valentine: It was practically verbatim. It was uncanny. It was like he was some kind of actor spouting dialogue.
[Uh oh… so Martinet is being played somehow.]
Krutiov: In a sense he is.
[aha! Maybe this is a reference to the title – all the world’s a stage? and Krutiov is a master playwright?/puppet master!]
Valentine: I don’t understand . He’s a second rate washed up playwright. What do you want with him?
Krutiov (lightly): Do you know about cats, and curiosity Mr. Valentine????

[This Krutiov is quite droll. He looks intense and dangerous, but he sounds light and airy.. ]
…Hmmm? Well tomorrow we’ll administer the coup de grace to Mr. Martinet. Oh, Mr. Valentine, make sure you wear a blue suit.

[I’m getting the vibe these two do not have a long history. Valentine gets the message. don’t ask questions, and do what you are told. ‘You walk with your hand in your left pocket! I know about you!!! Muahahahahaa!!’]

Krutiov isn’t waiting around to check if Valentine is happy to do that. He gives his orders and leaves.

[Poor Tony.. and poor Maria! We know the Russians want to be rrrrrruthless and grab her, but Krutiov is trying a different technique here first- involving Tony somehow. Maybe the Tony/Maria relationship is legit! ]

Back to the theatre and Tony is addressing all the cast as they leave: Tony: Tomorrow rehearsal at 10 sharp everybody. OK? 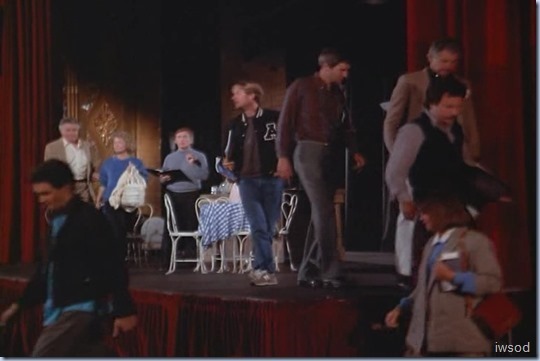 (they mumble vague acknowledgements.. )
To Amanda: We may not even need you but if we do you’d be wonderful. 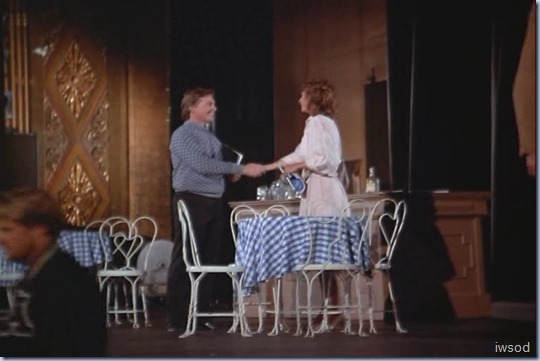 Martinet leaves, and Amanda is seen putting a script into her purse – whooo well done Amanda. she got a complete copy!

Amanda hangs around the stage for a moment stalling and trying to look casual..

..maybe she is also relishing being up on the stage again after all these years? Toying with the idea of taking on this understudy role? [The music suggests she is IMHO]

She sneaks out to the back of the stage and hears a clang.

She hides down low on the staircase and watches.
A man in a suit enters with a load of boxes. Not dressed like a delivery man but delivering something! Suspicious? You think?

He is seen unlocking a cage. 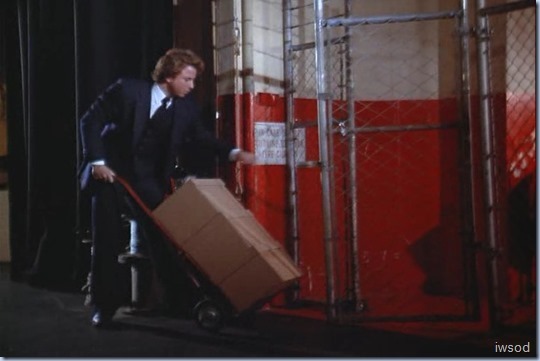 he puts the boxes in the cage, 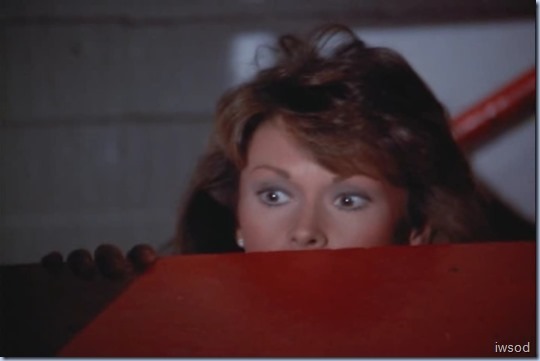 He locks the cage again and leaves. All observed by Amanda.

Amanda sneaks over to the cage and tests it, yep it’s locked.
Good job she’s had that training!! 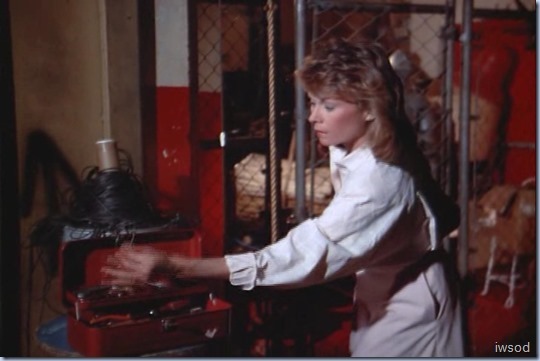 She grabs something handy out of the conveniently located tool box and sets to work unpicking the lock.
Clunk!

Success!!  [Love this shot of Amanda!] 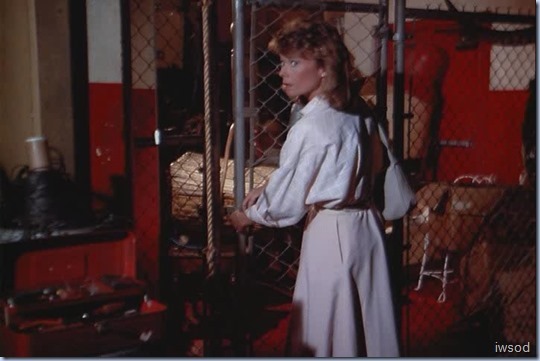 She enters the cage, opens a box and takes out one of the books. It seems to have a red cover.

she tucks it under her arm, and closes the cage door. 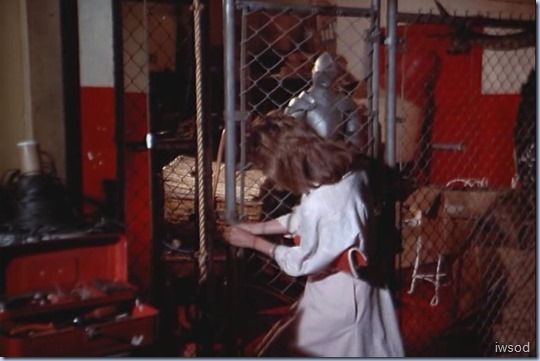 She’s putting the lock back on when Lee sneaks in quietly and observes her.

He’s a bit surprised by what he sees I think. [Hey, get use to seeing Amanda pick locks 🙂 ]

The look on her face is priceless!

Lee approaches.
…How’d you do with Martinet?
Amanda : Oh I did very well; he made me the understudy for the female lead. 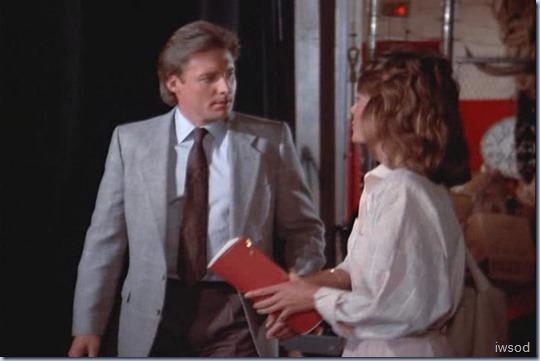 [I just love how they have these conversations still in the theatre. too risky! They should play the cover till they are out of there!!! no?]
Lee:  Understudy! Great! 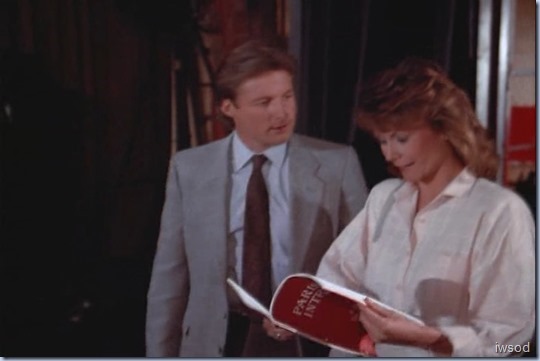 [I like that Lee acknowledges the good work but isn’t too gushing.]
..Is this the script? 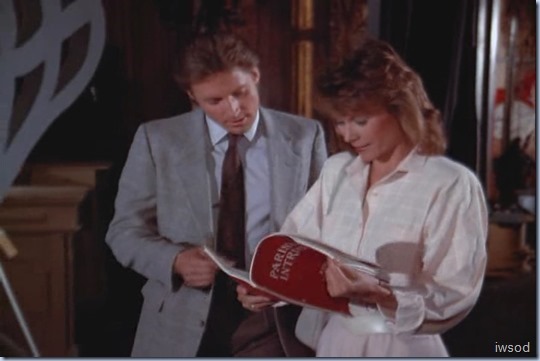 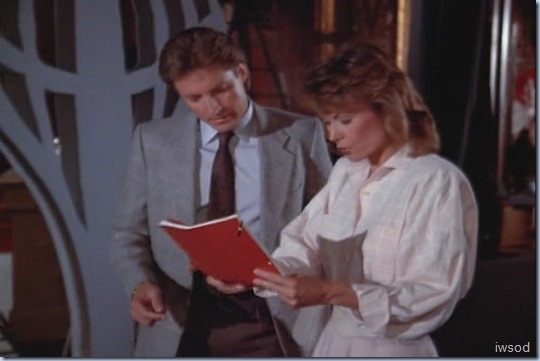 …How’d you do with Valentine?
[Um can we have this conversation outside?! I’m probably worrying about nothing..]
Lee: Meh, the standard stuff about production values.
(As they walk Amanda flicks through the revised script)
Amanda:Well you know this is actually kinda funny.

Lee: What?
Amanda: Well there are an awful lot of changes in here, but Tony didn’t say anything about a rewrite. 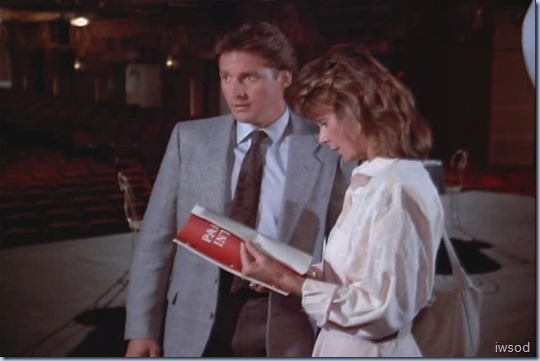 Lee: Well, let’s look at it from the beginning.
(Lee takes the script)

…Lets see,
[they both see it at the same time] 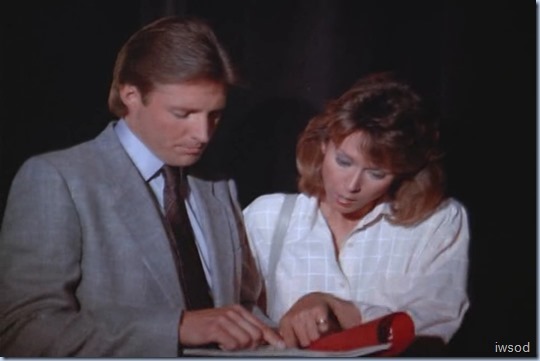 …right here on page one. “Crystal dewdrops of dashed dreams”… 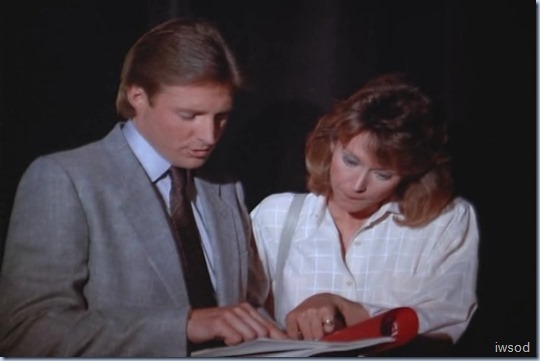 Finally, they leave the theatre!

Ugh!!!!! Just when I think they’ve been dumb but gotten away with it, Mr delivery man steps out from the curtains.

Uh oh… I can only guess he heard everything and is off to updated krusty Krutiov!

My goodness.. it’s all so absurd! and I’m intrigued!
Clever Krutiov is changing the dialogue in the play, and this is going to somehow get him Maria Van Clausen, Martinet’s girlfriend?! How does all this fit together? and.. how are Lee and Amanda going to figure it out?  I really do not remember how this plays out at all!!!! Don’t tell me!!! Anyone else not remember?