Everyone ready for Stemwinder Part 2? The episode opens with a recap of Part 1.. I’m not going to include that in the walk.. we really don’t need it. And….. I just want to find out what happens next!!

tee hee.. I will just share that it’s hilarious how the edit of the recap has Billy telling Dr Smyth Lee is lying, and it cuts immediately to Lee telling Amanda that he loves her haaaaaa!!!

Go see for yourself! 🙂

Thanks again to KC for transcribing the dialogue of this episode and sharing it with smk fandom – KC we salute you!!!!! [Thanks also Learjet for formatting the dialogue and saving iwsod loads of time!]

On with the show…
So the episode opens with Lee throwing logs into a drum fire. 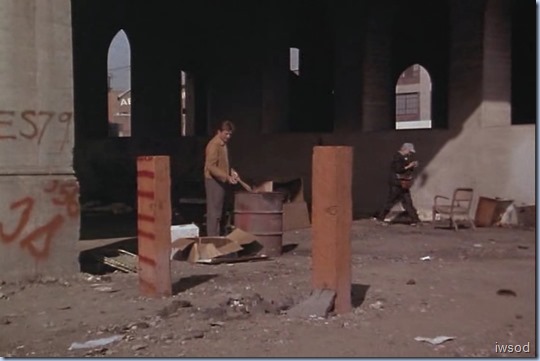 As the title is displayed,

a cardboard box pops open – Amanda’s inside!
Ta da! She crawls out.
[Was there room for two in that box?!]
Lee stokes the fire, and Amanda gets up to join him.

(Amanda seems to be trying to warm up her hands.
Guess it was a cold night. They join each other for a warming embrace.)

Amanda: I guess so.
[how can Lee’s clothes look so perfect?! those pants have no wrinkles?!!! and he has been roughing it in those clothes for the last two nights!!!! He’s amazing!

Amanda’s in jeans so that makes more sense – she hasn’t changed for a few days either-or am I mistaken?]
Lee: Yeah.

Amanda: I’ve never been a fugitive before.
(they draw even closer to each other in their embrace)

Lee: I know…
[Lee’s very gentle with Amanda. and lol – Lee’s probably been a fugitive loads of times!

…You ran the avoidance patterns as well as anyone I’ve seen. You know that? 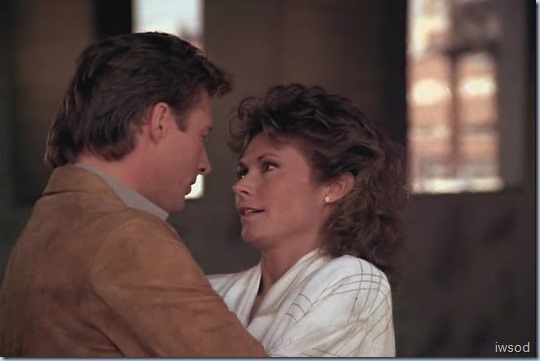 [A compliment?! I’ll never tire of hearing this!]
Amanda: Well, it was my neighbourhood…

…I know where the loose fences and the mean dogs are…

[Glad you agreed to Amanda going on the run with you now Lee?!
But.. how did they fall off the trellis and not get hurt? Amanda must have known where the soft dirt is, it’s her yard

tee hee..
Love the cuddles and the stroking. Very sweet! After Unfinished business – I really like the vibe between these two when UB is first!! ]
…They think we’re traitors.

Lee: That’s exactly what Alexi wants. He’s constructed this frame like a Swiss clockmaker building a masterpiece. But we’re gonna beat him, I swear it. 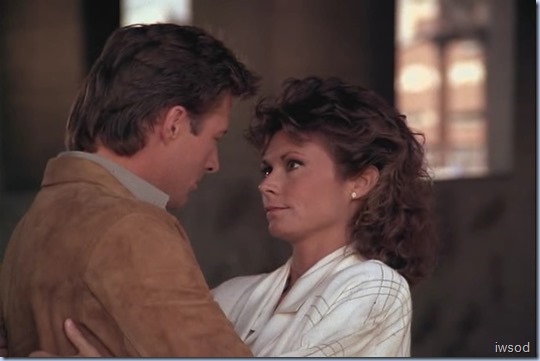 Amanda: It’s not just Alexi; it’s the Agency, they’re all over the place.

[Amanda’s certainly seen the agency for what it is now! this is the part that seems to upset Amanda the most.. A cunning baddie she can grasp, a cunning baddie agency is a whole new concept.
BTW- dirt on Amanda’s sleeve?! but Lee.. nothing 😉 tee heee..
It’s mad.. but they both look really good here!]

(Lee looks around to check the surroundings.)
[After all, the agency is all over the place

]
Lee: Yeah, well, I’ve got a couple of rocks they won’t be able to turn over…

…While you were asleep I… got a call through to one of my family. My civilian eyes and ears?
[‘family’ how interesting! Any pretence of the agency being family seems to have faded 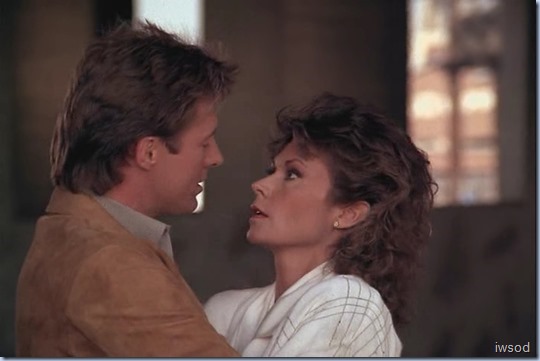 [I could share photos of these two cuddling for a whole post – just that! nothing else! It’s wonderful to see them together like this!]
Lee: The Agency doesn’t have a complete list of them. 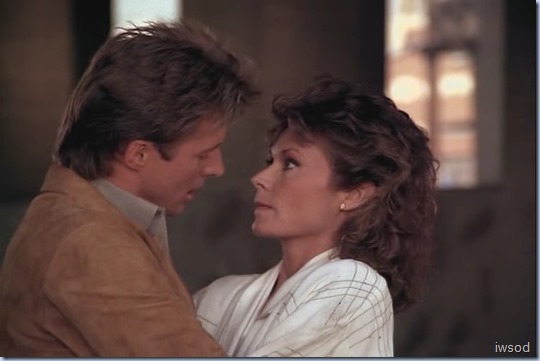 …I always keep a cache hidden away just for emergencies.

Way too good to rob a safe and leave his fingerprints – which is so amateur it’s ridiculous the agency could believe it of one of their best agents!]

A van pulls up to disturb the lovely romantic moment.

Amanda reacts to the van’s arrival, and so he notices it too. 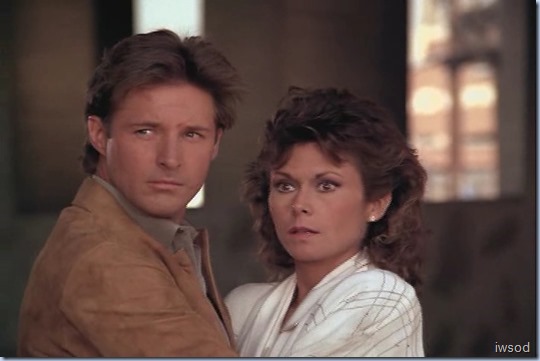 The driver motions.. and holds out what looks like a bag of food..
Lee : You stay right here.
(Lee seems to be expecting this visitor)
Amanda: Yeah.

(Lee heads toward the van, looking around for danger as he does so) [Interesting that 4 minutes into this episode we are still seeing the credits! I guess they were kind enough not to show the credits when they were cuddling and lookin good?!]
Van driver: We’d better make this meet a touch-and-go.

Lee: Problems?
Van driver: Not sure.
Van driver : I spotted a couple of UFOs; maybe it’s nothing but-
Lee: You shouldn’t have taken the risk.
Van driver: I couldn’t leave you hanging, man; you’re gonna need this.
[The driver hands the bags over to Lee.
What a contrast between Lee’s ‘family’ and the agency. His ‘family’ goes out on a limb to look after him! Even when Lee tells them not to!  ‘Leave me’ he says

Van driver: Now, there’s ten grand under the chow mein, and two pieces under the Peking duck. Good luck.
[Mmmm num num.. that must be the best tasting chow mein and peking duck ever!]
Lee: Right.

We’re going to pause here guys.. before the next series of events..

What were you all thinking at this point when your first saw this? And.. what are you thinking now?

Looking forward to hearing your thoughts!