10/15 Season Four Episode Four: No Thanks for the Memory

Back at IFF, we see a daytime exterior shot.. and I guess the next day? I’m not sure.. may be the same shirt – I guess it was an all-nighter!
Lee: Danley, try be an independent thinker for once …Let us have him for another 24 hours will ya? [Oh dear, there goes Lee again with his wildly successful technique of insulting someone he wants to get a favour from! aie!!]

…The guy is a gold mine, a regular gusher…
[rofl. a gushing gold mine. That sounds painful. rofl!]
…I know I’m mixing my metaphors and you are making me crazy. [rofl! Danley noticed it too haaaa I love it! Oh that is hilarious!! ] 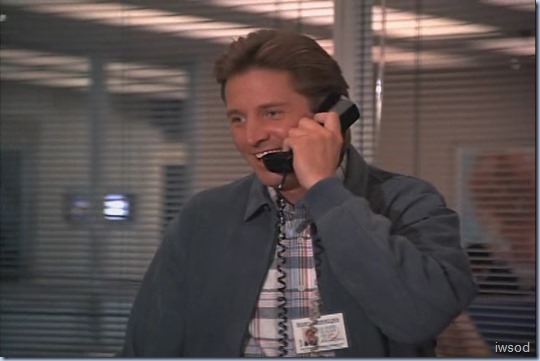 … Okay now I promise you, he’ll be on the plane. Okay, great, thanks. [Hmm seems Lee’s light-hearted, self depreciation has done the trick! hoorah! Love how he ended with a ‘don’t push it’ tone

]
(Amanda and Francine join Lee and whooo some other agents in the conference room. Seems a whole team of agents are working on Amanda’s case now.. Beaman must be tickled pink!)
Francine: I think we might have found something.
Lee: What? 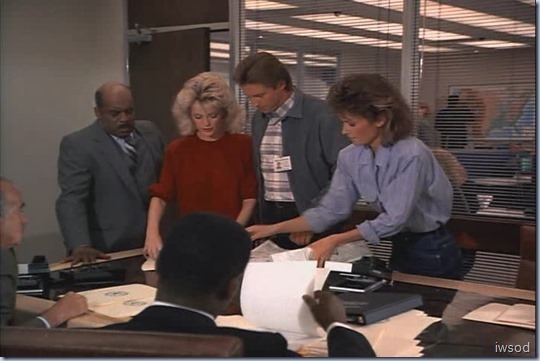 [I propose an smk drinking game.. one shot every time someone uses ‘potpourri’ in a sentence!!! It’s that or I stab myself in the eye every time I hear potpourri! I think this game could improve this episode 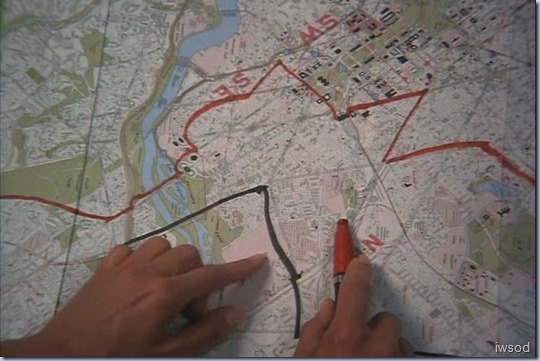 Amanda: Look there’s seven trucks and six routes to the incinerator but only one matches up with the time indicated in Zhmed’s note. [What luck! Only one matches the time, and the code telling the time survived the attempted incineration!]
Lee: So what’s this batch? Gall bladder status of the Joint Chiefs of Staff? [Whahahhaaaa!!! I love lines like this – it’s like smk is not taking itself too seriously and knows how silly this is haaaa]

Billy: Preliminary physical data on Air Force crews. I don’t know why he wants it. But the minute Tolst makes his move, we move in. [When Tolst moves he’s toast.. ahem..] 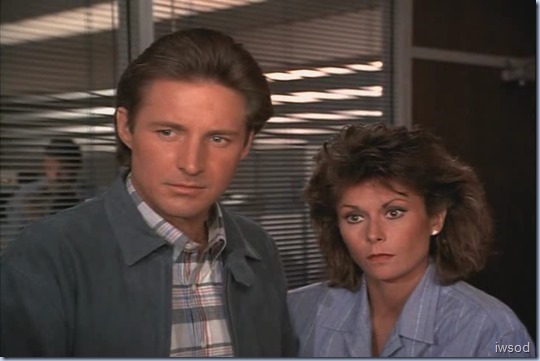 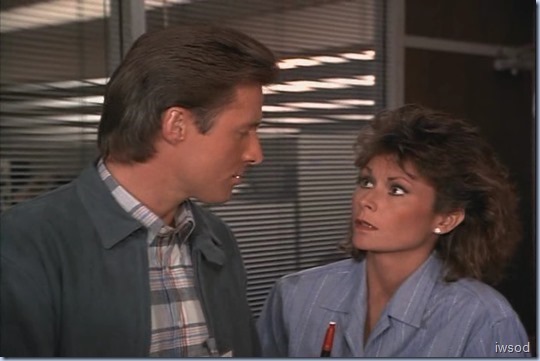 he’s so sensitive when it comes to Amanda.. warm fuzzies! ]
…Even Tolst can’t make him disappear before our eyes.

We cut to a wider shot.. the random agents are watching on.. and doing nothing. rofl.
The scene ends here..

I’m only half kind paying attention to this ep.. waiting and hoping something sucks me back into this plot.
I could be mistaken here but I could swear yesterday Tolst told Zhmed that he would be memorising the files.. and then here, the next day – Francine and the gang seem to identify the transport of air force files tomorrow – me thinks this is a boo boo and the scene in the conference room was supposed to be at night and they used the wrong exterior shot. Lee had said it would be an all-nighter.. and Lee and Amanda are wearing yesterday’s clothes. Oh smk, why did you not hire a little work experience kiddy to keep track of the timing of the ep during editing?!

Same day, we are back at that dangerous country road – the same corner Zhmed drove around twice haaaaa..

Billy and Amanda watch on.. and they see a military truck drive by..

Billy talks on the walkie-talkie.
[Interesting that Billy and Amanda have partnered up.. where’s Lee?]
Billy: What do you have?
Francine: For the last two miles the Army vehicle has been followed by a tow truck.

Billy: Alright, drop off. We’ll pick it up from here. We’ll stay about a quarter of a mile behind them. …There it is.

Amanda and Billy get in the car to follow the tow truck. It’s action sequence time!
I’ll go with Janet’s description here (thanks Janet!):

Cut to view of Army truck from hillside. 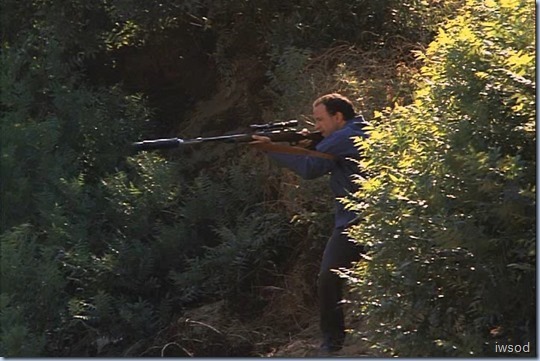 Sasha [The sexy vest baddie] takes aim with rifle as it passes and fires. Front tire blows and truck stops. Two army soldiers exit truck and examine damage as tow truck pulls up behind them Tolst exits tow truck and approaches them.

Tolst : Looks like you have a problem.
Soldier: It’s the front tire. The lugs are damn near welded to the wheel.
Tolst:Well, I’m sure I can get it off with my pneumatic wrench.

Janet’s description continues:
As Tolst walks back to his truck, he passes passenger door and swings it open. Shot cuts below truck where we see Zhmed slide slowly out of truck and crawl towards Army vehicle, then climb in back.

He pulls out flashlight and begins to rummage through boxes marked “Property of US Air Force”. Muffled conversation can be heard outside the truck.

As he opens a box and pulls out file, Lee steps out from behind stack and slips a hand over his shoulder. 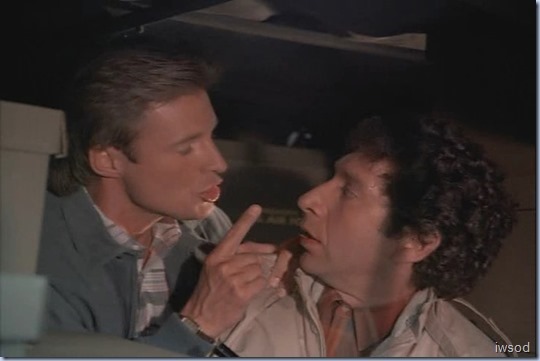 [I think Zhmed just wee’d himself!
Aha! So that’s where Lee is. that’s cool

]
Lee: Shh shh shh, quiet. Which files are you supposed to read?

Zhmed: The files marked “Rainbow Family”. Now leave me alone.
Zhmed starts reading a file, Lee tries to snatch it back by Zhmed is focused and snatches the file back to read it. LOL Umm Zhmed has what 3 seconds to memorise a certain number of pages doesn’t he?

Lee: Now listen. You, me and those files are getting out of here. Now Tolst will be picked up the moment you’re safe. Zhmed: I will only be safe if you leave. I just have to do what I am supposed to do.

[Finally, Zhmed shows Lee his one of a kind fashion accessory: A bomb!]
Zhmed  I’m hooked up. I’m hooked up to an explosive.
[umm you could have mentioned that before you told Lee to leave you alone. rofl.] 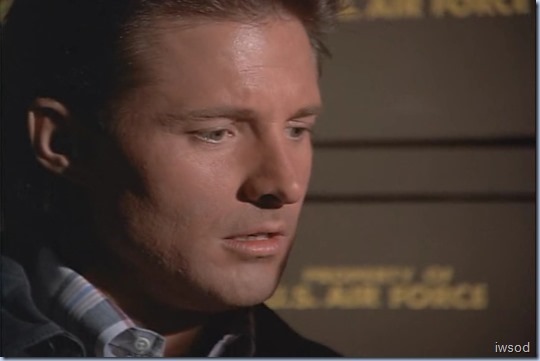 uh oh… cue a concerned intense look from Lee to finish off this scene and cut to a commercial break….
Poor Zhmed he is frantically trying to memorise all those pages – he is on the clock, and won’t Tolst know he spent half the time not even looking at them when it was all so time sensitive? I wonder if Zhmed would happen to mention to Lee the guy outside is Tolst – you know the guy you didn’t know what he looked like and he is super evil?! Maybe Zhmed won’t want to tempt Lee to nab Tolst there and then because Zhmed just wants to co-operate thanks to the bomb..

Time for us to pause! Thoughts anyone? Can’t wait to hear from ya! I hope you are all well – and sorry I’m not able to be here much at the moment.. I get in my little smk time as much as I can !

12 responses to “10/15 Season Four Episode Four: No Thanks for the Memory”