Let’s do this!!!! The episode opens with an image of the White House, and some shots of Washington DC streets. 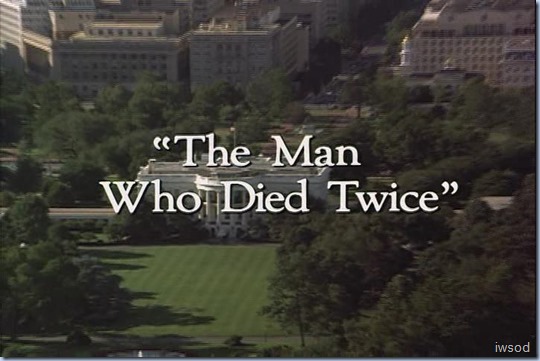 We head straight to Billy’s office and it’s time for visual aids. Billy is presenting information to a small group of agents.. 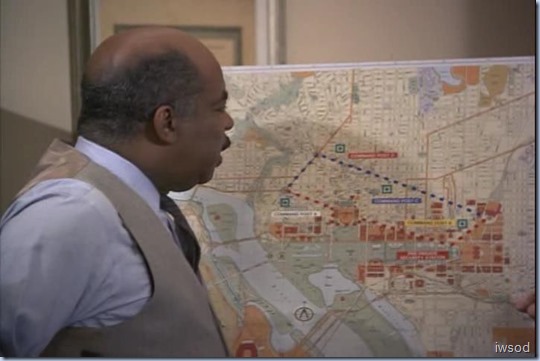 Billy: The Chinese Trade Fair is a week-long event… eighteen running miles of parades and exhibits…

(Lee, Francine and two randoms are present. Lee’s in the office half listening and reading the paper.)

Billy: …Their General Secretary, Hu Yaobang, kicks it off at noon, Friday… 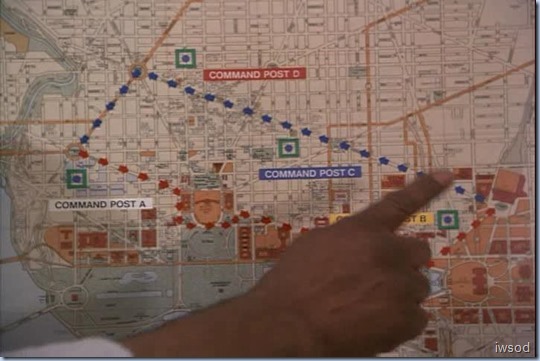 …Fifteen receptions, two concerts, about a hundred possibilities for any anti-China group… doesn’t make any difference which hand they salute with, right or left. It’s still a security nightmare.
[You all paying attention? There will be a test on this later! rofl. Such detail!]
Francine: Several nightmares.
[are we playing smk bingo? I think we can tick off ‘Francine inserts a quick quip into some boring info’ for this episode]

Billy: The Secret Service and the DC Police will handle the main show… we will back them up with intelligence…. 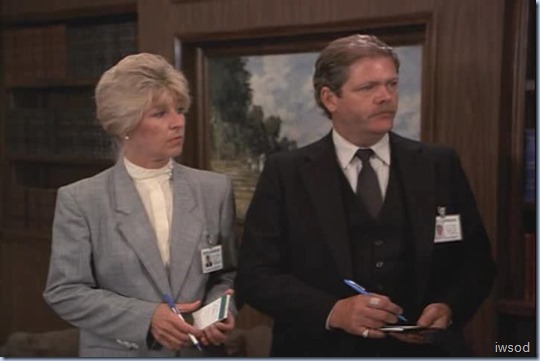 …Any half-truth or piece of lint that you pick up, I want it now. Let’s do it.
[whooooo Lint alert!]
[These two totally need names – anyone want to go for it?! have we seen these two before? In days of old, I would have gone hunting to find a collection of sightings. Sorry everyone, those times are not now- it’s a time for curiosity thrown out there and if someone wants to take it and run with it: Awesome!! and if not.. well.. it will still be a question to be explored then next time we walk through this ep together

(Francine and the two randoms get to work. Lee and his newspaper stay put.)
Billy:  House shopping? 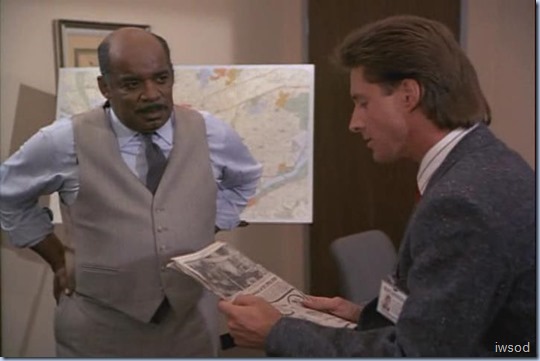 Lee: Ahhh, just studying architecture… pre-Revolution, anti-bellum… You know they date everything around here from some war.
[Is this ‘some war’ line a gag that I probably don’t get? I’m guessing it’s probably obvious, and thus funny for Lee not to say]
Billy: Go to the senior staff meeting, you’ll find out why. Dr. Smyth is beating me up for proof on your ‘Vietnamese plot.’

[Ahh those pesky higher ups want… actual proof! Lee’s word and sources are gold! they should be enough! lol. I am a little afraid. I find myself agreeing with Dr Smyth here!]
Lee: Well, it’s real. The Vietnamese are going to hit the Trade Fair. Khai has all the details.
Billy: Well, get them… The Old Man likes to have a nice thick packet under his arm when he goes to the White House.

Lee: Why the hell are we being so careful with these Vietnamese, huh?…

…I think the President oughta take Mr. Diem and his whole delegation and ship ‘em right back to Hanoi, now!

(calms himself) But then again, I only work around here.

Billy: (deadpan) Did they put too many zeros in that price?
Lee: What?

(Lee takes another look at the price..

and then scowls at Billy, realising Billy was teasing!!) 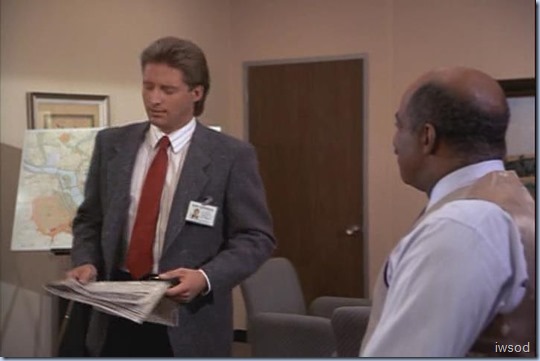 The scene ends with a fabulous Billy Belly laugh as Lee leaves his office.. Ahhh Billy’s work here is done

Moving on to the next scene..

Lee: (V.O. ) Bethesda is just getting too congested. And, y’know, Annapolis is great for a weekend, but you can forget about that 301 coming in. 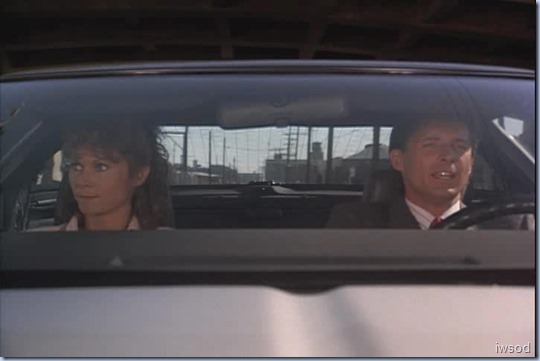 (Amanda sighs very loudly!!! )
Lee: You like up toward Rockville?
Amanda: Oh yeah, I love it up there, but it’s pretty expensive.

Lee: Well, we don’t have to live in a palace, you know… the point is, I think it’d be great for the boys.

Amanda: Yeah… uh, you know we have an awful lot to think about before we start talking about mortgages.

Lee: I know, I know… I’m just getting excited about the possibilities.

Amanda: I know you are.
Lee: Up in Rockville we can keep horses.
Amanda: Do you have any idea how much it costs to keep horses???!!!

Lee: Yes… as a matter of fact, I do. I had a little roan mare when I was ten years old and my uncle was stationed near Cherbourg. I sure loved that horse. She taught me a lot about responsibilities. I think horses and kids are a natural…

…I always planned, that when I settled down my kids would have horses. 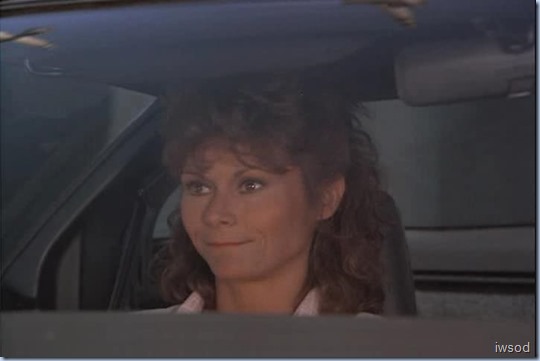 She doesn’t look terribly thrilled with this plan] 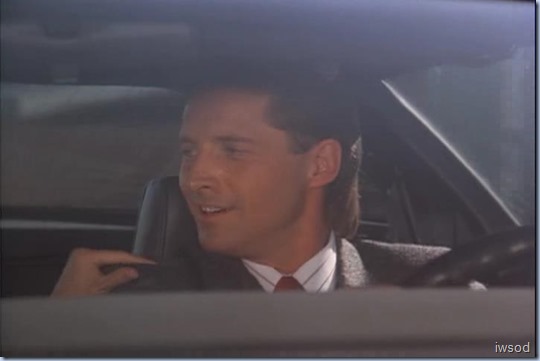 Lee: Well…
(Lee smiles! lol Amanda’s reassurance seems to do the trick)
Amanda: I just think we have an awful lot to talk about before we… start thinking about things like this, that’s all.

Lee:  Okay, keep my feet on the ground.

(We see the corvette pull up at their destination)

(V.O)…But for now, watch my rear, huh?
Amanda: My pleasure. [wha??!!!! whoooo frisky Amanda!!] Lee : Very funny.
[LOL Lee seems unimpressed with this joke haaa. Interesting that we don’t see a close up on them for these last couple of lines here. I think it needed the lightness here – and it worked great.

So before I move on to what happens next, I’m really curious to hear what you all make of this exchange in the car.
I have mixed feelings about it.
On the one hand, it makes sense that Amanda would be cautious, and maybe more down to earth in options put forward for their future  – and Lee is a little more head in the clouds. I think this is what I’m supposed to see here..
I mean, I know Amanda loves Lee and is committed to him.

However, the tone feels off to me. Like, he’s more into her than she’s into him. I fully expect others to respectfully disagree with me.. Feel free to. Previously I’ve seen this whole side plot really differently to how I do now!
I think Amanda comes across as closed off here while Lee is wearing his heart on his sleeve.
Amanda seems to be holding back, and her reactions to what he says come across as a bit condescending:  The little shoulder touch and ‘I like all your ideas’??? Seems…. disingenuous to me. Not that Amanda needs to be perfect, she doesn’t.. Just my 2 cents, but the vibe here feels off. Maybe it’s a sign that this episode is going to shake things up..
The little sassy joke inserted at the end here is a welcome addition..
What do you all think about this scene? Do tell! It’s tricky to discuss without jumping ahead, I hear ya, but let’s give it a try?! ]
Okay, moving on..

[Ah Nancy! cross necklace alert!]
But Lee is initially unconcerned that he would shoot them, more that Mr Diem might be around)
Lee: Diem? Where? Come on, what’s going on? Put the gun away.
Khai shouts: Mr. Diem wants to ‘call the question.’
{Khai’s words galvanize Lee into motion. He spins toward the Corvette}
Lee: (shouting) Amanda, get down!”

{Khai fires his gun at them. Lee leaps over the Corvette hood and takes cover himself behind it. Khai fires again and Lee emerges and fires back. Khai shouts something in Vietnamese, then gets in his car and drives away as Lee continues to fire at him. Khai’s car goes under the freeway, disappears around the corner, tires screeching

a beat later, we see a massive explosion.

Lee and Amanda run toward it.
(I see Amanda is back to wearing heels and running!)

They arrive to find Khai’s car has crashed into the side of an oil tanker truck and is engulfed in flames.

Amanda grips Lee’s arm and looks away in horror. Lee rests his hand in top of hers but continues to stare at the conflagration.}

The scene ends there..
[Soooo what got up Khai’s nose?! Lee having a partner? lol.
The err title of this episode is called ‘The man who died twice’ so err I wonder if Khai is really dead. ahem. because it all looks like a set up and like it came out of nowhere!
Now, did I think this the first time I saw it? Hmmm.. probably not!]

Moving on, and we head back to Billy’s office.. 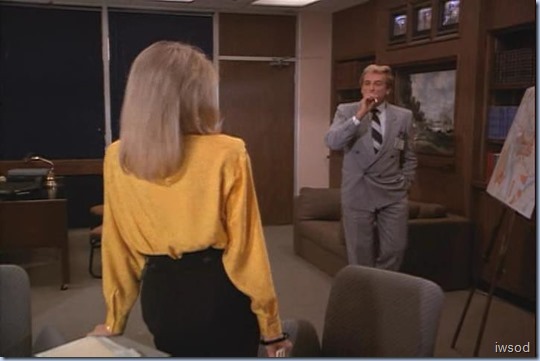 Francine: Are you, uh, looking for Billy?

Smyth: Uh… and apparently what you don’t want me to see.
{As she speaks, she moves to block the screen as Smyth tries to see past her.}
[rofl. could this look any more suspicious??!! ]
{We can see only part of screen} [Call me crazy but is this the screen we were looking at for aerostatik projects in the last episode?!

It is!!! Here’s the screen from the previous episode.

Haaaa Francine, come on- move on! That case is over!! haaaa!]
Francine: Oh, this Sir?
She holds out a file.
Smyth: I haven’t got time for a Maypole dance this morning, Desmond. Digame, digame
(Clagjanet adds: Spanish for “tell me, tell me”)
[Thanks Clagjanet!!]
Francine: It’s Scarecrow’s preliminary, Sir. I was just, uh, cross indexing it for possible peripherals.
{She quickly turns off the computer and walks away.}
Smyth: Spare me. You people down here sound like robots.

Francine: It’s only that you usually receive the report digest, Sir. That’s the full report.
Smyth: I know we don’t play patty-cakes around here but this man Tranh Van Khai is a very special little birdie. I’m surprised Scarecrow made it so irrevocable.

[This dialogue is flippin hilarious!!! He’s scarecrow, of course he was hard on the special little birdie! That’s a scarecrow’s job!]
Francine: He was being shot at, Sir. 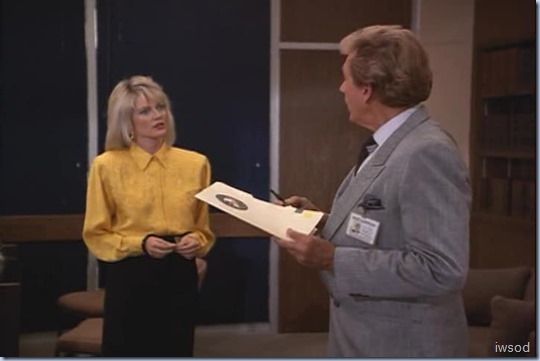 Francine: Yes Sir, I believe it was! Lee Stetson is very cool under fire and he is the first one to avoid shooting someone – especially a friend! This is really tearing him apart!

[Whooo so emotional from Francine here!
I’m quick to say fashion police alert- so I should probably be just as quick to say: this ensemble’ ain’t bad!! and I’m loving her hair here. Aside from the footballer sized shoulder pads, this is a good look on Francine!
I have this underlying sense of discomfort right throughout this scene – Smyth is awesome in his incisive and brutal approach, but also – Francine chooses this time to let her mask slip???!!! I keep thinking nooo Francine don’t show any vulnerability to this guy!]

Smyth: Doesn’t suit you. Back to your peripherals, Desmond. [Sincere doesn’t suit him either! I’m so unsettled.. again I find myself agreeing with Dr Smyth haaa!]
{He turns to walk back to the door. Francine sits back down in front of the computer. Smyth turns back. }
Smyth: I think he asked you not to let me see that, didn’t he?
Francine has her back to him so he can’t see her roll her eyes.
Francine (through gritted teeth): Yes, but I don’t think there was anything devious about it. 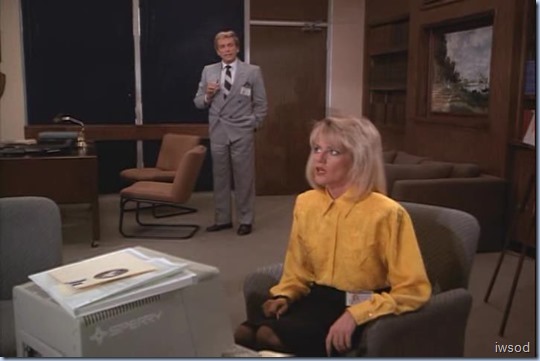 {She turns to glare at him}
Smyth: (smiling) Why not? I like that in a man.
[Oh really? But.. what does he make of a devious woman?!]
(Dr Smyth leaves and Francine sighs.) 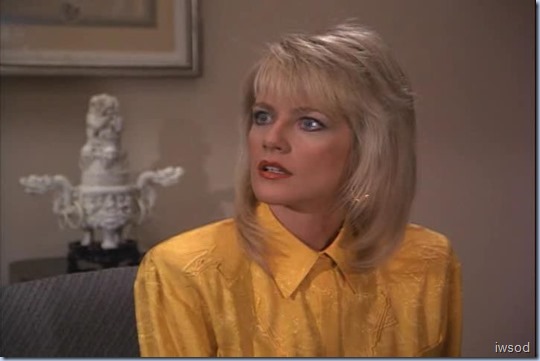 The scene ends here.
[Francine certainly seems to have Lee’s back. And… is actually not pretending otherwise anymore ha!
Dr Smyth likes deviousness? Yeah sure you like that… that’s why you sent people after Lee to kill him in stemwinder because you couldn’t trust him. I never tire of Dr Smyth, his ‘deviousness’ and fabulous turn of phrase! Thus, I kept it all in here – enjoy peeps!]

Lots to talk about here!!! I may not have time to reply to comments, but I always read them and enjoy them!! Soooo any thoughts you’d like to share all?? Do tell!!!