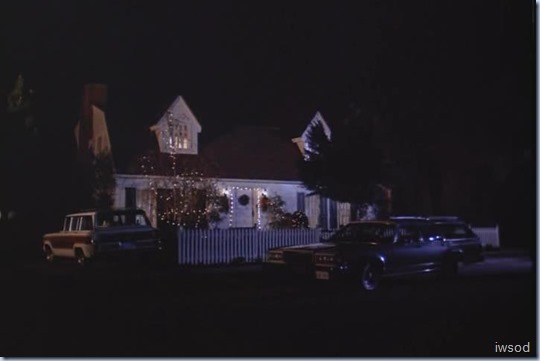 We can see that the exterior of the house has been decorated with lights and a wreath and there is station wagon parked outside as well as Amanda’s Jeep. We can hear electronic Christmas music playing.

Cut to the family room, also decorated for Christmas. Joe is playing with a portable keyboard synthesizer set up on the coffee table.}

[Hey does this mean that station wagon out the front is what Joe drives? why does that make me chuckle?!
Umm this playing kinda goes on a bit long.. I think it was in Sam Melville’s contract that he gets to play a Christmas tune with one finger for a minute! maybe it’s just me!]
{Amanda enters, dropping her coat on the back of the couch.}
Amanda: Oh, that’s fantastic.
Joe: (chuckling) One finger. It’s incredible, isn’t it? |[Oh. It is.] … Hope you like it.

Amanda: Thank you Sweetheart.
[Hang on a minute. I just want to go back and watch Amanda give Dr Smyth a kiss on the cheek. That was way more enjoyable to watch and listen to that this!!!! GAH!!!!!! He doesn’t get to be called Sweetheart anymore! lol. I mean sure it’s great they still get along. And I remember there are some fans of smk who don’t mind this one bit. It’s healthy and friendly and all that – but they’re no longer married!!!! this sends me right back to that kiss on the lips goodbye on her doorstep that Lee got all jealous about! What episode was that? Oh yeah. Stemwinder II. Where we got that wonderful line from Amanda: I love him, I’m always gonna love him. But I’m in love with you. [See HERE]
I think what cut Lee back then was how Lee and to sneak into the backyard to smooch Amanda, while Joe got to do it on the front porch.
Hmmm.. I wonder if they allude to this on purpose. Because Lee at this point is no longer sneaking into the backyard!!!!!! but.. he’s trying to sneak out of anything Christmasy sooooo what’s gonna happen for Lee and Amanda this Christmas? We’ll see!
But.. put me down for the – maintain boundaries with your ex- you are no longer together club!
I did create a meme about this which was quite cathartic for me. lol. II’ll share it in the christmas day memes post – but evidently I still carry some bitterness haaaa!]
Anyway, back to this ep!
Joe: I set it up early for the boys. Phillip’s already mastered the Marine Corps Hymn.

[Why does Joe have a wedding ring on? did he remarry?! if so.. hoorah.]
Amanda: It’s great to have you here for Christmas.
Joe: It’s good to be here.
[They move into a closer embrace. Oh please no. Gah! no kissing!

lol Dotty saves the day!]
{Dotty emerges from the kitchen, groaning in frustration.}
Amanda: What’s the matter Mother?
{Joe and Amanda exchange grins like they’ve seen this before.}
Dotty: (ranting) Would someone go upstairs and tell my sister that you do not cook a goose in tin foil. 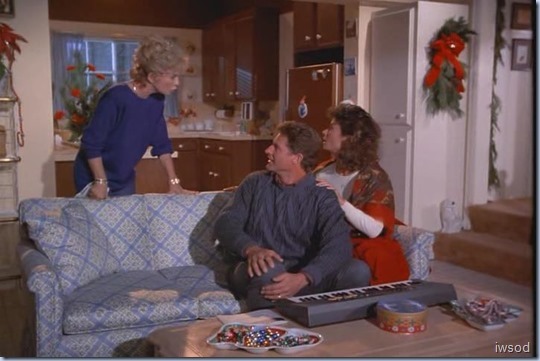 Amanda: Mother, are you two already at each other’s throats? She hasn’t even been here a whole day.

Joe: Why don’t we just relax play some Christmas carols and work on that big bowl of nog in the refrigerator.
[Oi. I wanted someone to tell Joe to stay out of it.]
Dotty: Lillian wanted to get into that before lunch.

Amanda: (laughs, quietly to Joe) it’s really beginning to sound a lot like Christmas.
{Joe nods, laughing along with her.}

Dotty: Why does she come here and think that she can (raises voice to a shout, aimed up the stairs) take over my kitchen!

[Interesting family dynamic going on here. Why is Amanda the one who has to step in a resolve things between Dotty and her sister. Amanda’s always the peacemaker. Meanwhile she’s all touchy with her ex. Ugh. tee hee..]
Dotty calms: I hope so..

{Jamie and Phillip burst in the room. Jamie is wearing tinsel on his head like a punk rocker. Phillip is chasing him with a can of spray snow.}
Amanda: Hey, hey, hey! What’s going on here? Fellas, no running in the house. Fellas, stop!
{The boys come to a dead stop in front of the adults.}
Amanda: Now what’s going on?
Jamie: Uh, well, Phillip was trying to put that white junk in my hair.

Phillip: Oh and Aunt Lillian’s up in our room crying.
Amanda: Mother, 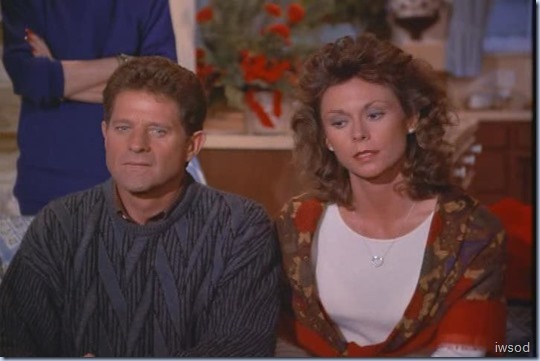 (we see Dotty is unrepentant) 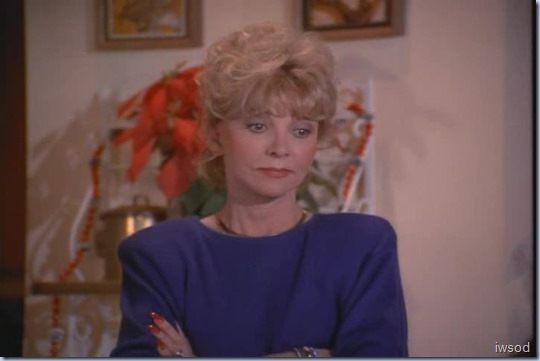 ….what did you say to Aunt Lillian?
Dotty: Nothing. Nothing. We were just discussing the menu for tomorrow night.
{Amanda sighs and gives her mother a look while Joe laughs. Dotty pauses and glances up at the ceiling.}

{Joe can’t contain his amusement while Amanda looks horrified.}
[I confess I’m happy to see this! haaa but then I’m petty! haaaaa!]
Joe: Boys, come on over here…
[Go Dotty and Lillian. Sounds like they made a goose of themselves over the goose.
Right about now, I’m starting to wonder if Lee has the right idea about families and Christmas. Haaaaaa.. Just kidding. But.. this does make me wonder if this is why Amanda is an only child!]

The boys head over to their dad while Amanda sorts out Dotty and Lillian and the scene ends there.

{Cut to Agency at night. Lee’s car is parked outside. There is a single light on upstairs.
Off camera, we hear Leatherneck.}
Leatherneck: okay, here’s Walt’s guts.
{We cut to the Q Bureau where Lee and Leatherneck have a pile of toys on Lee’s desk and Leatherneck is doing something with a screw driver.}

Leatherneck: The hottest chip in this frog is the NAC735. It’s your basic ten-year-old Op Amp Oscillator.
Lee: What else you got?

{Lee tosses the Harry the thing up in the air but it doesn’t come back down. Lee and Leatherneck stare up at it.} 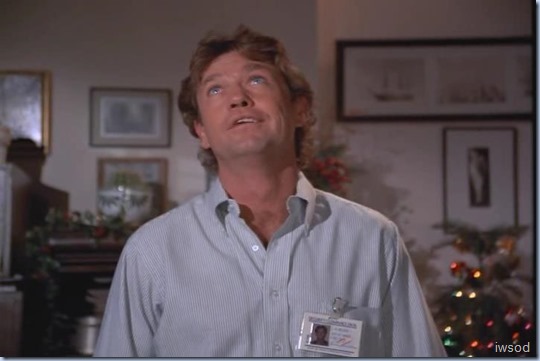 Lee: Yeah
Leatherneck: Yeah, what I got is the last of the Titan Christmas line.
{He picks up a silver cap gun and puts it in front of Lee on the desk.}
Leatherneck: Here’s a Tombstone fanner.
{Lee makes a happy noise as he picks up the gun.} 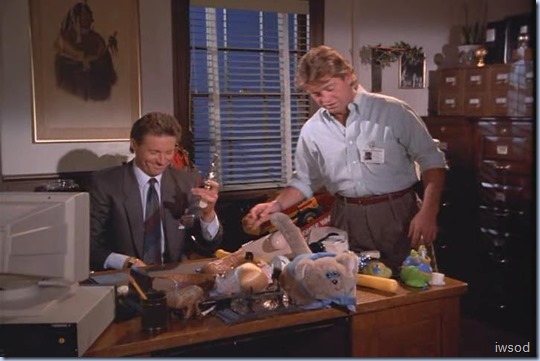 Leatherneck: And a Spud .45. I don’t know – the most sophisticated thing in either one of them is a spring.
{Lee is grinning at the cap gun.}

Lee: I had this exact same pistol when I was a kid…

(He aims it and fires off a few caps) 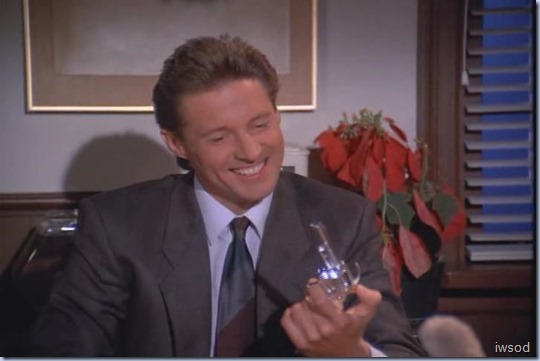 …Nothing like the smell of caps in the morning.

Leatherneck: Yeah right. Well, look, boss, they’re probably taking down the banquet tables right now so I gotta get down there and help ‘em out.

(Leatherneck makes for the door)
Lee: Okay thanks, Leatherneck… You know, the IRS audited Titan Toys a couple of months ago…

Leatherneck: Beats me. I’ll see ya.

(Leatherneck leaves)
[Leatherneck said he had to go, then Lee shares a random bit of info about the case like Leatherneck would have any idea? Why did Lee do that???  Beats me! haaaaaa. Pretty clunky. but Lee and the toy gun is so adorable I don’t mind a bit of clunky exposition. Okay okay. lots of money being spent on R& D and zero to show for it. Whatever could it mean?!
Lol Leatherneck is mostly out the door when we hear this voice over from Lee..]
Lee: I’ll take the toys back to Bernie.
[Lee! Leatherneck doesn’t care he’s outta there! lol.
Looks like they added it post production- weird.]
{Lee spins the pistol on his finger gunslinger style,

and fires off a cap in the direction of the ceiling. 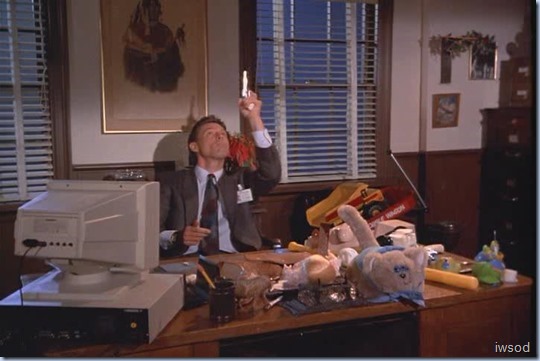 Harry the Thing falls back down on the desk.

Lee looks pleased with himself.}

[Oh my gosh! how cute is that.. Lee is letting his playful side come out while he’s all alone with the toy gun! haaaa wasn’t big on toys. Yeah Right.
How did he get the thing down?! did the gun actually shoot something? what do I care – this ending to the scene is adorable!]

{Cut to Bernie’s living room. Bernie is up on a small ladder decorating his tree. A man crosses in front of the camera and pauses in the shadows. 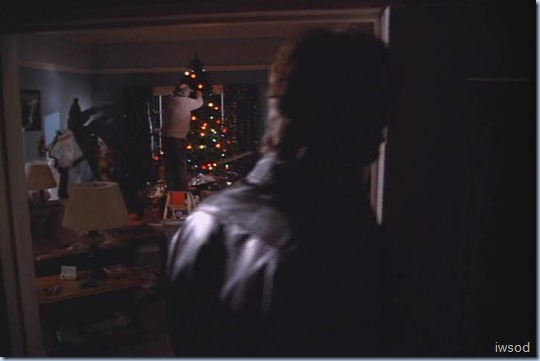 Bernie turns, looking like he heard something.}
Bernie: Is anybody there?

{We see that it is Ingle, who pulls some sort of gadget from his pocket and aims it at Bernie. It gives off a burst of red light and a loud beep. 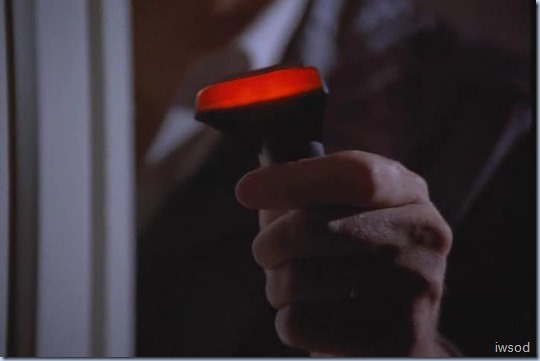 As he is blinded, Ingle runs forward and kicks the ladder, sending Bernie tumbling.

(Ingle cuts the Christmas tree wires and crosses the wires short circuiting them. He then sets a present under the tree alight with a lighter.)

[I guess he is trying to make it look like the Christmas lights were the source of the fire starting.)

{Cut to exterior. Ingle is walking out of Bernie’s house and getting in his car. As he does so, we see Lee’s car pull onto the street, then park in front of the house. As Ingle watches, Lee gets out of his car and realizes the place is on fire. Lee jumps out of the car and races up to the house. He stops to look in window, then tries the front door.}
Lee: Bernie? Bernie are you all right? Open the door!

{He attempts door again, then runs around side of house to the back, while Ingle watches.
Cut to interior of Bernie’s house. Smoke fills the room. Lee runs in from back.}

Lee: Bernie.
[I can’t watch this little action scene without laughing out loud! Maybe it’s not intentional?? but Lee calling out ‘Bernie!’ to someone who is in a house fire is flippin hilarious!!!!!!!!!!
Quick Lee! Bernie Burnie!]
{Lee walks over to burning Christmas presents then leans over Bernie who is out cold on the floor.} [and in danger of burnie!]

Lee: Bernie? (tries to shake him awake) Bernie!
{Lee moves to pick up Bernie. [before he can burnie!] Cut to exterior shot as Lee carries a coughing Bernie out over his shoulder and lays him on the lawn. 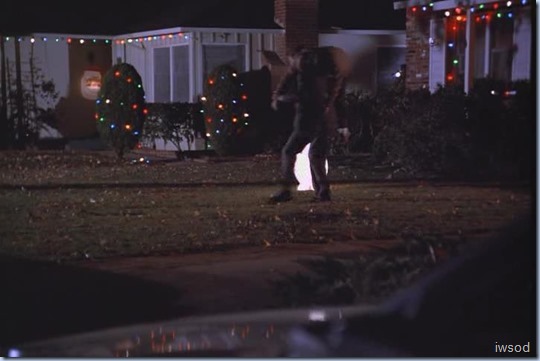 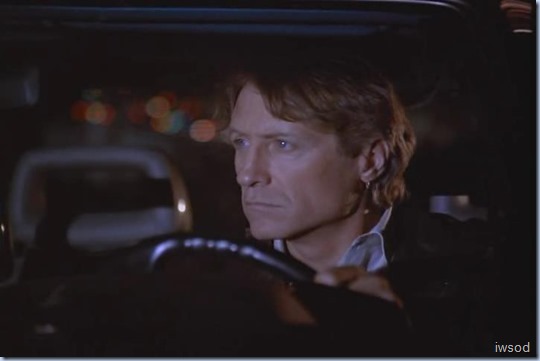 We hear sirens.
Lee runs back inside as Ingle drives off.}

[Lots of emphasis on the fact that Ingle is taking it all in. And you know what? I have nooooo idea why and what happens next! lol.] Thoughts everyone?