Back to Billy’s office.. time for Billy to have his stress attack over what Lee and Amanda have done here by going along and helping TP!
Billy: Then tell me why do I suddenly see my career flashing before my eyes?
[Haaaaaaa. Hey, in the pic below – whose shoulders are bigger? Lee’s or Amanda’s?!] 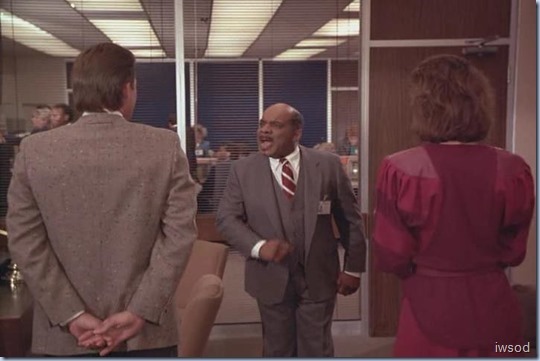 Lee: Look, TP said there was going to be a very important visitor at this meeting, Donald Jordan.
Billy: Jordan? He’s been out of our reach for the past five years!
Amanda: Sir, if we follow TP’s plan, we can put him in jail, once and for all. 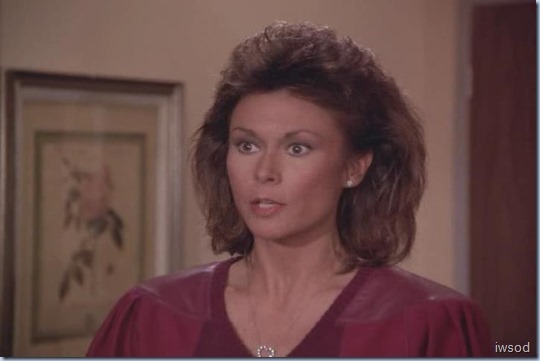 Lee: That’s right. And if we yank him off the street now, we’re going to blow the only chance that we’ve got. 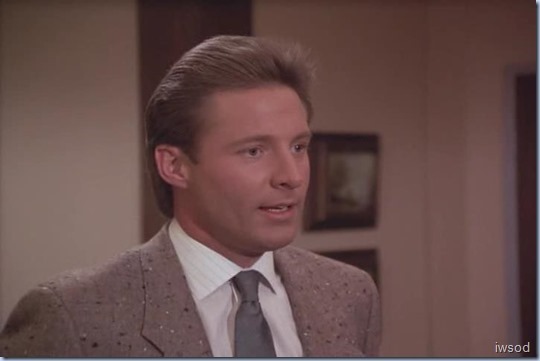 [Blow?? rofl. Lee you are closer to the truth than you realise here haaaaa!!]
Billy: Ok, I guess if TP can put his life on the line, I can cross Dr. Smyth one more time.

[oh rofl. That seems too easy! haaaaa]
(Billy outlines his plan – he’s going to order two TAC teams, air support and he wants Lee to take a gyrocopter. And he complains about it all along the way. LOL. Long suffering Billy!)
The scene ends there.

(Out in the agency hallway, Lee is heading for the elevators when Francine intercepts him.)
Francine: Hold it right there, Lee Stetson.
Lee: I’m in kind of a hurry, Francine ok?
Francine: Oh, this won’t take too long. Come here…
{She grabs him and steers him to a corner.}

…I have just one word to say to you. Stop it.
Lee: That’s two words. but why quibble.

[haaa poor Francine she’s so frazzled by all this she can’t even count to two haaaaa.. Aie. this is getting painful to watch!]
Francine: You know what I’m talking about. Amanda!
Lee: What?
Francine: (getting angrier as Lee laughs) She is just a housewife from Arlington!…

…She has never experienced your… your scorched earth policy of relationships!
[ohhhhh Lee starts chuckling at this one!!] 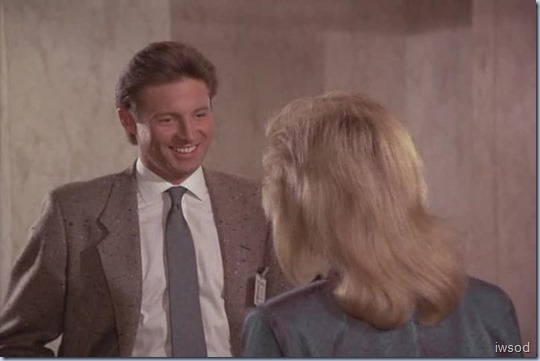 …Now, this…this…
Lee: (sarcastically) Affair?
[Lee is not taking her seriously- at all!]
Francine: (glaring) Casual flirtation to you…

…It could devastate her!
Lee: whoww.

[Lee is still not taking Francine seriously.]
Francine: I tried to tell her about it, but she… just… doesn’t……. know you like I do.

[Sooooo peeps, who’s buying this? Is this really all about her concern for Amanda being devastated? There’s a part of me that always struggles to see Francine showing any genuine concern for anyone else to be honest!]
Lee: No? 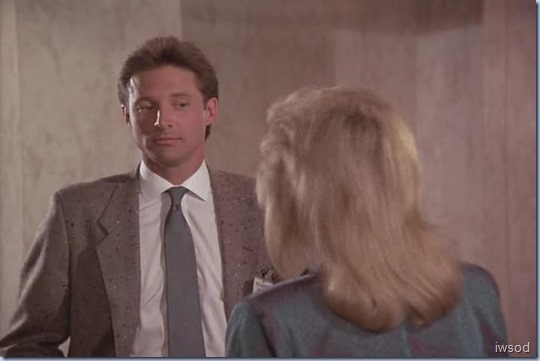 …There’s a lot you can learn about a person… 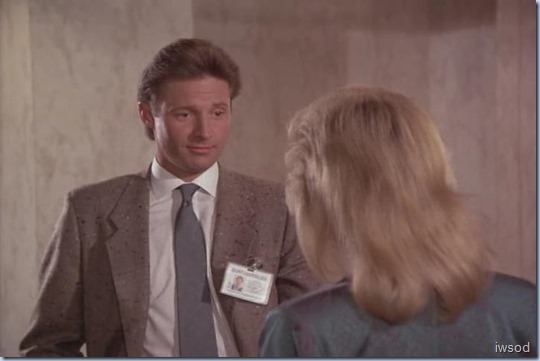 …. after a long weekend at Pinetop… 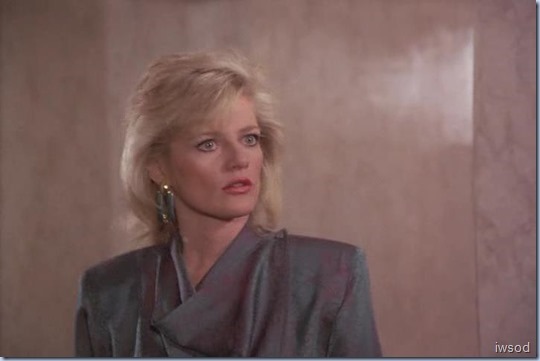 …especially if the skiing is lousy. 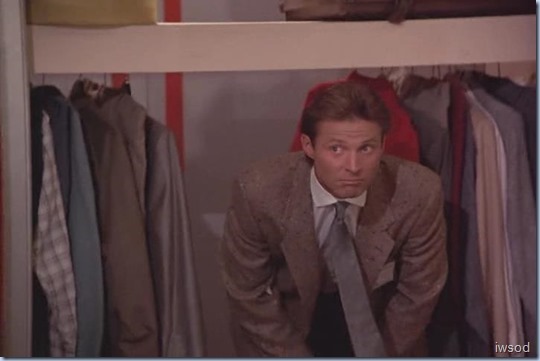 (Lee gives her a wink, enters the elevator with flare – avoiding whacking his head haaaa-

He looks pretty satisfied with the look he can see on Francine’s face as those elevator doors close..
We cut back to Francine – and see: She’s looking pretty confused!!!!! maybe deflated too? haaaaaa) 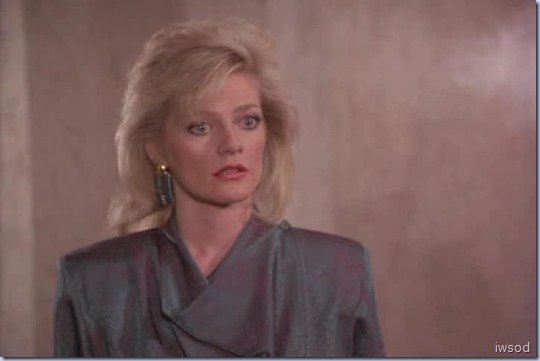 [Noooo I won’t include a pic of the wink, it always looks weird in a still photo lol! but Lee Stetson certainly has those winks down pat!]

Francine: (to herself) You never took me skiing.

She wanders off deep in thought and the scene ends…
[I think she’s maybe starting to question her take on this..??

Sooooo come on peeps what’s going on here with Francine??!!!
I think Lee really doesn’t go easy on her, he could have told her he’s for real about Amanda and to mind her own business. But noooo he just rubs it in some more because she’s meddling.. but hey – why quibble?!
I cannot wait to hear what you all make of this reaction of Francine’s…
I think the last remark about Lee not taking her skiing is telling – Lee being in a relationship with Amanda is the issue, IMHO Amanda can’t do better than Francine! Francine is the boss when it comes to nabbing eligible men! Not some housewife from Arlington! pah! Anyway, I’ll look forward to exploring this more in comments!]

(Time to catch up on the baddies. We see a dude walking along the marina, Peralta can be seen watching out for someone. The dude walks past him, and then calls out to Peralta..sneaky dude… Seems Peralta didn’t recognise him and whooooo this Jordan is super clever – a pair of sunglasses and he is sooo un recognisable! He’s a genius master criminal. 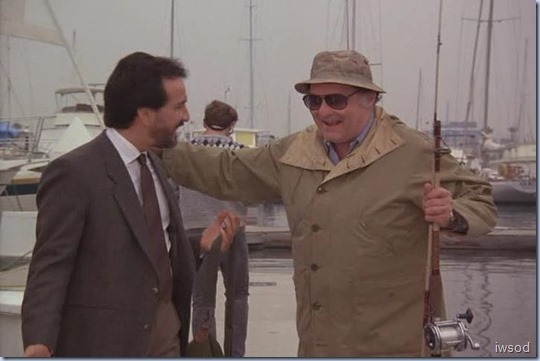 Peralta compliments his disguise. Rofl.
Jordan comments the coast guard didn’t notice him and they are getting sloppy.
[He seems like an arrogant fool to me. Maybe the coast guard knew who you were and are setting you up?! Muahahaha Jordan is so clever. rofl.]
Together they board Peralta’s boat.
Peralta reports that TP aka ‘The Professor’ has got a list of meeting options..
[I love how TP is short for ‘The Professor’!]

But! Jordan is a super paranoid and cunning baddie! And he isn’t trusting TP at all.)
{Jordan opens his coat and removes a pillow-like apparatus which fattened his waist line.}

Jordan: I did a thorough check on Aquinas when he started to figure in your operation. I’m sure you did too. Clean. Too clean. Should have figured…. When I decided to come to the States, I updated his file. There have been some developments. {He hands the envelope to Peralta, who pulls out the contents, scans them and then huffs angrily.}

Peralta: This explains a lot. I assume you’ll be leaving for the islands immediately?
[Whoa! Do they know about the elderberry pies?! whahaahaa]
Jordan: No, Raymond, you’re wrong. I came here to get this organization back in line and I’m not leaving until I do. Now let me see his list…

[Jordan is such an evil genius, he’s going to play along and try turn this situation to his advantage. 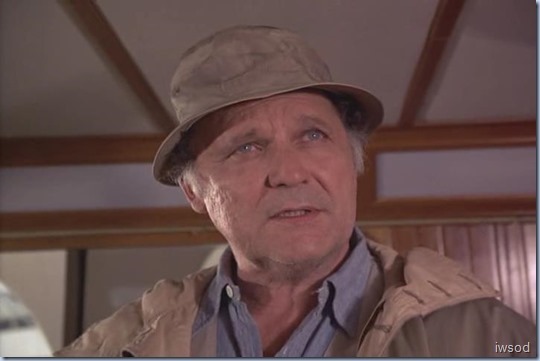 Muahahahahaha!!!!! Maybe he can snag himself some elderberry pie while he’s at it.. bonus! ]

Back to the Q Bureau…. 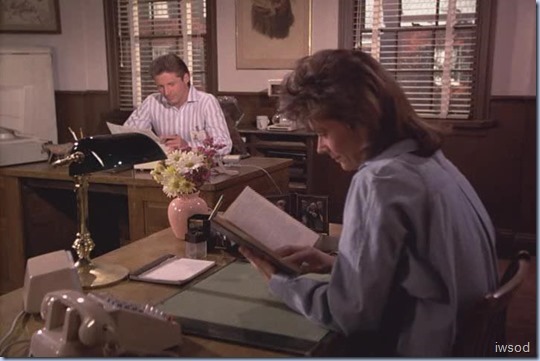 {Amanda and Lee are sitting at their desks.
[Is today casual Friday?!]  Amanda is reading the book TP gave her at the bookstore. Lee checks his watch looking worried. The phone rings and they each grab the receiver on their desk.}
(Amanda listens in and Lee answers.. )
TP: Oh Lee, The meeting is set for two-thirty.Right, right. Peralta got word to me that Jordan is here and he’s selected the Goss Farm for the location.

[What’s with the scratch and his shifty eyes as he says this?? Is TP lying? he sure looks like he is. but I’m guessing Peralta is probably lying too so hey maybe TP will accidentally tell Lee the right location?! haaaa now that would be funny!]
Lee: That’s great, TP…what you promise, you deliver. We’ll be there. 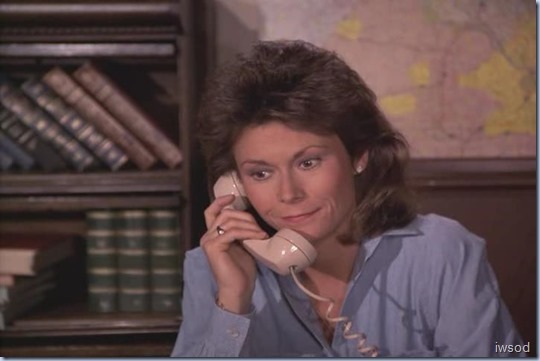 [We see Amanda looking on as she listens in, she seems to look a little subdued/sad? As she watches Lee’s happiness with TP’s results? Or is it just me? I honestly can’t remember how this turns out other than well of course there will be double cross galore but that’s all I can remember!]
TP: Fine. Oh, Lee…would you do me a favor and tell Amanda that I think she’s the best thing that ever happened to you.
[Gosh. What a sap. Almost like he’s thinking he won’t be talking to them again???!!!
Interesting to have this reaction juxtaposed with Francine’s]
Lee: Well, you can tell her yourself.

TP: Oh…thank you. Thank you for everything. Uhhhhh.. Well, I guess it’s up to me now and, uh, Good Deeds.

(TP hangs up pretty abruptly. No goodbye.. Lee and Amanda exchange a look but the scene quickly ends.)

[I don’t get the vibe they are thinking something is wrong?? Maybe just me.. The scene ends very quickly so maybe they do and we just don’t see it..]

I’m going to pause here & I can’t wait to hear from you!!

This entry was posted in Season Four and tagged Episode Post, Scarecrow and Mrs King. Bookmark the permalink.