Next up the scene is in Billy’s office… and the scene opens with a picture of crusty Luther..

Billy: For some reasons, six years ago, this character was running around DC with top-secret documents bearing your name.

[my my. Lee is looking good isn’t he. 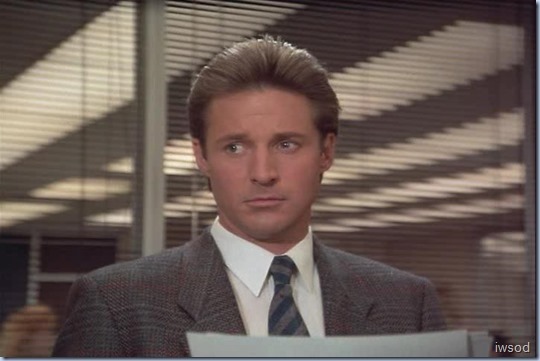 I like this hair. nice and short in the back

and at the sides.. ahem.. this is right up there with German hair!
Reminds me of this gem..
sorry I’m getting distracted.]
Amanda: Murdered, shot in the chest at least according to the preliminary report.

Lee: What the hell was I doing in 1980?
[Whooo some Lee chronology! Interesting!]
Billy: March through September, you were in Europe. It’s in here. And in your case file. The body was found in an access shaft….sealed and filled with cement and loose rubble… 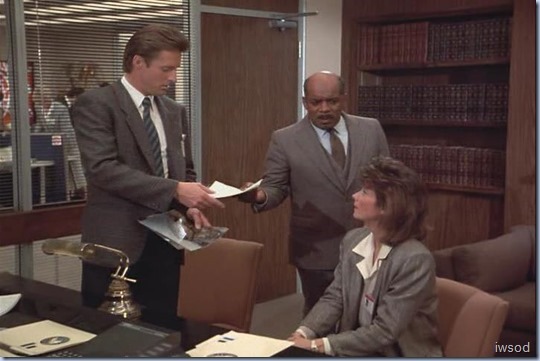 {{CINDY: they called that filled?}}
…when they finished the building six years ago.
{Francine bursts into Billy’s office}
Francine: Billy, I just heard that ……Lee…… Oh…

Lee: Relax Francine. As Mark Twain once said: “Reports of my death have been greatly exaggerated.” 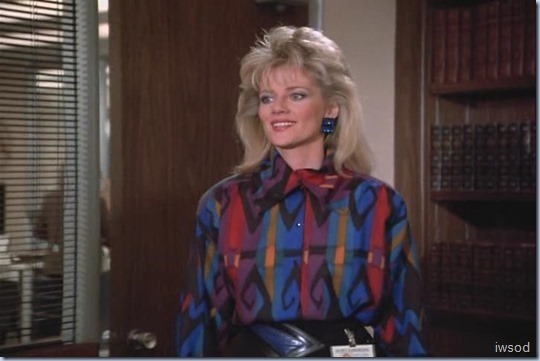 [How appropriate.. because that shirt of Francine’s is killing meeeeeee!!!]
Francine: That’s not what the local Blues are saying.
Billy: They’d better be saying “no comment.” I took over the case an hour ago. If it hits the papers at all, it’ll be as John Doe. Now, I want you two to get down to the city morgue and meet a detective from Capitol police named Trask. He’ll give you everything.

Amanda (flatly): Including the body?

…I told the cops to guard it and that our forensic team will meet you there and claim it. I wanna to know who this guy is, was and fast. (I thought they already knew who Luther was? maybe they just knew what he was doing.. but not who he was yet?) I know it’s been 6 years but it’s just too crazy and I’ve got a bad feeling about it. 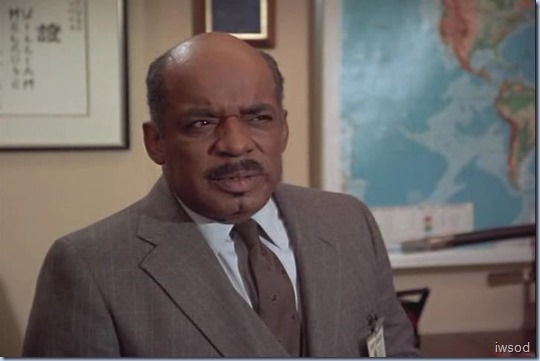 [I love how Billy says this, like – I don’t know why but this case bugs me, something isn’t right.. and my reaction is – well derrrrr!! it’s not every day Lee’s name is attached to a dead body like that.]
Lee: You’ve got a bad feeling about it?
[Exactly!] {Hands photo of decomposing Luther back to Billy.} 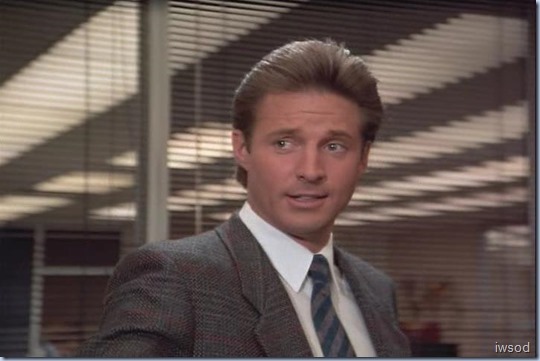 Moving on to a mansion.. [whooo must be time for more baddies?! 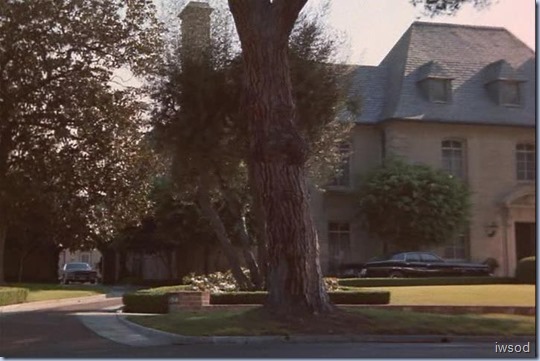 Good people don’t seem to live in mansions much in smk land.. We find Trask in conversation with a woman. Who has hair. A lot of hair. Big hair.]
Woman’s Voice: You said he would be under that building for 100 years.

{{CINDY:Woman is revealed to be Alice Babcock – a brunette with very over processed hair and questionable fashion sense.}}
[aha! that lady from sour grapes who burned her croutons to a crisp or something?! haaa
This conversation is just a version of the  Trask and Weathers conversation – it’s too risky! It’s a lot of money and worth it!! yawn. ]

Seems this Alice is a partner in crime with Trask. [Oh and.. that dress is a crime in any decade.]
A maid interrupts their conversation to let Alice know a Senator is wanting to know if she is coming to lunch.

[Okay. Soooo she’s connected.. rich.. and involved in murder!] {{CINDY:Maybe she is wearing a maternity smock? Those were pretty horrendous in the 80s.}} 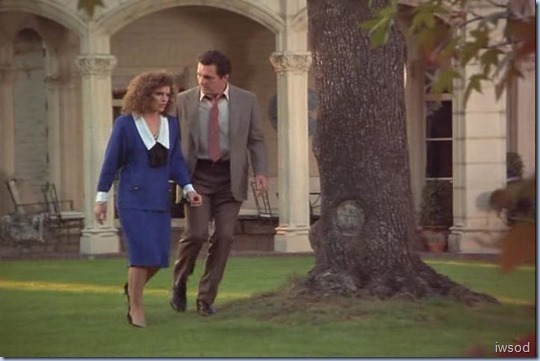 [I really don’t understand how if Trask shot Luther, and hid his body, he couldn’t also find the ISP that he later found on Luther’s dead body?! Whatev..]
Trask: …For a quarter of a million, I’ll take that chance.
{{CINDY:so Weather’s cut is 50%}}
Listen Sis, I want that money… 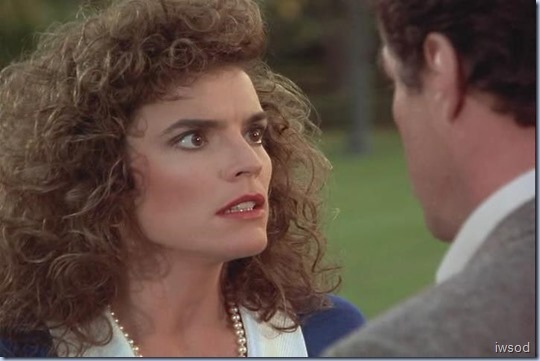 {{CINDY:Ahhh, she’s his sister. Another example in this episode of a crappy older brother. Maybe that is why the scene of Philip being a butt to Jamie was included}}
[Haaaaa good call on the crappy older brother! Dropping Jamie’s lunch on the ground now doesn’t seem so bad when compared to implicating your sibling in murder haaaaaa..]
…Six years ago, I let it slip through my fingers when darling Luther’s last living act was to fall backward into a construction shaft. I’m owed.

[Ohhh so I guess we are to presume that meant he couldn’t access the body.. but it didn’t look like a very big shaft to me.. Like I said whatev. Trask is owed!!]
{{CINDY:Yeah, how ungrateful of Luther}}… I just thought you ought to know.
[Ummm why exactly? Sharing ain’t caring! The less she knows the better!!! He isn’t trying to get money off her is he? I mean she looks loaded such that he doesn’t need to stoop to this stuff at this point?!]

On to a really tall building!

Seems this is the city morgue’s location..
Lee {off camera}: I can’t wait to check out the contents of that briefcase.
Amanda {off camera}: Yeah, the report said it was handcuffed to the body like a courier.
Lee: Using my name. They got the morgue vault buried down here in the middle of nowhere.
{Cut to Ron Trask doing something with a box at the end of an examination table. On the table is a sheet covered form of a skeleton. Trask reacts when he hears voices getting nearer.} [He seems ready for them.] 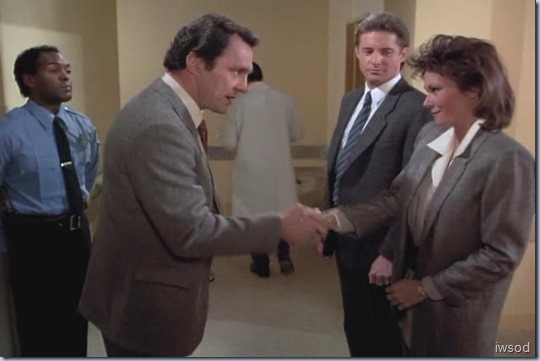 Amanda: Hello.
Trask: You must be Stetson
Lee: Hmm
Trask: You look a little healthier than the last time I saw you.

Lee: Save the jokes, will you? I’ve heard enough of them. What have you got?

(Trask sends the officer on his way.)
Trask: Oh, when I heard you people were involved I brought all the physical evidence together with the body. It’s not going to thrill you. There are no fingerprints, of course. But we might get some tissue samples, and if you can make a dental match.

Amanda: What about the briefcase?
Trask: It was empty, except for an envelope. Come on, I’ll show you the whole thing.

BOMB EXPLODES
[maybe it’s a bit mean of me to include this image since it’s really obvious it’s not our fabulous duo. but haaaa it’s funny so I want to! Poor SMK just wasn’t made for times when people could snap images of frames like this one above!]

Big boom boom!
[How nice of Trask to send that officer on his way before the bomb went off. cough cough. 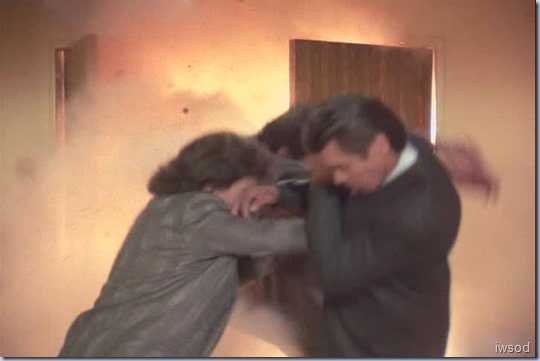 Whoa check out stunt Amanda! She does a great job not getting blown up!]

Back to Billy’s office..
[Whooo Lee is lookin all scruffy and sooty.. just when I thought that hair was peak Lee Stetson and couldn’t get any better? I stand corrected! Focus Iwsod!!]
Billy:Thank God you’re in one piece.
Lee: Yeah, We were shielded from most of the blast. But if the sprinkler system hadn’t of kicked in, I think the smoke would’ve finished us off.
{{CINDY:So is Lee exaggerating here? Or is Trask really that incompetent and almost killed himself with the bomb?}}
[I read this as Trask knew the sprinkler system would kick in and save himself. So he wasn’t really putting himself at risk of dying, but it helps him appear above suspicion.]
Billy: How’s Amanda?
Lee: Doc McJohn says she seems fine. She went home to change her clothes. That cop, Trask, got bruised up a little, but nothing crippling..

Billy: Damage at the morgue?
Francine:The explosion fire gutted the room. Our John Doe’s bones and the paperwork they found in his briefcase, so much ashes. All that’s left is the ring stone and the handcuffs he was wearing. And they’re in the lab. 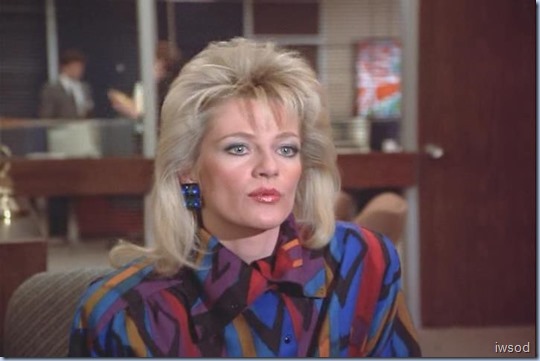 [Wait a minute. What are those earrings?! Oh Francine. We need to call in the fashion police! They’ve been slacking off and Francine is getting way too confident with her fashion choices/risks/ nonsembles!]
Billy: How did this happen?

Francine: The morgue is a public place… [Yeah! You think they try and limit who can go into that space with dead bodies?! Evidence??!! Billy you fool!!! haaa… ewww!!! Anyone from the public could go into the morgue where the remains were? sure.. sure.. I doubt it!]
…Somebody could have set the bomb before we sealed it off.
Billy: We’re not certain the bombing had anything to do with our dead man. 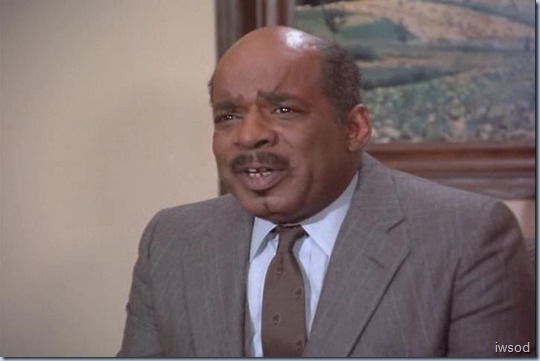 [purlease! Billy you seem to be extra dumb this episode! what is up with you?!]

Lee: Billy, you know as well as I do, someone is working overtime to keep us from knowing who he was…

…I was part of that man’s life when he died… I’m going to find out why.

[Too many images of scruffy Lee??? I DIDN’T THINK SO!!
So, who was the last person in the morgue alone?! gee I wonder..] The scene ends there..
[Lee is determined! Uh oh..]

On to the evil golf course! Weathers is combining working on his putt with the sales of top security documents! 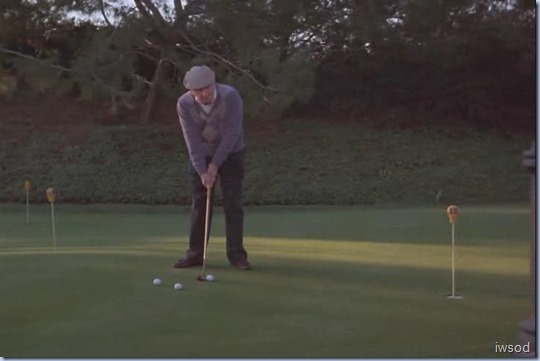 In the evil golf cart we find a man inspecting Lee’s ISP.

or.. as Cindy puts it:
{{CINDY:Sharply dressed bad guy who resembles Brad Pitt looking over Lee Stetson’s security thingy}}
[Brad Pitt? haaaaa.. I guess this is one way to keep us interested in watching the baddies!]
Weathers: Well?

Brad: The picture could be a problem.
Weathers thinks with hair dye he can pass himself off as Lee. [no way. rofl.]
This guy is being paid by someone to do eeeevil! Weathers randomly throws in a guess that it’s about Zurich disarmament talks or the French Arianne launch. But.. Brad isn’t telling. Something tells me this probing is viewed as terrible baddie etiquette!
Seems these ISPs are valid for ten years.
Weathers: …This ISP isn’t another clever forgery. It’s the real thing made by the man who made Lee Stetson’s.

[oh?? Interesting.]
… And another thing, an ISP is a hard document to police…
{{CINDY:Umm, why!?!}}
[Because they said so.]
…Even if they cancel it or issue an alert. There are always so many other uses.

Brad says he’s interested in making the purchase, he just has to check with his people first.

{Brad drives off in a golf cart, trying to look menacing as one possibly can driving a golf cart}

[it’s true this guy actually somehow manages to pull it off in my view!]

So Brad drives off, and immediately, Trask pulls up looking much less menacing in his golf cart! Lol.
Trask’s arm is in a sling. Weathers climbs into his golf cart. 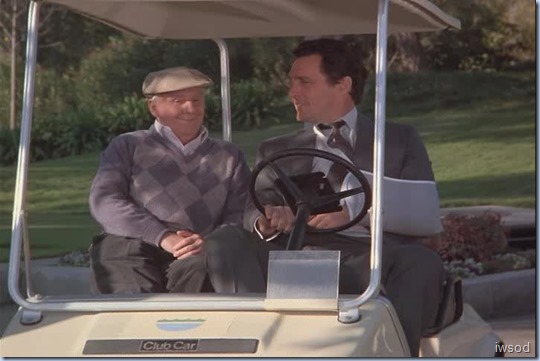 They have another chit chat about potential problems.. Lee and the agency continuing to investigate.. and how Trask will take care of it. Yawn. Rinse, repeat.

Back to the construction site. Lee and Trask meet. Seems Lee is starting to suspect Trask here.. what do you think?
Lee mentions the briefcase was full of government documents, but Trask corrects him saying the envelope was empty.

But! Lee has spoken to Officer Jastrow, and says he was told the envelope was ‘heavy, even fat’ Lee suggests Trask made quite the effort to arrive at this crime scene – and Trask says it wasn’t unusual, and Jastrow is making trouble because he got in trouble for messing with evidence.
Lee: That was my name in that briefcase. So now, I’m stuck with the paperwork. An ST-10, Interagency ADB, and an FF-2. You know, I think that bomb was, uh, an inside job. How about you?

{{CINDY:One would think, almost being blown to smithereens that you would be slightly curious who set the bomb, no?}}
[Exactly right Cindy! He may be homicide but he is also supposed to be a victim. Lee is super dedicated to finding out what happened to someone using his name, and Trask is utterly uninterested in finding out what happened to.. himself?! haaa]
Lee: Well, you’re not supposed to have an ST-10, ADP and an FF-2 on your boss’s desk by 6.
[Whoooo sounds brutal. Death by paperwork…]

This entry was posted in Season Four and tagged Episode Post, Scarecrow and Mrs King. Bookmark the permalink.