Off to the agency Lee goes to regroup and hopefully track down Amanda..

well looky here.. he got a prized spot out the front. haven’t seen that angle before.. If he hadn’t lost Amanda just now, he would be thinking it was his lucky day..

Billy is trying to reassure Lee.. no luck the car from the accident isn’t going to help him find Amanda, it was stolen..

Lee: who knew Amanda was going to pay for the chilli dogs. It was suppose to be my treat!

Whoooo francine reacts to this..  Mooooo francine! (sounding like friends aren’t they?!!)

Awh doesn’t Lee look all depressed there sitting on the couch..

Soo the ‘he’ they were worried about was de Gregorio.. shocker.. Billy sums up the situation, stating  the baddies are going to do something it will be in the next 36 hours.. Lee’s response??? 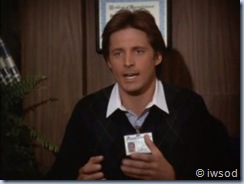 Lee: But Billy they’ve got Amanda!

(ahhh Lee.. Amanda is all he cares about.. and I love him for it! He doesn’t seem to be able to focus as well as he use to..) Lee is off drawing conclusions about Amanda

having the code, not being able to decipher it and then them killing her as she is no further use to them.. he is

struggling here! He covers his face, plays with his hair, scratches his forehead and tries hard to compose himself.. poor Lee!

The phone rings and Billy answers. 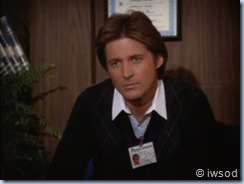 I think Lee is thinking it is Amanda.. but.. phew.. it isn’t.. the Agent contact Martinez has been found.. in the potomac.. poor Martinez..

On to Amanda, being questioned by the baddies in some dump..

El Lagarto: Who sent you to pick this up?
Blindfolded Amanda: Pick what up?
El Lagarto: It will be easier for you if you tell us what we want to know.
Amanda: I can’t see anything. (LOL!!)

Brave Amanda tries to cover things up. She’s getting use to this being kidnapped caper..(only she still hasn’t grasped the concept that once the baddies know they have no use for you, they kill you!!)
Finally- a baddie who calls her Mrs King, but should actually know her name because he has just read her driver’s licence!

El Lagarto: Mrs King, we are not fools! who was that man with you?….

El Lagarto: Shall I ask Ramon to get nasty?
Amanda: No, that won’t be necessary. His name was, ummm . . . (the switchblade knife snaps open and so does Amanda’s tongue!) Phil

Jackson, he’s a police officer, he probably got the license number of the car and there’s probably a SWAT team on the way to surround the building right now.

Phil Jackson huh? Does Kate have a brother called Phil or something?? anyone??? (Again, Amanda is held captive, and scared for her life – but she somehow KJ still manages to be funny!! No Tanks Amanda? Lots of them??!!) 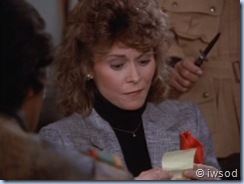 It is too funny when Amanda tries to read the cypher!!!!!

Amanda: “SLYMPH XLGF ZBN ”
El Lagarto: What does it mean?
Amanda: I don’t know what it means, I don’t know code, I don’t even have a code name, and they just give me these little things to do, I promise you, I don’t know anything.

El Lagarto: Well, that is too bad. because we have absolutely no use for you then!

Amanda: Oh well good because I have a luncheon date-
El Lagarto: Take her, Ramon.

Immediately on hearing Amanda won’t be needing the bus- we hear Dotty reassuring Mamma Dean that Amanda will be back any minute.. Dotty is putting on airs and going all out to impress. Oh dear.. doesn’t she know Dean would be lucky to have Amanda? Hmmm.. Dean’s mother seems to feel the same way Dotty does…grrr  Dean’s mother seems to be very direct in asking questions about Amanda.. I wouldn’t have been surprised if Amanda had shown up and she had asked Amanda ‘what are your intentions with my son’??? !!!!!  Wimpy Dean being a mother’s boy… what a shock… not! At least Dotty is singing her daughter’s praises.. but.. she is overdoing it which makes her look desperate!

Evelyn: We were discussing dependability.
Dotty: That’s a very important quality. When Amanda was a child, I used to tell her that over and over again.

Dotty: Yes, well, Amanda, too. I just told her that over and over again to make conversation.
Dotty is too funny!!!

Evelyn isn’t impressed that Amanda doesn’t have any employees- whoooo!! Not good enough for her Dean eh? Love how Dotty tells the story

of Amanda pleading with the ficus!!

so over the top..

Stop trying Dotty! Evelyn is not lapping this stuff up!! 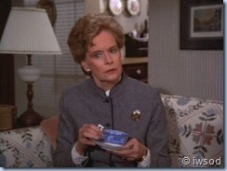 Back to Amanda.. oh whooo hoooo way to go 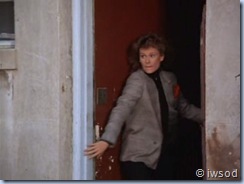 Amanda!!!! what a great kick! you go girl!!! Amanda must have made it to the agency ‘learn how to kick’ classes… whooo… also the ‘how to lock the door’,

‘how to run’, ‘how to steal a car’ (that someone has so conveniently left the keys in) , ‘how to speed down a street while avoiding bullets’, and the ‘how to protect your face if you can’t avoid a collision’ classes.. oh my.. they have come in handy..

Phew! Amanda for the moment is safe from the

baddies.. Amanda arrives at the hospital and begins to be examined by the doc..

Back to the agency.. Martinez was a very careful agent.. but.. as Lee rightly points out.. not careful enough.. 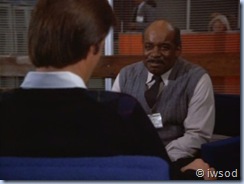 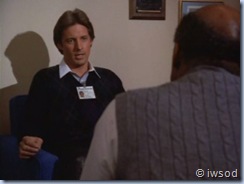 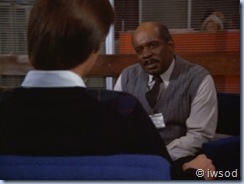 Billy: what do you mean?

Lee: do you think she is still alive ??
Billy: I haven’t heard any differently, have you?

Of course, all Lee can think about is Amanda.. and how he blew it.. (I don’t think it was Lee’s fault..but you know Lee carries the weight of the world on his shoulders, especially when it comes to Amanda..)He isn’t worrying about de Gregorio.. couldn’t give a toss.. all he can think of is Amanda.. Awh!!!

This scene with Billy and Lee worrying about Amanda reminds me of Saved by the bells- where Billy asks Lee if he would be so upset if it was someone else.. Only this time, Billy can see Lee is upset, and.. Billy doesn’t need to ask the question now- he knows the answer! Amanda is special.. awh!! and because he knows this, Billy waits till Lee has left his office to phone Francine and ask her to check with the hospitals.. (although why weren’t you doing that already?? )

Dotty is still (over) selling Amanda fine qualities to Dean’s mother.. “Mother, stay calm I broke a shoe lace I may be a little late!” rofl!!!!!!

Uh oh..  the baddies haven’t given up on silencing Amanda.. uh oh. (and that baddie on the left is wearing a very similar jumper to Lee!)

black out certain aspects of their life -people or jobs that we learn are emotionally complicated..

Dotty turns up and Amanda remembers her.. So funny how Amanda avoids telling Dotty about the stolen car! Dotty: Oh, you poor thing. And the salesman told you that that car was so safe!

Amanda: I wasn’t in my car.
Dotty: Well, the person you were riding with, are they all right?
Amanda: Apparently, I was alone. 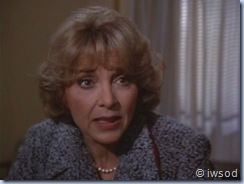 Dotty: Can you remember anything?
Amanda: Nothing since this morning.
Dotty: Lunch with Dean’s mother?
Amanda: Dean who?
Dotty: Oh.
The first draft of this has Amanda remembering Dean when Dotty asks this question- and Amanda says ‘ she (Dean’s mother) must think I’m very rude’ – Good decision to leave that out! Amanda forgetting Dean makes much more sense – because it is emotionally complicated! she is dating the guy and needs to break it off..

Ahhh what a fantastic place to leave things.. for now! Amanda’s forgotten Dean? I’m in a happy place