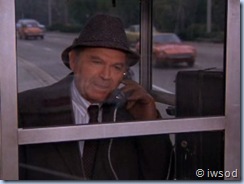 Back to the agency and Brobich calls with his instructions as planned.. Ummm..  Is it normal to have a public phone next to a 6 lane highway?? just wondering how Brobich expects to be able to hear anything! Brobich is so matter of fact.(I think he might have done this before!)  ‘Then

Miss Desmond will be killed and many lives will be lost.” – I don’t know why but he sounds like a flight attendant going through the safety instructions having done it ohhh 50 times that day already! Hmm.. maybe he took 50 takes to get that scene right..but it still works because he is so nasty it fits!  (what’s this about many lives being lost??)

So on hearing this, Billy and Lee argue about involving Amanda.. well gee Lee you brought Magda to her house… anyway.. so Lee is worried Amanda is going to

get hurt.. Billy doesn’t see any alternatives.. and so for once he acts like a boss and tells Lee he isn’t going to argue with him and this is the way it will be.. Amanda

takes Magda to the airport.. they meet on the way. Done. End of story.. whooo Billy got a backbone!

So Magda and Amanda are off for a little road trip and some more girl talk..

Amanda: I’m not risking my life for you, at least I hope I’m not.

Magda says she has to go along with this trade, or the agency would send her mother and sister back to Hungary if she didn’t co-operate.. Amanda assures her that would not happen – you know, I am not so sure they wouldn’t! Amanda is very naive when it comes to the Agency sometimes.. don’ t you think? ( which is ironic because Amanda then launches into a speech on trusting people.. Trust Lee? sure.. trust Amanda? sure.. trust the agency? Hmm.. )

Well, finally Amanda is honest with her and expresses her anger.. I cheered when she finally admitted it!! Drat.. she admits she’s angry and then apologises for it – Amanda!!!

You don’t need to apologise for it!!! ( anyone else think Amanda has major issues with expressing her anger?) Magda copes with it pretty well I think.. 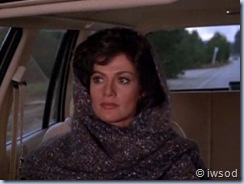 At least Magda says sorry.. and admits she has much to learn.. [The light is all weird- you can tell they filmed Amanda and Magda shots at different times of the day]

They stop at a set of traffic lights….

Next thing we see is the Baddies Limo driving 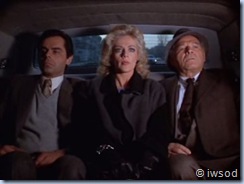 along the same road.. As they pull up behind Amanda at the lights we see an interior shot of Francine sitting squashed between two baddies in the back seat- but the outside view if you look closely is of buildings! not trees and countryside! oh well.. and back to the exterior shot they stop at the same traffic lights..  How did Brobich know to check out Amanda’s car? Magda is wearing a head covering.. Oh and when Brobich

asks who is that ahead of us- he suddenly no longer has on the coat that he had on not 2 seconds earlier in the other interior shot that had the city view outside.. ( looks like they had another scene in the back of the limo earlier which was cut and used a couple of shots for it) work experience edit guy that week?

They pull up next to Amanda and realise it’s Magda… Uh oh!!! 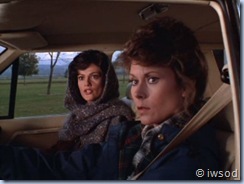 Amanda hits reverse and floors it.. go Amanda!! but wait.. in reverse and 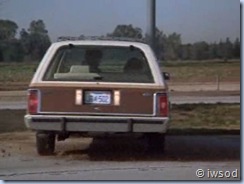 from a distance it seems Amanda has grown a foot taller. go stunt Amanda!! maybe the ending won’t be such a snooze fest after all!

Love the dialogue over the stunt driving.. Magda: what are you doing?
Amanda: I haven’t the slightest idea! (gee Magda now don’t you wish you had been nicer to Amanda??? hmmmm????)
Magda: they’re following us! Amanda:Stiiiiiiillllll???
Magda: watch out! you’re losing control! Amanda: Miss Petrak I’m doing the best I can will you please stop telling me how to drive!

(Amanda is still polite in the middle of all this!! haaaaa.. oh my gosh!!)

The ladies run to an empty playground, where there seems to me to be nowhere to hide where baddies wouldn’t see you… how can the baddies not see them?!

ok guys.. go have a look at this! we see a sweeping shot of the helicopter swooping down over where Francine and Brobich are standing next to the limo.. once the helicopter passes.. Francine magically has gained about 20

kilos of muscle..and a really really bad wig!! Just in time to give Brobich the old one two punch and throw him!!!

Ok.. there is sooo much wrong with this whole helicopter thing.. I am not even going to bother discussing how many times Lee (or stunt Lee)

doesn’t match his previous shot.. That looks sooooo real! not! Whahahaha..(Lee shooting with his right hand?? why???? weird!! he is left handed!!)

Anyway, after doing a number of passes hanging out the helicopter yelling ‘look at me! look at me! I’m hanging out of a helicopter waving a gun around’ Lee ( his heroically handsome status confirmed) swoops down with the helicopter.. firstly picking up Magda,  then rising again and swooping again to collect Francine.. (gee girls.. how was it seeing yourself face to face??!!) then.. finally Lee

swoops down once more and calls out to Amanda.. Super Lee!!!!! 3 minutes of swooping Helicopter is a bit much.. but.. I do enjoy super Lee swooping down to save all the ladies…
(Hey! He’ll send you all flowers first thing in the morning!!!!)

How did Lee manage to hang on to Amanda like that? wow.. Errr hold me closer Lee!!! 😉 I’d hang from a helicopter for that.. no question..

Back to Amanda’s and Dotty is on Amanda’s case in her passive aggressive way about the car.. Now lay off Dotty.. because you were bored up in your room Amanda now has a cold too!!  Amanda is looking lovely in that outfit, make up and earrings.. and… no headband!!!! 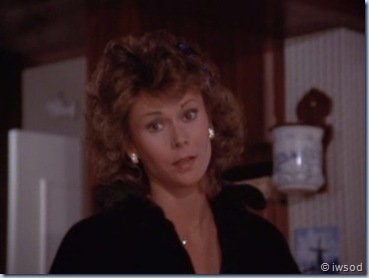 beyond?? I thought they were loaners..but then again the maid wasn’t at the hospital waiting to collect the jewels! )

Amanda: Oh, you do?
Dotty: Yes, you see, I haven’t read Agatha

Christie for thirty years for nothing. I don’t have one theory. I have at least six.

Cheeky Dotty: Give my best to Bud Marcher!
Amanda: Mother!!!!!!

Ok, Tag time.. and back to the same embassy as we started with…another close up on the goodies on offer.. I forgot to mention the episode opened

with a fantastic shot- of champagne and then the tag opens with this shot.. nice touch!

Amanda says he doesn’t owe her anything.. and that in the end she was happy to help Magda.. she is a classy woman huh.. (even if I think she is repressing her anger! )

Ohhhhhh My! I never saw this before.. but with the official dvd’s clear picture it is now clear!! – check out the back of Amanda’s dress! whooo haaa! Go girl!! Bud Marcher would love that dress

Can you just imagine Lee putting his arm around Amanda to lead her somewhere.. only to find – whoa!!! he is touching her back and not the dress?! man I wish we had seen that!! 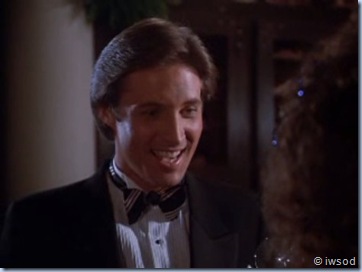 Sorry if you like it.. but I guess when it comes to Lee in a tux I am a traditionalist!!

Soooo Everyone!!! What do you all make of Lee’s hesitation over saying:

“You know..ahhh…. these things go on… 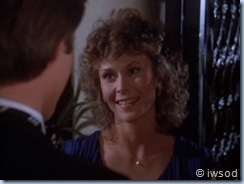 Amanda is unfortunately a little out of it!!!! If I didn’t know any better I would think what Lee said and how he said it was a total come on!!! Anyone got any ideas on this??

Amanda: Ooohhh
Lee: Mmmmmm (hooo haaaa.. the way he is looking at her!!! he glanced at her mouth again!!!) 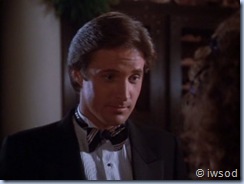 Amanda: well.. you didn’t really have to bring me I…

Lee: I hustled you out of here in a hurry the other night, and you said you’d never been to one… and I err I

guess… you did have to put up with a lot from.. Magda. (and Lee..)
Amanda: you know I just wanted to ask you a

question and it will really have nothing to do with eeerrrmmmumm excuse me.. our professional relationship and all… well ah in

the helicopter. First you saved Magda, then you saved Francine and then almost as an after thought you saved me. (why is Amanda smiling when she finishes saying this.. is she testing Lee here?? or teasing him???? thoughts??? I’m going with Teasing!  ) 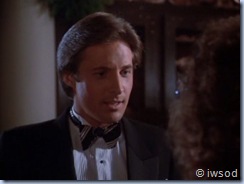 Lee: It was not an after thought
Amanda: oh I just you know..
Lee: It was the first time that you were in the clear. 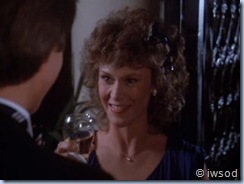 Amanda: you see, I knew you would explain it perfectly (clink of the glasses.. go Amanda!) Doesn’t Lee give a huge

smile here.. oh he is lapping her up isn’t he!

Amanda: how did you find us?
Lee: well I saw somebody (the stunt driver!) try to drive a station wagon into the swamp.. 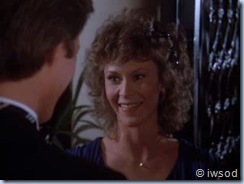 Amanda: Lee I know you think you owe me

something. but.. I think I’m catching mother’s cold I want to go home.. 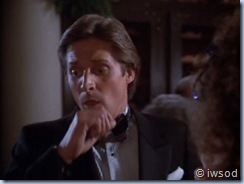 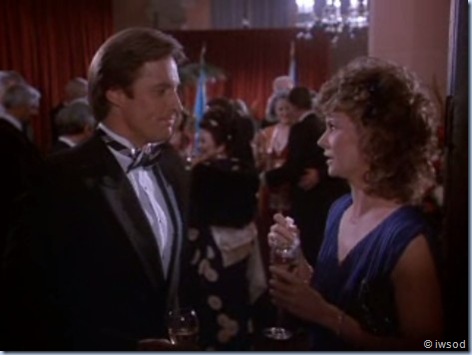 Lee: if it will make you feel any better,

Magda’s got it too!

The episode ends there..  oh my.. the way Lee is looking at her.. I am surprised he is being so obvious actually.. maybe with his impending cold, his defenses were down!! but lucky for him, Amanda is a bit out of it and she doesn’t seem to notice that much. (maybe she is too mesmerised by his beautiful beautiful beautiful  eyes!!

I love this final scene they are so sweet together! At the same time, I suspect there was some weird editing going on there.. Lee’s huge smile at Amanda asking how did you find me I think doesn’t fit and is from later in the scene.. and a few of the edits from wide shot to closer shot just feel weird.. still it is clear they are enjoying each other’s company.. Lee is being a bit flirty.. and they are both probably a bit tipsy and on cold medication.. LOL.. Have a look at the scene and tell me what you think..

So this is the start of the Lee side part!  I 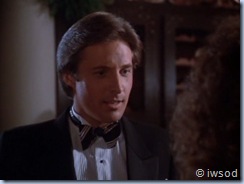 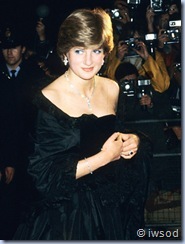 it  reminds me of early Princess Diana(this pic was 1991! so Lee was copying her not the other way around ha-edited to correct typo – the photo was 1981! Thanks for pointing this out Leanne!!  Lee was definitely copying Diana! – thank goodness he drew the line at the topless gown 😉 )! whoops!!!now you know I love Lee.. and do not want to sully his heart throb reputation here.. heheheee… but it made me laugh and laugh!!