3/5 Season One, Episode 17: The Artful Dodger-Scarecrow and Mrs King

On with the episode.. Grumpy Lee (Grumplee??) is driving with Amanda to their job..
Amanda: Well, you haven’t told me if I’m dressed properly for the job.

Lee: Yeah, you’re fine.(He answers her without even looking! Too busy swerving away on his steering wheel when they are going straight ahead!

)
Amanda: I mean, you said warm and comfortable and something I could move in and I’m very warm

and comfortable and I can move in this, it’s a down jacket, and you haven’t told me what the job is yet.

Lee: Exactly what I say!

Amanda: Exactly what you say. 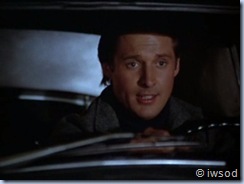 Lee: Right.
Lee!! you make Alan look like he isn’t half bad at the moment.. ugh… he’s so abrupt! Why? because Lee is preoccupied because of the job he has ahead of him?? or are we suppose to be thinking he is cranky because he is jealous? Because I am not convinced of either of those options- there’s no explanation.. All I know is, he shouldn’t treat Amanda like that and it bugs me.. ( yep – bug!!)
Lee: Amanda, believe me. This is important.
Amanda: It is?
Lee: Yes. I’m going to try to prove that the Agency didn’t set up a faulty security system at P-WAC, all right?
Amanda: Oh, hah! Well, of course, they didn’t! I mean, that’s your job! You set up security systems, you catch spies, you protect the country. And nobody does it better. (James Bond Maybe??!!)Nobody. And I’d like to see somebody prove that they could.

Lee is still giving Amanda attitude, and she positively gushes over him.. why?? It is ridiculously out of proportion for the situation.. kind of embarrassingly over the top if you ask me. I don’t want to watch Lee be so rude to Amanda and then receive all her praises..

Lee: Well, thank you. It’s, uh, it’s kind of nice to have a vote of confidence now and then.
Amanda: I mean it. And you’re right, it is important, it’s very important.
(I could take all this a lot better if I thought Amanda was being calculated here in her praises, maybe trying to keep Lee’s gruffness in check,  but I don’t think she is.. she seems to be oblivious to his rudeness.. why?? uggghhh!!!)
Lee: Ah, it’s more than just clearing our name in this. Somebody got through that system. Somehow. We’ve got to find him before he causes any more damage than he already has.

Amanda: We have to stop him.
(At the end of this scene Lee stares at Amanda. She meets his gaze, then turns away….) At the end here Lee is watching Amanda a lot..  eyes straight ahead scarecrow!! you’re driving!!.

Next thing we see Lee sneaking into P Wac.. Lee the sign says positively no admittance!!!! ( Ok the sign is the first thing you have to change Lee!)

Soooo why does Amanda need to time him? The Artful Dodger managed to do it without a stopwatch sherpa!

That’s top security Lee has designed there.. that he can run from the fence to the door in less time that it takes for the monitor to do a sweep? doesn’t that just prove that Lee’s security was not as perfect as he (and Amanda) would like to think it is? I mean the guy is gorgeous and fantastic at his job, but he isn’t perfect! ( and that’s one of the reasons why he needs Amanda!!

Why is it so funny to Sykes that they see ‘the 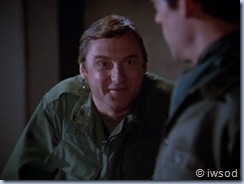 woman but not Stetson’??? I would guess it’s because it proves Lee’s security is full of holes?? but it is not pointed out.. this whole exercise is seen as proving Lee is faultless ( ugh!! ) It sounds like he knows they are coming..

Do Lee and Amanda have to stand quite soooo close for Lee to be able to use the mirror to look around the corner?? hmmm??? Amanda doesn’t look like she minds one bit.. (Lee is focused on the job.. or at least appears to be!)

(I think it is a nice touch that at this moment we can see Amanda’s concubine (yuck) ring!) Lee tells Amanda there is no way anyone can get past these guys.. Amanda again tells him yeah nobody can do it, ie crack his system…but well.. someone did! ( Lee Lee he’s our man!! ugh.. enough of the cheerleading Amanda!!) Lee has an idea.. no one can get past unless….

OOOooo kkkkkk.. How does Sykes know that this woman coming up to the front desk is ‘Mrs King’???  He must know Lee and Amanda are coming..

It seems this idea of distracting the guys at the 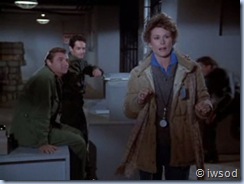 desk only comes to Lee once he gets stuck.. You mean he only brought Amanda to hold the stopwatch?? and the microfilm thingy-how did he know he would need one?.. That’s ridiculous.. he didn’t even need it.. ohhh none of

this episode makes sense to me!! Off she goes with her black belt in confusing people to distract these guys.. and Lee sneaks by the front desk unnoticed.. yippeeeee.. take that Sykes..  although sadly, for this episode – it bugs me Lee gets to prove this isn’t his fault! That’s weird! I should be happy our hero is in the clear – this episode is so off!! and I think Lee is partly to blame! eek..

Oh goody.. time for some Lee gloating and Amanda cheerleading.. ugh!!
Sykes: Then you did get in.

Lee: Oh, yeah. I got in.
Amanda: Yeah, he was really good, like a cat burglar. 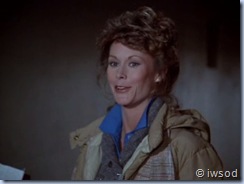 (Lee the artless dodger.. )
Oh my.. Lee soaks it up,  chuckles and smiles.. happy that he has proven what he needed to..but also thanks to Amanda’s enthusiasm in his abilities.. Aie!!! I think I am overdosing on the Lee compliments from Amanda this week.. too much! It’s all too much!

Why would Lee and Amanda be happy he got in? It proves the security is not as tight as it should be?? Ok, Lee thinks it proves the burglar had the security plans – and they proved a distraction is needed to get to the vault, but the fact remains, Lee’s security didn’t keep them out. shouldn’t better security be full proof? even with the map??  man this episode!!!

Lee points out to Sykes the burglar must have had the map, ie. it is the army’s fault..
Lee: I got in on this. (he points to his map)Security plan for the entire 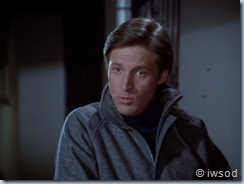 complex. Now, did our night visitor have the same thing, and if he did, where did he get it?

Sykes: How would I know? You’re the expert.

Lee: Well, maybe you can answer this… 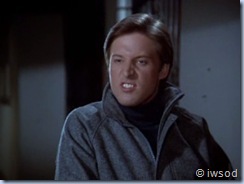 To my mind, another agent other than the one who had been personally involved with the security system at PWAC would have been a better choice to try and break in and prove that the army was to blame for the break in….
Lee really seems to want to take Sykes down a peg or two.. ( he seems to feel that way about a lot of people in this episode!) I am usually all for triumphant and confident Lee – but something in his demeanour this week instead yells ‘ cocky arrogant Lee’ .. and.. I am not a fan of it.. this is not to me normal Lee Stetson.. and I think it makes him look like a smaller man to be so  condescending with Sykes. Yep, I think he is condescending with his whole ‘ maybe you can answer this question.. it’s easier..’

Hurray on to the microfilm room.. wow.. check out that technology!!

Grainger… Lee and Amanda find his info on the microfilm.. Lee already interviewed Grainger? Whoooo his alibi was too good eh.. how convenient.. tee hee… Errr dishonourable discharge isn’t ‘kinky‘ as you put it Lee? ( maybe that word does not mean what he thinks it means!

) why don’t you think dishonourable discharge is a red flag?? huh???

Ha haaa Lee!  Finally.. something to laugh at!

This whole exercise exercise thing is a bit of a stretch for me.. but.. I’ll go with it because I like it when Lee is drawing a blank, but Amanda solves the case!  heheheee.. Of course.. Lee doesn’t say anything to Amanda when she notices this.. Ugh!!! Leeeeeee you could give Amanda one little compliment.. it doesn’t have to mean everything!!

Love the look Amanda gives when Lee points at the films and says “grab an address off of one of those things will ya” – where is your please Lee??!!!! Amanda just groans.

(Finally Amanda notices his rudeness?? Nope, it seems to me that she just hates the microfilm machine.. which is probably the reason why Lee brought her along- because he can’t stand them either! ) …. I could slap Lee here.. he starts looking at his watch and hurrying her up.
Lee: come on come on! (he is so psyched and busting to get a move on.. ) 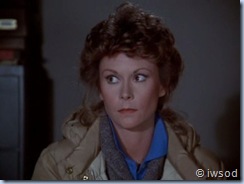 Amanda: Lee, rushing me will make me nervous
Lee responds by giving her an ‘ok’ expression 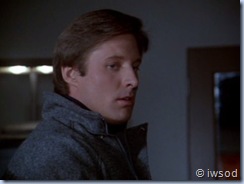 At least he doesn’t say anything..  and he doesn’t argue.. he takes a deep breath… well done Amanda! hehehee.. 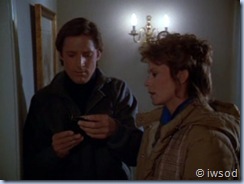 necessary lock pick out of his little collection there, exasperated at how long Lee is taking Amanda reaches out and tries turning the doorknob.. and ta da!! 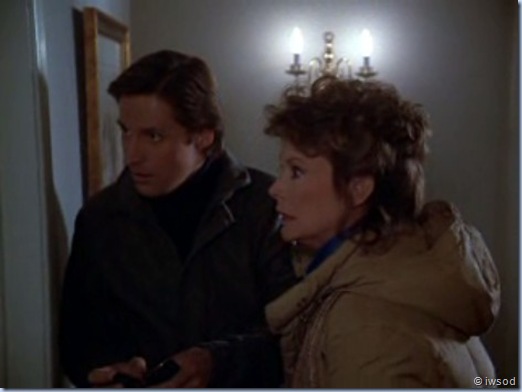 It was open! heheheee.. Love the look Lee gives her!

Amanda whispers: I had a feeling..(whoo hooo this is more like the Amanda and Lee that I know and love!!!)
Lee: (silent for a moment stunned!) hmm yeah.. Again, they are standing mighty close when

Amanda says: you know this is really spooky in the movies when you do this somebody jumps out of the closet at you and

there’s a dead body hanging from the rafters!
Lee: Oh Amanda!
Amanda: Besides that, I think it’s breaking and entering.

Hey, it looks like the movies are right sort of…. an unlocked door equals a dead guy! Grainger has been murdered.. yep.. spooky!

I find it interesting that Lee seems to look at Amanda a lot to see what she thinks in this scene.. (very out of tune with how Lee has been in this episode so far- which is why I like him in this scene!! Much more normal Lee! Not sweetness and light, but not nasty and arrogant… )  he isn’t in super command mode like he was at the PWAC.. Notice how he calls out to Mr Grainger and he doesn’t answer.. and so he turns to Amanda to see what she thinks?? he doesn’t seem like he particularly wants to get any closer here! heheee.. did anyone expect mr grainger to suddenly sit up and go Boooo!!

Love Amanda’s line and expressions as she 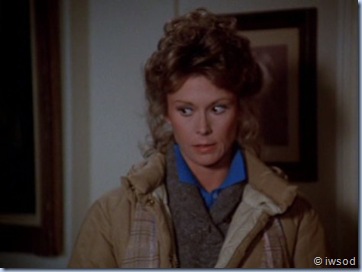 delivers it: He’s not asleep is he.

Lee just silently turns and looks at her

Amanda: he’s dead.
Lee: yeah, so is one lead we had as to who’s ripping 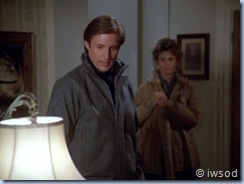 off our entire missile defence system. Well, how do you like the idea of America as a sitting duck.

Hey I am encouraged by the return of the less rude and abrupt Lee there as they visited Grainger! I know it doesn’t last though.. eek.. I’m trying to get through this episode as quickly as I can so I can forget about it (Dodge it!!)!! Anyone watched this episode recently?

15 responses to “3/5 Season One, Episode 17: The Artful Dodger-Scarecrow and Mrs King”