2/5 Season One, Episode 21:Waiting for Godorsky-Scarecrow and Mrs King

Before I get on with this episode I had to ask.. Is it my imagination or was the female assassin in the beginning wearing Leg warmers?! Ahhh the 80s!

On with the episode.. Amanda and Lee in the car on the way to deliver meatloaf are very cute! Meatloaf security guard Lee, seems more than willing to hear Amanda’s explanations for why she included certain information in her transcripts. Hmm maybe Amanda should include her reasoning for her interpretations in the transcripts in future! ( hey it’s a bit like writing a recap! haaa) .. This nice Lee is a lovely surprise! Love how Lee even includes a little teasing of Amanda! 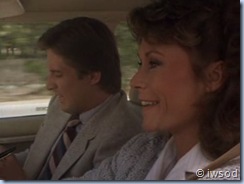 Lee: It makes sense.
Amanda: Well, I have a pretty logical mind. 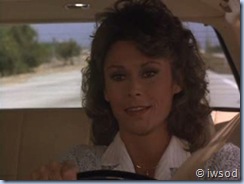 Lee: At one time or another. 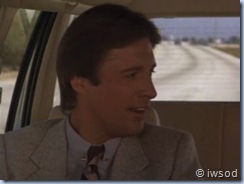 Love the look Amanda gives him!

I think she knows Lee is teasing here.. and so she doesn’t respond! I love how one moment, the road they 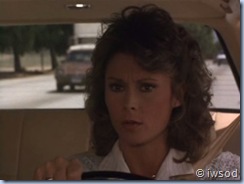 are driving on is virtually deserted and the next 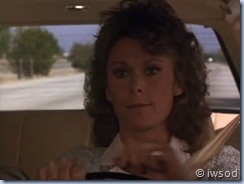 second it is swarming with cars LOL and in the 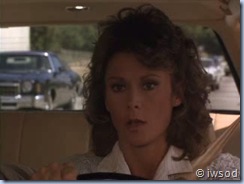 next second- they are gone again! whoooo! And then they are back again!! tee heee…Amanda has worked out they have a guy with bridgework,and an exercise freak: two people and one gun so far!
Lee answers her questions patiently explaining the wave scanner, Lee even tells Amanda about ‘Babak the spymaster’! (the way Lee says it it sounds like Babick.. weird..whatever!) whoooo.. apparently they used the wave scanner to eavesdrop on his conversations after receiving a tip Babak had imported some home grown assassins to do a job.. and Lee even tells Amanda she ‘may as well know what you is working on’!! (Even if it is National Security??!!! ) Oh my gosh!!! who is this Lee? I’m loving this Lee!! Such an improvement on Artful Dodger Lee.. Lee and Amanda seem closer in this ep would you say? Closer than in Charity Begins at home? Hmm.. I will keep that thought in the back of my mind while looking at these two episodes.

So Lee explains the current dilemma – they don’t know who the assassination target is!! Oh nooo!!! Now wait Lee! Why don’t you find out who Amanda is delivering her meatloaf to hmm?? Amanda is usually connected one way or another in smk land!

Nah that would be too easy.. better Lee stay clueless about this huge ongoing coincidence!
Amanda: Well, I hope my clues can be some help. I know they’re not really much. 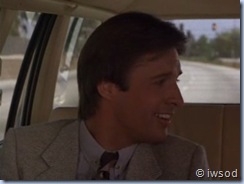 Lee: They are. And they’re all we’ve got.
Lee and Amanda arrive at the mansion.. and Lee is shocked at where Amanda’s ‘friend in need’ lives.. he seems more than happy to come along as meatloaf sherpa- I can’t get over how nice this 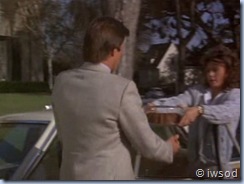 Lee is!! hehe- Oh I love that Amanda has also made a poppyseed cake- fab continuity!!
Amanda explains she can’t introduce Lee to this lady they are visiting as she doesn’t know her name.

Too funny! the butler answers the door and

asks who they are.. then closes it to ask after them, and Amanda turns to Lee and says ‘Isn’t it

nice she has a boarder, I was afraid she lived all alone. “..[What does that say about Lee? he lives all alone! but then I guess he is not ‘in need’…. much!] I think Lee is humouring her there with his “yeah..”

Just think, if the two assassins had turned up with a poppyseed cake and meatloaf? they would have had no trouble getting in touch with their target

She’s so accessible, it’s a little ridiculous that they have to rely on their inside man!

Can I just say.. What a cute couple these two

make??!!! hehehee.. Amanda is being her usual lovely self, and Lee seems to be enjoying Amanda’s company .. sorry I can’t get use to this!!! well, not yet!

Valoska: How nice to see you again, my dear.
Lee seems to recognise her with shock – he just knows everybody doesn’ t he!!

Amanda: Your Highness? Why should it be awkward if you didn’t know she is a princess? who cares I say.. it’ s not like they are attending an official function, and Amanda did pay her $10 bucks for a cameo

and cheesy. HA! but I wouldn’t have it any other way!

[What’s going on with the princess’ necklace here? it’s down her back here suddenly?! HA!] OhWait.. they are taking teasky with Princess Valoska? I thought only baddies drank tea in smksky! Uh oh.. there’s the bad guy Mikhail.. So arggghhhh that means that .. the princess is the assassination target?? but noooooo!!!! what are the odds huh? 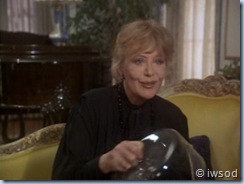 The princess compliments Amanda on the aroma of her poppyseed cake.. and I swear, Lee looks at Amanda as she says ‘you’re welcome’  and he looks proud of her!!! AWH!!

Why would Amanda recognise her, she’s not princess Diana!

but the princess is very gracious towards Amanda..
Valoska: Is something wrong?
Amanda: Well, I should have recognized you. I feel a little foolish bringing poppyseed cake and meat loaf to your house.
Valoska: An act of kindness is never foolish, 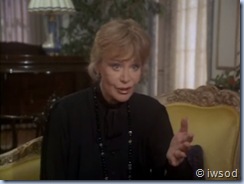 Amanda. [too right!] I may call you Amanda, right?
Amanda: Oh, yes, please do.
Valoska: And why should you recognize me? [Awesome!! I like this woman!!

I love how both Lee and Amanda seem a little

afraid of this question! I guess they figured they couldn’t turn around and say – yeah true! you are a nobody!

]
Amanda: Um. . . .
Lee: Well, your Highness, you do have a rather high profile in Washington. [yes, Lee recognises Everyone!!  Hey if she is so high profile, why didn’t Dotty recognise her? I would have thought she would be up on all the local royalty

Valoska: You mean I talk too much? ha..  You are wrong, young man. No. One can not talk too much when the subject is tyranny. The tyrants have taken my family, they have taken my home. They have not taken my voice. Never. They will never take my voice until I die. But who . . . who will fight after I’m gone? [considering what has happened to her, I think she’s quite restrained..]

Amanda: You have no other family?
Valoska: No. You know, I was never political until they were killed. Until I

was the last Valoska. Leonid Godorsky has a voice.
Lee: Yes, I understand he’s under house arrest.
Ok.. call me crazy but Lee is letting the princess know that he knows alot.. umm isn’t he kind of outing himself as being in the spy bizz by ‘knowing’ so much?
Valoska: He is too brave to silence and too well- 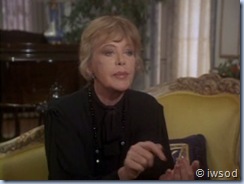 liked by the people to impress. Can you imagine what he could do here? Here in this country with freedom! With the help of my friends, he would be a force to reckon with!
Lee: Yes, but what chance would he have of getting

to the United States? [Lee borders on rude here IMO- couldn’t he have played dumb?! sometimes the ‘cool spy’ persona is a bit heavy handed..] He was the Nobel laureate for literature. His own government wouldn’t grant him a visa to accept the award.
Valoska: Money speaks all languages. It unlocks doors, it opens borders.

Amanda: So that’s the reason for the garage sale, to raise money for Mr Godorsky.
Valoska: Yes.
Amanda: Yeah.

Valoska: Oh, by the way, you were right, Amanda. The entry table was under priced. It went for four thousand. 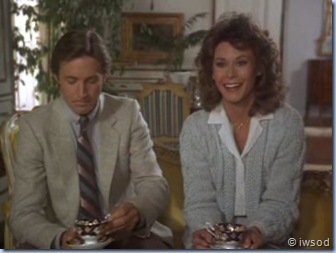 Amanda: Good. [whahahaahaa!]
The Princess tells Lee and Amanda she will see them at

1pm for a special lunch.. the lady doesn’t ask! and.. she leaves a stunned Amanda, and what seems to be an amused Lee behind.. Lee and Amanda exchange a look- Lee seems to give a ‘why not? let’s go!’ kind of look –

and then touches her arm to encourage her to leave.. I love it when he touches her!!!

They’re very comfortable and friendly with each other this episode….
Amanda: She didn’t even wait for an answer. That was more like a royal command than an invitation. What should we do?

Lee: Show up for lunch. I want to know what that important announcement is all about. I’ve got the feeling it’s trouble.
Ahh Lee and those ‘feelings’.. So they will be showing up for lunch.. lol.. I loved how the princess commanded them to be there and then just walked off- didn’t even see them to the door! Mind you, I thought she was pretty restrained considering Lee’s scepticism about something which clearly was something the was very passionate about.. then again, without challenging her- she may not have invited them I guess..but still a bit weird when she can see Lee is in the business, but has no idea who he is..  Not that it was wrong of Lee to enquire..but it could have been done with more finesse!

I’ll stop there.. more to come soon byeeeeeeeee! Feel free to share with us any feedback thoughts or insights!

26 responses to “2/5 Season One, Episode 21:Waiting for Godorsky-Scarecrow and Mrs King”