9/9 Season Two, Episode 1:To Catch a Mongoose-Scarecrow and Mrs King

Tag time!.. Looks like Lee is taking Amanda on a little sightseeing – taking her to see Buckingham Palace.. ( boy, there’s a fan fic right there!! bet someone has written Lee’s London sightseeing tour with Amanda

Amanda is admiring Buckingham palace almost like Lee brought her there to check her I mean it out! 😉

Amanda: I can’t believe it! I am actually here at Buckingham Palace! A royal residence.
[I love how Lee laughs at her excitement here, he actually throws back his head and laughs.. he is enjoying her company

]  Ohhh.. Fake social climbing Connie is back to say goodbye to Amanda (not Lee! ) he shows up- like they weren’t expecting him! ..Sooo how did he know where to find them? Wait.. maybe he really is the mongoose!!!! hehehehee..
Conrad: Amanda! Lee!
Amanda: Hi, Connie!
Lee: Conrad!
Conrad: Did you see the morning papers? [Yes 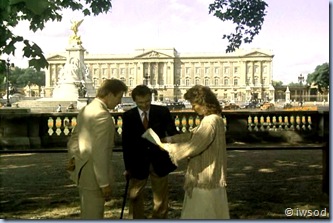 Connie, why not get straight to the point huh! tee heee..]

at the next class reunion. [thus, why Lee feels the need to show up also 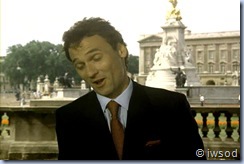 Conrad: Yeah, well, fame and success can only come to a few of us.

Hey, listen, I gotta run, I got a radio interview in a couple of minutes. You know, the British love their heroes. [Connie doesn’t give them a chance to get a word in here! LOL! Seems Connie is still happy to be someone else.. oh well.]
Connie continues : Lee? Hey, let’s work together again sometime,

what do you say? [LOL! too funny how Connie delivers this line.. yeah as if Connie is ever going to work with the American government again!! tee heee.. Err you were in trouble and the government rescued you!!!  As Lee would say they didn’t work on a case

together- he was the case

] Sooo funny Mr Smooth Connie actually winks at Lee as he delivers this line and holds out his hand to shake Lee’s hand!

Conrad has actually already turned away from Lee and moved on before Lee has a chance to respond or shake his hand..Connie has places to be Lee don’t go holding him up by responding! 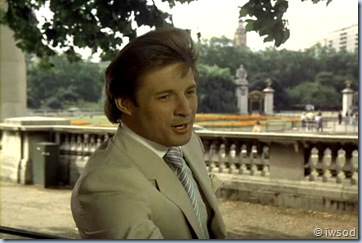 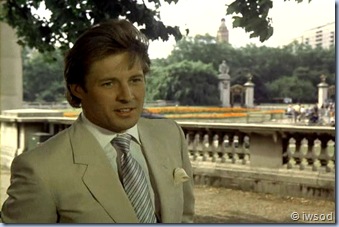 Lee seems to take a moment to realise he’s getting the brush off.. and his face when he sees Connie paying all his attention to Amanda?? Ah well Lee, all your heroics were just too much for Connie to deal with.. don’t worry!

I like that Connie calls Lee Pal! That is usually what bad cop Lee says!!

Lee saved Connie from the mongoose- but.. did he say sorry for calling Connie a creep??!! rofl! hehehee.. 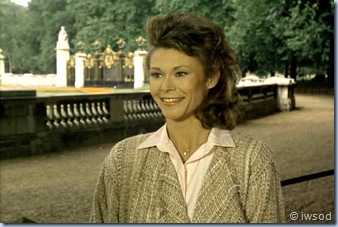 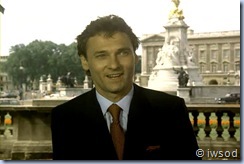 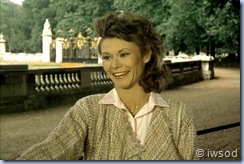 Connie. Amanda reaches out and fixes Connie’s tie in a show of affection 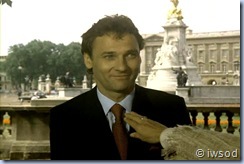 ( Just like she did outside Harrods!) Fix your tie, Conrad… [Connie 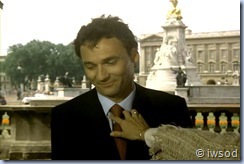 acts all bashful! Lee? Hmm we could say it is jealousy.. or he is uncomfortable at again seeing an intimate moment between these two- for once- I say it is definitely Jealousy 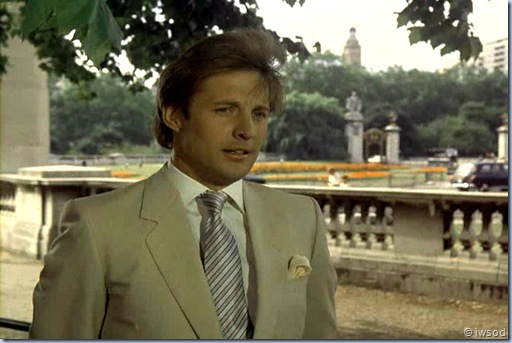 This is the expression on his face in the first frame after seeing the affection between Connie and Amanda. He then seems to catch himself and calm himself down a little..

Amanda: Bye.
Conrad recovers from his sheepishness.. suddenly remembering he is a celebrity now!!-

which means he moves faster! and talks louder! and doesn’t have time to get all bashful over Amanda fixing his tie!! 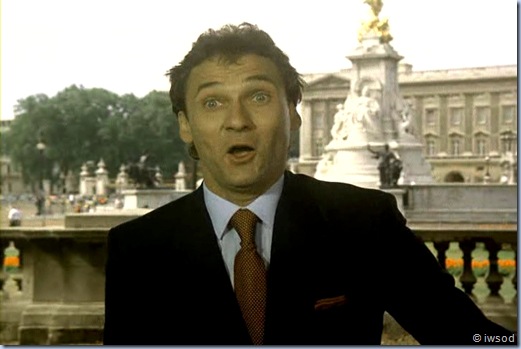 And without further ado.. Off Connie Beth rushes to go and make something of his life, maybe try and use his new found celebrity to become a golden circle girl.. and hey, more power to him! oh wait.. something just isn’t right here..

Oh well 😉 Doesn’t Lee look happy when Connie Beth leaves!!!! Love how Lee lets out a loud chuckle at Connie as he takes off!
Amanda: Bless his heart, he’s about to bust. [that’s one way of putting it! ] 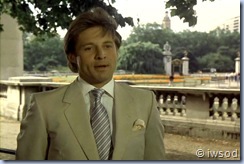 Lee continues: Uh, look, Amanda. You have all afternoon before your flight.

Amanda: Mmmhmm.
Lee: What are you going to do?

Amanda: Well, this may sound silly, but I’ve always promised myself that if I ever got to England, I would have a formal, proper afternoon British tea.

Lee: Well, that’s a good idea. There are some very famous, very posh places, you know.

Amanda: Oh, well, no, I think you have to know someone to get into those places.

I do have a little influence, you know, even here.

Ahhh fix it Lee!! He might not be doing radio interviews.. but he knows people

Here goes Lee once again – doing something nice for Amanda to say thankyou to her, show his appreciation and make it up to her

!! and Amanda didn’t seem to 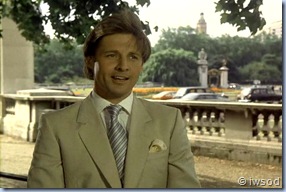 see this one coming!

Lee surprises her! Love how Lee doesn’t look bashful as he makes this offer- but he can’t quite make eye contact with her!!! squeeee.. 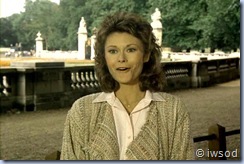 Amanda: Oh, Lee! Would you really do that?

We switch to the wide shot and see Lee take a step towards Amanda, taking both her arms in his hands.. 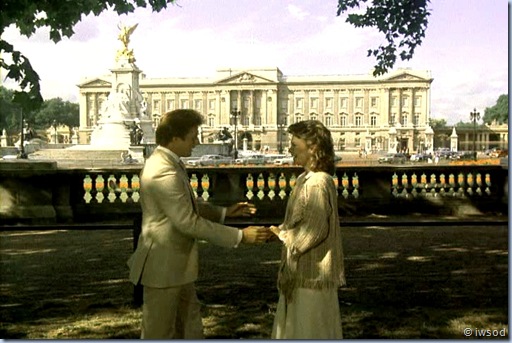 Lee: Anywhere you want, [Amanda looks down at his hands and then back at him-

what’s he up to Amanda?? Lee’s hot and c

…Just name the place and I’ll take you there.
-whoa.. I’ve had dreams of Lee saying that to me!!! I am sure Amanda must think she is dreaming!!!! 🙂

Our Amanda though is a strong woman!

(Amanda’s my hero!) She gains control of her thought processes here and gets Lee good! She manages to put Lee at ease(because she doesn’t freak out, or treat this as a come on!), and keeps things between them light and fun

Our Amanda is a very clever woman!!

Amanda(straightfaced): I’d like to have tea there, at the palace…[love how Amanda tries not to laugh

here! and Lee looks concerned! He wanted to do something nice for her! but..not even Lee can organise that! 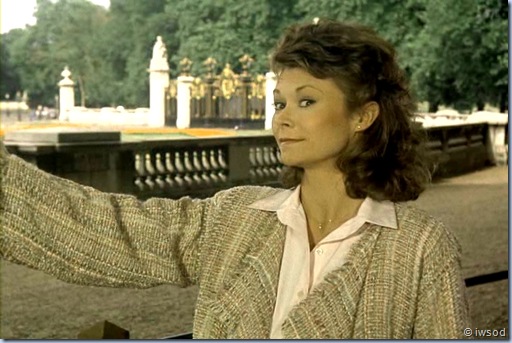 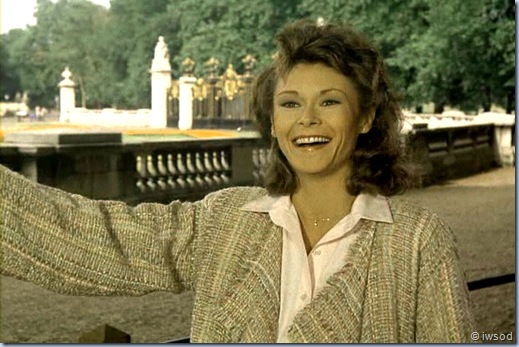 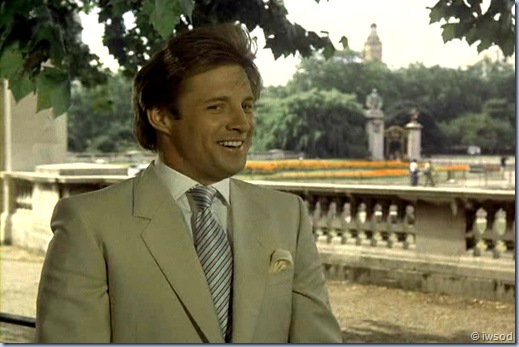 The end!
Hey just think in a few years time Lee will be saying ‘why you!!!’ to Amanda while tickling her in the Q bureau and being busted by Francine..Whoo hoo! Happy days are ahead

Ok, there has got to be dozens of fan fics of Lee and Amanda having high tea! (actually I haven’t read the tagalogue.. does it mention it? If anyone can recommend a good one.. go for it!

Also, it may be my imagination, but it seems to me that whenever Lee steps closer to Amanda, and takes both her arms in his hands like that- he has her full attention, she stops talking and she will pretty much do whatever he wants

Even though I am not of the opinion that at this point Amanda is totally in love with Lee – she is well aware of how gorgeous he is, how attractive he is to her (but there is no future in it and that’s  never going to happen! thinks Amanda at this point IMHO).. he is a good person underneath it all

and he is at the very least- her friend

You know what, given this episode is set in

England, you would think there would be a tea sipping baddie in there somewhere but nope!

I do think though that the acting was very well done in this episode.. The transformation in Connie from evil mastermind to simpering wimp was spectacular, funny and very well done – and mirrored very cleverly by the mongoose – who went from lovely random old guy at the casino helping Amanda win lots of money, to a very nasty piece of work who I didn’t doubt would

have killed Amanda the moment he had finished with using her! Very well done!!

Before I finish this post, I’d just like to add my biggest thanks to Claudia– who has transcribed all of season 1 by herself (and a few of the early season 2 episodes) and kindly made her transcripts available online –[see smk-land for the links] Claudia all your hard work has made my posting so much dialogue a lot easier – so thank you very much for sharing your hard work!!
Claudia: We Salute You !!

Maybe now is a good time mention, that there is still much to be done in getting all of Scarecrow and Mrs King transcribed and available on the net..

If you are looking for a way to join in the fun, and contribute to SMK fandom, transcribing could be for you! Blogs like mine are only possible because of the resources we have access to.. Fan Fiction  research, non-English speaking viewers ( and english speaking) all benefit from having access to transcripts.

If you would like to have a go transcribing an episode, there is a project underway at the moment called: Operation Sandstorm. ( yes named after the operation we find out Amanda destroyed in the episode double agent) It has been underway for a year or so now, and slowly but surely smk fans will- together- get through all the episodes! It might take a few years- but that’s ok!

it is not work! It is SMK and suppose to be fun!

If this interests you and you would like to find out more follow this link to see what episodes are awaiting transcription :
http://scarecrowandmrskingforum.yuku.com/topic/1872/Operation-Sandstorm-SMK-Transcripts-Project

All the transcripts are hosted on Petra’s website. I have been in touch with Petra and she has said she would love to have more volunteers to transcribe and check transcriptions! (Many hands make short work..) So if you are interested: visit the Yuku forum (by following the link), or get in touch with Petra on her website.

I know when I don’t have access to transcripts, I can’t include the amount of dialogue I have been including, it is just too time consuming for me.. so thanks again Claudia!! You’re a star!!

Byeee everyone.. thanks for stopping by and reading and commenting.. I wouldn’t be able to do this blog without you either!

16 responses to “9/9 Season Two, Episode 1:To Catch a Mongoose-Scarecrow and Mrs King”