8/10 Season Two, Episode 7: Our Man in Tegernsee-Scarecrow and Mrs King

Duh duh duuuhhhhh!!!!!! We pick up the episode with Harry’s reveal: he is indeed Dirty!! 🙂
Dirty Harry: We have to kill him! (ie. Lee)
Okay- I really don’t like this guy!!!
Is it my imagination or does Harry suddenly have a bit of a southern accent when talking to the baddies?!
Turns out, Harry approached the baddies and made them an offer- for $$  he would keep the authorities from finding them out.. but with Lee getting closer now Harry is saying he needs help with killing Lee..

No wonder the baddies are mad at Harry! He insinuates himself into their operation, then asks them for their help to fix a problem he is being paid to fix? I have no sympathy for ya Harry..
Harry: Are you going to stand around insulting me 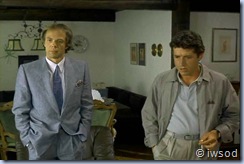 Portillo or do you want to know what kind of trouble we’re in? Now scarecrow is the best operative I’ve ever worked with! He is tough and he is smart, and this tap dance I’ve been doing is wearing real thin [I agree!! I love that he says this!! 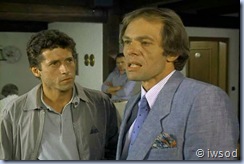 Portillo the baddie from Paraguay: I’d say you disappoint me Harry, but that would imply respect. [ Now that right there is Shakespeare!!!

LOL… Portillo is disgusted at all the greedy men he has to deal with.. hey you want to sell counterfeit $$ to fund your neo nazis in Paraguay? you’ve got to expect to deal with some greedy people with no scruples! boooo hoooo ]

Harry: well you’ll excuse me if I don’t lose any sleep over what some neo-nazi thinks of me. [-but does he lose sleep over what Lee or Amanda thinks of him? what do you think? I’m leaning towards: no! He especially doesn’t care what a neo-nazi with a pretty floral handkerchief in his lapel pocket thinks! tee heee.. ] Harry doesn’t share in Portillo’s facist beliefs.. he’s just greedy.. uh oh.. he wants Lee taken out..
Portillo: and what about the woman?
Harry: I’ll take care of her. [what does that mean?? was he actually going to take care of her?? (maintain his cover and help her out of the country after Lee’s death?)  or take care of her?? ( kill her??? ) eek!! I don’t remember.. ] believe it or not Portillo, I have a plan.

We see Lee and Amanda returning to Tegernsee to meet up again with Harry where they last went their separate ways an hour ago.. [ For those of you who

enjoy this kind of thing.. check out the town clock in Tegernsee! They said bye to Harry at 1215pm.. and now they are returning to meet Harry at their planned 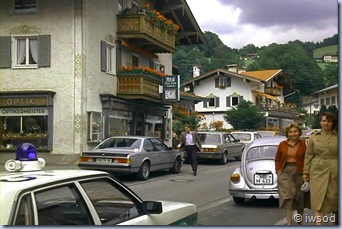 reunion one hour later? they park in front of the clock, and it’s 1205pm

ahhh these things crack me up! Lee and Amanda must have asked some magical questions in Bad Tolz!!]

Lee walks around and opens Amanda’s door for her!!! Does he usually do that? He even offers her a hand to help her out of the car! Does the man not realise that he is subconsciously wooing this lady?!!!!

Amanda: I bet there’s a telephone around here somewhere.
Lee: yeah there probably is.
Amanda: well we have a few minutes.

Lee: for what?
Amanda: well I’d like to call my mother, the connection last night from Harry’s house was terrible, I don’t think she understood a word I said.
Lee: why don’t you count yourself lucky, forget about it.
Amanda: Lee, I cannot just forget about it. I want my mother to

know that I was arrested. 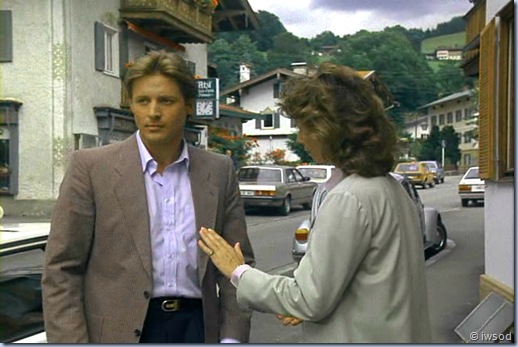 Now I know you may not agree with me..

Lee: No.
Amanda: but it could have happened to anybody and I don’t want her to think that I’m over here just having a high heeled good time.

Lee: Haa..what’s wrong with that?
Amanda: It’s not the truth 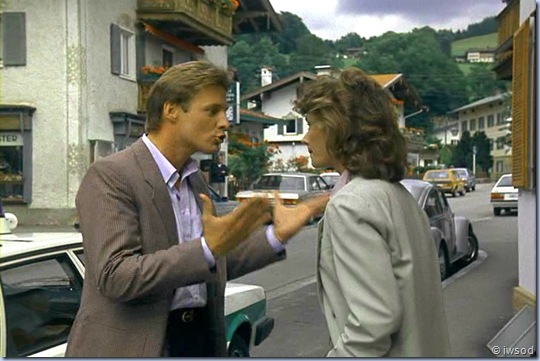 Amanda: Now I know you don’t mean that  [man this line is hard to hear!!! Thank heavens for access to the script and the official dvds!!!! I think there are a few mumbled lines in this episode..]
Lee: Do you want her to worry? [Lee tries a new tactic!

She was right.. he didn’t mean that!

]
Amanda: No of course not.

Lee: are the kids alright?
Amanda: yes they’re fine  [Amanda is cranky with Lee for trying this tactic IMHO! She starts walking..]

Lee: well..
Amanda: Well?
Lee: So?! [This line always felt very random to me.. checking the script I think adds credence to my suspicions – that this is BB not knowing the next line and filling in till he can remember it!! This so/ so what exchange is non existent in the script.. and is not typical.. but they do a great job of keeping the scene moving don’t they!! ]

Look, you’re a good mother, you love your family, you’re a responsible person.  [Love how he says this so fast!!! ] 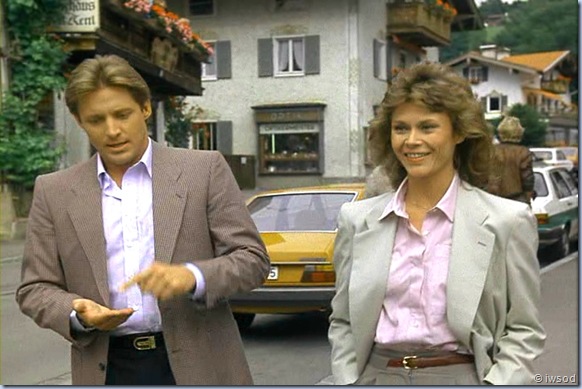 Lee: yeah, in certain areas that is……
Amanda cuts in : but that was very underhanded.  [whahahhhaaaaa!!!] 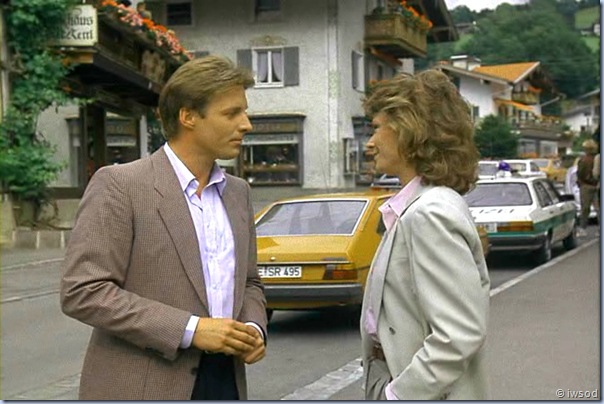 [This last line is not in the script – I wonder if it was an ad-lib – I LOVE it!!!! It’s funny!! and.. It rescues Amanda from being a sucker.. and portrays Amanda as Lee’s equal!

Which I always love to see!!

] You see Lee’s expression change when she said that? he thought he had her.. haaa!!!
Harry interrupts them by calling out to them from across the street: Lee!
Drat Harry for interrupting them!! He really is EVIL!!!!

Dirty Harry  tells them about his lead.. and he doesn’t even ask about their lead.. so Lee just tells him.. you can see Lee and Amanda find his behaviour strange here..

When Harry says : I have got a terrific lead.
Lee replies: so have I. [while Amanda is signaling that together they have a lead not ‘I’!]

Lee is acknowledging Amanda is a good responsible mother.. but the acknowledgement of her work? Isn’t quite there yet! Small steps forward! 😉

Poor Amanda.. this is soooo typical early Lee.. Amanda is not his partner, this is not her case it is his..She IS the case!  and it is His lead.. pha!  Come on Lee.. have you forgotten that Brunettes are in!!

Lee explains that Mueller has been seen frequently visiting with Karl Portillo from Paraguay at his chalet in Tegernsee.. there’s a lead!! but.. Harry is of course not interested in pursuing this lead just yet ( raising suspicions! come on Harry- everyone knows there

is a large neo-nazi movement in Paraguay! –or at least Lee knows.. he knows everything!! plates are of Nazi origin? join the dots Harry!!  ) Harry instead wants to pursue his lead: Mueller’s cousin runs a sawmill on the outskirts of munich [ yeah.. a nice secluded location.. uhh huuhh.. Harry’s lead is pathetic.. Mueller has been spending lots of time with his cousin? ohhh that is sooo suspicious!! Much more suspicious than neo-nazis!!!

Lee goes very quiet..I don’t think I thought Lee was suspicious here the first time I saw this.. but it is clear both he and Amanda are confused by Harry’s behaviour here.. but.. now I know Harry is dirty and when Lee began to suspect Harry (from previous viewings) – it appears Lee acquiesces very quickly to following Harry’s lame lead rather than their very promising lead.. too quickly!

Do you think Amanda is suspicious? I’m not sure..

Anyway, Lee calmly says he just wants to check in with Billy –

convincing Lee!! I imagine this is where he calls for help.. only we don’t know it yet.. Tell Billy you’ve got a good lead but fill in the details later? Oh Harry – that does scream I’m a baddie! Don’t tell Billy you are following my lead straight into my trap!!

Amanda to Harry: you really think we could have this whole thing wrapped up in one day? 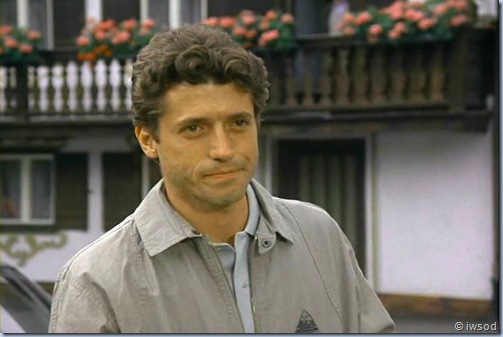 Harry: There’s not a doubt in my mind.
[GRRR!!! You wait Harry! Lee is going to sock you one!! This sure is personal!!]

At this, Amanda shrugs.. and smiles.. pushing aside her concerns I guess..

Well I shall leave it there for now..

As always I’d love to hear any feedback, questions, thoughts, insights anything!! Any suggestions for my blog? or the posts? I’m always open to hearing ideas..
I’m just another smk fan looking for other smk fans to enjoy the show with – so feel free to comment and share your own ideas or just say hello

11 responses to “8/10 Season Two, Episode 7: Our Man in Tegernsee-Scarecrow and Mrs King”