Time to Party!!! Ahhh Compson has snuck into the party having found himself a tuxedo..where is his camera?

Lord B, Lee and Amanda arrive.. Gwyneth joins them wondering where they’ve been.. apparently Lord B likes to avoid the crowds, and sneak out for a cigar.. fair enough..I guess.. this entertaining wasn’t his idea. though, maybe not very supportive of his wife. hmm

Hmm what do you think of Lady B’s outfit? A brave and surprising choice IMO.. Looks a bit YSL to me.. considering all the drab 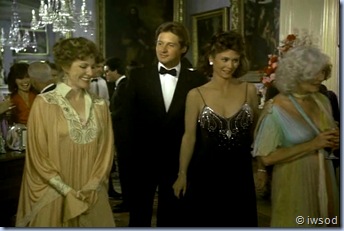 grays and outfits Lady B has been wearing – this is a nice change!
Lady B remarks that she is sorry she couldn’t cancel the party at such short notice, and she hopes Lee is feeling alright.

Lee responds: No no no, I’m feeling fine, Lady Bromfield. Really. I was very lucky. 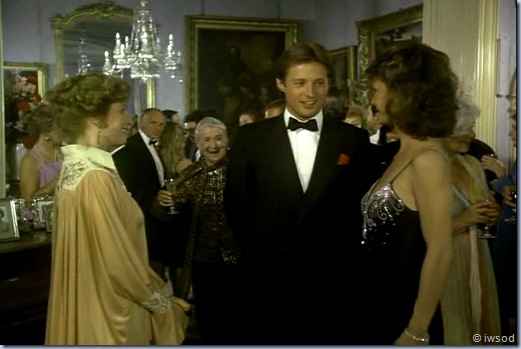 well well well.. as Lee says ‘ I was very lucky’ he looks at Amanda and smiles.. so far I think that’s as close as we’ve gotten to Lee being nice to Amanda without trying to manipulate her in someway.. 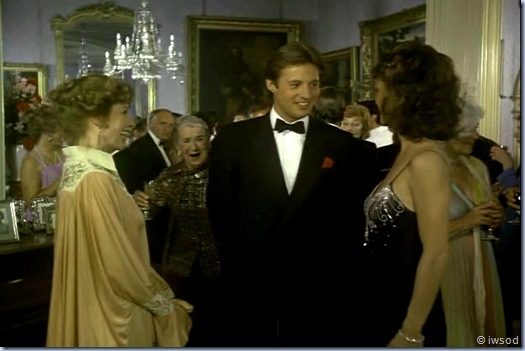 That is like water in the desert – and said with a smile and in a tux no less!!!!

Yes Lee you are very very lucky – to have Amanda!!! Even if you can’t yet admit it! [it isn’t too long before he does though thank goodness!]
Uh oh.. here comes Lady AnnoyingWitheringspoon..
Now I really don’t like her.. she interrupts Lee’s almost thank you to Amanda for saving his life!

Lady W: My dear, I’ve been looking simply everywhere for you..because I do want to find out what happened. I mean, how did you ever come to be in that position?
At this, Lee spots Compson.. who is standing behind him watching him.. If I didn’t know better – I’d say he wants to be seen.. and he wants Lee to chase him..
Compson takes off, Lee follows LOL!  without a word other than: Compson! [he’s so singleminded with his work.. completely ignoring Lady B and Lady W!]
Lady W continues: Now do tell me, I’m sure it’s time you can tell me something.

Amanda simply responds: it’s Compson.. I… And she leaves also.. tee hee.. The ladies are left confused! tee heee..
Lady W: Compson??????!!! Who’s Compson???
We see Compson run through the hall of weapons with Lee close behind him…
Amanda walks behind – and notices one of the pikes  is missing.. Uhhh Ohhhh!!

We see Compson running through the garden, with Lee still in pursuit.. This is quite a long sequence here in the garden.. it goes for three minutes!! Three 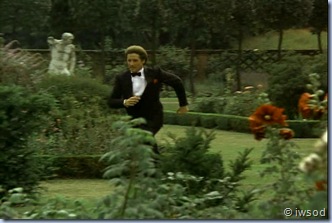 minutes of no dialogue, and cat and mouse in the garden maze.. my goodness.. the music is pretty good though.. and well who could complain about more 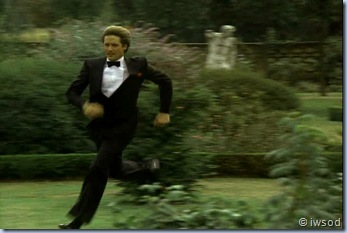 of Lee in the great outdoors in his tuxedo?? This is the stuff of dreams don’t you think? Only.. he is usually running towards me, and carrying flowers.. err not chasing a man whom he thinks may have tried to kill him!

hehehhee..Not far behind them, Amanda is on their trail also..
Uh oh.. Compson runs for the maze.. and Lee is going to have to follow him in there.. 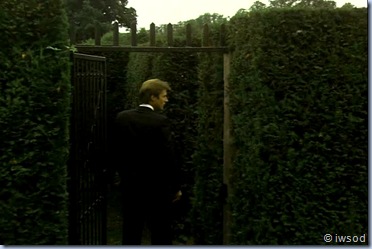 Gorgeous though isn’t it! ( Lee in a tux, and the maze!

)… Lots of danger music.. and stealthy moving around the maze… The pike could plunge out from a hedge at any moment!!! Amanda enters the

maze also.. she is really putting herself in danger here.. She could have just yelled out to Lee that there is a pike missing – but she can’t help herself.. she’s got to follow Lee!

Uh oh.. we see the baddie (well, we see his shoes!

) is in there.. holding the pike and ready to strike..
Lots of worried looking Lee wandering the maze and finding no one..

Cool camera angle!! You can juuuust make out Amanda on the left, Lee in the middle and Compson on the right.. but no sign of  the baddie.. Finally.. Compson lunges at Lee from behind.. they wrestle a little, and the pike goes through the hedge and stabs Compson in the back.. Ouchies..

As Compson slumps to the ground, Amanda rounds the corner.. 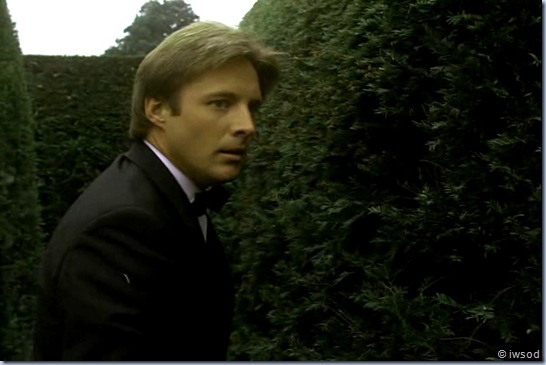 Do you think they are wanting us to think that Amanda may think for a moment that it was Lee that stabbed Compson? 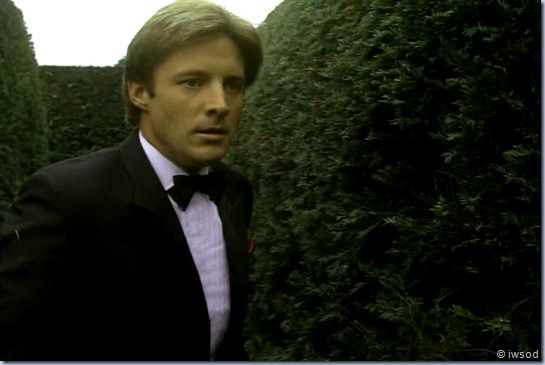 You know, I think Compson lured Lee out to the garden on purpose.. but was he working with the baddies? Or was this his own initiative? [and he was anonymously tipped off to photo opportunities?] How did the baddie follow them down to the maze? and know to take the pike? It’s like Compson lead Lee down there and it was all set up ready to go.. but.. then why did Compson wrestle with Lee? why didn’t he just stay out of the way? I thought maybe Compson lured Lee down there for a fight- to teach Lee a lesson.. but then that doesn’t explain how the baddie could have gone unseen by anyone when following them, or been waiting for them to come to the maze? It isn’t really explained is it? maybe later in the episode it will I don’t remember.. Thoughts anyone?

Anyway, Back to London and Scotland Yard!.. Inspector Keaton! Hello again!! A big

hooray for continuity!! I enjoyed him in To catch a mongoose.. Only, this time Lee is a suspect for… Murder! 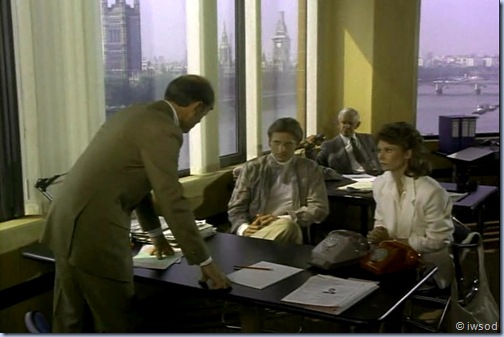 drat) and ugh.. Lee has put on his white turtleneck again.. [At least I know some of you are enjoying it – even if I’m not !!

] only now he has teamed it up with a ghastly jacket.. Ok.. I will try not to focus on it!!! But Amanda? she has changed into a new outfit and is looking gorgeous!!! I guess the party was a midday thing? a tuxedo at midday??? ohhhh whatever.. I can’t get the time straight in this episode.. anyone else confused?!
Amanda is in full protective mode of Lee here, Lee tries to get her to stop but she seems determined so he lets her have her say..

since he is being accused.. and she is going all out to support him 100%..

Amanda: Mr Stetson may have a temper, and he Blows Up!! 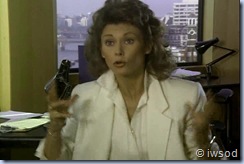 ( LOL!! the look Lee gives Amanda when she does this!! tee hee –Amanda! are you trying to put me away for life?! )

Amanda continues: … but it blows over [eventually!] . And he’s not violent or irresponsible and and I really think that it should go on the record that he was angry ( ohhh dear!!) because Mr

Compson published the story and the photograph about Lord Bromfield and myself and it wasn’t true. I was angry and Lord Bromfield was angry, but we didn’t kill him.
Here is that theme again – Amanda wanting to set things straight with the truth, but it doesn’t help because things appear to be different to what the truth is.. Hmm.. 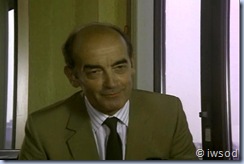 Inspector Keaton: somebody did madam.

Amanda: but it wasn’t Mr Stetson sir.
Lee: Amanda!
Amanda: yes?
Lee: Inspector Keaton didn’t say I killed him, he said I had a motive. Which you’ve just confirmed. 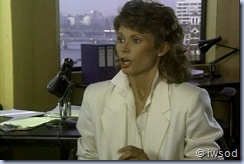 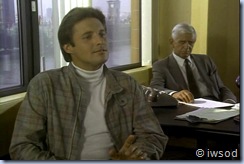 Amanda goes to interject but Lee holds up his hand to silence her. He’s not angry with her which is great, but.. he can see it is wise for her to quit talking!
Lee continues: Now please, be quiet.

Knock me over with a feather.. Lee is actually being quite nice to Amanda here.. Yes I’m a bit grumpy with Lee this episode!

Notice Lee.. when you say please, and are nice to her – she responds! [I love that about Amanda!!] 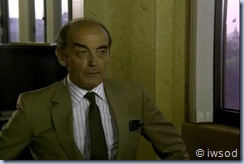 Inspector Keaton: Thank you Mr Stetson. Mr Newhouse ( who is sitting behind Lee and Amanda, and I am assuming he is MI5?) has told me about your investigation.

Newhouse: we cannot have that compromised Keaton. There is too much at stake here. Our man Ransome ( yep MI5!) has already paid with his life.
ROFL!!! as Newhouse talks.. you can see Amanda in the foreground mouthing something to Lee here..

I think she says something about getting him in trouble.. Lee mouthes to Amanda to keep quiet.. and Amanda mouthes back she’s sorry..

[what do you guys think?  Any fab lip readers out there??!! such a coupley thing to do!!!  I love that Lee doesn’t loose his temper with Amanda here – LOL I guess if he did loose his temper at all here, Keaton might be keen to arrest him for his temper- and how he took it out on  Compson! but a very cute Lee/Amanda moment..  ]
Keaton responds to Newhouse: Granted. However, one cannot ignore the fact of Mr Compson’s death.
Lee: well for the moment you can mark it down as accidental.
Keaton: A pike driven through the back is hardly accidental Mr Stetson. 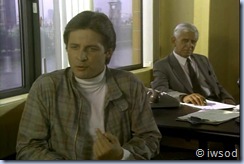 Lee: Yes. We know that this sex scandal incident was a setup. [Hooray Lee is finally getting that brain in gear! Must be all that

Newhouse: Lord Bromfield is undersecretary at the foreign office. As liason with the intelligence community he’s privy to a great deal.
Amanda: but why would Lord Bromfield try to kill anyone at his own home?
Lee: I don’t think he would. There’s Errol Pridemore, MI5 and Geoffrey Douglas-Wood, whoever the hell he is. [rofl! we don’t hear Lee say that very often! Lee knows everyone!

]
Newhouse: Ohh I’ve already run him. We’ve nothing on him, except a very active social calendar. Nothing on any of the other guests either.
Lee: great.

Keaton says he can delay investigating Compson’s death by 24 hours.. how does Lee respond – thank you?? teee heee. no!
Lee nods responds: Mmm!

Lee isn’t sure what his next move will be.. only that the game is back at Bromfield Hall – so suddenly he is super keen to be back there! how ironic..

This scene ends here.. so I shall finish up for the moment.. As always.. feel free to have some input here and share your thoughts – thanks for reading and bye for now!