Back to the bowling alley, and Yuri has put Amanda under hypnosis again.. Hooray! we are sparred the head

flop and the cringeworthy typing motions! She doesn’t do it at all this time!

And.. bonus! We still get to

We learn the baddies’ hideout has a lead lining, 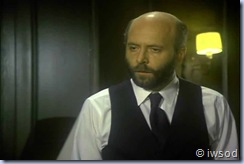 and that it reminds Barkhov of when his mother died- because it is cold and dark. It is somewhere that amuses Kreschenko. And.. Barkhov and Ulanovsky discuss the radiation- confirming their suspicions of a nuclear bomb.

As the hypnosis is coming to an end, there is a knock at the door. Lee quietly opens it, and motions to Francine and the two agents with her to enter quietly.

Francine takes it all in looking confused and cranky! Just what is going on! Ugh.. one final head flop! and Amanda is out of her trance!
Amanda turns to see Francine making her way into the room: Oh, Hello Francine. When did you get here?

Francine: a little late obviously. What’s this all about?

Lee: well- ( Yuri puts his hand in his vest to pull something out and one of the male agents grabs his arm thinking he is pulling a gun. He is really pulling out the dosimeter- Francine points her gun at Yuri..)

Lee: whoa whoa! [Why is it so funny how Francine is pointing the gun at Yuri? the look on her face? the way she’s holding the gun? maybe a combination! haaaa!]Yuri: It’s a dosimeter.
Francine: and this is a pistol. Put yours on the table, Lee. [whahahaaaaaa!!!!! Francine is so funny here!!] 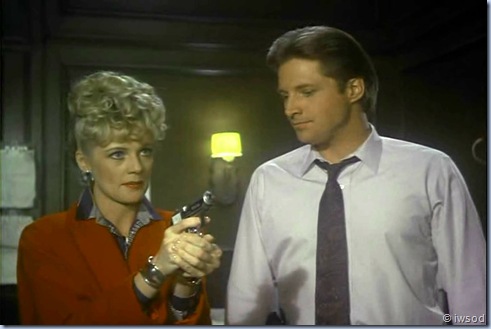 Amanda: Francine what are you doing? 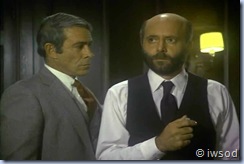 Francine: no, not a whole lot.
Amanda: Oh! But Francine, they’re working together!

Francine: fascinating. I can’t wait to hear the explanation. 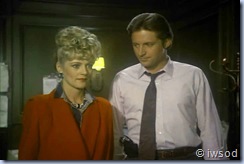 Amanda to Francine : excuse me ( Amanda turns to Lee) but I have to know something, Lee what’s gonna happen with that nuclear bomb? 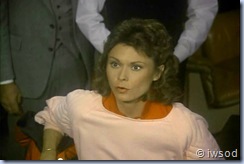 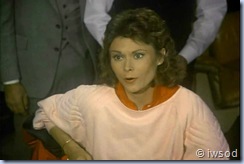 Amanda: ah um because if it’s gonna go off, I need to know.
Lee: My guess is Kreschenko’s going to detonate it, not unless we can stop him first.

You know what I love about this? They basically ignore Francine!

Francine: Lee! I want to know what’s going on here!
Amanda: yeah and I’d like to go home. 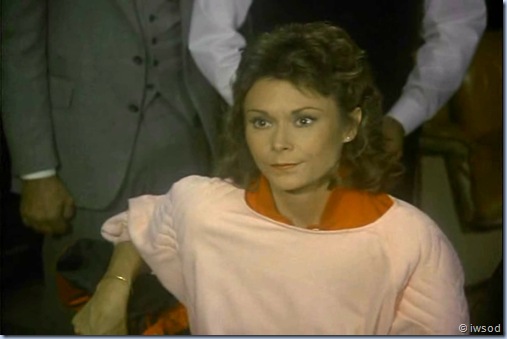 Lee to Amanda: I know. That’s no problem. 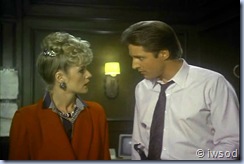 ( to Francine) You’ve gotta get ahold of Billy. We need those Barhov-Ulanovsky tapes.
Francine shakes her head: nooo there are no more tapes.
Lee: what?
Francine: somehow, somebody erased everything that we have on Kreschenko. [The script says this is what triggered operation possum, not Billy’s kidnapping.. interesting!] 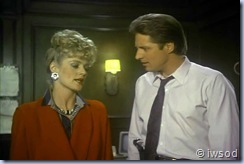 Amanda: so all you have is what I remember under hypnosis…

Lee, if I could just get mother and the boys on the train

to Vermont I could come back in the morning.
Lee pauses a moment..Francine is silent. Finally Lee responds: Go!

Francine: No!! She stays!!
Lee at the same time to Amanda: Go!

Francine sighs, looks away for a moment, then looks back resigned and says: Go on!

Love it!! Go Lee!!! Lee standing up to Francine- on behalf of Amanda and her needs??!! Ohh how far we have come!!

Lee turns to Amanda and gives her a little smile now she can go- oh my gosh!! that is so swoon worthy right there!!! Amanda nods and leaves.

Lee lets out a huge breath he had been holding. [yeah! that was close – he almost had to tackle Francine so Amanda could go! haaa!

This moment raises an interesting issue! Just who is in charge? Maybe Kreschenko is right!

LOL! I think Francine is suppose to be in charge.. as Lee isn’t ‘in’ yet – but .. when is he considered ‘in’? and.. if he is, is Francine still in charge? It raises interesting questions! and well, it all just goes to show – Lee really does just do whatever he wants – it doesn’t matter who is in charge haaaaa!

I love that Lee makes it clear that – it is Amanda- this is different!!!! Swooon!!!

Amanda is different.. so she can go they don’t have to worry.

I think Francine says okay because it was Lee making the point – and he probably would have fought her on it – he was going to let Amanda go no matter what IMHO- I don’t think Francine cares whether or not it’s Amanda! but that’s just my hunch.. What do you think? do tell!!!

Lee tells them all to sit down, and he’ll fill them in on where they are at.

[Love how the guns are just sitting on the table there.. guess Lee can help himself to his gun again? LOL! is he ‘in’ or not??!!]

Back to Amanda’s the next morning..
Amanda’s serving up the boy’s breakfasts and getting them moving, they are all dressed. Dotty isn’t

moving quiet as fast though!  She arrives in the kitchen in her dressing gown.. Amanda explains there’s a slight change of plans!:  I just spoke to Uncle Herman and you’re all going to Vermont this morning on the early train.
Dotty: I don’t want to go. I wanna go back to bed. As soon as I found out what’s happened to that mind of 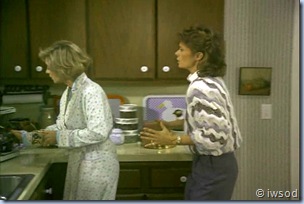 yours. ( Dotty prepares herself a cup of coffee)
Amanda: Mother, you trust me don’t you?
Dotty: of course.
Amanda: the train leaves in an hour, you have to be

on it. I’ll follow you as soon as I can.
Dotty: Amanda, could I change my answer to that trust question you just asked? I am not budging until I get an explanation.

Amanda leads Dotty away from the boys so they can’t hear. Amanda takes a deep breath..

And it’s gonna go off unless

we find a man named Kreschenko. 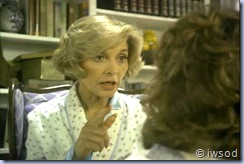 Meaning you and the other spies that you work with?

…I would go with you to Vermont, except that I have- 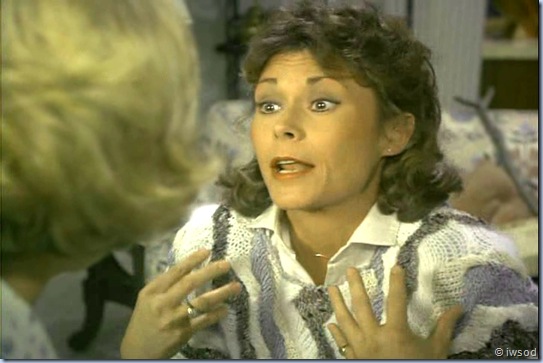 At exactly the same time Dotty and Amanda say very fast and identically: vital information that the other spies need in order to find the bomb.

This is brilliant!!! So clever!! so funny!! so well acted! I love it!! and it plays on that old gag about Amanda being the only one that can help –remember they mentioned this as a joke before – in Charity begins at home?? Remember?: Amanda: I’m your only hope!
Amanda: Whole operation depends on me! 😆

Anyway, back to this episode! It gets even weirder for Dotty! LOL!!
Amanda: that’s right mother… 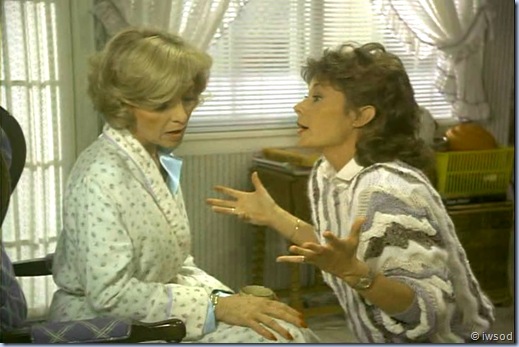 …it only comes out under hypnosis.
Dotty sighs: Amanda, you did this as a child. You

would tell absurd stories when you wanted something. Once it was a bicycle… so that the dragons wouldn’t catch you on the way home from school.
Amanda says at the same time: this isn’t like the dragons  [Aie! Does this drive anyone else nuts? How Dotty seems to think Amanda is the same as she was when she was little??]

Dotty: if you really have a viable reason for me and the boys to leave at the crack of dawn then all you have to do is tell me, but,

darling, don’t lie to me. [The script has Dotty thinking Amanda wants them out of the way so she can have an affair!

interesting that they skipped that!]
Amanda: mother… please.
Dotty: That’s all you have to say. [So says Ms ‘I am not budging until I get an explanation.’  ugh! Amanda has the patience of a saint!]

Amanda smiles: thank you!
Dotty gets up and heads upstairs to dress saying: spies!

… Boys! Are you eating? How about some more potatoes? Jamie: No thank you 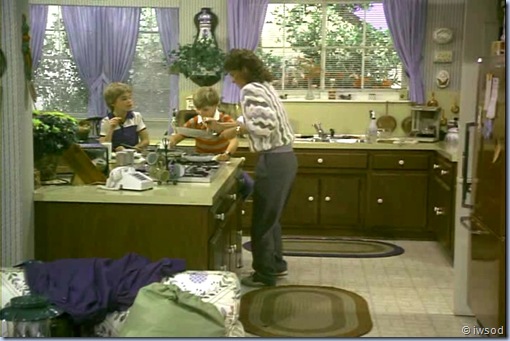 I had forgotten that Amanda tells her mother that she is a spy!! And- Dotty just won’t believe her!! (What was it Lee said in Dead Ringer about Dotty being curious about Magda? ‘tell her the truth – she won’t believe you!‘ ) You do wonder though why, with all the strange things that happen, why doesn’t Dotty ever think back to this moment.. and formulate one of her theories – that maybe just maybe Amanda really was telling the truth!

[I always thought that about the season 4 ep ‘Any number can play’!] I guess it’s just too impossible for Dotty! I wonder what it would have been like had Dotty ever found out.. we can only imagine..

That jumper Amanda is wearing – that is worn in a few promotional photos –I’ll try and find some! I think it is awful! Looks like a man’s jumper! but… that was the fashion of the times! And I prefer Amanda in big fluffy jumpers to Lee! 😉 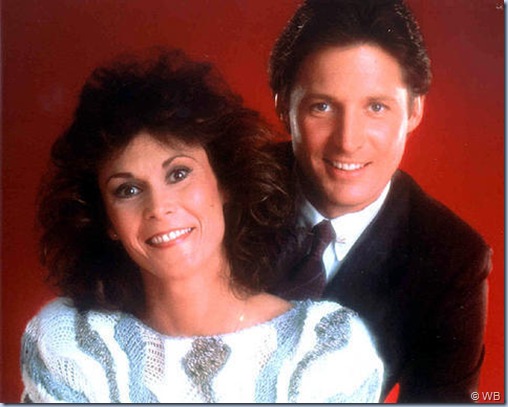 I found a couple.. Amanda’s hair is looking very frazzled!!

They are.. not favourites these promo pics.. still any of them are better than the one that tried to out glam dynasty!!

Remember the one I’m thinking of? If not I can post it again.. Well that ‘s all for now.. more than enough – when I am trying to keep posts to a reasonable size!

Are you looking for a New Year’s Resolution??
I can suggest one: Get involved at Just walk with me! Post and say hi!! and join the fun with your fellow SMK Fans!!

Hope you are all enjoying the holidays – and Happy New Year! Byeee and I’ll be back before the bomb goes off I promise! 😉 – bye!!