Lee: All right. Now, would you please tell us why you were up on that boom?
Amanda: Well, I was sitting in the bar just, you know, relaxing and enjoying my drink… [her tenth 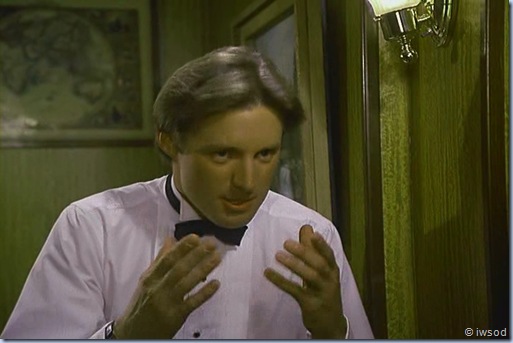 Amanda: Right. Okay. I thought lifeboat C. [That’s lifeboat K for Claudia and anyone else watching in German- LOL!!!

Wait a minute.. before Lee hurried Amanda along- she had started telling her story from the beginning.. from sitting in the bar enjoying her drink- if Lee had not hurried her up to the part with the boom, Amanda would have told Lee about Myles and the lifeboat seating – which could have provoked someone (anyone!) to suggest that this was a set up and that Myles is a crazy stalker because he is a bad guy! Well Lee there is some motivation to not rush Amanda along with her story next time!

Amanda continues: …Seat 24… [Lee gives a little smile on hearing this. Why do you think? my guess is he’s thinking: Ohh that does make 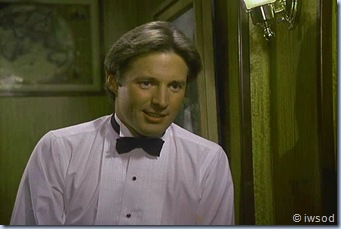 sense!] …There was just no easy way to get up to that boat, [so you shouldn’t have flippin done it!! sneakers or no sneakers!!] …so I didn’t even look over the edge of the 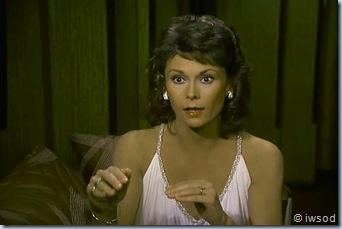 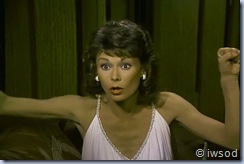 KJ’s expressions here again- Fabulous!!! KJ I hope you one day read this and know what a fantastic job you did and people are still enjoying it to this day!!

Actually, maybe she shouldn’t read this.. she  might have loved her headbands and not appreciate the nark!

Lee levels at Amanda saying slowly and seriously: And you were lucky you weren’t killed…

Awhhh!!! Lee speaks calmly here, not losing his temper. Amanda looks suitably chastened!! 🙂 This new attitude of Lee’s is very swoony! I think in the past, Lee’s response to Amanda putting herself in danger was reflexive anger – but here.. he is much more concerned for her… and he doesn’t just resort immediately to anger to show he was terrified! I think this is a little sign that Lee is maturing in identifying and expressing his emotions: which is just as well because a big earthquake in the Lee psyche is about to take place!!!

Amanda’s white dress looks gorgeous when she is sitting down like that! I want that dress!
Actually.. now I think about it- I think it would make a gorgeous wedding dress!!!! (sans sneakers

Emiliano [whooo!! I completely forgot he was there!

] points out that maybe it wasn’t an accident.. maybe they’ve been exposed.. 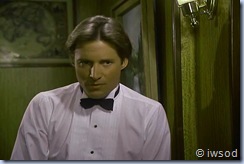 Lee: In that case, we can’t afford to take any more chances. We’ve gotta get Amanda off this ship.

[First thought? Amanda’s safety.. Case? Second! swoon!]
Amanda: Um, excuse me, but, Lee, if I leave, won’t that blow your cover?
Lee: It may have already been blown. It’s just too dangerous to have you on board.

Amanda: But Emiliano said that the funds were being funnelled through San Angelo. And if that’s true, I  don’t think I’d be much safer there alone.

Emiliano: She is right, you know. [Bless him!!]
Lee: Mmmm….
Amanda: Except if I stay with you… 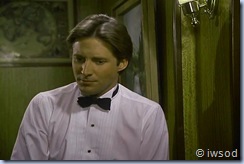 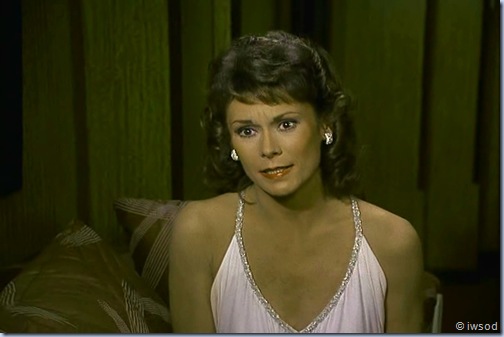 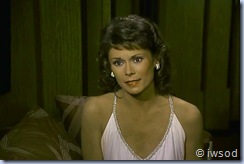 Lee: -we’ll have to get married. 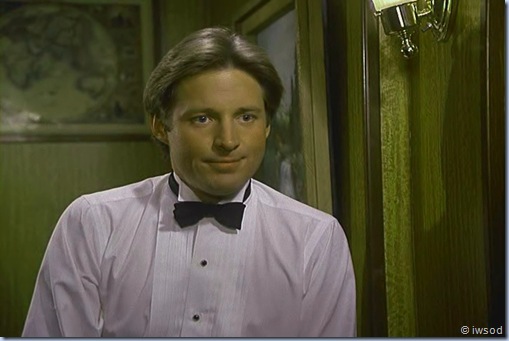 Lee looks terrified.. and then.. resigned!
I love Amanda’s reaction.. 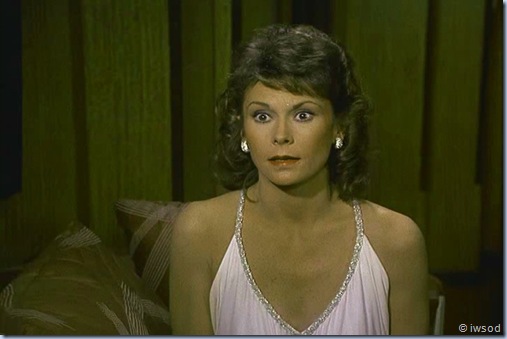 This must be a real shock to ladies’ man Lee.. just look at how little Amanda wants to go through with this wedding! Lee doesn’t want to ask this of her.. but there seems to be no way out.. curious..

I must say Lee’s reaction to this getting married thing is interesting. Clearly he is not looking forward to it, and he never thought they would have to go that far. At the same time – so what Lee? Why does it matter so much to you? I would LOVE to hear what you all think!!!

Is it that he doesn’t want Amanda to have to do this, when he knows she doesn’t want to?? If that’s the case- then why not reassure her it won’t be a real marriage! [as we find out in the tag] Anyone else struggle with the logic here? Not that I mind the lack of logic in this fabulous scenario! haaaa!

Lee seems terrified in his own right though.. and has seemed so throughout the episode.. Does Marriage actually mean something to Lee? I’d guess it does from his reaction! I think his conduct during the ceremony many shed a little light here..

I do think this whole subplot which plays out is a great big fan service: whooo let’s tease them that they are really married!! Ugh!! I can just imagine the promos leading up to this episode.. I would have been in a fan frenzy!!!

What  mental gymnastics can we do here to make sense of this? Or – is there a simple explanation?? do tell!!!!

If I were to get all Freudian.. Could it be that Lee is worried about what going through the ceremony with Amanda would do to him? ie. Would his unconscious drives be revealed?

How he will cope? Will he reveal too much?

I know we all see their journey a little differently, but for me at this point (before the wedding): I don’t think Lee knows there is anything to reveal! !

Is he worried he will have to kiss Amanda again? After all – why not give her a quick kiss when Myles asked for a kiss photo? … Maybe the last time he kissed her it affected him so he is hesitant to go there again…?

Anyone shed some light on this?? or .. anyone else puzzled?? It is a fun topic to ponder! LOL!

Lastly, Little things amuse me! .. it seems someone redecorated Amanda’s room while they were out! Soooo suspicious!! This is definitely Amanda’s room and not Lee’s as his bed is on the right of his room and Amanda’s was on the left (only the wall separated them..

In this scene, Emiliano sits on Amanda’s bed.. Amanda sits on the couch, and Lee leans on the dresser.. 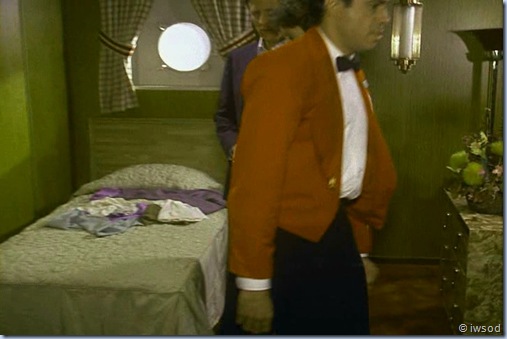 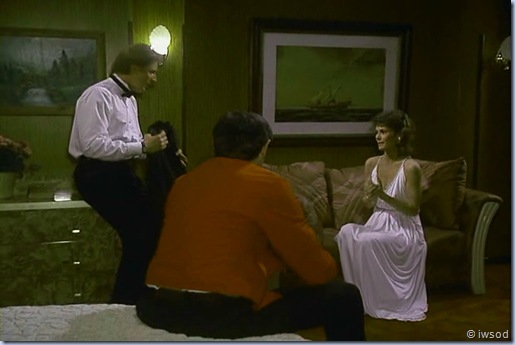 See the wall behind Lee was originally bare. 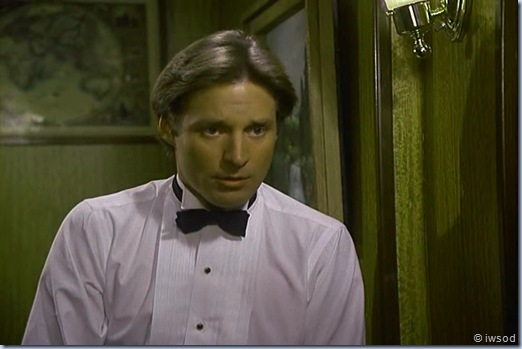 Then, this picture shows up behind Lee, a map…. Which was originally on the wall behind the dresser,

.. replaced by a big painting.. weird!
Maybe they had to come back and redo the scene after the set had been pulled apart or something.. but weird!
That is one magically weird room!

Anyway, I shall finish up there.. so we can get straight into the wedding next post

squeeeeeeeee!!! I am really looking forward to hearing your pearls of wisdom guys!!!!
Byeeee!