Back in the interrogation – Lee finally takes charge!!

Mario: So did you find what you were looking for?
Lee: I don’t care about what’s in the car anymore, Mario.

Mario: Well, you guys really make a big deal out of something you don’t really care about.

Lee: Let me make this simpler for you, huh? Up until a

little while ago we didn’t have much on you, just a couple of minor raps. Well,

about is…your friends out there in the street, they took the car back again. Only this time they took somebody with them.

Mario: So what has that got to do with me? That’s none of my business!

Lee is getting heavy with the lowlife.. Oh swoon!! 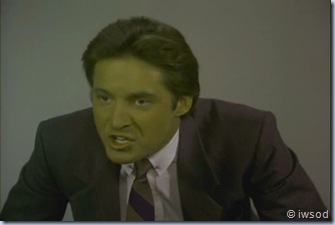 Lee: So?! That lady happens to be a very very good friend of mine! 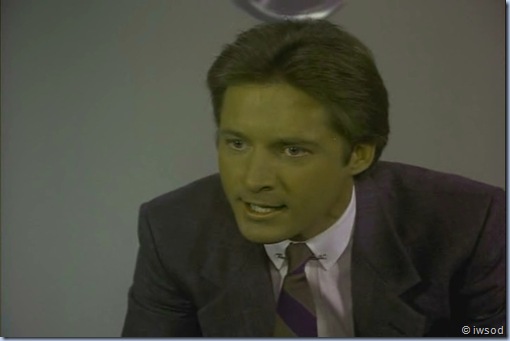 On to McLean’s Muffler World.. the muffler guy is lured into the baddie’s trap because Amanda is with them. Poor guy!

We see he tries to make eye contact with Amanda.. but we can just make out behind Falcone, that  Amanda lowers her head and silently shakes it- she can’t look at him

The baddies tie up the poor muffler guy in the back of the shop (LOL I don’t think we hear anything about him again..)

Back to the interrogation!
Mario: Hey, look! I don’t know anything about a lady being kidnapped, and you ain’t got nothin’ on me, and I’m outta here in a couple of days–

…Anything happens to her-…

…anything at all–I hope you do get out!… 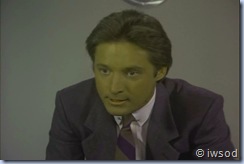 …Because I’m going to let every agent on this planet

know who you are, and sooner or later, my friend

Mario, sooner or later they are gonna find you, and guess what?!… 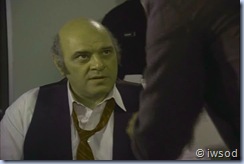 …You will not be coming back to jail!

Mario: hey look man, all I got told is to put the dope in the muffler and drive the car.
[phew! that was quick! way to go Lee!! He says the magic words ‘ you will not be coming back to jail’ and Mario spills! I never would have guessed it!!

Hmm maybe it was all part of Lee’s cunning plan!

Lee: Muffler?? [Lee goes from devastated to hopeful.. with just a single word! ] 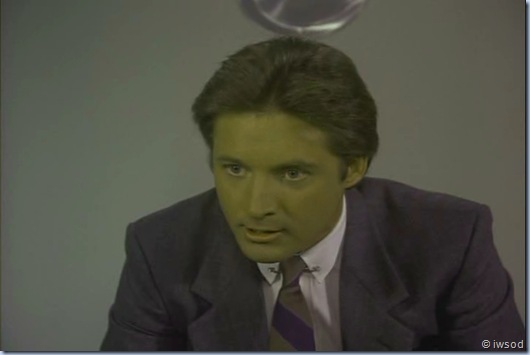 protective Lee is giving me a head spin.. I feel dizzy.. give me a second here..

Mmm ok.. moving on! Lee is off and running… How did Lee know which muffler shop? Ah yes, Amanda helpfully ranted to Lee which muffler shop it was- wow.. good thing Lee is listening to her rants now!!!! [What a great plot device they are too!

Lee tells Francine to get Billy to meet him at the muffler shop- why? Billy is the boss..err… isn’t he?

Yyyyyeeeppp!!! Francine has on a blue dress, blue stockings and bluish shoes?? Whoa!!!! Shocking.. and this little ensemble is finished off with a bow – literally! A hair bow!!!! argh!!!

The baddies are delayed at the Muffler shop as they hunt through all the mufflers finding theirs.. 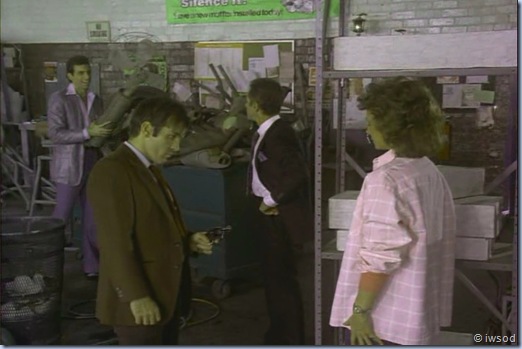 Petronus finds it, gives it a kiss, and puts it lovingly into the back of the stratford LOL!

see the baddies and Amanda right in front of him  panic and then hide? LOL!!! It looks very strange!!! 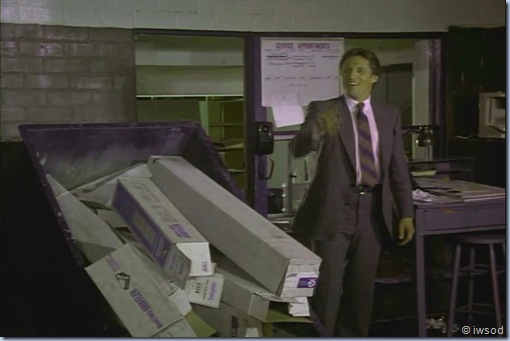 Anyway – it’s action time!..  Love how Amanda disregards the threats from Falcone and runs away from him! Gooo Amanda!! 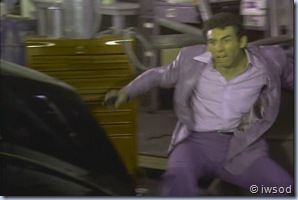 Hmm maybe Lee used magic bullets so he could get his jacket back?!

Also, it is soooo funny how the baddy just happens to put his foot in the circle of the hose!!! 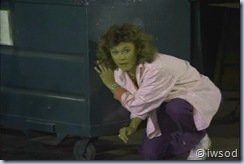 Amanda saves Lee from the baddie while his back is turned.. Lee turns around to see what Amanda has done- stunned!!!

It’s a tad cheesy and convenient eh.. but I don’t mind one bit- because just check out Lee’s reaction when he realises what Amanda has done! He looks at her in amazement- wow!! you did that??

[ feels like it’s after Brunettes no???!!! it does to me!!  Would Lee have noticed it like this before Lee’s epiphany over Amanda attacking the baddie with the lamp in Brunettes?!! thoughts???]

Ugh.. some scenes in this ep are a bit blurry.. I don’t know.. a fault with the discs? but some moments, Like this one are impossible for me to get a clear frame of – sorry I’ve had lots of trouble with car wars pics..wish I had clearer sources but the discs are all I’ve got

Go check out Amanda’s shy reaction for yourselves – trust me it’s cute!

Amanda shyly tosses her head in acknowledgement of Lee’s silent compliment ( which I am looking forward to him putting words to soon!!! Which episode?? Definitely in Life of the party.. but maybe before then too?! we’ll see!! )

Anyway, as Lee and Amanda share a moment, Falcone gets in the car and takes off- driving the stratford through the garage door- hey why not.. the front grate was already damaged

. Love how Billy, the boss, shows up with Francine to clean up Lee’s mess..[Hope they found the muffler guy tied up in the back! Lee only yells out that ‘there are two in the garage’! ]

Ahhh Lee asks Amanda where she thinks she is going.. because she expects to join him for the action finale – Oh Lee.. Amanda and you have to be together!! it’s better that way

Plus.. Amanda says she’s the only one that knows where Petronus’ hideout is.. Only – that’s a lame excuse

Petronus would know that and never go back there.. the guy is not a dummy!

So.. anyway.. Lee and Amanda set out to find Falcone

and the car.. oh goody a car chase….Amanda spots the

car.. and the farce hits new levels.. throughout the car chase, the car is basically destroyed little by little right before their eyes!  [So much for needing to know where his hideout is!]

Lee is stressing about Gino as the car is destroyed bit by bit… bolivian terrorists? no problem!! but Gino? Argh!!!!

You know, I get the humour they were aiming at here- and I usually love this type of ‘escalating farce’ mode of humour  but it doesn’t quite work for me..Why would Gino be upset at Lee when the baddies took back their car and then wrecked it – it wasn’t Gino’s car it was a baddie’s car that had been impounded.. It was all in the name of solving the case, stopping the dope hitting the streets, arresting Falcone and stopping funds reaching Bolivian terrorists- and Lee is still worried about Gino?

For me, it’s not funny if it doesn’t make sense- that’s where the humour is! but it doesn’t make sense Lee would be so worried.  I do love that smk gave it a wholehearted good go though- and usually they do this type of humour well IMHO.. oh well!
Ohh and looky.. Falcone crashes the car: into a scrap metal shop…. What are the odds??!! [Now there’s another clunky coincidence!] … a scrap metal shop with a car compactor.. and a tractor that’s picking up cars and loading them into the compactor..

LOL I am pretty sure Lee was suppose to be punching

I do think it could have been funny to see a big puff of white dust fly into the air as it got squashed! All that dope being squashed! [The Muffler was put in the car by Petronus before Falcone drove off]

Tiny Tag time! I guess this is the next day? Amanda drives with Lee to Gino’s in her station wagon.. she thanks him for coming with her to pick up her car and how nice it is to have it back..

I guess that is why they went in her car and not the corvette?.. hmm maybe Lee was worried Gino would do something to it!

Gino asks where the car is.. I love how Lee says ‘ Oh the Stratford?’ –like Gino could be talking about any other car!

Lee says it is being brought around to the yard.

I love how Lee and Amanda share a look as Lee tell Gino the car is coming now..

Next, we see the forklift arrive with a metal block as it’s load! Cue the dramatic music!!!! duh duh duuuhhh!!!!

The car antenna sticking up – so cheesy and random- I find the antenna really cute!! hilarious!!!! Love the close up on it!!! It’s like we see the car’s point of view as it is driven past Lee, Amanda and Gino!

We move to the wide shot to see Gino mouth gapping as he sees the block of metal that use to be a car!

[don’t worry Gino Lee has returned it with 3 million dollars worth of dope in it!

The episode ends with Lee about to say something to stunned Gino- but Amanda reaches out to touch his arm and get his attention-funny expressions!!!

maybe to stop Lee from talking? Why does Amanda reach out to Lee like that in 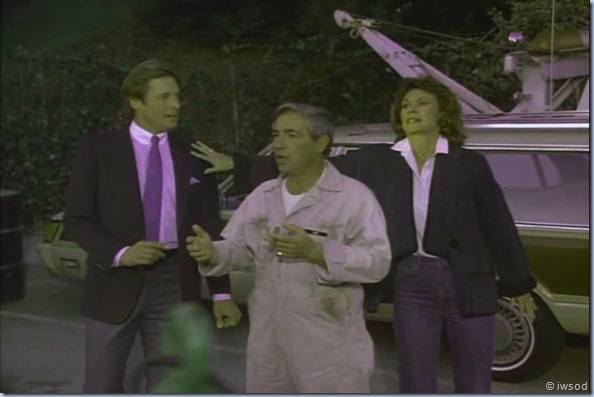 the final frame? anyone?

I thought maybe it was to say – we’ve delivered the car let’s get out of here before Gino recovers!

BTW- What do you think of the title of this episode? Car Wars… I guess it could be a play on Star Wars? (Pattybones, you are the star wars superfan! what do you think?) they are fighting over the car so it’s a war? I don’t know.. what do you guys think?

Looking forward to hearing your thoughts on this episode.. Amanda with pretty long hair, Lee with pretty everything, and panicked protective Lee worried about his very very good friend? hmmm… there were some great moments in this episode!

I am surprised at my reaction to this episode!  I hadn’t thought much previously about the plot- and when I didn’t? I enjoyed this episode much more!!

This plot had too many holes in it from the start for me to take it seriously.. and because of that the humour they tried for doesn’t work.. at least not for me.. still, a couple of special moments between Lee and Amanda… and a very swoony Lee admitting (to someone else!) that Amanda is now a very very good friend

so I can’t complain too much! What do you think? Did you find this episode funny?

Any thoughts you’d like to share on this episode overall?? Anyone not find Lee’s getting tough with Mario swoony???!!!! Byee everyone! thanks for your patience- this episode has taken a long time to cover- sorry for the delays!