On to suburban tranquility.. the birds are chirping.. the sun is shining.. Amanda’s home really is the picture of peace! 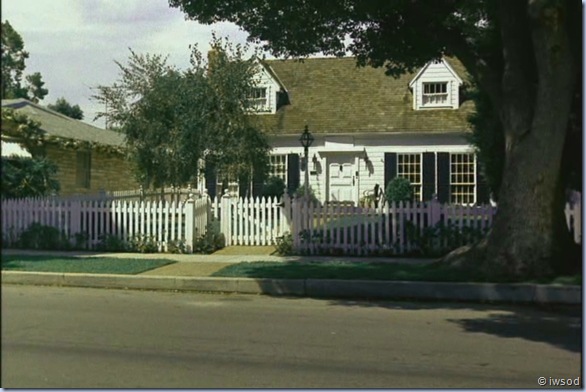 This is such a well written scene..I’m really looking forward to hearing what you all think of it!
[That includes you newbies reading: Feel free to share your thoughts you are very welcome!]
This scene is very much about subtext isn’t it.. beautifully done.. I find it sad.. that so much goes unsaid, but IMHO it is right for the Colonel’s character that this is the case..

Amanda compliments the colonel on his cookie dough distribution!
Col. responds: ha well actually I’m pretty handy in the kitchen!
The oven buzzer goes off.. and the Col offers to get the cookies out of the oven for Amanda..

[lol! I love to watch him struggle with the oven mit! He can’t get it off the hook! It’s like KJ notices he’s taking a while and looks up to see what he’s doing! but.. they stay in character and keep on going! Love it! it makes the scene feel natural!] 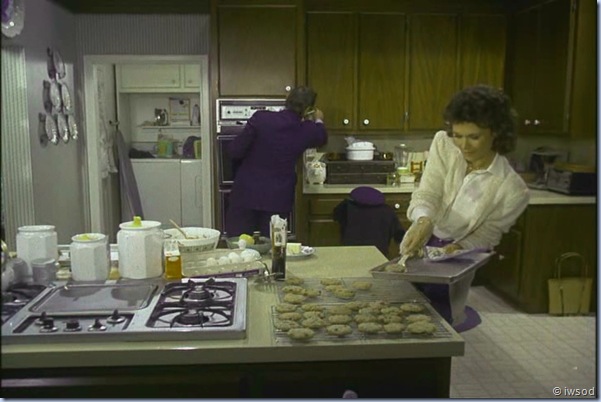 The Col. hands the fresh hot cookies to Amanda and he notices the boy’s artwork on the fridge- awh!!

Col: did your boys do that? 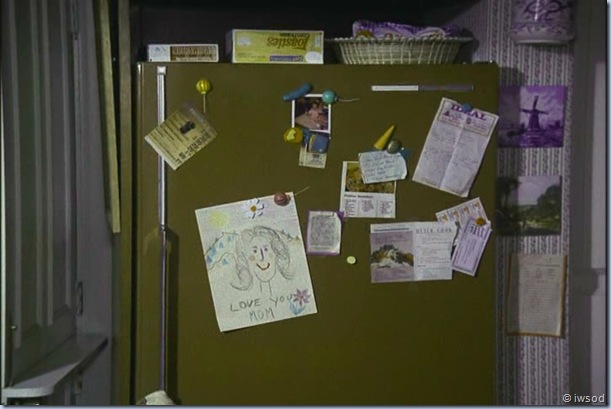 [I love how the pic has given Amanda blushing happy cheeks! I wonder who really drew it?!]
Amanda: Yeah

Col: It must be tough raising two boys on your own…

… You know, they ought to have a manual that gives you all the rules, instead of you making them up as you go along. [such a military thing to say!]
Amanda: Awh that would be much too easy and not nearly as much fun! 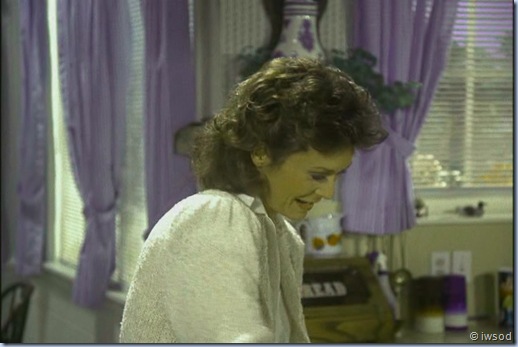 Col: somehow I never thought of raising children as fun. I guess you just do your best.

Amanda: well, sure! didn’t you?
Col: Awh, it wasn’t the same thing… 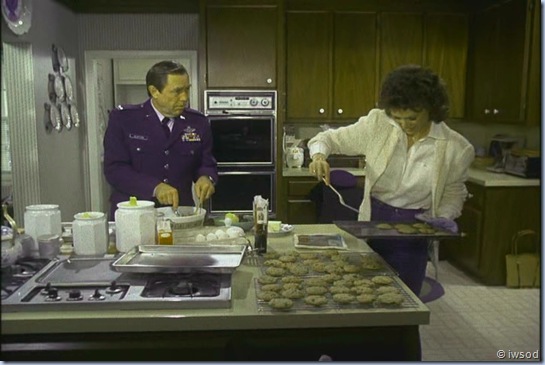 [he starts laughing to himself remembering..] you should have seen Lee when he first came to me.…

… Seven years old and the first thing out of his mouth was ‘Nooo!’ haaa..

Amanda: I can believe that!

[At this the Col gives  big belly laugh!]

Col: boy, he was a tough kid. I remember he had a little girlfriend ahh.. Alice I think her name was… 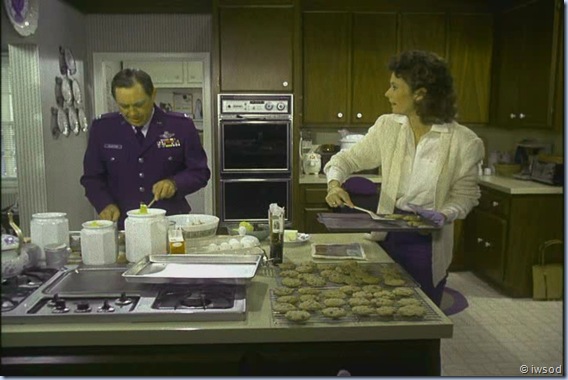 [He remembers her name?? awh!!! he was probably paying more attention than Lee realised!] …and a few of the boys were giving her a hard time, and Lee took them all on… 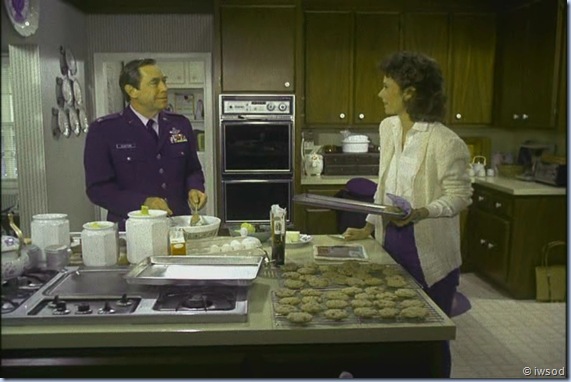 … My God I was proud of him. Two black eyes and a bloody nose and he never shed a tear.

[he really does beam with pride here]

… course he knew better than to do that.. 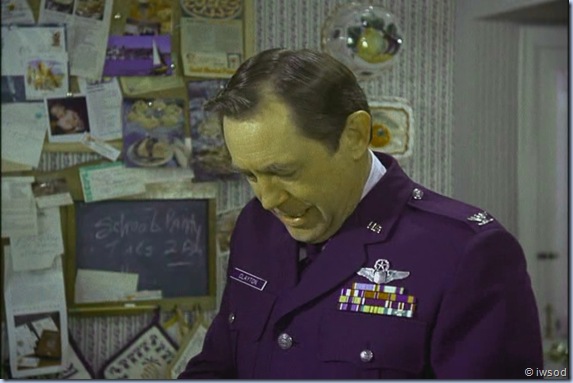 I think Amanda is biting her tongue here.. 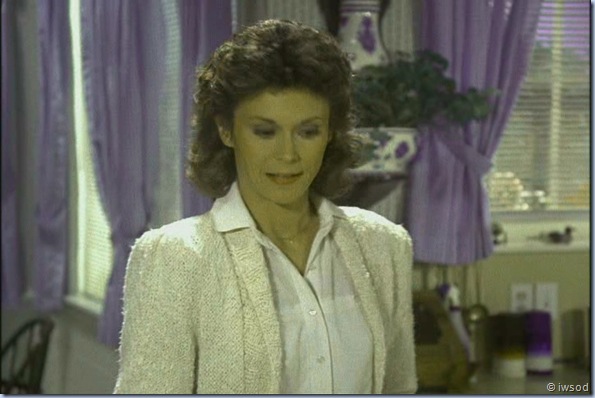 and feeling very sad for Lee that he went through that, and knew he couldn’t ask for any comfort from his uncle.. it’s really bittersweet isn’t it. Tells us a lot about why Lee is the way he is.. awh!!!
Amanda chooses her reply carefully.
Amanda: Ah yeah.. I ahhh guess he probably did. 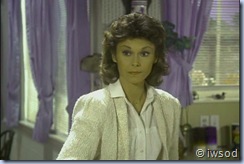 Col: I’ll tell you, he fought me all the way. He still does. We can’t be in a room for five minutes without fighting.

I have never met anyone as stubborn as he is. 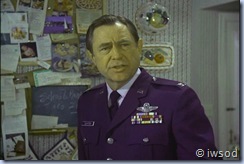 [if this weren’t so sad, I’d be laughing my head off at this! – Colonel.. look in the mirror!!
He’s not very self aware huh!!!
Amanda (again!)bites her tongue.. chosing her reply very carefully- She is very gracious!! 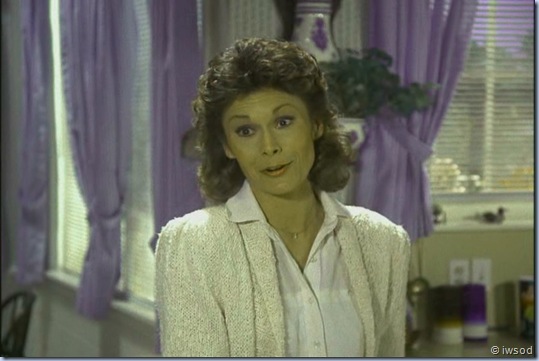 She’s very gentle with the Colonel here.. I would not have been so gentle!

I love how she thinks of Lee and looks so proud of him- proud of him and his own way- not proud of him for not having two black eyes and not crying.. you know? It’s a lovely contrast showing what Amanda gives to Lee that he hasn’t gotten from his uncle.. that wonderful acceptance!

Col: and he is convinced that his way is better than mine… [Aie! it’s not a competition! Why does Lee 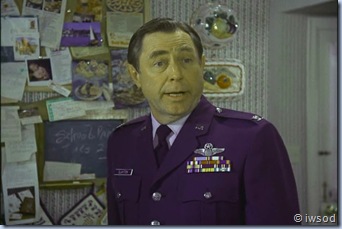 growing up have to be a statement about what he thinks of his uncle’s ways..can’t the guy just grow 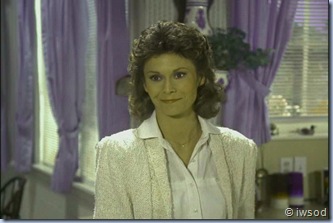 Doesn’t Amanda look sooo happy to hear the Colonel say this about Lee?!! She knows it’s very important to Lee!!

Amanda: you know, I think he would very much like to hear you say that.
The Col gets a little nervous at this.. haaaa.. it’s kinda cute!

he mumbles that’s not so easy to do..

and heads over to the oven to put the cookie dough in the oven, but is so distracted he knocks the tray out of his hands..

Hey I think the Colonel makes a really good go of dropping those cookies as he put them in the oven! I bet that is not an easy thing to act out too! hehehe.. 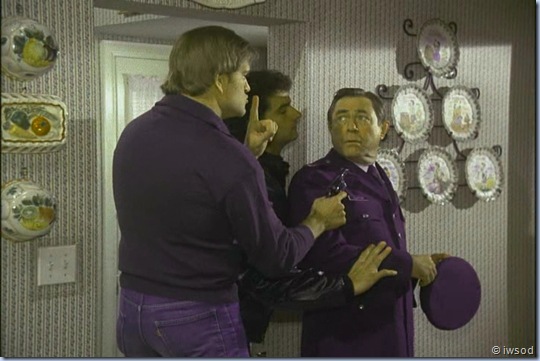 The goons come in and nab the colonel while Amanda is in her laundry cleaning his coat.. but Amanda just catches a glimpse of them.

Kj has the best facial expressions!!
She runs out the front of her house and weeell looky here.. Lee just happens to pull up as Amanda sees them drive off.. ( I hope Amanda turned off the oven before she left!!)

This car chase is a bit of a yawn.. I don’t watch the cars.. I watch the scenery around the cars – it’s much more interesting and magical- why? because we have leaves! 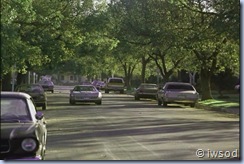 leaves!!! it constantly changes in all the shots!

they must have filmed this over a long period of time.. Oh and did you find the magic RV they drive past twice???!!! 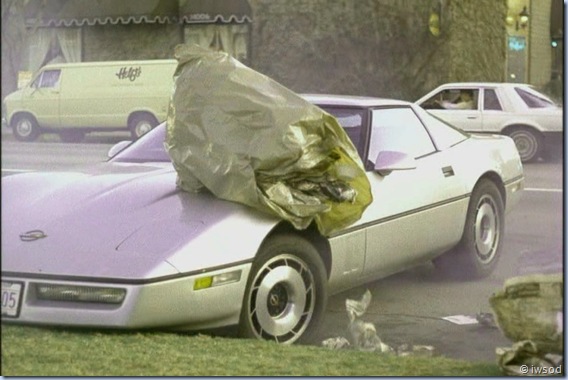 Of course.. for some reason the corvette suddenly hits some garbage.. but luckily it’s the smk kind- garbage bags full of paper or something! ..oops looks like the vette has another dent!!

The script has an interesting additional couple of lines/differences to the kitchen scene between Amanda and the col. In response to The Col saying Lee is convinced his way is better, Amanda responds to him in the script saying: No, just different. You see Sir, Lee is very good at what he does. The Best. And I think he’d really like you to respect him.
The Col responds: I do.
Amanda: But I don’t think he knows that. You see, you have a… uh.. you have a very strong… presence. Which is good. But Lee is your nephew, not one of your men…… Am I making any sense?
The oven timer rings.. and the col has no chance to answer
– what do you think? Are you glad they left it out?

I’m in two minds.. though I do think the indirect way is more in keeping with Amanda’s character…and maybe what the Colonel could cope with…. What do you all think?

Also- is it just me or is this conversation less of a conversation you have with your nephew’s girlfriend?? Now the uncle knows more about Amanda’s family situation.. there is no reference to Amanda being Lee’s girlfriend.. it’s a little confusing!

And why didn’t Lee drop the Colonel at Amanda’s like he said he would? who knows.. Mental Gymnastics anyone?

well I shall leave it there for now.. can’t wait to hear what you think! byeee!