The Costumes of Magic Bus

Before I get started with the costumes I have to share my first picture.

That’s my home town, Deep River. They are stealing my water!!!

This episode confused me at first. I am looking for deep meaningful costume scenarios and all I see is:

I love that frame. No other episode has that slapstick type of filming. There are some funny scenes, but I don’t remember any that are that deliberate. Do you?

But actually thinking about why they filmed it like that, with the water guy looking right into the camera with that kind of “huh?” expression got me thinking. And I think I have something. So bear with me while we look at the costuming for Magic Bus.

First we are going to look at Billy and Francine.

He is looking pretty well put together at the beginning of this episode. 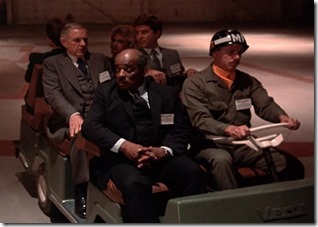 He is in a black three piece suit. He is the boss and he has brought his two best agents to take care of this weapon of mass destruction. No worries, William Melrose and his field unit are on the job. 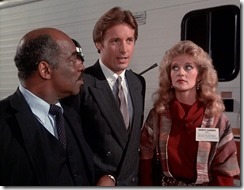 Francine is still looking  “artsy boutique.” I like the fact that even here she is looking very feminine. So far I haven’t minded Francine’s outfits, so far…

We get a tour of the Vigilant and we meet John Paul Jones.

I looked him up on Wikipedia. He was the father of the American Navy, ended up sailing ships for the Russians and died pretty well unknown in France (I think).  His remains were later buried at the Naval Academy at Annapolis.

Next we see Amanda at home (yes I am ignoring everything pertaining to Lee at the moment, this is very hard to do).

Has anyone ever read Alexander and the Horrible, No Good, Very Bad Day? Somehow this first pic at Amanda’s reminded me of that book

Something about the shoes in different colors. Alexander and his brothers were “normal” people, just like Amanda and her boys. They have bad days, even in Australia. (I have completely lost you if you haven’t read this great children’s book. Actually, I might have lost you a few posts ago with the Mr. Rogers reference, uh oh.  Iwsod, enjoy the Australia reference, there are bad days in Australia too aren’t there?)

And that is exactly what she tells Lee, “you can’t call here, real people live here”

She then runs outside to do what? Tell them to get the “not real” RV out of her driveway? But she is not wearing the same shirt.

It is a great picture of Amanda, but even I can’t explain this away. That is a blue striped shirt with a white collar and moments before she was in an all white shirt.

I love it that she is in the same nightgown packing Scarecrow’s lunch as she was at the train station, and that” yummy” blue bathrobe.

She is packing a picnic lunch for a spy who would never appreciate it, but she really needs to get ready to save him from bullets. Wake up, Amanda!!

The next scene takes place in Billy’s office after they found out that the Vigilant has been stolen. Billy is in a cardigan again.

Francine reminds me of a woman from the Twenties in an advertisement for the car in the picture behind her.

And Amanda is wearing one of those cardigans again, the purple one from There Goes the Neighborhood.

I love the way that she is looking at the baddie here. It’s as though she is the one on the outside ( which she is) but she has got his number already.

She is just a “real” person worried about her son and his goldfish. I love everyone’s reaction to her

Remember  these reactions to Amanda, “what is with that woman?” “The million dollar question?” answers Francine.

Billy and Francine continue to wear their typical clothing. Billy in various cardigans and Francine in her usual interesting outfits. Check out the zebra striped earrings, are those animal prints on the stripes of her shirt? 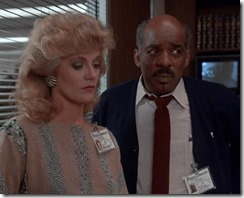 The red and black get up in the final scenes looks very” sci fi” to me, she is playing a high tech role here. 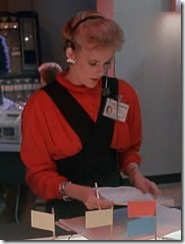 These are the clothes that she and Billy wear when they leave the agency to look for Amanda and Lee. 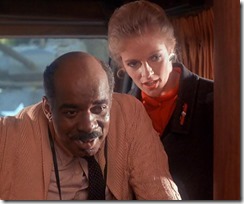 This black jumper is also what Francine is wearing the first time she meets Amanda in The First Time but with  a different blouse. 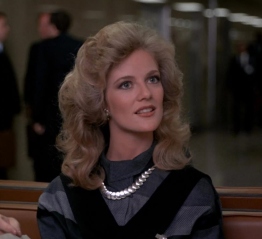 Now I can bring up Lee.

I thought this episode was just a plain old episode, but in every screen cap I took of Lee early on he was making a funny face. I started to think about the significance of an RV being a weapon of mass destruction. It made me think about a housewife being an agent. And then KC made this comment on the costume post for There Goes the Neighborhood and it clicked.

We have Lee Stetson or, rather, Scarecrow–the fashion plate dressed-to-kill spiffy ladies man. Usually not a hair out of place, seems to frown on disorder. Then, on the other hand, we have Lee Stetson’s apartment which–as we see in Saved by the Bells–is quite a pigsty.

I wrap my poor grey matter around it by thinking of Scarecrow and his spiffiness as the mask–the suit of armour and super hero–and Lee and his messiness as the wounded little boy lost man. But it’s quite the dichotomy, no?

The episode begins with Lee dressed all spiffy. Double breasted dark grey pinstriped suit, gray silk tie, gold tie bar.  I love the way he nods as he hears Billy tell everyone how qualified he is to drive the Vigilant. Record holder at both Lemans and Monaco, what would the Top Gear guys say about that? 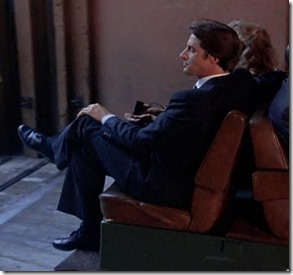 becomes one of shocked incredulousness when he realizes that it is an RV!

Has he ever made that face concerning Amanda? I wouldn’t be surprised if he has. He recovers and is the consummate professional and gentleman as he enters the vigilant for the tour letting Francine go in before him. 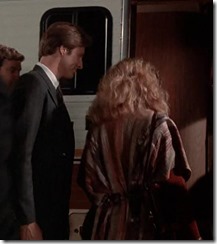 But he looses that professional edge as Billy explains his plan for the Vigilant.

And then the spiffy professional look goes…gradually less spiffy. Maybe he begins to go from  spiffy Scarecrow mode gradually into Lee mode… as he tries to recover the weapon of mass destruction/RV with Amanda housewife/spy in training/ soul mate? (even though they don’t know it yet?)

Here, in the office, he is one of the least spiffy (other than Billy) of the people there in a blazer and plaid shirt. First he learns that all the trouble is because of a couple called “The Stewed Tomato Two”

Come on?! And then Amanda shows up and Lee is the only one that understands what she is saying? Even if he doesn’t like it. 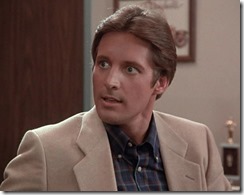 He exchanges the camel blazer for a soft yellow sweater when he goes to Amanda’s to ask for her help. Yellow is the color of the mind or intellect. It is optimistic and cheerful. However it can also suggest impatience, criticism and cowardice. Interesting?

The expression on his face is a reaction to Amanda’s comment about the comedian, It looks like his expression when Billy said they would hide the Vigilant at Amanda’s.

Amanda has on another homemade sweater, I had one like this back then with the puffy sleeves that 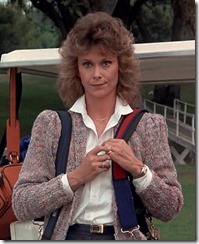 someone had made for me. I noticed that none of the sweaters so far have buttons, Amanda is a very open person.

I love all the faces Lee makes in this episode. I wonder if he thinks the whole thing ( the Vigilant/ RV and working with Amanda/ housewife/ trainee spy) is absurd.

And now they go on to the Survivors Weekend. They are both wearing casual active wear which is appropriate for that kind of weekend. But the differentiation between agent Scarecrow and housewife Amanda King is visually gone. 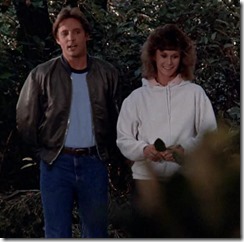 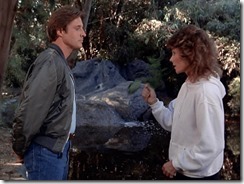 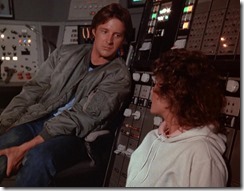 And by the end Lee is no longer spiffy looking, he is sweaty and dirty and his pants are torn.

He has gone from this 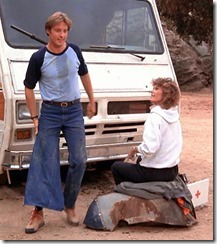 Somehow throughout this episode Amanda has experienced a journey through the dichotomy of Scarecrow into Lee Stetson. Something about a housewife/trainee spy driving a RV/weapon of mass destruction had begun the process of removing the armor from the Scarecrow/ Lee Stetson.

It really is fun to see what can be found when you look closely at a particular aspect of each episode. I hope you guys liked it too.

This entry was posted in Season Two and tagged costume design, Scarecrow and Mrs King, SMK. Bookmark the permalink.

31 responses to “The Costumes of Magic Bus”