Welcome back to part 2 of the inaugural JWWM Tie Patrol report!

On with the show…

What can I say?  I could fill up a whole post for you guys with pictures of Lee looking smooth (right?), so I’ll restrict this to just a few—or more

Hey there, handsome!  (I know, you guys will be disgusted with me for not using Scarecrow-on-the-staircase, but this is one of our first glimpses of him, and…  well…  he doesn’t look so flipping smug in this pic.

Oops!  My bad!  No tie!  (This one’s just to make it up to you gals for not including Scarecrow-on-the-staircase. 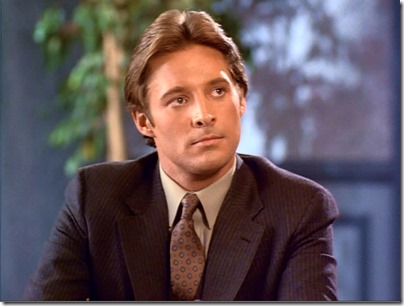 Ah, who am I kidding?  There’s no tie here, either, but there’s just something about Lee skulking in the shrubbery…  and with a genuine smile on his face… 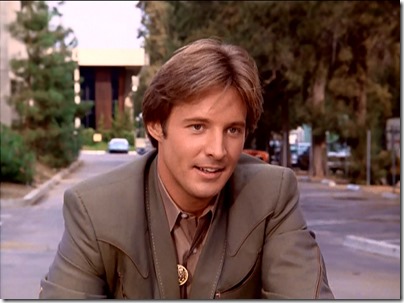 Sorry…  distracted by Lee in the shrubbery again! 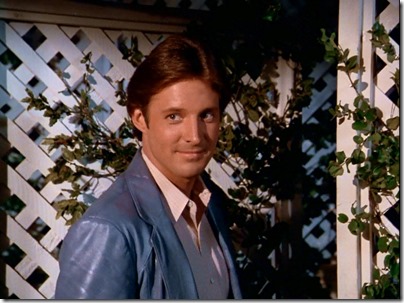 Well, that didn’t quite work out how I’d planned; maybe next post I’ll get things back on track…  (Feel free to give feedback regarding what you want to see more of, or less of, in future Tie Patrol reports…  keeping in mind that there’s not much I can do regarding “less of” Lee’s clothing.

Lee looking not quite so smooth (tie-wise)

So did our super spy look less than smooth at all?

Well, he trashed his tux in The First Time (but still managed to look pretty much the hunky super spy) 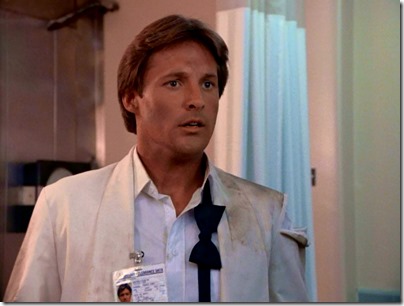 And here’s Lee, in the same episode (TFT), not looking quite so suave in the shrubbery

(I lightened the image slightly, since it was so dark):

Bwah hah hah—such a happy-looking Lee…  he so loves being at the mercy of the medical profession!

He loosens his tie when on stakeout in TACMK (while eating Fritos and bean dip with the nameless agent in the blue van) and again when sitting in the Agency listening van in SAAB (while munching on a sandwich and dropping lettuce on “Jack”)…  I guess it’s tough being super spy smooth guy all the time—Lee needs his downtime when on stakeout, etc.

Then, later on in SAAB, Lee goes for the labcoat look (I love this jacket in close-ups, e.g., in the blooper pic near the end of this post, but in the wide angle views—not so much!

Finally, Lee’s Unabomber look in Saved By The Bells is really not smooth

(I know that this one’s not a tie, but the towel is wrapped around his neck…  oversized bandana, maybe?

No—not ties on special guests (though some of them might be), but ties that I really like that I wish we saw more of (we see them briefly on bit characters)…

Prince Khan—purple tie with embroidered pattern—ALAGHITM (I looove this tie!

And no, it’s not the same purple tie that the baddie Glaser wore in “The Damn Duck” episode (ITCK; LOL BJo)… that one had a paisley pattern: 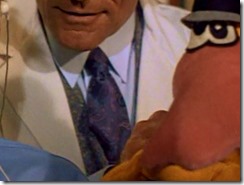 Time for some more fun; this is like Where’s Wally (Where’s Waldo for the North Americans), but in the case of SMK it’s a hunt for Lee’s ties randomly strewn amongst his apartment mess…

See if you can find the three random ties in these two clips (ITCK and SBTB): 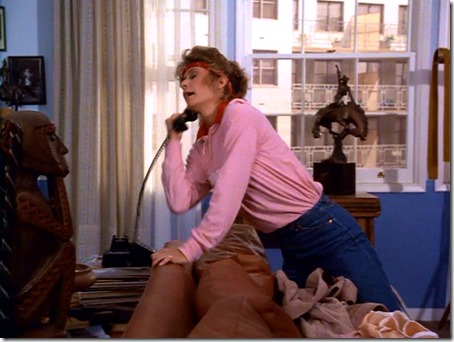 Just as an aside, I actually think the props department might’ve had a lot of fun with Lee’s messy apartment…

Check out what the monkey (?) statue’s wearing in these following two pics (ITCK and TACMK):

Closer view of the monkey in TACMK (I think he looks better in shades! 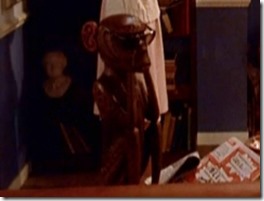 I think we all love Billy in those early episodes, where he’s looking ruffled…  or—at the very least—relaxed, with his top button undone, tie loosened and/or askew…  kind of like he wanted to join the “kids” on stakeout eating Fritos and bean dip, but had to stay in the office and behave himself instead.

It seems that as time goes by in SMKland Billy looks less casual/ruffled, and more polished/boss-like—maybe indirectly due to Amanda’s positive influence/example at the Agency, helping to keep the rest of the “kids” (i.e., mainly Lee and Francine) in line?

The First Time (Billy looking relaxed in his comfy chunky cardy and no tie):

There Goes the Neighborhood (Rocking a different cardy, then a cardy vest): 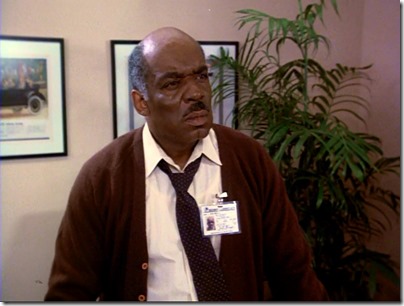 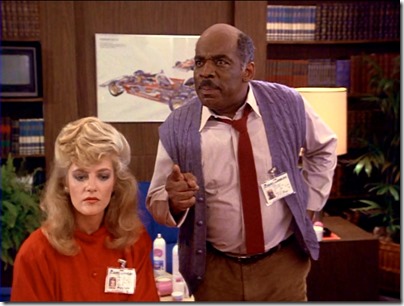 Magic Bus (Ooh, the brown cardy again and then the comfy chunky cardy):

Always Look A Gift Horse In The Mouth

I think this one is my favourite; Billy is so distracted in this scene, almost ignoring Francine while focusing on what’s really important—looking for his coffee mug!

It almost looks like someone grabbed him by the tie before he walked into his office (and he’s wearing a real vest, not a cardy—way to go, Billy!): 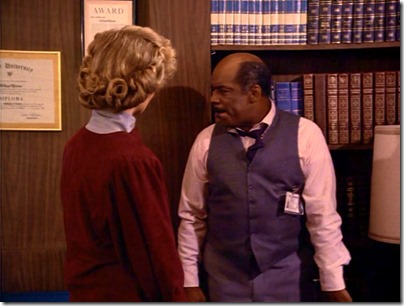 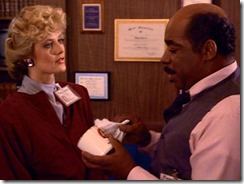 Saved By The Bells (No cardies!  But—

—Billy’s second outfit is the same as in ALAGHITM): 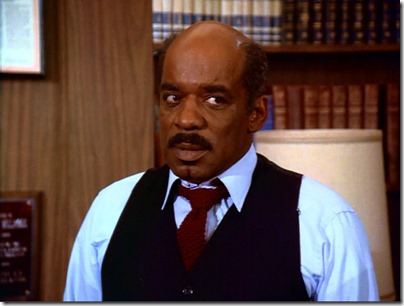 )—in the Agency listening van in SAAB, he’s got the tie loosened: 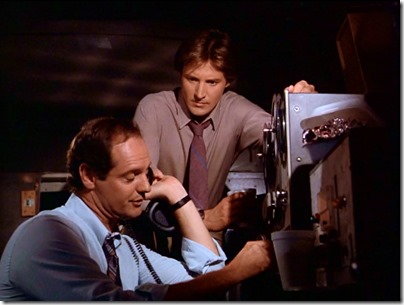 He straightens it (off camera) before heading in to confront Amanda in the bathroom: 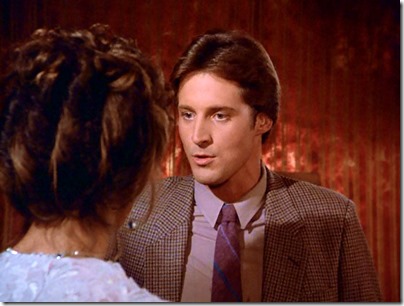 Then, after Amanda ditches the listening device, Lee catches up with her at Victoria Greenwich’s house… and his tie has been retied—check out the placement of the stripes (OK—so maybe he got frustrated at finding out he was duped and not in the kitchen

and took the tie off in his disgust then retied it when he was back at Victoria Greenwich’s house, but I choose not to believe that): 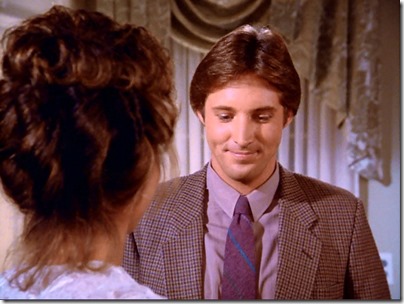 There Goes The Neighborhood

Lee’s grey tie is very busy at the start of this episode, and I think that it’s actually two distinct ties.

My evidence?  It appears to sit differently (like two different fabrics) and the pattern is somewhat similar but not identical.  See what you think…

When we first see Billy and Lee the tie is knotted smoothly and flows fluidly down toward his lapels: 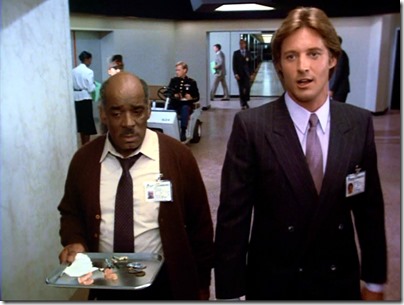 Then, when Billy and Lee are talking outside the Bullpen (right after Billy mentions Lee’s department!), suddenly it’s knotted with a big dimple and appears to be of stiffer fabric, sitting concavely (yes, the suit’s the same—the lighting is different): 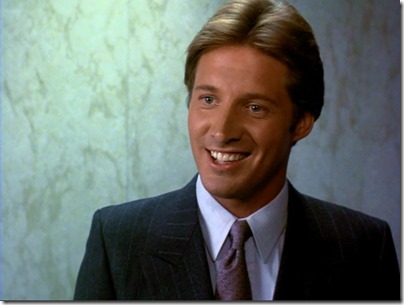 And then, in Billy’s office and when Lee meets Amanda in the lobby, it’s back to the smooth knot and more flexible fabric (fluidity more easily seen in this shot) 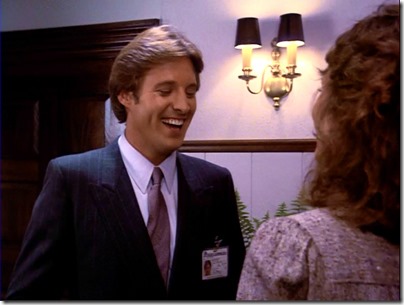 And when Lee rescues Amanda from Mr. You-would-look-delicious-in-blue Davenport at Honeycutt Typewriters, the tie-dimple is back: 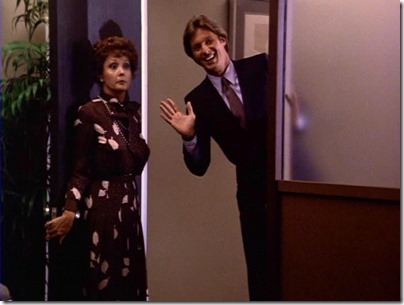 Finally, when Lee and Amanda are talking on the street—in the wind

, or have I just been down the rabbit hole too long? 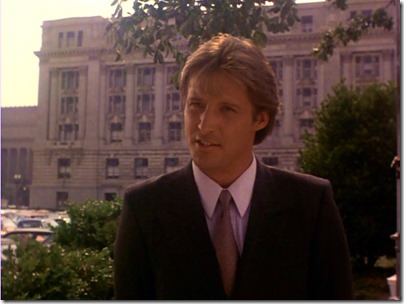 Regarding the “not identical” pattern, compare these cropped images of the “dimple” close-up shot a couple of images up with the original tie as seen in Magic Bus (just ‘cos that’s the closest shot I could find of the tie; ignore the red/brown discolouration induced by the lighting inside The Vigilant in the second crop):

(Hey—is one of these Stunt Tie?)

In SAAB, we see a different sort of blooper—the inverted image…  (Yes, it’s a tie-related blooper…   there’s a tie in the camera shot!!!

This is how we see Lee in this suit and tie (and pocket hanky—note the pocket hanky) for most of the episode:

But when Lee meets Amanda to tell her that “… we want you to (pause) continue your relationship with James Delano…” the frame has been inverted (transposed). 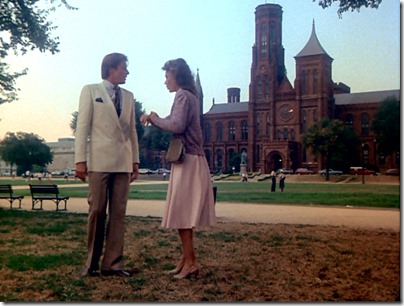 BTW, the building in the distance behind Lee and Amanda is the Smithsonian Institution Building in Washington DC (in reverse)—here’s a correctly-aligned image of it courtesy of Wikimedia Commons (© Túrelio via Wikimedia-Commons):

Saved By The Bells

In SBTB, there’s a tie hanging over Lee’s telescope (gotta love those ‘80s blunt-cut ties!) which magically moves (as does the telescope)…

When Scarecrow leaves his apartment (note more tie fabric hanging towards the viewer side of the telescope):

Just a couple of minutes later (more tie fabric hanging on the far side of the tilted-less-than-before telescope):

Well, that’s it for the inaugural Tie Patrol report.  I hope you guys enjoyed it—I had a blast patrolling!

I’ll just leave you with a few statistics…

Some tie statistics for these first 8 episodes

Officer KC signing out—thanks for riding along on this first Tie Patrol report!

This entry was posted in General SMK, Guest Contributor, Season One and tagged Scarecrow and Mrs King, SMK. Bookmark the permalink.