We pick up right where we left off in the last post!
Lee’s glad Amanda knows the truth about his cover.. 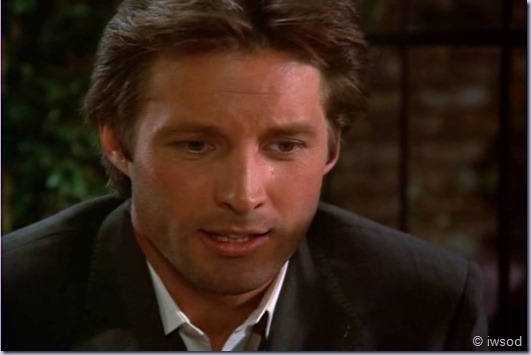 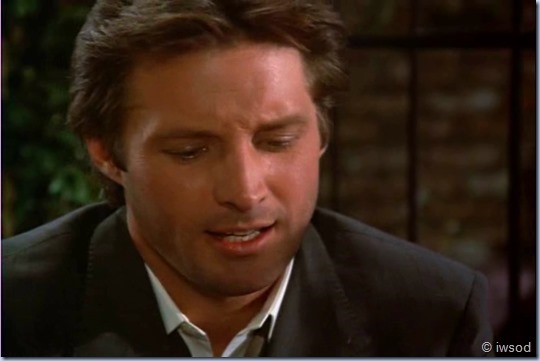 …There’s something else I’ve gotta talk to you about. 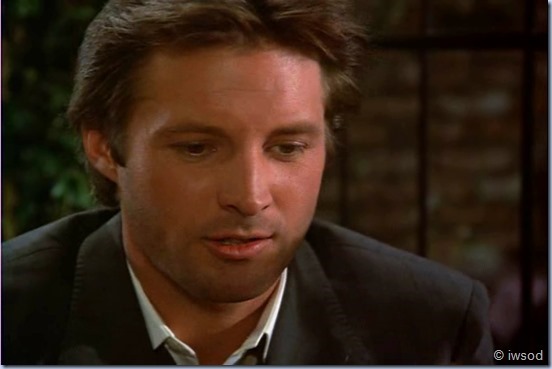 [What a good man for bringing this up, not avoiding it and dealing with it- Lee is growing in his maturity in relationships would you say?]
Amanda:  No. That’s all right.

[ugh! Amanda!!! shush!!]
Lee: No no, no, no.
[Lee sounds so gentle with Amanda here – awh!!]
Amanda: No, no, really.
Why do you think Amanda tries to stop Lee from talking about the slap?
I’m thinking she’ already forgiven him, and.. she can see how it upsets him so wants to help him by giving him an out. so glad he doesn’t take it though. He hurts, but he simply must apologise IMHO!

sooo glad he does!! 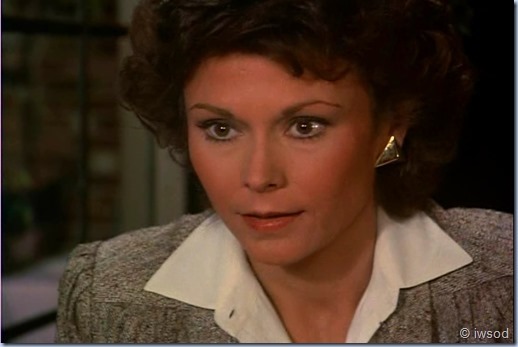 Lee: No, listen. There’s some things that I…

…Back there at Nedlindger’s, what I did and,… 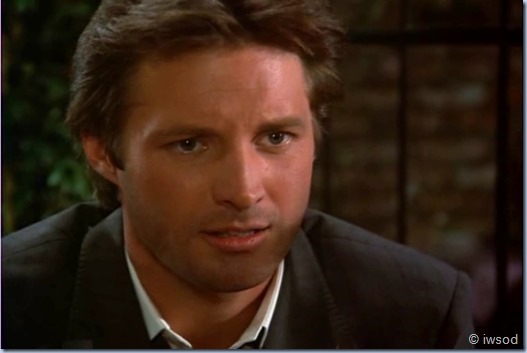 …you know, what I said, it was just to, to keep you away from me, that’s all.
[It’s like Lee can’t bring himself to say the words again ‘I hit you’ -it’s so awful. Interesting to remember that in Savior Lee says some unkind things to Amanda [Such as ‘go on home run a couple of loads through the spin dry, I’m expecting someone.’ and denying they are friends ‘we’re business associates. Former business associates’]

– but when his cover is revealed- he didn’t apologise for them or make it clear to Amanda I didn’t mean it- he just accidentally says they are friends! An interesting difference which shows the growth in Lee and his relationship with Amanda- now he feels he must not leave this unsaid 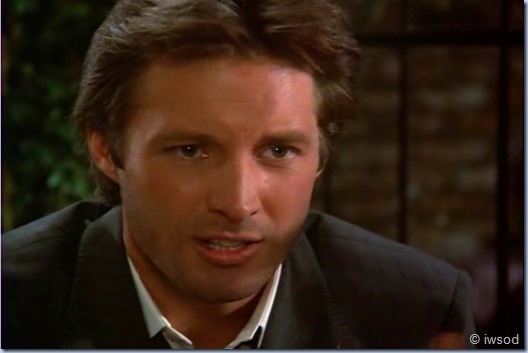 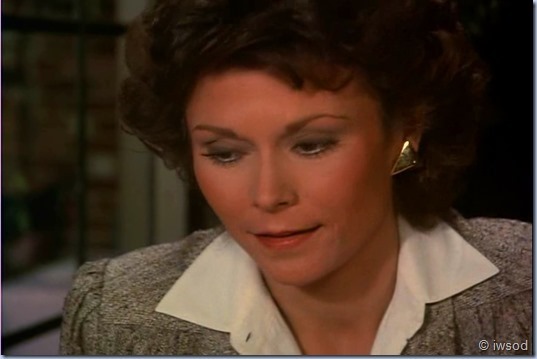 [Lee calls to her here- asking her to look up at him. Amanda raises her head and meets his eyes] 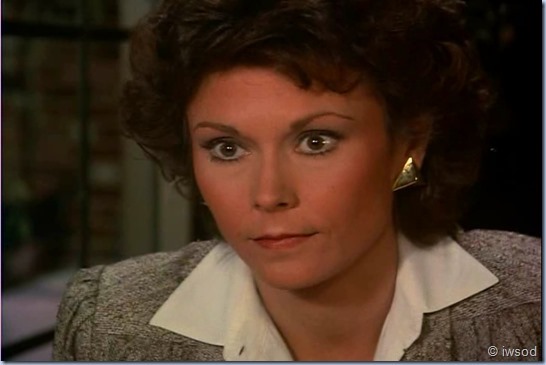 … I really am sorry.
Amanda: That’s okay…
[I think she had forgiven him already-when she did the report for him and spoke to Billy.. just my opinion. Thoughts?]

…I really do understand.

Would you check out this reaction from Lee!  sooo many pics.. sooo little time.. and soooo many close ups of gorgeous Lee looking as gorgeous as he ever has – because he is being soooo lovely to Amanda!  hoohaa!

Lee shakes his head and smiles in amazement at this woman sitting in front of him. I think it positively beams from Lee here – how flippin lucky he knows he is to have the trust, loyalty and acceptance of this amazing woman!!!!  Hmm though, they still haven’t touched each other!…

I love that Lee takes a stand- hitting Amanda is not okay and never will be okay. He could have brushed it off as part of the job- that isn’t quite right, it’s not the response of a good man – and Lee is a good man!!! It is so wonderful how careful and clear he is in his apology- it is extremely important to him that Amanda see how sorry he is and accept his apology.
Glad to also see Lee didn’t fall into a heap of self-recriminations, was able to ask for forgiveness- and he was able to accept it

I think he’s going to be okay!

tee hee.. This is a very positive sign for Lee and his future. The guy is actually being quite healthy here – and I think it’s in no small part thanks to the support and encouragement of Amanda. Lee’s trust in her makes it possible for him to grow, and to be confident that she accepts his apology and knows he is a good man.
Yep, no burn out for Lee quite yet haaaaaa.. now.. about this case he is on.. Lee isn’t quite out of the woods yet in this episode..

Close relationships create challenges for an agent, but they are a blessing, they are rewarding and they are worth dealing with a few extra challenges, plus – we need them!  I think the slap gives Lee food for thought – this job, being an agent, asked him to do something he should never have done to Amanda [in a way, the slap damaged both Amanda and Lee]. Lee needs to set some limits in his work – and gain control over his life, who he is, who he wants to be – and stop giving this over to the job. The job is not everything! He is just a number at the agency, and they are not going to take care of him – he needs to take better care of himself and set some limits- or he risks real burn out [This element of the episode is fascinating to me

With support from Amanda- Lee can be a better agent, and a better man. Lee has gone from completely alone and undercover, without Amanda, to knowing he has her full trust in a way he never could have known before the slap. Lee screwed up sooo badly- but Amanda is still here and she forgives him – that kind of acceptance, reassurance and security is not something Lee has had with very many people in his life since his parents died..

Also, wow wow wow at how strong Amanda is- though also vulnerable.. sweet! She really has grown up in her agency work huh… She understands… Lee is very lucky! But.. he knows it! I also think there is a wordless agreement here between them- that this sort of thing would never happen again!!
Do you see Amanda learning through all this? What? do tell!

I think Amanda’s growth as an agent, is huge in this episode. While Lee should not have slapped her, I don’t see Amanda accepting that behaviour with regularity – IMHO she figured it was to do with the case, and could see Lee regretted it- she trusted Lee and forgave him for it.. From a spy perspective – she’s an absolute trooper! It’s like she is growing to be a little more detached from what the spy biz entails. LOL Lee seems to be experiencing growth in the opposite direction! His eyes are widening to see the full ramifications of his actions.. and that ‘the personal’ matters.. I guess Lee and Amanda are great for each other with this- and eventually they meet in  the middle.. I think I mentioned something like this in Spiderweb- again that episode comes up!!!

What do you all think?

What do you make of Lee’s explanation that it was ‘all to keep her away from him (what he did and what he said)? I think there was more to it than that.. but maybe it was the final factor that tipped his hand? I mean I don’t think Lee would be intentionally lying to Amanda here in this apology-it’s got to be the real deal! [maybe real but not the whole picture??Maybe Lee is lying a little to himself about all his motives for the slap] What do you make of it?? thoughts??

I think we could discuss this scene for a whole week! LOL!! .. we can if we want to! If you don’t have time to discuss this now – do feel free to come back anytime and share your thoughts on this!!  byeeee