The armed bomb is loaded onto a trailer and the door is closed on it.. 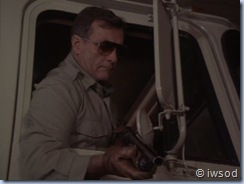 Wait a minute… Sooo the truck the Major was leaning out of and pointing the gun at Lee from – it drove off and left Lee? the crane with all the guys just left Lee?? Lee is left alone with no one guarding him and the trailer which is transporting the bomb is still parked in the tunnel? rofl!! everyone just left it? whahahahaaa!!  That is too funny!

Yep Cindy these baddies are pretty dumb! Everyone seems to be super dumb this ep! LOL.. the only smart guy seems to be Ballon.. ironic!

Lee makes a run for the horse trailer being pulled by a.. Stationwagon!!!! Everyone has kindly left Lee to get on with running after the stationwagon unimpeded!

Is it just me, or is Super Lee a really fast runner??!! Aie!

Meanwhile Amanda is pleased she is on schedule.. she doesn’t pay much mind to the huge thud on the roof of her car.. until Lee pops his head into her windscreen.. upside down and yells at her to not put on the brakes.. ohh the expression on her face when she sees him is just priceless!!! too funny!! 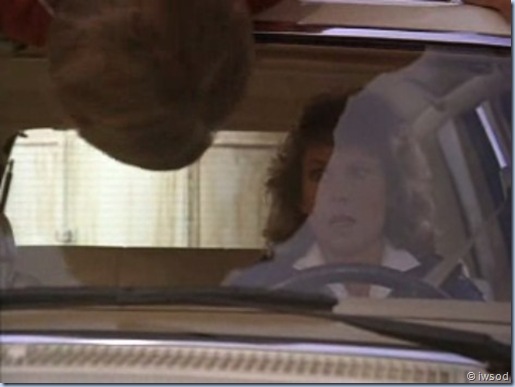 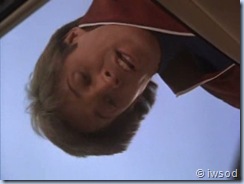 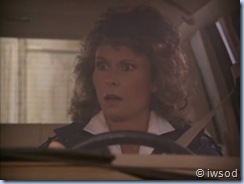 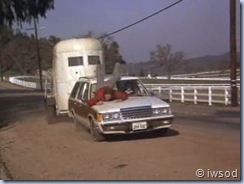 Hahahahaa! I love this pic!! I am guessing that is not BB with his legs in the air.. but it’s still funny! and love all the whoa!! that he does as he slides down onto the ground.. ( Hey, it’s all your fault anyway Lee.. count yourself lucky she didn’t keep on drivin..

Love how Amanda quite bodily picks up Lee and

sits him on the hood of her car to make sure he is ok!! hehehee.. (any excuse for a cuddle Amanda!!

) hehee..) Amanda: Okay, look, I tell you what, why don’t we talk in the car and then we’ll be able to stay right on schedule.
Lee: No, no, just forget the schedule, huh? And

you forget everything that Ballon ever told you. I don’t know what he said to get you into this, but he is not working for the Agency. I am!

Amanda: You are, but he isn’t.
Lee: That’s right.
Wow.. if only Lee did know what Ballon said to get her into this… I wonder if he finds out later.. It would certainly be an interesting education for Lee and his treatment of Amanda -at least I think so! (Love how Amanda immediately accepts what Lee says without question. she knew he hadn’t turned bad!!!

)Amanda: Then why am I hauling this trailer around?
Lee: Well, let me ask you this: Who is the least obvious person in the whole world to be hauling a secret weapon, huh? A suburban

mother in a station wagon hauling a trailer, right? Now, where are you supposed to be meeting him? 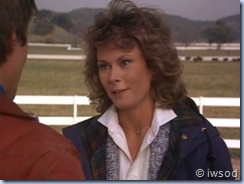 Amanda: He lied to me and I believed him. I am really foolish.

Lee: Hold it, hold it. You believed in me. Huh? You did what you

did because you trusted me. 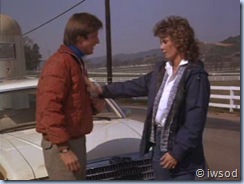 (Amanda silently sweeps her hand down his jacket, dusting it.Awwhhh!) Now, I don’t know anybody who would go that far out on a limb for a friend.

Ok. I will try and overlook how at this moment it switches to

close up and Lee is suddenly holding her arms with both his hands! Lee moves fast 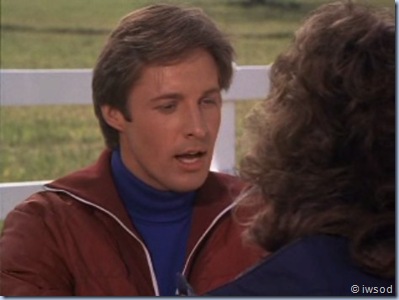 Lee: Amanda, you are not foolish, you’re very far from it.

(Is it my imagination or does Lee

look at Amanda’s lips as he says this?!)

He’s so gentle with her and how he says this line to her.. awh.. 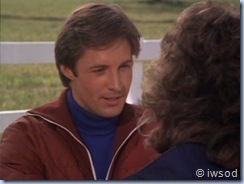 It is interesting I think that Lee immediately assumes that Amanda got into this mess because she believed in him.. and that it was all about trusting him.. well.. now that is true..but well Amanda also did it for her country!!! Not just for Lee!!

It is nice to see though how confident he is that Amanda has great belief in him! 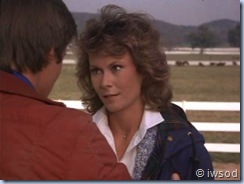 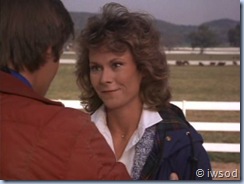 and he can’t seem to make eye contact with her!!!) . . exaggerated a little.

you supposed to be hauling this bomb?
Amanda: Bomb? (love how at this point 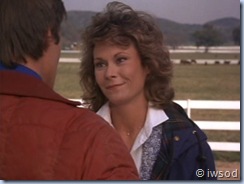 Lee: Oh.
Amanda: What bomb? ( I LOVE the look on her face when she says this!!!! Such great comedic delivery!!! KJ is sooo

Amanda: He’s a bad person, he’s really unsavoury.
Lee: Right, right, he is unsavoury. So where are you going to meet him, huh? (Love how Lee here acknowledges what Amanda said about him being unsavoury. That is quite sensitive of

Lee: All right, I’m going to have to borrow your car to make this delivery. (I’m surprised Lee thought that was a good idea!! )

driving, he’ll get in the helicopter and he’ll fly away, it’ll mess everything up.

Amanda: Not if I keep driving.

Lee: No! No way! You don’t know what’s waiting for you down at the end of that road. Now, it is too dangerous.
Amanda: Lee.
Lee: Amanda, I am telling you

— (whoo he really gets mad here!! I love it when they fight and are friends!) 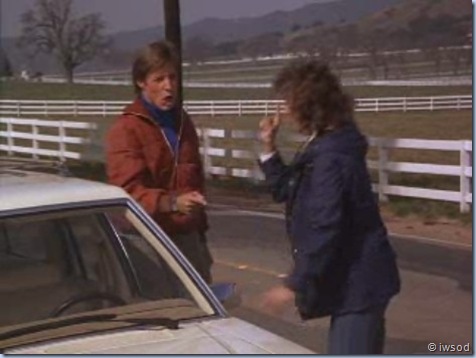 Amanda: I feel responsible. I got you into this, and I’m going to get you out of it. And besides that, he doesn’t even know that you’ve talked to me.
Lee: Do you know what will be waiting down

there, huh? Ballon and a bunch of guys with guns, now I’m not going to let —
Amanda: I don’t have a gun! What kind of a threat am I? Besides 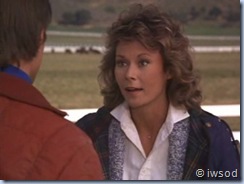 that, it’s not a real bomb! ( whooo hooo Amanda.. I love it… you talked him down.. and then.. around!! Look how calm Lee is seeing again that you are right! )

Lee: All right. We won’t have any backup. It’ll be just the two of us. (Hello Lee? since when have you and Amanda ever had backup hmmm?? oh wait.. your personal assistant Billy sometimes likes to back you up like a good employee!!) 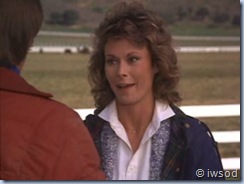 Amanda: I have you. You’ll figure something out.

Lee finds a tiny camera and gives it to Amanda..( Hey what happened to his walkie talkie?? he couldn’t call for back up??)  Amanda is to take photos at the hand over.. and he will hide in the car until the right moment.. Oh Amanda.. I thought you had a degree in photojournalism?? There they go making Amanda sound super dumb.. She wants something simpler than this tiny one button camera??? ugh!!!!

Hey what happened to that protection Blue Leader said Amanda needed? You know.. that whole thing about how Amanda ‘should be protected, not told’???!!!

You know the script had Lee revealing himself on Amanda’s roof – and then Amanda calmly pulling over with Lee still clinging her roof?? LOL.. I like this way much better! Suffer Lee

You should have told Amanda in the first place!

Well I will leave it there for now.. thanks for reading and as always I would LOVE to hear from you..