Welcome to the inaugural Vehicle Patrol report! Like Tie Patrol, in this first report, we’ll cover Season 1 Episodes 1-8; later reports will vary in the number of episodes covered…

Now—sit back and enjoy a bit of a stroll through some of SMK’s vehicle moments.

The first (distant) glimpse we have of Amanda’s car in the series is in a scene-setter in The First Time, when it’s parked in the driveway outside her house: 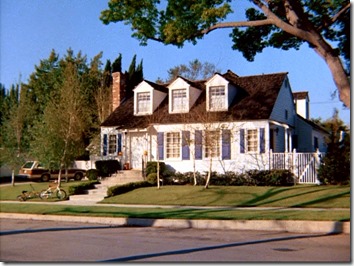 Not long after, we see Amanda and the boys (and a friend) in the Ford at Moby’s Dock… and as Amanda is escaping from pirate Scarecrow

, we see a glimpse of the interior (those’re some pretty sweet seats!

) we see Lee’s Porsche, it’s parked in the garage at the “dumb” (Amanda’s word) costume party: 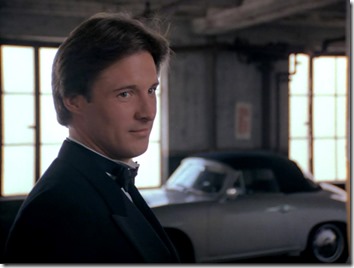 Lee gets very worked up and explains to Amanda “We are in the garage! Do you think that I would let those valets park my car? A car that happens to be a classic 1963 Porsche 9… 350…”

Oopsie! (There’s a discussion about the car at the Internet Movie Cars Database.)

, or deliberate acting to show Scarecrow worked up

about how much the car means to him? I went to check the script on Petra’s smk-land site (thanks, Petra—you rock!

) to see if it would shed some light on the mystery of the Porsche model, but in the script (third draft, 3 February 1983) the party takes place on a yacht at the marina –> no parking garage scene—their escape from the baddies was to be made on a launch!!! (However, the script does note that Lee’s Porsche is “a classic 1965 model” in the scene-setting notes for the post office break-in—not 1963.)

Unlike Amanda’s car, the license on Lee’s car is very elusive

in these early episodes (the Porsche doesn’t have a front plate, and we rarely see [all of] the rear one, I guess ‘cos he’s a top agent—ROFL!)—but it turns out to be Washington DC plate 9S1-407.

Later in the series, the Porsche 356 morphs into a Porsche Targa.  At the 30th reunion, BB referred to the Porsche (or Porsches, I guess) as a “bathtub with wheels… that constantly died”. ROFL! He seemed very happy that the Porsche was eventually replaced by the Corvette (Washington DC 3N6-105).

More on the changes when Vehicle Patrol gets to those episodes…

So—just how did SMK go about making the vehicle license plates look realistic, but not too realistic?

The blue text on white “NATION’S CAPITAL” style Washington DC vehicle plate—used predominantly on SMK—was, in reality, only issued between 1978 and 1984. (However, this tag line had been previously used—between 1968 and 1974—but in black text on white, and with no graphic, or lines.) The immediately previous tag style (used 1974-1978) was “BICENTENNIAL”, and in 1984, the style switched to “A Capital City”—used until 1991.

Note: There are a handful of other state plates seen on SMK (e.g., Maryland), but I won’t discuss them here, since there are too few occurrences.

For the following license plate contributions, please keep in mind that many of the plates in an episode are unintelligible (hidden or partially hidden, not so great resolution, moving too fast, etc.)…

However, please be sure to shout out if you spot any errors or omissions on my part!

I believe a real license plate—Washington DC plate 794-633—is seen in SAAB, outside of Victoria Greenwich’s house:

“Frankly, Ricky Joe, …”)!  It’s nice to know that the baddies pay attention, though: 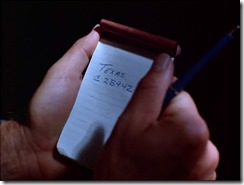 So—that’s it for now, kiddies.  Does anyone have any thoughts regarding how well Lee and Amanda’s cars suit their personalities and lifestyles?  (It’s OK–it’s SMKland…   practicalities don’t have to be involved!)  Just off the top of my head, I think the cars do kind of suit them: Amanda’s station wagon is practical and reliable—just like her—although not one of a kind the way she is, and Lee’s Porsche is a showpiece—like Scarecrow (as opposed to the hidden Lee).  I think it’s Lee that likes the the fact that it’s a classic…  maybe likes the idea of having something with history since he missed out on so much with losing his parents (does that make sense?).  It does crack me up, though, seeing them—or even just Lee—tooling around in the little car (though not quite as little as Cousin Itt from the Munsters car—a Messerschmitt KR200).  Thoughts/comments, anyone?

I’ll return with the next part, which will include gems such as Amanda’s license plate goes AWOL, magical moving license plates, and crashed/wrecked vehicles, in a day or two…

In the meantime, let me know if there’s anything you’d like to see Vehicle Patrol cover!

This entry was posted in General SMK, Guest Contributor, Season One and tagged Scarecrow and Mrs King. Bookmark the permalink.