Moving on to preparations for Nabuti’s arrival at the mansion.. Amanda and Byron have stopped by to work on the security system. Amanda walks to her car accompanied by Byron.

Bryon: I’m impressed Amanda.
Amanda: well, it really wasn’t so much.
Byron: No seriously! Having the bedroom light strobe when you press the panic button? Great idea.
[rofl.. is it just me or is this really a bit of an over the top reaction to her idea??]
…I think President Nabuti is gonna appreciate it.
[LOL I don’t think he’ll even know about it.. ugh.. seems to me like Byron is trying to butter up Amanda! He also butters her up by opening Amanda’s car door for her- impeccable manners!

…And, I think I’m gonna include it in our overall security package.
Amanda: well, I’m glad you liked it. 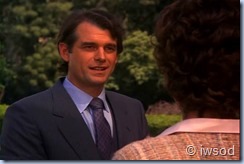 Byron: Listen, Amanda there’s a couple of other things that I’d like to discuss with you. But I’d like to do it over dinner? [I’ll bet you would! ]
Amanda tosses her head and smiles: Sure! When? 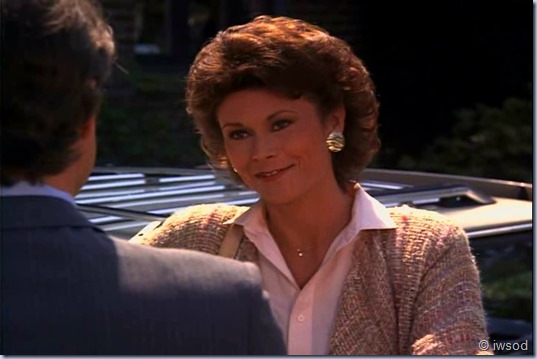 [no hesitancy from Amanda here IMHO she’s open to 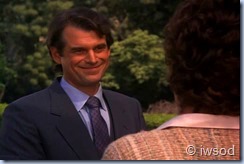 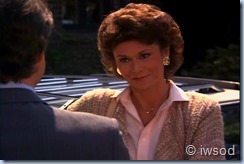 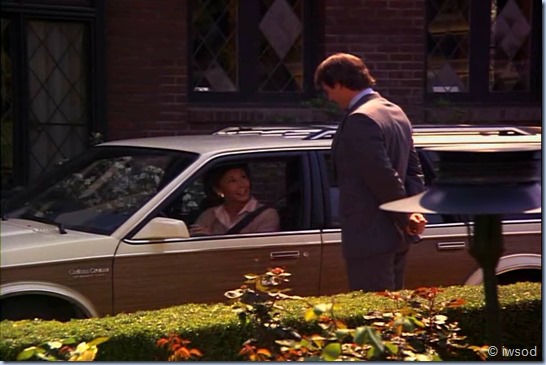 Byron: take care. Drive carefully.
Amanda: I will.
Amanda starts the car
Amanda: b- bye
Byron: b- bye.
Amanda drives off, and Byron watches her leave.
There is a lot of ‘watching people leave’ in this episode no??!! First Lee and Byron watch Amanda leave, then Amanda lingers to watch Lee leave, and now Byron watches Amanda leave.. interesting! An episode of goodbyes..

Sooo what do you all make of this little invitation?
According to what we’ve seen in the episode so far.. I think the writers want us to see Byron as a good guy. Billy likes him, Lee likes him.. and it seems to me that Amanda likes him- and I think we are suppose to like him. But I don’t like him!

Asking Amanda to dinner on her first day at work? Ugh.. that bugs me!!! He is moving way too fast and I think it undermines whatever he may think of her professionally and to me, it makes it look like this is all in aid of seducing Amanda.. you know.. the job offer, the double salary, the over the top praise, and now a dinner invitation?? to discuss ‘business’ though technically Byron doesn’t say its business- he says there are things he wants to discuss!! Maybe in the 80s this wasn’t cringe worthy.. but I think nowadays.. this guy is open to accusation of sexual harassment! LOL..

I think Amanda is interested in Byron, she seems open to his invitation, not at all hesitant about where this could be headed. Here’s an attractive, eligible guy with wonderful manners and good character references asking her to dinner.. she’s happy to accept. Not how I would have pictured her responding if she was indeed romantically, deeply in love with Lee at this stage – and another indicator to me that, other than in her subconscious- Amanda has not and does not consider Lee to be a potential romantic partner. She’s not on hold for him, or regretful about things not progressing there either- IMHO. She’s accepted it. I’m guessing others will see this differently… Do feel free to share your point of view!!

I think I use to see Amanda at this stage of the show as having stronger romantic feelings for Lee than I do now.. It’s going to be interesting to see how this impacts early season 3! I really don’t want to see Amanda accepting Byron’s advances – I think he’s a slimey boss to be asking her out first day on the job.. but in smk verse – I think he’s suppose to be a good man and Amanda likes it so.. I’ll move on!

Next… we see the evil country side again! LOL! The agency is raiding a location in Sky Valley.

Lee leads Francine and some other random agents into position..
Lee: this is sky valley huh.

We see that Billy is leading another team into position also. They spot something moving in the bushes. A single form. Is it a Yeti? Big foot? Elvis? 😉 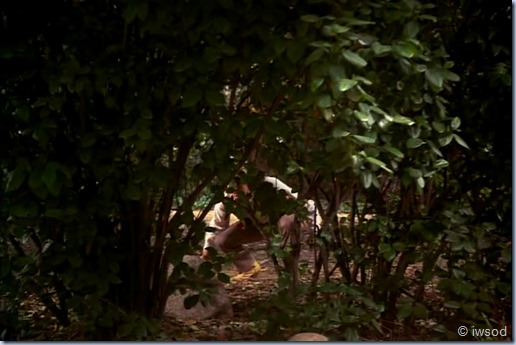 whooo this is exciting! Seems the agency is trying to recruit agents from all races and genders! gooo the agency!

nice variety in their ‘manpower’! 😉
These machine guns are too funny. All the agents seem to be constantly adjusting their shoulder strap!
Lee to Francine: you see that?
Lee calls Billy on the radio: Bravo 3 to Bravo 6 over. 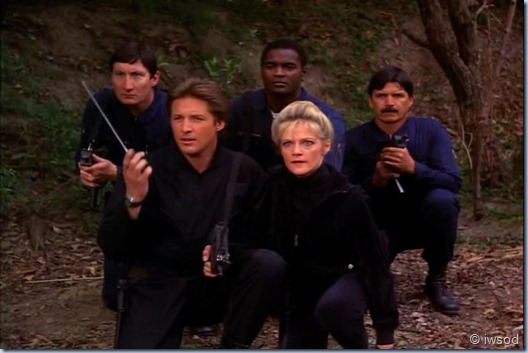 Billy: We read you Bravo 3.

Lee: something straight ahead of us Billy you see it?
Billy: I know. Pin him down in the crossfire and shoot at my command.

Billy collapses his radio.
Billy: let her rip!
All the agents begin shooting near the ground where the thing is moving. 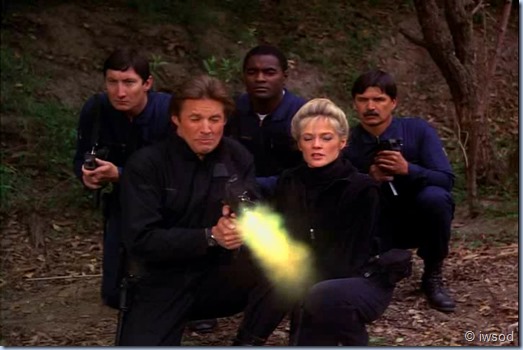 this shot of BB is too funny! Gosh didn’t Lee have training in shooting the doozie of an oozie? 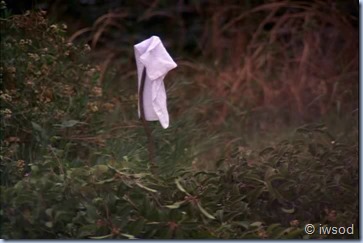 A white flag is raised on a stick out of the bushes in response.
Billy yells: whoever you are, come out with your hands raised above your head!

We see Augie stand up, wearing a cowboy outfit, and an extra large cowboy hat. LOL!!!

Both teams move towards him.
Lee: Augie! What the hell are you doin here?
Augie: Lee! Baby! [rofl! is that a play on Randi Baby?!]
…Am I glad to see you!

[I always found it strange Augie doesn’t try and crack on to Francine.. he’s such a  charmer.. ahem.. the script has him say to Francine here ‘You too my little heifer’ – rofl!!!! I would have loved to see Francine be called a heifer! tee heee.. The script has Augie in a cowboy outfit too.. why?? because they are in the country? I guess it’s random humour?! ]
Augie continues pointing at Lee: Nice outfits!
Francine: ahhhhh speaking of outfits!
Francine motions to Augie’s outfit in a ‘you look ridiculous’ way.. but Augie’s so deluded he can’t get it haaaa..
Augie: thank you ma’am! 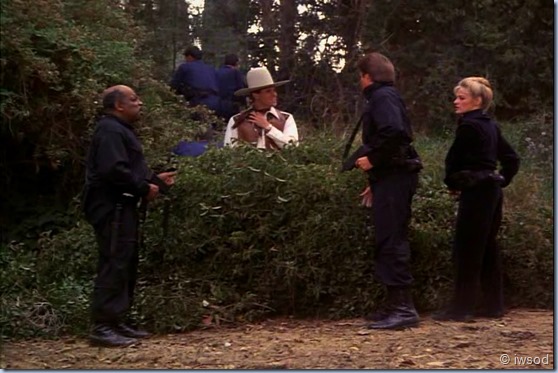 Billy: you know this person?

Lee: Yeah he’s one of my snitches.
Augie: I prefer ‘information broker’ !

He turns to Billy, smiles and holds out his hand
…The names Augie Swan.

Billy refuses his hand, scowls at him and growls : Get out of here!

[ROFL! Billy is too funny here! treats Augie like he is a squashed bug or something!] 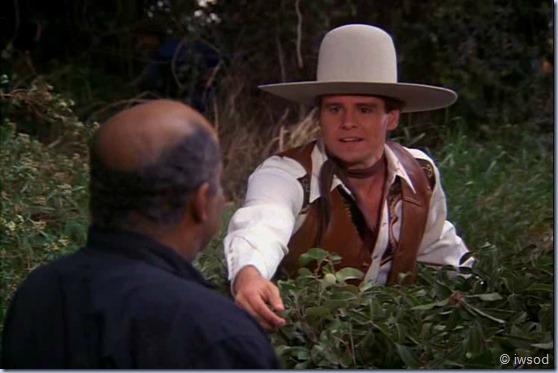 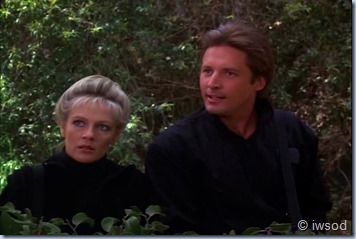 Lee: come on! What are you doin here?
Augie: well the word was down on the street that

there was some dudes training out here somewhere and they need some supplies.
Lee: what kind of supplies?
Augie looks sideways: Camping! haa!

Lee growls at Augie and grabs his hat! 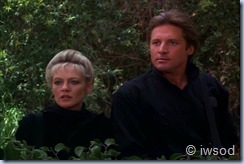 Augie: Hey! I just bought that hat!
Lee: oh. You like this hat huh!
Augie: hey that’s not just an ordinary hat, my friend!.. 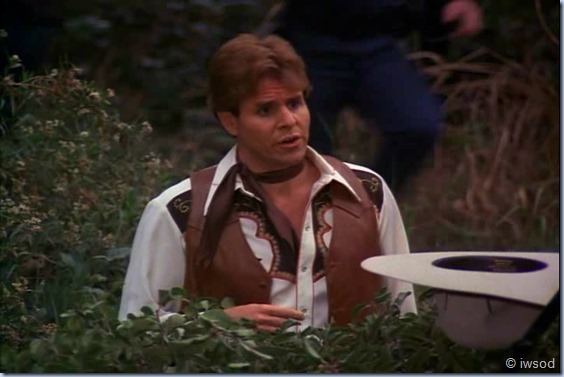 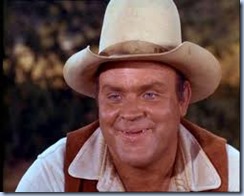 called Hoss Cartwright – he was a gentle giant.. played by an actor 6 foot four.. Hmm that explains the size of Augie’s hat! LOL! Here’s a pic I found..
Anyone able to explain Augie in the cowboy outfit??

Lee: Ohhh is it? Well, you better be hungry my friend because you’re gonna be eatin this Hoss Cartwright 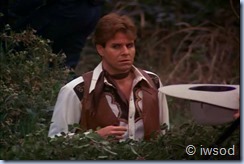 original if you don’t give me a straight answer. Now come on! What are you doin here? !! 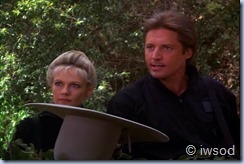 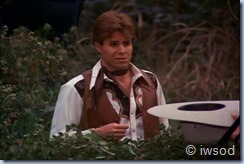 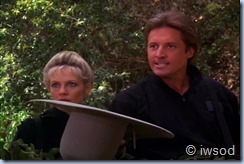 Lee throws the hat at him: You!!!!
Augie: Okay okay! Okay now, don’t get all bent out of shape..
(he pauses a moment)

.. I heard they were lookin for some flame throwers and I happen to have some! Cheap! 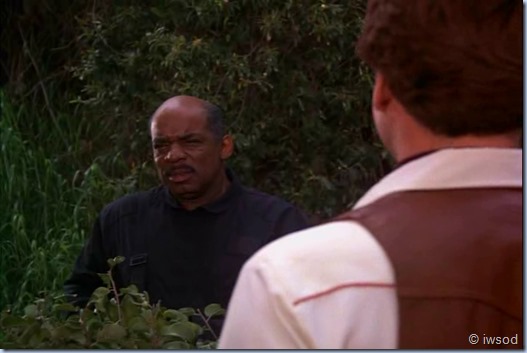 Auggie: Hey, you need some? Listen they’re great for cookin outdoors with! Fast too!

Lee through gritted teeth: come on come on! This is important! Now you tell me straight. Do you know anything about the guys 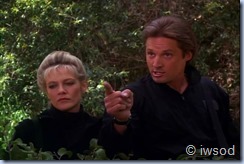 who were training out here? Anything at all!
Auggie: the word is that they’re not very nice people. 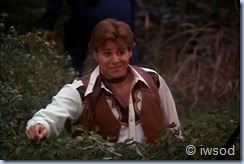 Lee, Billy and Francine share a look. That’s all they’re going to get from Augie.

Lee: thanks for the insight.

Augie: Hey, anytime I can help my country! 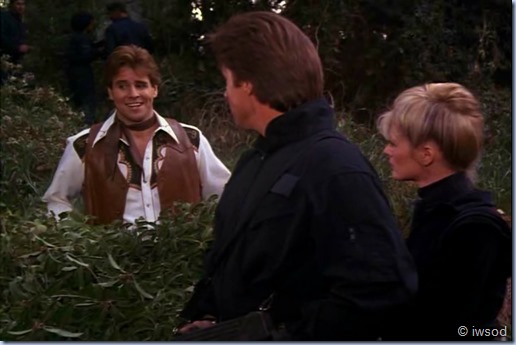 Lee turns back to face Augie and gives him a look, then leaves. I don’t know Bonanza well, but is that a little bar of the Bonanza theme music we hear as the scene ends there?? anyone?

LOL okay so all that little diversion achieved was we learned the baddies were looking for flame throwers, and are not nice people.. and had a giggle over Augie’s hat.. LOL.. oh wait.. what am I saying?? We did get to see action Lee in the black jumpsuit in the great outdoors!!!! Hooo haaaaa!!!! Me like!!!

Moving on.. and we have a lovely night exterior of the

Jefferson memorial. I do love this shot.. and love to include it whenever we see it!

I wonder if Amanda can see it out her office window

after all it is on the Potomac isn’t it?

I just went and had a look at that wonderful scene in the First Time, where Lee and Amanda talk on the steps of a monument. I was thinking it was the Lincoln monument – but!! I had it confused..  they are actually here at the Jefferson memorial. Interesting.. and it was such a poignant scene where Lee’s loneliness seems to come through.. Awh!!! Lee has come so far now!! 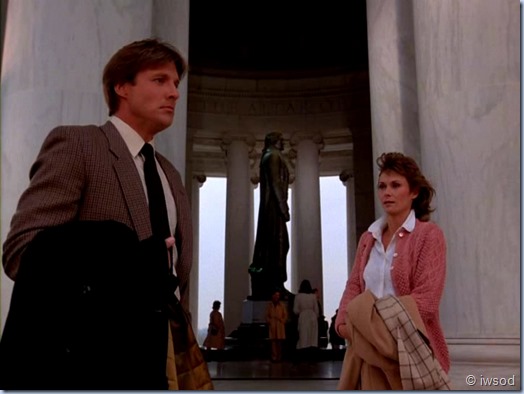 I wonder if it is deliberate that they chose to show an exterior shot of this monument- given the conversation Lee and Amanda first had there.. Where the story is at in this episode.. and the scene that’s coming.. whooooo.. Next up is the ‘business’ dinner! Brace yourselves!! 🙂
Any Bonanza fans who can explain Augie?! Love to hear your thoughts on what we’ve covered so far anyone?? everyone??! byee for now!