I live in New Zealand and (for my sins

) I have been in real estate for the last 11 years. Given my “expertise” Iwsod thought it might be a good idea for me to write a post on Amanda’s house.

In this first post I have covered 4247 Maplewood Drive and the neighbourhood as it appeared in the first two Seasons. I expect to do another post at the end of Seasons 3 and 4 on the same topic – it will be interesting to see what changes and what stays the same as the series proceeds. There was plenty of material to work with in the first two seasons and it’s such a zany neighbourhood I’m sure there will be plenty more to comment on at the end of Season 3.

In the meantime, I hope you enjoy this post and feel free to add comments and point out anything I might have missed.

First off, let’s be clear, this is Amanda’s house : 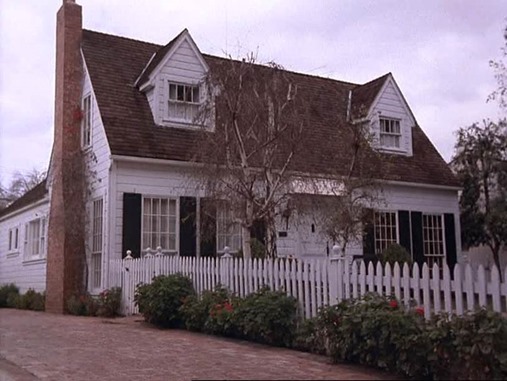 This is not Amanda’s house (but it does feature in the opening credits of every episode of the first two Seasons) :

General Disclaimer : My forte is New Zealand houses, so if I get anything wrong or I use a term you are not familiar with, feel free to correct me or ask me to explain.

I believe Amanda’s house is what is referred to as a “Cape Cod” style home. We have a version of this sort of home in New Zealand, although they are not that common compared with other styles of houses. In the real estate industry we often refer to them as “dolls houses” or sometimes “colonial style”.  Most of this style in NZ were built in the 1970’s through to the early 1990’s (see pic below as an example).

I’m not sure how to date Amanda’s house – I notice a chimney (or possibly two chimneys) so it would have been built with open fires, so does this date it to most likely prior to 1960’s as it would in NZ?

The sash windows in Amanda’s house make me think of 100+ year old houses as those windows are typical of New Zealand villas of the 1870-1920 period. 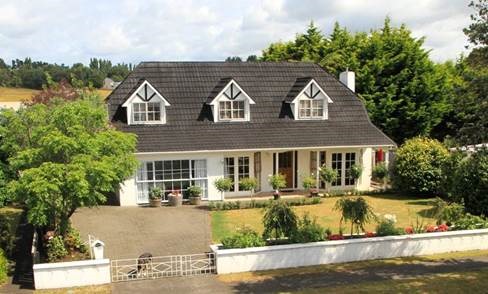 A 1970’s era New Zealand “Cape Cod” style home with hints of Tudor and Colonial influences. In other words, a typical New Zealand mash-up of styles and eras. (And it looks like the original garage has been converted into a room as well – lower left hand side of house.)

Briefly, 4247 Maplewood Drive features a medium to large medium size 3 bedroom home with two living rooms downstairs (is one of them what Amanda calls “the den”?) and I assume 2 bathrooms upstairs.

There must be a downstairs toilet at least and possibly a shower too, but more about that later. At a rough guess I would say 180 to 200m2 floor area, excluding garaging. I’m thinking NZ sizes here – maybe being American it’s larger than that?

So, let’s start at the Front Door.

There is only one ongoing anomaly I noticed and that is the odd cover that sometimes appears over the door. I thought it may be a pull-out or wind-out awning – used in the colder months to shelter the doorway a little from the weather? Whatever it is, it doesn’t look like it would provide much cover. 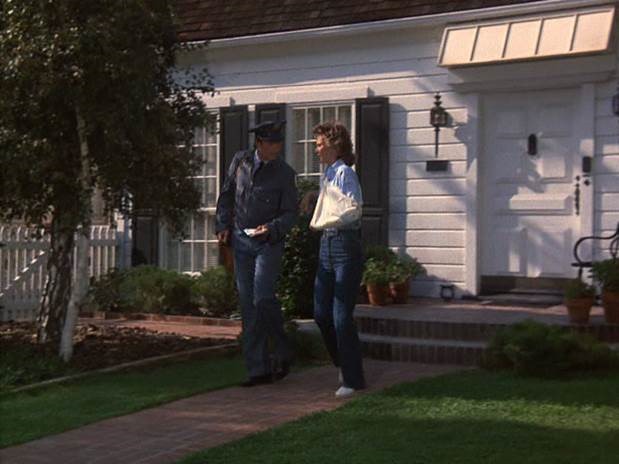 Even Lee is wondering what it is :

Thanks to BJo who spotted a random one-off anomaly in A Relative Situation – a weird eagle-like motif over the door.

What do you think?

For a reasonably detailed view of the front door area, here’s Amanda stepping out with Art Garfunkel,

errrr, I mean Artful Dodger. She even has a boot scraper at the front door. Wonder if she had one at the back door for Lee after all the tramping around he did in Dotty’s flower beds? 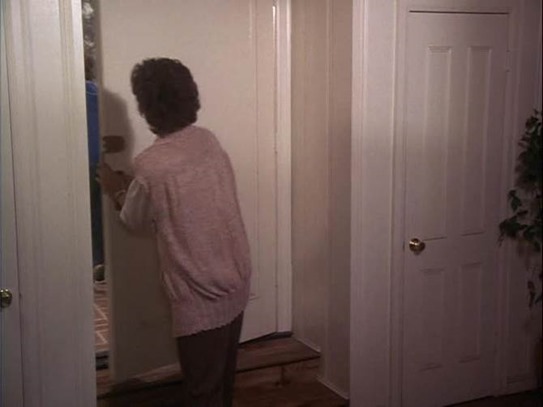 This is really quite spacious but with all those steps it’s a real nightmare for the mobility challenged and a crazy tripping hazard even for the able-bodied. A trend towards sunken lounges and split level homes from the 1960’s to 1980’s in NZ saw many homes built with step-ups or step-downs where a level floor would be the preferred option today.

<<Check this out – how is it that Amanda doesn’t have water flowing in her front door when it rains. The outside pavement is higher than the level of the interior, which in turn features two steps down. There might be a small lip on the edge of the paving but this wouldn’t be enough to stop the water in a real downpour. Not to mention why would you want to be on a lower level than the person outside when you are answering the door?? Very odd.

The closets either side of the entrance door are handy storage for coats and jackets, bowling gear and of course the occasional knife wielding criminal.

The interior lay-out Amanda’s house can seem pretty darn confusing so Jeanine’s floor plan was an invaluable resource for me during my research, and is helpful to include here for readers. The original plan can be viewed HERE

Apart from scale it was pretty accurate but as I researched this post I noticed that something wasn’t quite right in the plan and I began to notice another small nook between the laundry and family room that has an outside access door. I have overlaid some features on Jeanine’s original plan. None of this is to scale and I haven’t drawn in all windows, etc. Although out of kilter it does give us a good idea of the floor plan. One day when I have oodles of time to spare (in other words, when my Lotto numbers come in) I will draw this up properly as close to scale as I can. I the meantime, if anyone out there has drafting or architectural drawing skills, feel free to volunteer for the task.

The two rooms we see most are the kitchen and “family room”. What I call the family room is the living room adjoining the kitchen – not sure what it would be called in the US. I would call the living room on the other side of the house, which we don’t get to see so much, the “formal lounge” (more about that later).

The Kitchen and Breakfast Nook

Amanda did some significant remodelling to part of the kitchen after Season 1 – maybe that’s why she was having cash flow problems later in Season 2 – overspent on the remodelling?

The oven which was originally situated on an angle by the breakfast nook has now moved along to form part of the wall between the kitchen and laundry rooms. Early in Season 1 she got rid of those ugly lights over the island bench and she moved the blue and white planter from next to the oven to the wall over the bread bin. No doubt she moves lots of stuff around but she has so much “stuff” it’s hard to keep track of it all. Time to de-clutter Amanda! 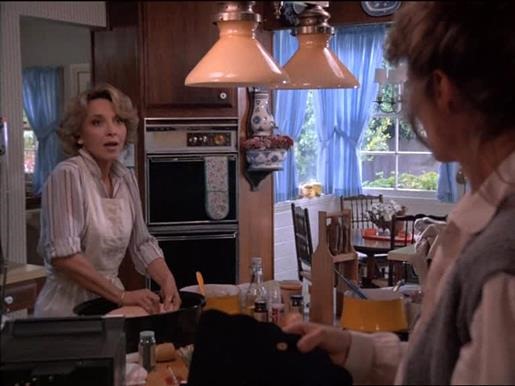 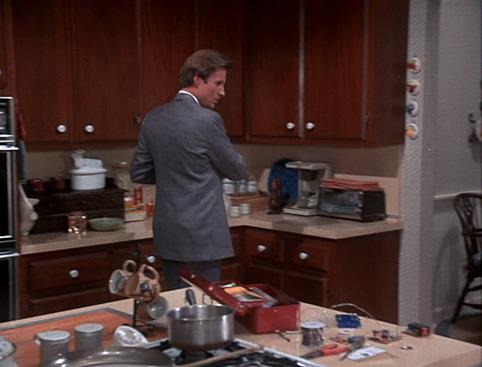 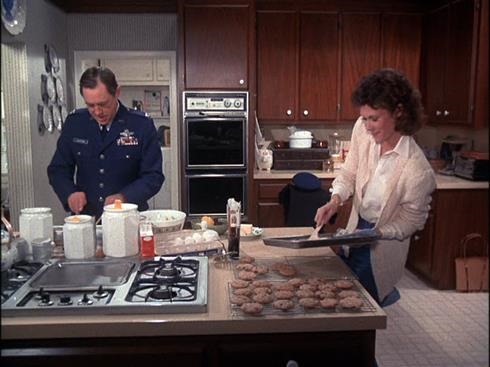 Here is the Season 2 remodelled kitchen. Notice the view through to the laundry room behind the Colonel, and L-shaped cabinetry next to the breakfast nook, where the corner oven used to be.

The rest of the kitchen stays much the same throughout with the exception of ornaments and other stuff being re-arranged from time to time.

Hey, here’s Amanda and Lee looking quite domestic in her kitchen in ROTP. Interesting stable type door between the kitchen and formal dining room. (Not common in NZ homes except for a few built in the 1970’s).

And we don’t often see the breakfast nook from this angle, looking back into the kitchen.

From I’m Not Now… a view of the other end of Amanda’s kitchen, which remains unchanged.

Looking back into the formal dining room. There are those icky lights from TFT. They are a real distraction which probably accounts for why they disappeared immediately after TFT. 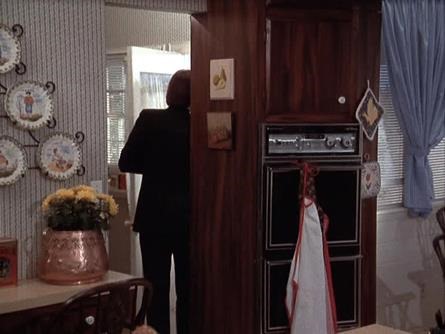 The wall the plates are displayed on here in S1 is where cabinetry housing the oven is located in S2. Notice Lee disappearing out the side door onto the driveway side of the house. 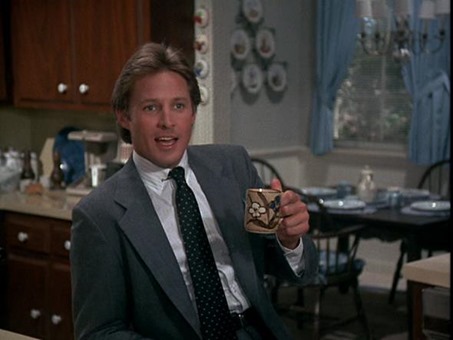 If you can look past the eye candy here, you’ll notice cabinetry where the oven used to be, and (below) the wall oven now located on the wall in front of the laundry.

This cabinetry also closes up the other doorway into the laundry/driveway side entrance door that we see Lee using above.That triangular set of display plates gets moved around a lot!

The main changes here between the S1 and S2 are the installation of bi-fold doors (I think called pocket doors in the US?), and a window instead of cabinets in the nook at other end of the room which also has a side door onto the patio/gazebo area. (This is in addition to yet another side exit door out of the laundry.) 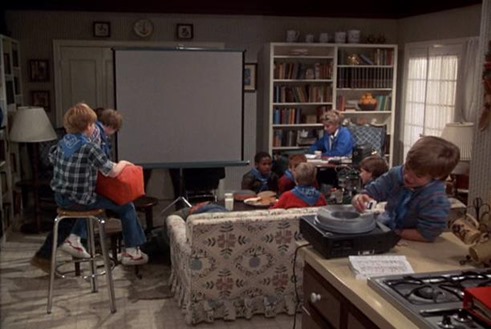 New or re-covered couch, less bookshelves and now a door through to the formal lounge, vinyl flooring with a smaller rug too. The bookshelves move a bit as we also see them further along the wall from the French Doors.

Now let’s check out that often seen but very confusing side exit door tucked away in a nook in the family room.

Here it is early on with some cabinets in the background. The same door later on features a window where the cabinets are, just out of shot to the left side in this pic with Amanda standing outside.

Confusingly what is apparently the same door with Lee standing outside has a straight wall and window instead of a corner, or is Lee looking into the laundry door but that does look like the family room through the window beside him – it does get very confusing.

I’ve included lots of photos so you can see it is definitely meant to be the same door, but the exterior does seem to change. Maybe two different stage sets? Playing Possum has a good exterior scene showing Amanda coming out of this door and past the laundry door. 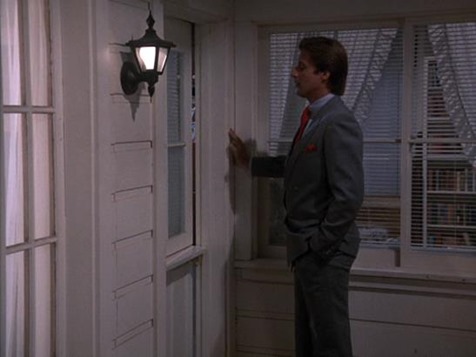 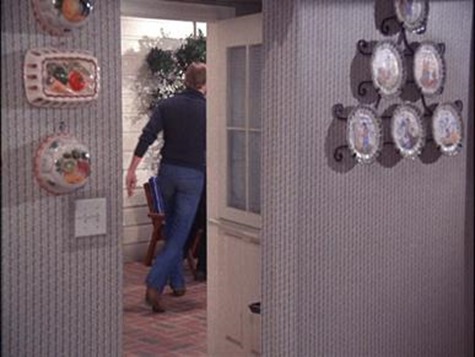 Any comments? thoughts? questions?? feel free to share!!
Next in part 2:
The laundry, the formal dining room, the formal lounge room, the stairs and upstairs, heating, the garage and the neighbourhood.

This entry was posted in General SMK, Guest Contributor, Season One, Season Two and tagged Scarecrow and Mrs King, SMK. Bookmark the permalink.