The next day and Lee enters Billy’s office..
Lee: Billy, you got anything new on Pamela’s murder.
[Umm why doesn’t he ask about Cheryl’s murder too?!]

Billy: Yah, the Ballistics Report. It says the same gun that killed Pamela Densmore killed all the others.
Lee: And I think Serdeych pulled the trigger.

Billy: Why?
Lee: Because the Wizard is closing in and Serdeych is doing 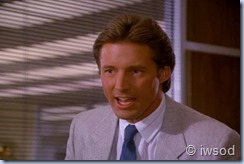 everything he can to destroy the Oz Network, which he tried to do 10 years ago!
[oh interesting.. at this stage, Lee is seeing things quite clearly.. in spite of the angst over all the women being murdered..or.. is he? I had forgotten about this!??]

Francine: How do you figure that?

[Hello.. I would have thought this is the obvious conclusion to draw!]

Lee: Because I think Serdeych was a member of the Oz Network.

[okay, I can’t pretend I don’t know who is behind these crimes! Interesting though to hear Lee sounding on 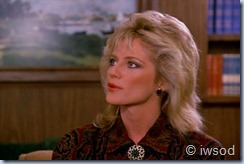 the money! maybe more than he realises..]
Francine: Lee, aren’t you forgetting that Paul Barnes cleared everyone on that operation?
[so what.. so no one has turned dirty before?!]
Lee: No! No I’m not. 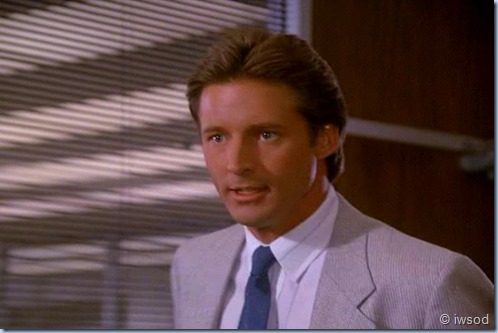 Uh oh.. maybe Lee is not thinking so clearly after all! Lee is looking mad here no?
With this, Lee the action man leaves Billy’s office..to do something!! without forgetting Paul cleared Serdeych!! 😉

[what does Lee mean? hmm I guess we shall see.. does he think they are in it together? or that Serdeych is the wizard at this point? Amanda has a wizard in her family.. does Lee know that? You know.. Uncle Iggy? 😉 ]
Billy and Francine share a look once Lee has

left.
Billy: Keep an eye on him.

Keep an eye on him? I guess we are being told here that Lee is heading into dangerous territory with this personal stake of his?

Interesting that Lee seems fixated on Pamela’s death.. as opposed to the others, and not even the most recent – I’ll put this down to Lee really being fixated on Dorothy- but he is displacing this onto Pamela so he doesn’t have to admit it to others

The camera cuts to Lee stylishly waiting for a computer to spit something out. Sure stylish!

Just look at that pose..
Didn’t he do that at the top of the stairs in The First Time??
Lee is Mr Intensity too… the music tells us this.. and the way Lee rips the paper out off the printer?- take that printer! that’s for making me wait two seconds.
Personally I say thanks printer- it gave us a moment to admire intense Lee

Next thing, we see a funny light being pointed at someone.. how ridiculous! 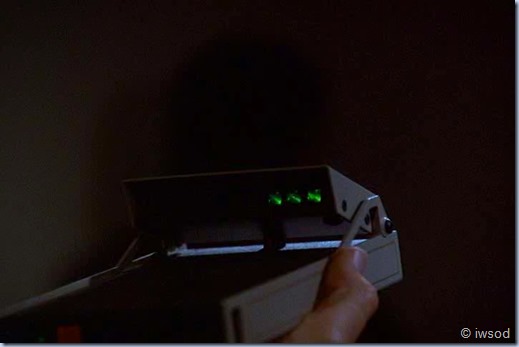 Ahh I see.. it’s Paul being grilled by Dr Pfaff and Billy..(I don’t think the light does the grilling, I think it tests if Paul is well done!) Is this the usual ‘annual’?! lol..
Paul: I don’t know what you want. I can’t get anymore specific!
Billy: You’ll have to try. 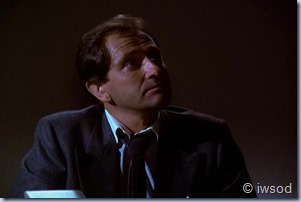 promised to deliver Serdeych, maybe you were just a little too – eager. Even, unrealistic.

[What was it burn out Lee said? no one bats a thousand all the time.. Is Pfaff trying to be

Paul: Have you ever been in the 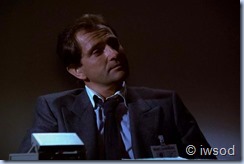 field, Pfaff? Have you ever worked a string of agents day and night for a year? 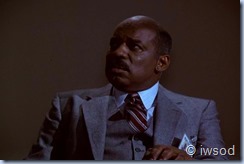 …With a knot in your stomach the size of a grapefruit every time there was a phone call,

or a knock on the door. Huh? Because if you had, you’d know it takes time, and patience – something in short supply around here…

[Interesting.. maybe Paul is not wrong about that.. Still with 10 women killed and counting? Patience may not be possible any longer! I think Paul is completely disconnected from the death of these women.]
…And if that voice analyser is telling you that I’m a little stressed out, it’s right!…

…Because every day I waste my time jawing with “soft hands” like you, I lose a day on 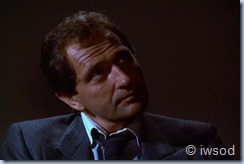 …And believe me, he doesn’t need much. I promised you an hour and gave you 70 minutes. You owe me 10. 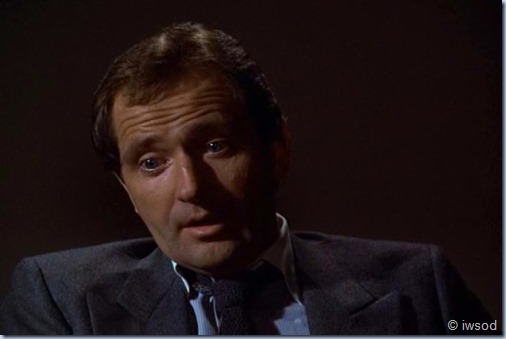 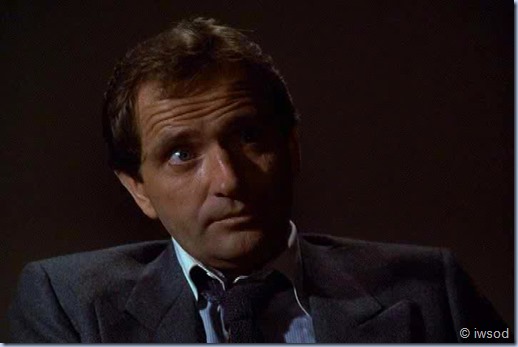 [No kidding… derr Ragmop could have told us that! Next thing you know the doc will stand up and shout- Harry is Kolinsky!! 😉 ]

Right.. okay so we learn a little more about Paul here.. the burn out rumour about Paul seems to be close to the truth. Is he stretched tight enough to be dangerous?
Okaaaay, I find him less cold-hearted now.. and more obsessed with his work! No wonder he has tried to switch off his emotions – or maybe he hasn’t tried.. maybe it has happened as a result of all the stress he couldn’t deal with anymore so his emotions shut down?

I find him sad – he needs help.. Is Lee going to offer it?? Hmm.. we’ll see!
Paul has a lot at stake here.. his legacy even.. and it seems Paul has chosen to be the lone wolf in bringing down Serdeych. He seems to have given up trying to recruit help.. then again maybe he doesn’t see anyone who can help him if everyone is challenging and questioning him!

Amanda is trying to access the oz network file-love how the file code finishes with ‘BB’ !!
[LOL you’d think with everything going on at the moment she would have been immediately held at 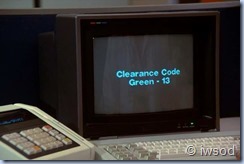 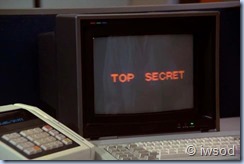 TOP SECRET flashes on the screen with an alarm.. oh dear.. the ERA button again dear?

The supervisor there looks around wondering who is accessing something top secret..

and Amanda panics.. lol she looks so guilty! Is it just me or does she look around like it is someone else’s computer making that noise? oh well.. the guy doesn’t seem to notice her!

Computer (which sounds like a dalek!):  Verify, or Security will respond.
(Exterminate!!)

Uh oh.. the computer is counting down. hurry Amanda!! A quick swipe of the magic green clearance card. 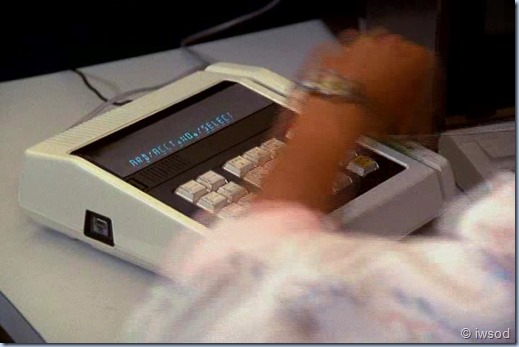 Phew.. just as the supervisor arrives ‘clearance: Francine Desmond’ disappears from the screen! whoa!! Go Amanda!!Hutchinson: Everything copacetic Mrs King?
[I had to look up Copacetic.. I’d never heard of it!] 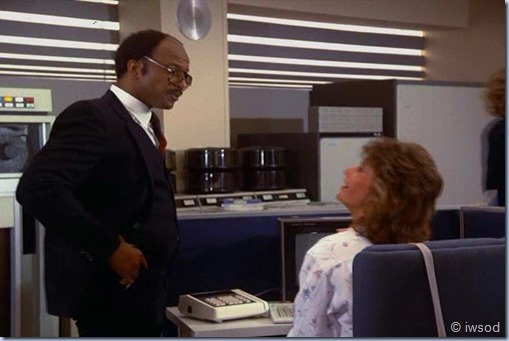 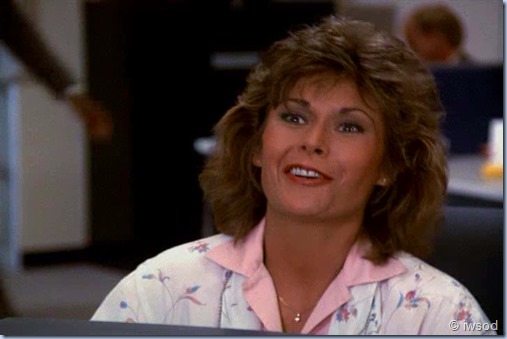 We cut to Paul heading for the elevator.. Uh oh.. Lee has found him.. and seems to be mad! This is very unfortunate timing! Lee is upset.. and Paul is all worn out- from chasing Serdeych, and defending himself with Billy and Dr Pfaff!

Lee: I want to talk, Paul. (you can just make out Lee in the foreground here as Paul walks past him- Lee is looking down at the papers not at Paul when he says this) 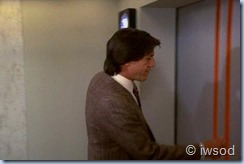 Paul tries to give him the brush off.. :  Later Scarecrow, I’ve had about all the talking I can do for today.
[Maybe Lee wouldn’t be so mad, if Paul had made an effort to talk to Lee about the case- he seems to keep brushing Lee off.. which has only made it worse. If the two of them did talk, and calm down they would maybe be able to figure things out!]
Lee: Now!!!! 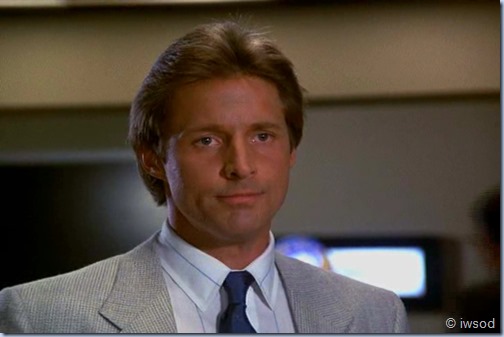 (Paul turns to look at Lee surprised by the venomous tone)

…Now I ran location check on those murders over the past six months. Cross-referenced it with your travel itinerary…

…There’s a perfect correlation here. You seem to be in the right place at the right time – every time. 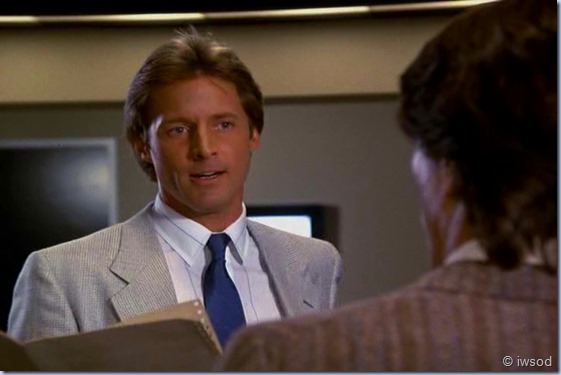 [Uh oh.. but Lee.. every first year psych student learns: correlation does not equal causation! There is a third variable at play here that Lee seems to have written off: Serdeych!]
Paul: Meaning?

Lee: Meaning that’s a big coincidence, Paul. Now what the hell is going on here?

[Would Paul be that blatant or that stupid? I don’t find the guy warm.. but nor do I find him stupid!! Lee is all emotion now..]

Paul: I’ll tell you what’s going on Scarecrow. I’ve been fighting for my life ever since I got to this place with a

bunch of flabby suits who wouldn’t mind shutting down the most effective network this Agency’s ever known! And I don’t need guys who ought to know better taking cheap shots at their own.
(here we see Amanda arrive in the background.. taking this all in.. btw- I hate this outfit on Amanda!!!!)

[Paul’s ego seems to be at stake here too.. uh oh!.. this whole exchange is an unfortunate crossing of paths.. wrong place.. wrong time!]
Lee: You call that correlation a cheap shot!
[LOL.. I would! ]

Paul: You want to talk about a correlation? 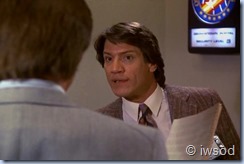 Those women who were murdered were YOUR women! Explain that!
(Paul whacks the sheets out of Lee’s hands.. Does Paul think Pamela was one of ‘Lee’s women’?!)

whoaa.. Paul is a fighter!! provoking Lee here- Paul is really on the edge.. but also- I think he’s pretty tough and feels he can take Lee! 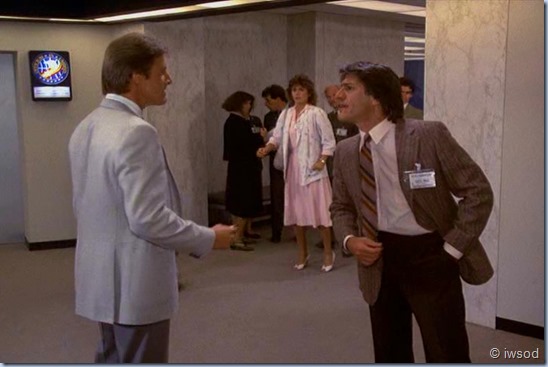 As they get ready to fight, you can see Amanda in the background… urging Billy to come towards her and- do something!! 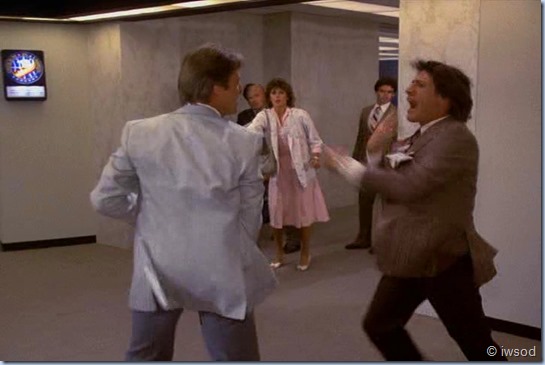 He doesn’t seem mad with Lee, not to me.. This is very unfortunate.. the men could have been a great team to deal with this – but seems Serdeych’s plan is so far working perfectly- oh dear.. I am no longer thinking like I don’t know who is killing the women. very naughty of me! umm..
Billy to Lee: …What is going on?

[Phew! thank goodness Billy was around.. Where was Francine? I thought she was to ‘keep an eye on him’! ]

Lee: Nothing!!!! (Lee stops yelling and gets control of himself.)
…Just a little misunderstanding, that’s all.

[okay everyone.. why doesn’t Lee tell Billy about the perfect correlation?? why does he cover it up?]

Billy: We can’t afford any “little misunderstandings” around here Scarecrow. 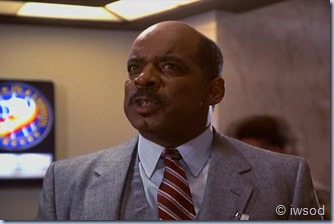 You take the rest of the day off and clear your head! That’s an order. [well technically the scarecrow had a very clear head.. after all he was brainless

at Paul if he gave me a codename brainless too

Amanda: Lee…
Lee: What are you doing here? [lol!!! what a nonsensical question!! He’s pretty upset! All in his limbic system!! Clear thoughts? gone!]
Amanda: Well, I was just doing some routi-

Lee takes Amanda by the elbow and leads her to the elevator.
Hmm maybe we’ll find out why Lee didn’t tell Billy next up.. but for now.. I’ll need to finish here!! As always, I’d love to hear your thinking! byee for now!!!