We see Lee and Amanda meet up again..
It seems Amanda was walking out (to get away from Craiger and men hassling her) and then happens to come across Lee.. Lee seems ready to leave and no longer playing his cover (that cover of  pretending he’s not with Amanda

).
Oh wow.. we actually see one of those women Lee said hello to earlier walk past Lee and Amanda as they rejoin each other

– and Lee?? Only has eyes for Amanda.. doesn’t even notice the woman walks past.
[What if she’s a baddie?! Lee doesn’t care

[Okay it could be because she is now just a random extra.. but I prefer to think it is meaningful- Lee prefers Amanda

Am I deluded? quite possibly!

do I mind? nope.. quite happy with it.. and my smile is probably quite scary.. if you know what I’m saying 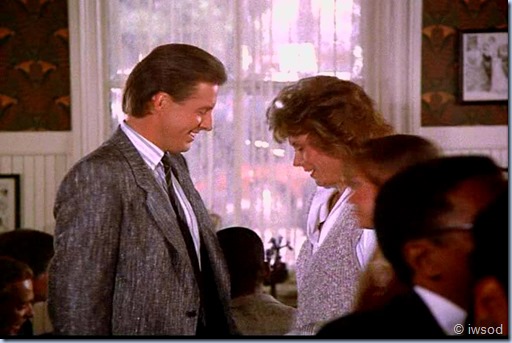 (she seems to let out a sigh as she finds Lee.. relief maybe?)

[Amanda turns back to look at Craiger- I guess she’s thinking about the dating game on M street..
Seems Amanda has chosen not to tell Lee about Craiger.. why do you think that is? ]
Lee: Amanda, you have got to relax. 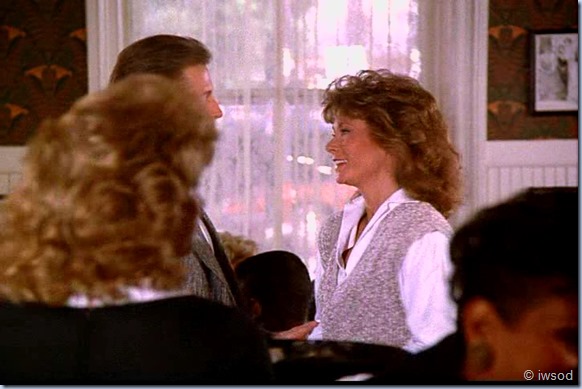 [I can just make out that Lee touches Amanda’s arm-those darn extras keep walking in front of them again! To comfort Amanda because he can see she’s stressing?? or maybe to get her attention focused back on what he’s saying… I love that Amanda is smiling here but Lee knows she’s stressing anyway – awh..]
Amanda: I know,… 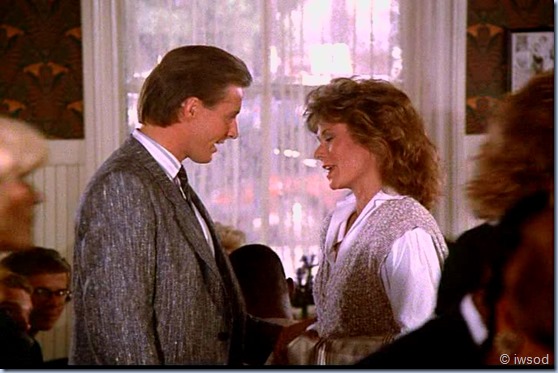 …I feel kind of like a piece of bait on a hook.
[I like that Amanda is honest with Lee here.. I do think this is what’s going on with her.. she’s feeling uncomfortable with being the bait on the hook. Lee seems to smile a little.. I think he likes this about her too!

what do you think??!!]
Lee seems to suddenly remember they are suppose to be playing a cover (oh yeah- bait on a hook!).. and looks up and smiles at the room as he responds: Well, that’s what you are, remember? 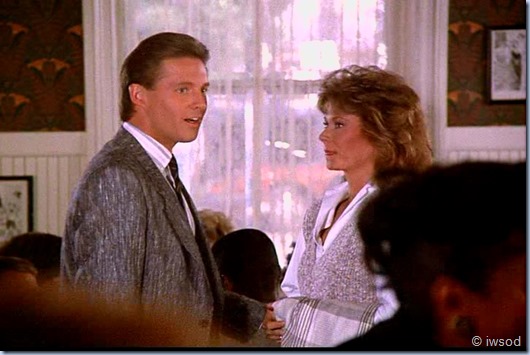 [Lee doesn’t sugar coat it.. lol.. I think this is not about Lee here, it’s about Amanda needing to get use to this part of the job.]

Amanda: Well, I know, but it’s just, it’s a funny feeling… it’s not something that I’m really- (Amanda notices something on the other side of the room that catches her attention.. so she stops mid sentence) 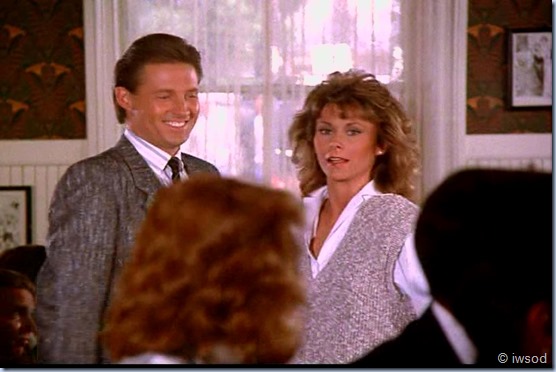 – I’ll pause here briefly before we continue. I can’t see anything here that indicates a problem between Lee and Amanda – how about you? I think if Amanda was not happy about Lee smiling and enjoying himself that this is not something that has really upset Amanda.. but I do think she has noted it – and has taken something away from this observation.. what? I’ll share this when I think it is revealed

The whole talking up of M street for me in this day and age seems silly – I know.. I gotta remember this is the 80s.. but even in the 80s I don’t think we see anything terrible happen on M street that we didn’t already see at an embassy party – maybe the pick up lines were slightly more classy – that Amanda reminds him of a portrait!

gosh. what episode was that? Umm was it Dead Ringer?

I think this episode implicitly says M street is suppose to be a place where ‘good girls’ don’t go.. It’s where men and women go to hook up.. (or as Francine says do Karate!) but while Craiger wasn’t a charmer, I don’t think he was being offensive – not like men in this day and age who in meat markets can be very offensive (IMHO). It’s not edifying, so I won’t go there.. but I think I would have been okay with M street in the 80s.. but the version of M street of today kinda turns my stomach.. Maybe it’s just me..

I can see though that 80s M street is not something Amanda is use to. She is use to attention from men.. but for some reason this full on dating game on M streets makes her uncomfortable. Maybe because it is more of a hooking up vibe than a dating vibe?
I wonder if we have the same vocab here – to me hooking up is basically finding someone to ‘play backgammon with’ and then say bye bye! Dating can be that too.. but with more of an intention (or pretence of an intention!) that there could be a longer term relationship in the works! lol hope that makes sense.

Okay, back to the episode.. so Amanda suddenly stops mid sentence as she notices something on the other side of the room.

She keeps looking a moment.. then gets Lee’s attention.. 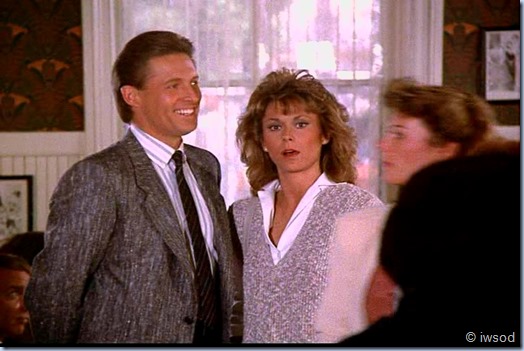 Amanda: – Oh, look at that.
We see Agnes is standing across the room, with Nick. She gives Amanda a little wave..

Lee: What?
Amanda: Look at- There’s Agnes.
We cut back to Lee trying to look without looking like he is looking.. but Amanda just full on looks and points! whwhahahaaa..

Why can’t Amanda point- Agnes just waved to her.. ugh! Lee is talking all quiet and trying to act cool.. my goodness Lee- Agnes just waved at you in front of Nick Cross… I think it’s more suspicious to pretend like you don’t know Agnes lol!!! Oi! don’t shush Amanda!

Lee: That’s Nick Cross…
(too late Lee! Agnes has brought attention to you. Gee if Lee had said that name back at the meeting.. this episode could have ended much sooner 😉 )

… The guy my editor friend told me about. (Well gee, then why have you been standing there for 2 hours?! Go find Nick Cross already!)
Amanda: You’re kidding.

Lee: Shh. Stay right here, hmm?
(Nick is looking at them still and increasingly worried.)
[ but why? does he know Lee? ahhh I guess Agnes said- whooo there are my coworkers at the agency!]

Amanda: Okay.
Lee: Hah.
Lee tries to play it cool.. smiling, he starts to walk slowly toward Agnes and Nick.. 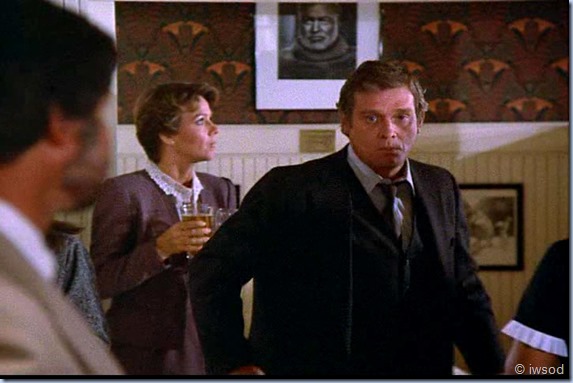 He starts bolting for the door..

Lee bolts after him, pushing a woman out of the way (sort of) and almost knocking over a tray of drinks.. Lee tries for speed.. but seems to also be careful of those around him.

Agnes watches after bolting Nick and chasing Lee.. surely she would be starting to question what’s up. she knows Lee is working on these leaks, she knows he was headed to M street with Amanda.. where the leaker usually hangs out.. and when Nick saw Lee? He bolted!!! hello??!!!! (Poor Agnes)

We cut to Lee out in the alley.. searching for Nick.. but he has nicked off!