Back to the interior of the corvette (LOL how did Lee get it out of the impound?! especially without getting into trouble from Gino

)
Amanda is holding up the homing device receiver…

LOL I was confused and wondering if the homing device is a radio too.. then I realised they seem to look at Lee’s car radio or something when they hear the announcement.. I guess they were just holding up the device in the hopes of locking onto the signal again.. Hmm..
Back at the warehouse.. ahhh looky.. Nick has himself a fireman’s outfit..

He throws another smoke bomb on the floor in the corner again.. lol I think they’ve re-used the previous moment of the smoke bomb going off.. but have shot it from a different angle and reversed it.. what do you think? Nifty!
Before:

Nick hits pay dirt, finding a file with a picture of a dead woman in it.. lots of blackmail material there!

Is that tape on Nick’s helmet?! covering the ID?So sneaky, a kinda cool idea that J.Edgar Hoover’s files were labelled ‘pension plan’  or something.. not many people would be interested in those files!
The fire brigade arrive to put out the fire!

[Love how the identifying labels on the back are taped over.. the wardrobe dept all out of LAFD jackets that day?!]
Lee and Amanda pull up at the warehouse..
Lee: I’ll find Cross. You check the security entrance, and be careful.
Amanda: Right!
they both take off in different directions..

Do you think this is a real downtown street? it looks it!!! Drat.. no Hollywood sign!! one of these days…

Lee approaches a fireman, flashes his badge and says it’s national security (see now when Nick said it earlier he didn’t flash his badge!) – Lee says there’s a man and woman inside and asks for help with the equipment.. He can’t rely on a fireman to find them.. he’s gotta do it himself! 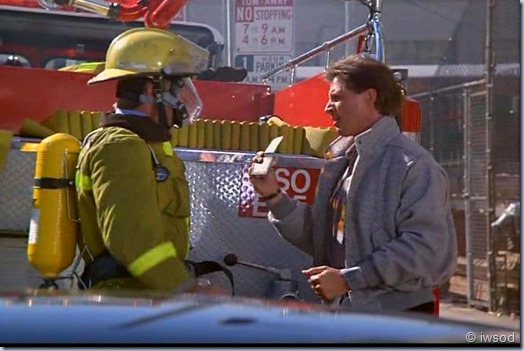 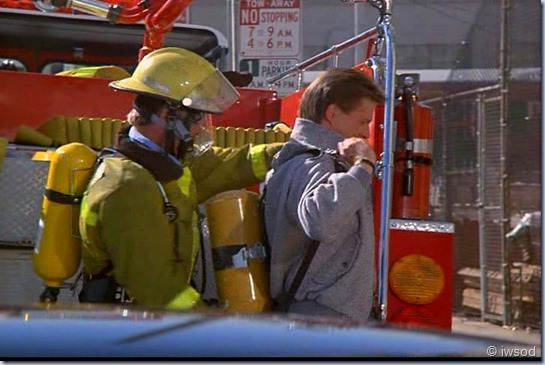 We almost got to see Lee in a fireman’s uniform!!!!
Nick is busy loading up the truck with files..

Lee uses the homing device to find Agnes.. Oh good.. so the homing device did actually come in handy in the end! Lee gives Agnes his mask so she can have a turn breathing oxygen..
Nick was pretty heartless to do that to Agnes.. and leave her struggling to breathe..

Lee unpicks the handcuffs (and it’s suddenly not smoky!)

Amanda (with her amazing luck!) finds Cross loading up for his getaway..  (and some incredible nachos) 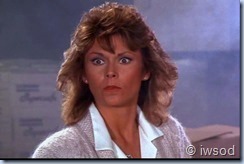 She cries: Leeeeeeeeee! Leee!!!!! there he goes!

Lee  runs after the van and shoots..

he hits the fuel tank and the petrol (ok ok.. Gas!) starts leaking out the back..
Lee and Amanda rush to the car- but Lee still has time to put a hand out and help Amanda up.. Lee calls to Amanda: Come on.
Amanda: All right.
Aawhhhhh what a keeper!! 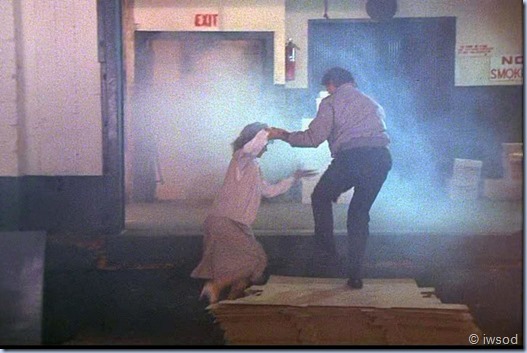 Nick sees he is out of petrol. He gets out and sees the fuel leaking

Okay – did you guys see the label on his jacket? this one is different! 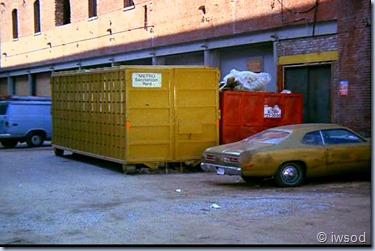 Nick hides the files in a container or something nearby..
Lee and Amanda find the corn chips truck.. 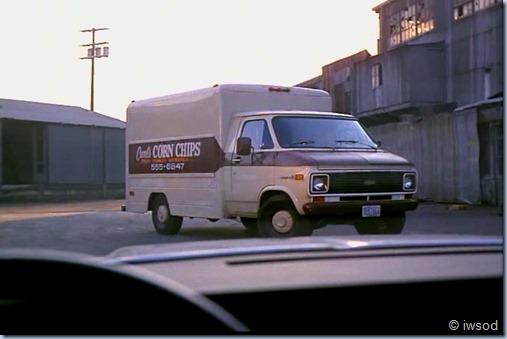 Nick can’t be seen..
Lee: Now you stay down. 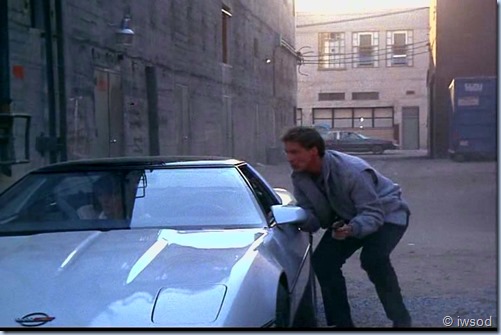 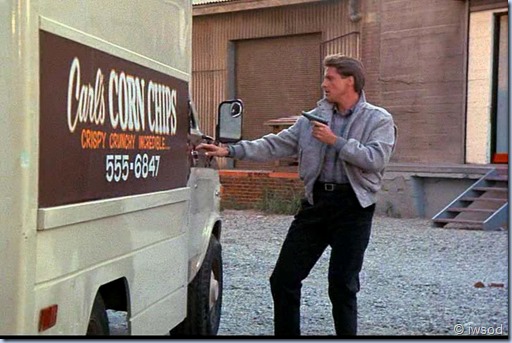 Amanda stays put in the corvette crouched down while Lee gets checked out Um I mean checks out the truck.
LOL.. Amanda sneaks a look 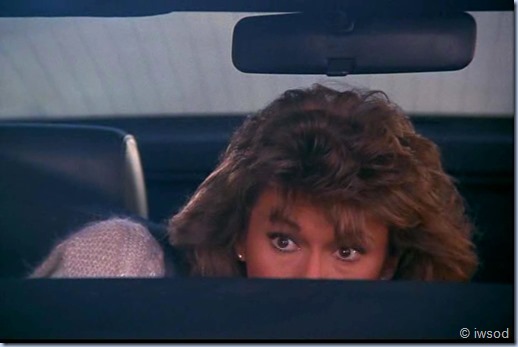 Me Like..  He looks mighty fine in this moment!

or the files!!!
Lee and Amanda share a look.. Yeah Lee, Nick bested you.. time to regroup.. and get smart! 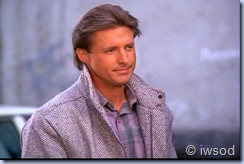 The scene ends there..

We cut to an exterior shot..

Anyone recognise this building?
Back to the warehouse, Francine is looking very uncomfortable in that jacket crouching and asking Agnes questions..
Francine: Agnes, where were the reports, do you remember?

oh rofl Francine’s jacket is hilarious!!
[why are they taking Agnes’ blood pressure?!]
Lee finds the smoke bombs and says Cross is a clever guy.

– yeah well I don’t think he was that clever (he didn’t need to be!), I just think you guys were kinda dumb about it haaaaa.. Love what Amanda says here in response to Lee saying he’s clever: (He’s ) cruel too. It’s unforgivable what he did to Agnes.

very true Amanda.. Get him Amanda!!
It’s so cruel of him, I can see why it might be tempting to Agnes to deny the reality of things..
Lee: Well, he’s done it to other women. A dozen times. The same M.O.

[Whoa, Lee knew this about Cross, and up till now had failed to mention it? I guess it was not a bad idea to keep this from Agnes

why rub it in.. even in being used and betrayed Agnes wasn’t special! It’s Castille all over again! ugh!!!]
Amanda: I feel so terrible for her.
Me too!!
Francine joins  Lee and Amanda.

Francine: It’s a clean sweep. The Hoover files were apparently hidden in some inter-agency pension fund reports, and they’re all gone. [umm didn’t they already know this? lol maybe I’m giving them too much credit!]
Amanda: How’s Agnes? 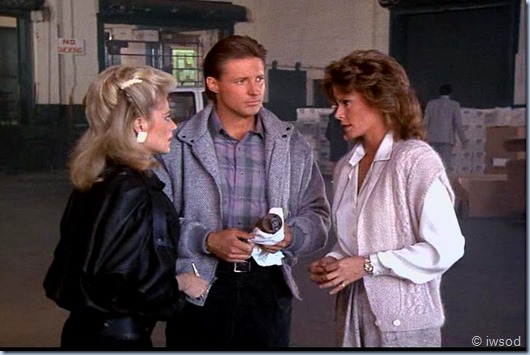 Lee: Look, there’s a chance … a very slim one—that Cross stashed the files somewhere in the warehouse.
The shot cuts to a close up on Francine for the first time.. oh rofl!

The first thing I thought of was Sandy from Grease!!! I got chills they’re multiplyin and I’m loosing controlol.. [If you don’t know Grease you are gonna think I’m crazy! oh well.. I crack myself up at least..or Francine’s jacket and ear buttons crack me up! Actually.. now I think about it Danny Zucko in Grease acts like a creep and winds up with the girl.. Am I the only girl who growing up thought- Sandy should move on?! whahahaaha]

okay okay! back to the episode.. sorry I’m getting distracted.. LOL!
Francine: I know, I already thought of that. I’ve got Agency janitors all over, but it’s gonna take days. Frankly, I would like to know if there’s a needle in this haystack before we start looking for it.
Lee: Yeah.

Whoa.. I think Lee fixed his hair before returning to the warehouse, it’s now crispy crunch and well.. he still looks incredible!

We find Amanda with Agnes..
Amanda: We’re gonna get you home, Agnes, and you can get some rest and you’ll feel much better. 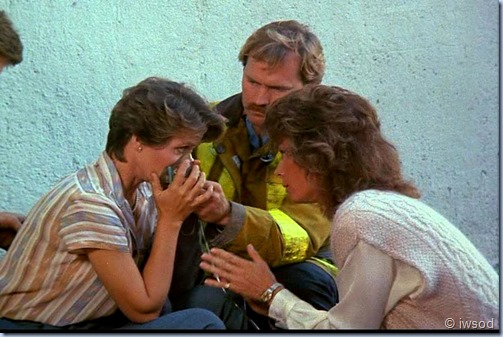 [I love how as Amanda talks to Agnes the paramedic tries to listen to her breathing, through her clothing! lol!]
Agnes: I’m not gonna feel better until Nicky Cross gets what he deserves.

Whoa! seems the anger phase of grieving has kicked in!!! Go Agnes

The scene ends here.. so I shall too.. Has all the love Agnes felt for Nicky vanished? I guess we shall see.. but at the moment – she’s furious at what he just did to her. and that makes me happy

tee hee.. [I can hear it now, Cindy you will like this huh?!

Okay guys.. would love to hear what you think! Hey BJo! Hey Valerie!!! Hey KC!!missing hearing from you guys! There are lots of us we haven’t seen here for a while.. it’s a busy time of year huh!
I guess I can’t list everyone lol.. – love to hear from you anytime you are able – but there is also no pressure or obligation SMK is for FUN!!!!! So stop by and say hi when you can

Hope everyone’s preparations for the holidays are coming along nicely! byeee for now!