We see Nick pull up in an industrial area in his van. He grabs his mobile/cellular phone (whoo he’s got cutting edge technology!).

We cut to Ronson waiting for Nick to call the phone booth.. Lee is waiting in Ronson’s car (not the vette! haaa well done Lee!) slumped down and trying to not draw attention to himself..
Lee: He’s not here. It’s too open. Don’t worry—he’ll call. 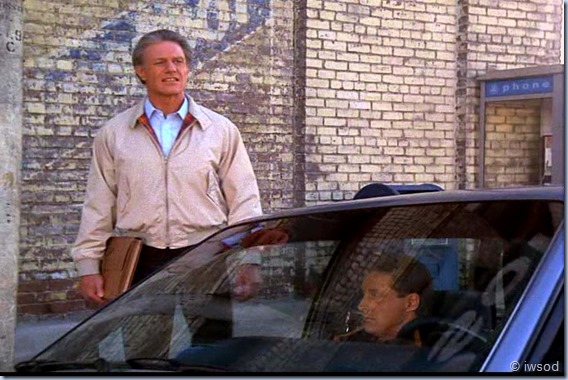 Ronson: I’m way over my head here, Lee—I know that. But are you sure this is the way to go? 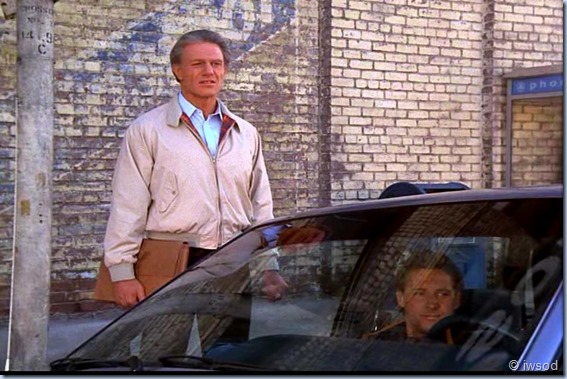 [over his head? but that’s why Lee is there to help! I mean surely Ronson isn’t holding the actual missile codes and risking Nick getting them..Umm.. surely?!]
Lee: We don’t have any choice, now, do we?… Ted, we’ve got a dozen guys ready to roll at a second’s notice. Cross makes his move, we’ll be all over him. I promise you. 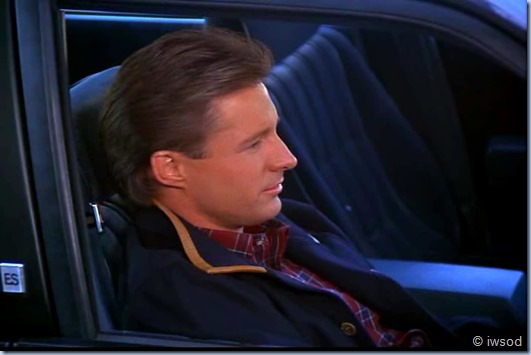 Such a lovely profile..
[they will be all over him? but Lee! Cross will be expecting that! umm Lee doesn’t seem to have learned to expect Cross to be clever no?]
Ronson: And this material’s authentic? He’s gonna want to validate it before he 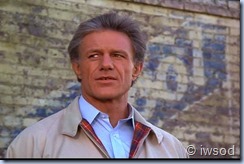 turns over those files. [oh nooooo so the papers Ronson has are authentic? nooo after last time 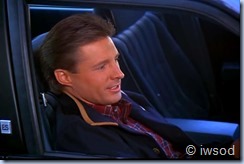 surely Lee wouldn’t risk it?! couldn’t they make it up so that it would take time for Cross to realise the info is false? (like they did with Falcon Wing in 3 faces of Emily?!) ]
Lee: If everything works out right, he won’t have any time to validate anything. [‘If everything works out right’?.. Oh dear.. call me crazy but with this national security stuff we might want to have a contingency plan for if well.. not everything work out right.. you know?! lol I’m starting to agree with Ronson and not be sure this is going to work! Lol!  ]
Finally, the public phone near Ronson starts ringing..
Lee: That’s him.
Nick calls gives him a new meeting place – a pipe factory… Nick tells Ronson he’ll see the file when Nick is ‘happy with your work’… and hangs up. 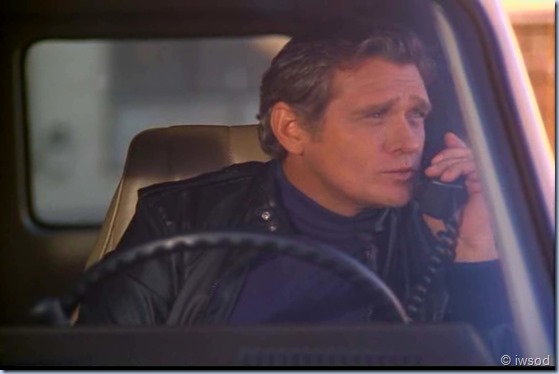 Ronson (to Lee): The old pipe factory, right around the corner.
Lee (on a walkie talkie): Francine—it’s the old Chesapeake Pipe Factory.

[Is Francine one of the dozen guys ready to roll?

Off Lee and Ronson go to the pile factory… Francine gets out of the van with the other ‘guys ready to roll’ and whooo love this.. she seems to boss them around – she’s in charge?! love it! 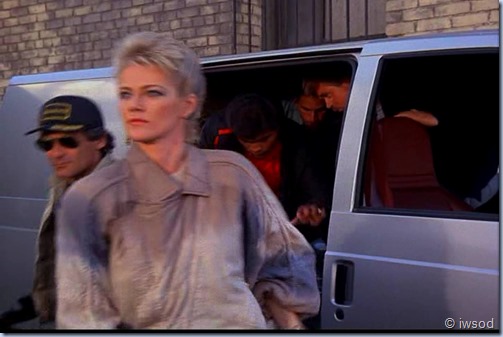 Ahhh check out her wardrobe! .. I’m laughing hysterically at this jacket which seems to have had it’s colours run in the wash! This is the episode of hideous jackets for Francine!

And all the agents piling out of that van?! It’s like a clown gag- you know where the people just keep coming and coming and coming.. how many agents can you fit into a minivan? A dozen guys.. and Francine!

Ronson stops just outside the pipe factory to let Lee out – he runs for the building and leaves Ronson to drive in..
Whoooo we see Lee moving into position with his handgun at the ready.. Go action Lee!

Francine and the guys are also seen rushing into the side of a building.. 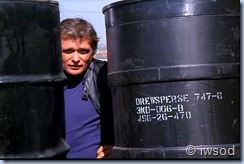 Ronson pulls up.. we see Nick is hiding somewhere between some barrels.
I really think Lee has not learned his lesson – Nick is not going to expose himself here knowing it’s quite possible Ronson has sought help.. this whole set up doesn’t really paint the agency in a good light! ( only IMHO of course!)
Ronson gets out of his car with his folder..and looks around for Nick.
Francine is on the roof (in her I want to blend into the roof coloured jacket 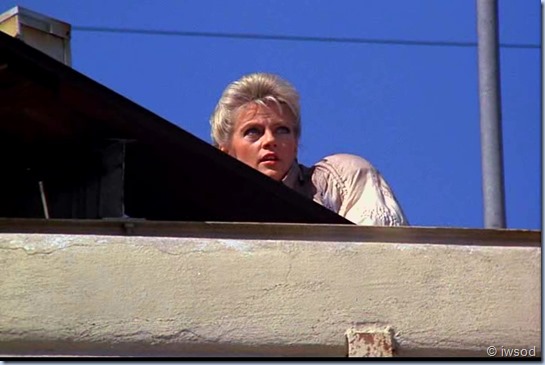 Lee is hiding somewhere and watching the events transpire.. while.. I must say – looking incredibly handsome.. Yep.. he looks so good here I love the lighting and the composition of this shot..just gorgeous! 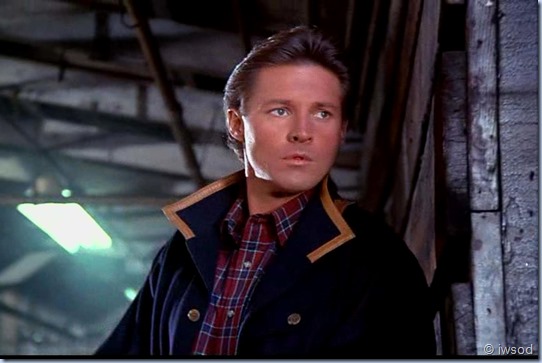 Ronson walks to the centre of the courtyard..

and we cut to Agnes driving her car..

[The graffiti is fabulous!]
Francine spots Agnes arriving.. and radios this information to Lee. [Though how Francine knows what car Agnes drives is anyone’s guess!] 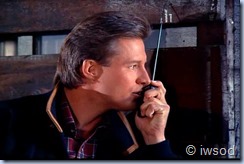 so much for everything working out right!] …What’s Agnes doing here?
[Gee Lee- you underestimated Nick..again.. and maybe Lee overestimated Agnes! she was too vulnerable to be left alone IMHO!]
Francine: What’s Amanda doing here? She’s about a block behind her. She must have followed her.
Lee: What? 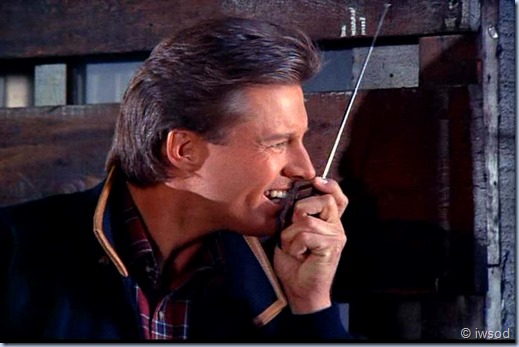 [Love how Lee reacts more forcefully to Amanda’s sudden appearance! he looks quite grey in this shot no?] me thinks Lee has lost control of this situation fast – or lol he never really had any control in the first place!]

Agnes gets out of her car and stands at the fence in front of Ronson.. 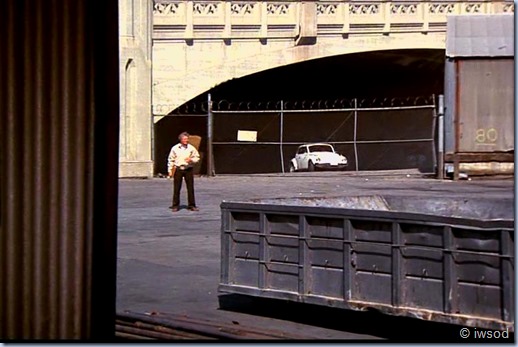 …Agnes is at the fence… I don’t see Amanda…. Everyone in position. Sharpshooters ready. [we see there’s a sniper in one of the windows- I guess the original plan was Ronson meets with Nick, Lee shoots Nick. Game over. lol..]

I imagine that Nick told Agnes to stop her car there and he would talk with her.. So she shows up having no idea what is going on around her. Agnes gets out of her car to find out what’s going on.. How would Agnes know who Ronson is? He wasn’t mentioned at the meeting..

We see Amanda somewhere nearby (though it’s unclear to me exactly where), she parks her car and runs to find a point where she can watch the action! How would Amanda know the agency were there? All she knows is she followed Agnes to this place. Does Amanda even know about Ronson? I guess those Amanda instincts have kicked in and she just knows that something is up here..

We see Nick move into position, behind Agnes’ VW, and a pillar with his gun drawn.

Agnes looks confused and approaches Ronson.. who calls out: You’re with Cross? 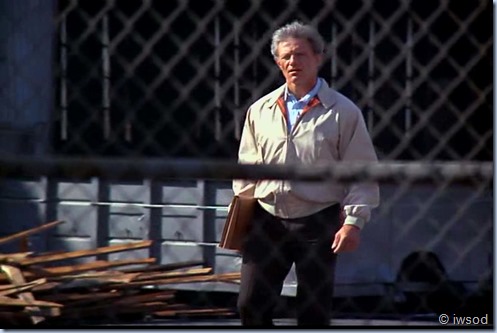 Agnes doesn’t know what she is.. or who this guy approaching her is.. 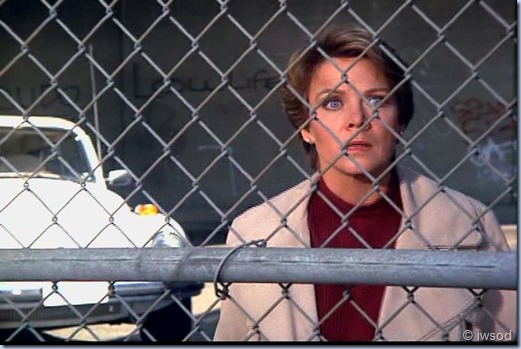 and I’m guessing at this moment she doesn’t know what the heck she is doing there or why she gave Cross this opportunity to use her again. She wanted answers… I think in this instant she knows she’s made a huge mistake in choosing to meet Nicky one more time. Sadly, she has her answer.

We see Amanda has found her position behind a pillar to watch the events unfold..

I guess this is Amanda’s viewpoint which we can see here. She can see Nick is hiding there..
Nick calls out: Give her the papers, Ronson.  Nice and Easy.

Agnes was never an accomplice to Nick here IMHO- she was a victim the moment she showed up.
Agnes: Nick? [Interesting, he’s no longer ‘Nicky’ ] 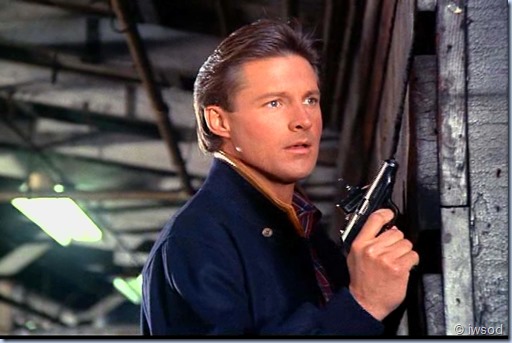 [I guess Ronson is trying to draw Nick out so they can get a clear shot. but.. it really looks like that’s what he’s doing here too! Kudos to Ronson here – he is putting a lot of faith in the agency sharpshooter to take out Nick and miss Ronson! He is a hero here.. for the sake of his daughter (which of course I don’t get but it’s what the character thinks that matters), and he’s doing it for the sake of his country.]
Lee (into his walkie talkie): Cross is at the other side of the fence.

Nick takes things a step further.. he moves closer to Agnes and points his gun at her..
Nick: Give the woman the papers, or I’m gonna shoot her. 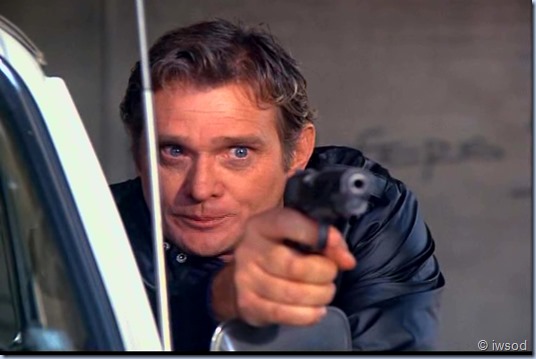 I suspect there is no limit to what Nick would do to get those papers.. I think he would shoot her. What about you?
What a charmer – so now, he is no longer just getting her to take the files, he is using her as a hostage too.. this guy is a low life.. [this reminds me of how Lee trusted Eva – and how she aimed a gun at his back..]

Nick: Anyone out there… I’ve got the woman in my sights… 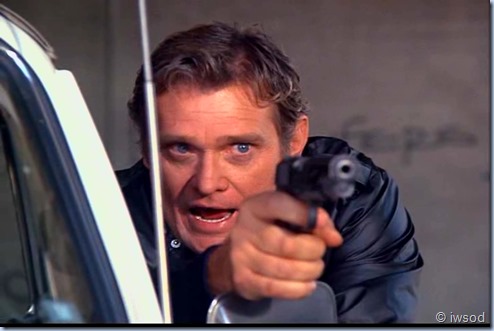 Well, if there was still the tiniest hint of a doubt about whether Nick really was a bad guy… I’d say he’s just solved that one for Agnes!
We see a shot of Amanda watching on.. this shot of Amanda looking in the distance, with the wind blowing her hair – is a beautiful shot.. again the lighting is perfect, the blue/pink combo of her sweater is gorgeous..Love these colours on her – I think this is one of her sweaters I would actually consider wearing!

Agnes is trapped.. with no way out..
With Nick calling out like that – I guess Agnes realises this is some kind of agency operation.. and maybe there is hope that she is not alone here and someone can help her.
Agnes (terrified): Mr. Stetson?  If you’re out there, could you please help me—I don’t know what to do. 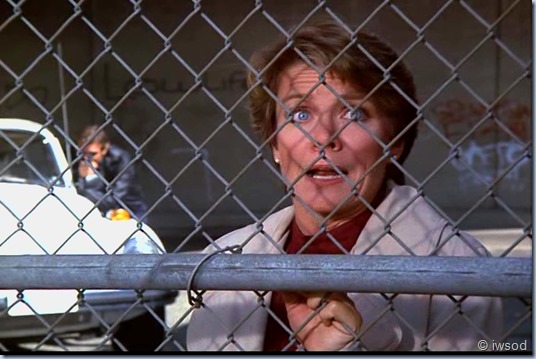 [poor Agnes, she’s a librarian, she isn’t use to this action/hostage/danger stuff!! She’s one of those ‘real people’ who are involved]
Lee has a choice here – reveal himself or not.. Agnes calling out to him like this means he has to choose- help Agnes, or put catching Cross first..
Lee: Cross, let the woman go! 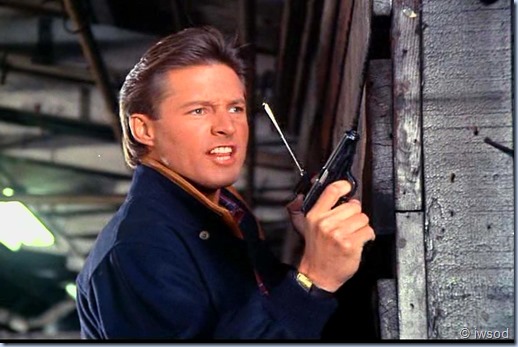 Lee chooses to help Agnes – by revealing himself, he has put the operation, and national security at risk [I can picture Dr Smyth thinking Lee made the wrong choice here.. how about you?]
Who doesn’t find Lee adorable in this moment?! This is a good man. [I like to think that when Amanda sees Lee do things like this – she knows he is a man she can trust.. and that she could trust him with her heart

]
Lee doesn’t hesitate to protect Agnes and do what he can to help her. He can see she is an innocent party here.. Bless him!!
Agnes looks desperately terrified here.. the man she once loved (yes I think the love is no longer there at this point!) has turned into a monster right in front of her eyes.. My heart breaks for Agnes here. Previously I watched this wanting to tell her to snap out of it.. My thinking about Agnes has completely changed these days!
Lee: You can have the papers—we can do this nice and easy. 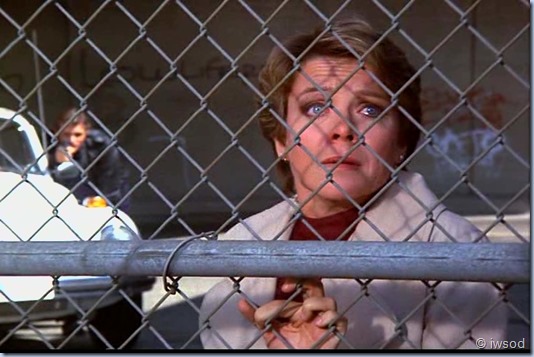 Okay, this post is getting massive.. I better stop here for the moment. yes, I could have skipped a lot of this.. but when I skip things- I risk missing gems, new insights I’ve never had before –like, I’d never realised the implications of Lee’s choice to protect Agnes here.. and it says a lot about his character (awh!) – So how are you all finding this part of the episode? Or the ep so far?
I don’t think I’ve thanked KC lately – KC thanks so much for transcribing this episode for Operation Sandstorm – it is a huge help – We salute you!!
I think this episode doesn’t really leave Lee’s running of this operation (to catch Nick Cross) looking very professional – it all seems pretty silly to have Lee underestimate Nick again.. Oh well – can’t wait to hear your thinking!!! byee for now!