Francine: we all love to hate her. (A few people actually do love her

). We probably don’t know enough about her background and her motivations to understand her more kindly…. But these posts are not about analysing Francine’s personality, insecurities etc – I’ll leave that to a Francine fan. My aim is to celebrate the sometimes truly appalling outfits that she wore

in seasons one and two. In the first post, we’ll cover Francine’s bad hair days, bad jewellery days and unfortunate outfits. And in the second post, I’ll examine Francine’s best outfits (yes sometimes she looks fabulous) and the little known group of Francine outfits: Francine’s animal-themed outfits. Those with more detailed knowledge of the technicalities of fashion, I need your help. I’m just a per(s)nickety SMK fan. But enough about me, and on with Francine

Francine’s hair was manageable, up until the time she had a perm (“permanent wave” ) in early season two. The results were unfortunate. Yes, most women did it in those days, but that doesn’t make it any more palatable to the 21st century viewer. And what looks like lashings of mousse didn’t help. She looks more like she’s had an electric shock here (Brunettes Are In). 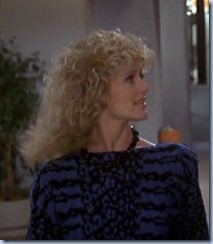 When you glance briefly at this 1934 Permanent Wave machine, you can see why. Reminds me of someone being connected to an EEG machine 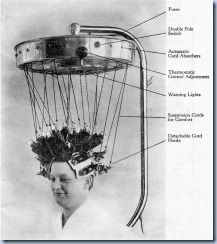 A misguided SMK hairdresser compounded the problem by added a puppy-for-Christmas bow in The Three Faces of Emily. 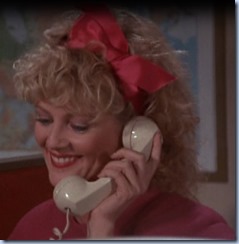 And another (slightly more restrained) bow in Car Wars is thankfully slightly camouflaged by her hair colour. 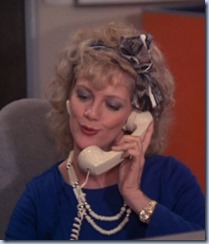 And, The Three Faces of Emily, an Amandaband. Why, I ask with tears in my eyes

?? Notably, this is the episode where Amanda reprises her custom hairband. Bad hair(dresser) day?

A final look, which mercifully disguises the perm but is an abomination in itself, was when Francine copied Amanda’s season one updo (Playing Possum). Lots of curls. Way too many curls. Worked for Amanda, not so good for Francine.

In all honesty, we have to admit that Amanda had some bad hair days – or months – as well 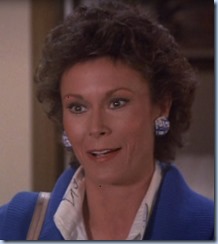 and looks lovely with a French Plait in Life of a Party. Learjet gives credit where credit is due

Francine specialised in jewellery of the large, chunky variety. 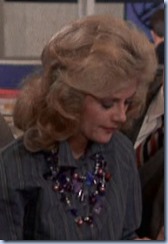 One of her earliest example (The Artful Dodger) was quite moderate and pretty. But she moved on to large, Egyptianesque necklace – this one was cunningly matched with the colour-coded belt and buckle, and bracelet (Spiderweb). Anyone admit to having one of those belt\buckle combos? I had a lilac (!!) belt with butterfly buckle in my mid-teens. Moving swiftly on from that disastrous choice – Francine liked the necklace so much that she wore it again in Odds on a Dead Pigeon (see the updo photo with the teal top).

A similar offering in Burn Out

A personal non-favourite is the downward “arrow” necklace (A Relative Situation). Francine doesn’t look too happy about it either. I’ve got a nasty feeling it reappears in early season three as well. What is that arrow supposed to be pointing at? Is it supposed to be diverting attention from the curious black with red dot semi-jacket thing that she’s wearing?

Then on to Francine’s secret weapons – her ear-rings. I’m not sure if they’re her equivalent to the spy’s hidden cyanide pill or whether she wears them in case she needs to take out a baddie. Are these from Spiderweb aiming to pierce the external carotid artery? Or is an ear-piece for the first mobile phone?

Next is the less dangerous but rather strange pair from the same episode.

Or these clear ones (Burn Out), bizarrely paired with the pearls and  decorative hair comb. 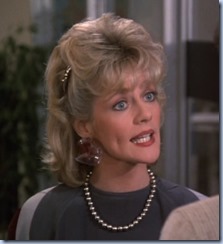 In the early part of season one, Francine favours red. I’ve said that I love red, but not the faux tartan look in If Thoughts Could Kill (and who would thought the well-endowed Francine could have looked flat-chested?).

Then we have the Star Trek pinny in Magic Bus or the alternate Star Trek look in Filming Raul and Murder Between Friends (with matching red plastic ear-buttons): 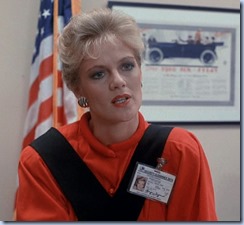 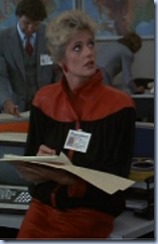 I’m not sure what I think of this red top with mixed up kaftan thingy from Magic Bus. It certainly doesn’t flatter her figure.

“Out of Africa” for the Weekend? Unfortunate colours (grey and beige??), a massive buckle (with large matching necklace) and the hat. No wonder Francine has toothache.

The shapeless, monochromatic look, with half-sleeves (Playing Possum and Life of the Party). The outfit matches her hair colour. 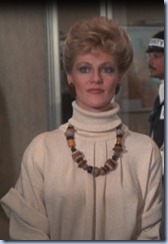 The blue colour isn’t too bad (You Only Die Twice). I can even live with the blue/yellow contrast (just). 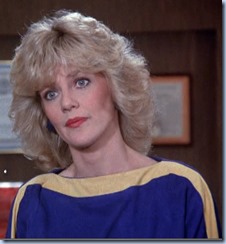 But the crowning horror is the loose, brownish trousers. What was she thinking?

Have I missed any horrors out? Anyone got an ‘expert’ view on fashion to add? That’s all for now from Learjet.  Next time, I’ll be being a bit kinder to Francine, I promise