10/19 Season Three, Episode 13: One Bear Dances the Other Doesn’t – Scarecrow and Mrs King

We left Lee heading to a meeting with the leak’s leak Jerry!
We find Lee on a street, waiting for Jerry.

Jerry: Listen I’m sorry I’m so late. I think somebody’s following me.
[lol isn’t this almost an exact reply of the opening scene?dialogue virtually the same!]
Lee: All right, look around, see if he’s still there.

Cut to a view of a gun being loaded, then aimed at Jerry and Lee. 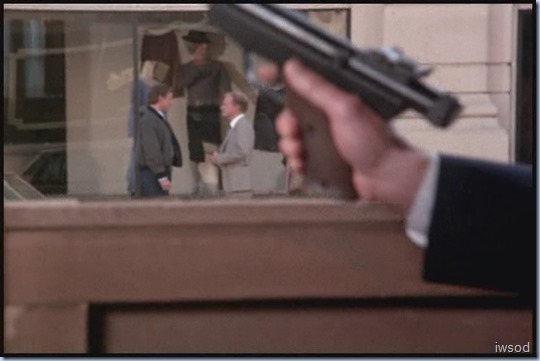 Jerry: I think he’s gone. It’s the defector’s they’re after. They dress up as cops, and then they go pick
them up in this Russian restaurant.

The gun is fired. Jerry gets shot and Lee ducks behind a car for cover.. Jerry falls through a storefront window  shattering the glass.

His gun drawn, Lee takes off after the gunman.
He heads down an alley and ends up finding a homeless person.

As Lee recovers from almost shooting a homeless guy, the gunman surprises him from behind – shooting at Lee while he is exposed.. 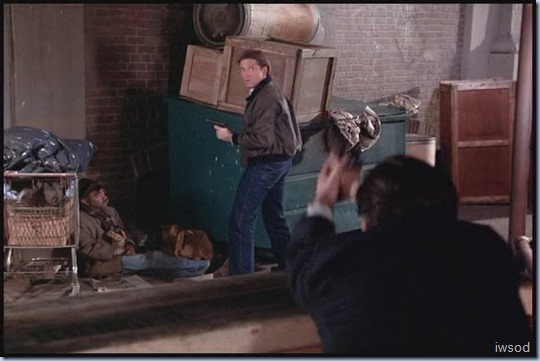 Lee is super fast though.. and manages to duck as the bad guy shoots at him. whooo looks like he is shooting darts.. Umm.. why? Why not bullets?

but the bad guy manages to get away in a car with a sign ‘Aero-North Vehicle’ lol you’d think if you are wanting to commit a crime you’d cover that ha! But did Lee see it? not sure.. but I love how as Lee intensely stares off into the distance a random male extra calmly walks behind him.. like oh yes.. I see shoot outs every day! lol!
So did Jerry die? I mean they were darts?? I guess I’ll have to wait to find out.. (don’t tell me!

Moving on… later that night we find Dotty and Zernoff have headed to the Moscovy Tea Room. We can see them next to the front window at a table.

– gee Jerry mentioned a Russian restaurant.. and Lee heard Zernoff being told about this place.. hmm.. he’ll head straight here won’t he? so he’ll be here already? because it was daylight when he got shot at no?

Anyway, the camera pans down the street a little and we find Amanda staking them out.
Did you see it? ‘Waigner’s bakery’!

LOL that’s gotta be a shout out to Paul Waigner, producer of this episode and many others! It’s been a while since I’ve seen a shout out.

Amanda is in the car outside, calling the Agency.

Francine: International Federal Film
[Of course Francine answers!]
Amanda: Francine, it’s me, is Lee there?
Francine: Ah, he hasn’t checked in yet.
[whooo Francine knows who ‘me’ is.. lol.. I guess this ‘me’ is asking where Lee is.. so that does narrow it down a bit 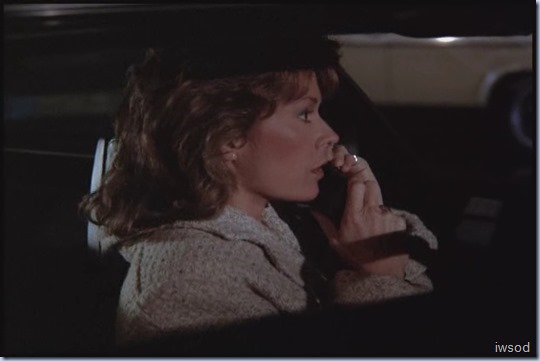 Francine hangs up, then Amanda. lol very business like.. no goodbyes! I love that Amanda doesn’t let Francine get to her!

Inside the restaurant Dotty and Zernoff listen quietly to the music.. yep that’s right.. Dotty’s being quiet

I think the music has put her in a trance.. I hope I don’t offend anyone when I say this song is awful and goes on way too long! [I usually love Russian culture honest!] 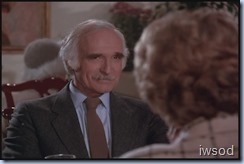 Zernoff: “The land is like my mother. I am a child in her strong arms…
[As Zernoff recites this poem.. or is that translating the song that guy is killing? Anyway, we see Amanda react to this in the car listening with a little smile.. Awh]

… I sleep in the loving embrace of my
Mother Russia”
[Zernoff motions like he is getting a little teary. Poor guy.. maybe the realisation of what he has done, what he has give up, is sinking in. No wonder the baddie suggested this tea room to ease his loneliness – it’s positively guaranteed to make Zernoff vulnerable..]

The song ends and everyone claps [I’d be clapping because it has ended..]
…Dorothea, I cannot begin to tell you what this day has meant to me.
We cut to a bartender, putting a white powder in a drink.. uh oh..

The Russian waiter (guest that is a Waiterov) brings Dotty and Zernoff a glass of vodka – one of them druggoved .

Zernoff: Well, shall we take a look at the menu?
Dotty: Wonderful
Dotty: Oh, thank you
Zernoff he raises his glassov in a toast: To you Dorothea…and, to the future…

Zernoff drinks his, and it looks like Dotty pretends to drink hers.. 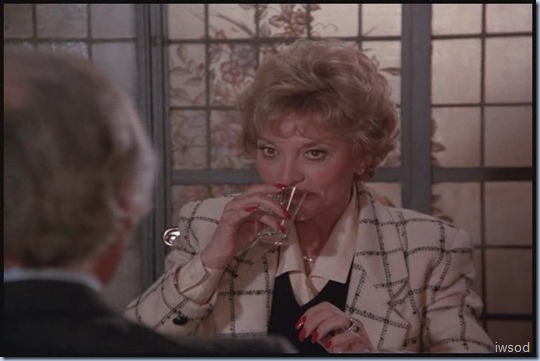 …Ah, you worry about the vodka huh? I am a Russian Dorothea, A Russian waters the flowers of his
memory with vodka. Ah, too much perhaps. But memories and vodka often need each other.
[lol I’m thinking that could be a dangerous combo!]
Dotty: Maybe we shouldn’t have come here. It brings back too many memories.
Zernoff: I cannot forget, here, there… You know, 60% of defectors go back. Uh,..

[Make that 99% after visiting the Muscovy tea room!]
Dotty: Andrei, are you alright?
Zernoff:  Uh <pulling at this tie>…Dorothea would…would you excuse me a moment? I…..I’m feeling
strange.
Zernoff gets up, walking unsteadily.
Amanda gets out of the car and heads toward the restaurant.
We see a police cruiser pulls up with lights
flashing around the corner.
On the way to the restroom two waiters grab Zernoff.

Zernoff: What are you doing? No! I…….
We see Zernoff is forced out a back exit where the police cruiser  (car number 1017) is waiting.  Andrei is forced into the back.

Dotty comes out
Dotty:What’s happening???? Where are you taking Dr. Zernoff??? 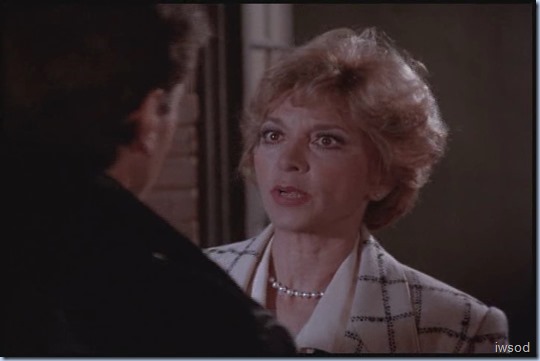 Cop: You know this gentleman?
Dotty: Yes, we’re together
Cop: Well I’m sorry ma’am, there’s been a little altercation, we have to take him in. 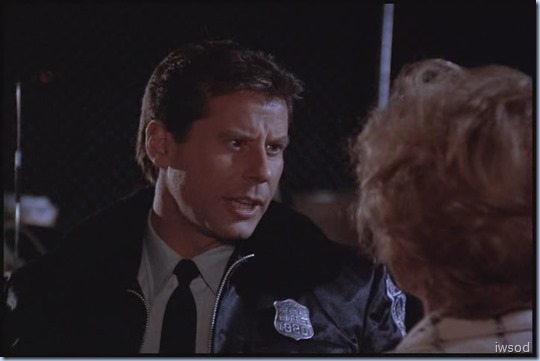 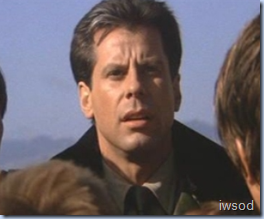 [LOL this actor must have a career playing cops.. he was the Sheriff in the goonies!]

Dotty: Oh, well I know him very well, we’re together and well I’m going with you!

[Boy.. Dotty wanted an adventure  – and she’s got it!
Dotty doesn’t wait for the cop to respond, she just goes to get in the car and you can just make out that the cop looks a bit baffled by this-ha!]

Cop: Wait a minute, you can’t go!
Cop 2: Bring her along, we gotta move.
They all get in the car and Amanda comes out the back door as the car is pulling away.
Amanda holds out her mother’s bug.. err purse she calls: Mother!!!

Dotty (hanging out the window of the cruiser): Amanda, I’m fine darling, I can deal with this…. 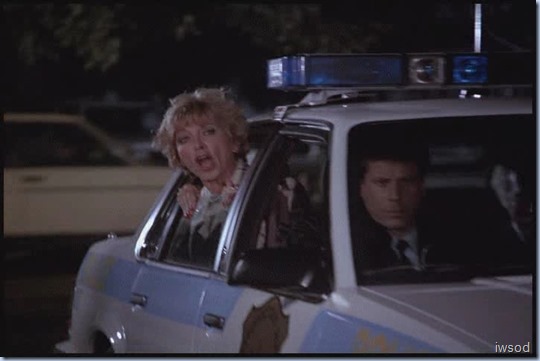 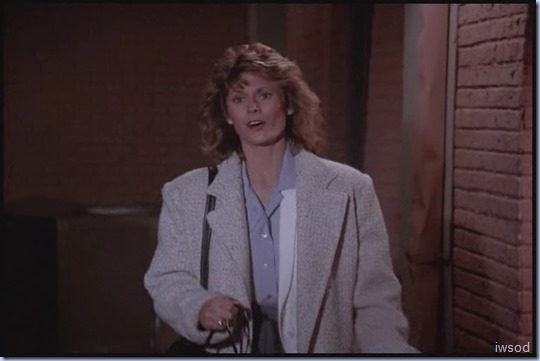 …Amanda, I thought we agreed you’d stop following me!…

[Oh rofl!!! What would Zernoff make of Dotty’s daughter following her??!!!  ]
too funny!!! After putting her daughter in her place.. she gives a friendly wave as she’s driven off by the police whaahahaaa!! 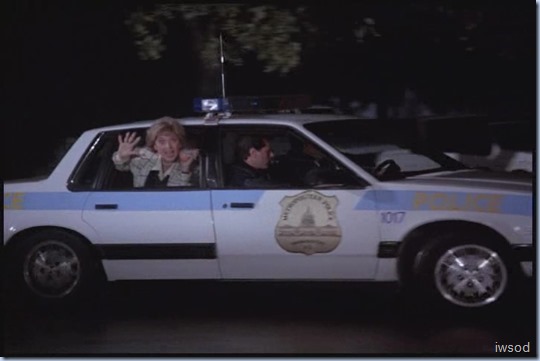 …Bye!
Just when I thought Dotty couldn’t get any funnier!! I’m fine! I can handle being driven off by the police?! whahahaaa.. oh and why are you following me?!!! Love the ‘we agreed’ that Amanda would stop following her – Dotty didn’t give Amanda a chance to get a word in!
Amanda looks on worriedly as her mother is driven off.. without her purse!! oh nooo!!
Amanda to herself: Ohhhh!!! 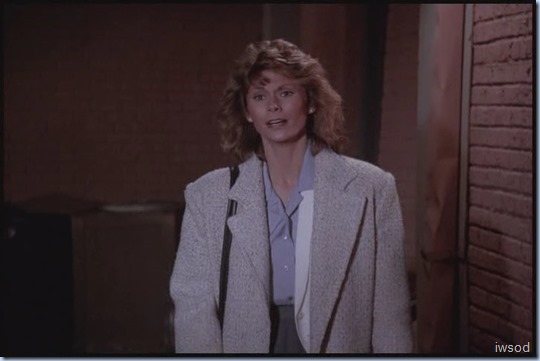 And at that moment Lee arrives.. soooo I’ll pause here and pick up again right at this moment..
Anything you’d like to share? Anyone been to Russia? Anyone living in Russia?
Again, sorry if you love the song… forgive me?!
Hope you are all well! I think most of you are off on your summer holidays- hope you are all having a fabulous time!!!! And I’m looking forward to hearing from you when you get back