13/19 Season Three, Episode 13: One Bear Dances the Other Doesn’t – Scarecrow and Mrs King

Cut to the Moscovy Tea Room. Lee and Amanda with the two waiters
Waiter 1: They’d show up every once in a while, and point some guy out to us, and slip us a few bills…

[hmm.. corrupt waiterovs!]
…We never got names. I figured they were from immigration. [plain dumb, corrupt waiterovs! – When immigration starts drugging people we should worry! ]
Lee: Yeah sure you did.
[I actually think given these guys were taking money and drugging patrons they should be arrested with assault- a verbal chastising from Lee doesn’t cut it!]

We see an old guy enter in the background, Lee turns unobtrusively and seems to take note.. 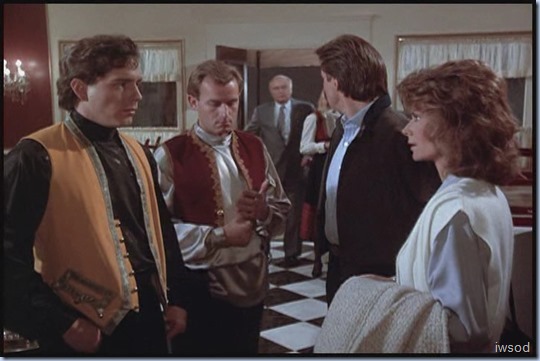 The man sees Lee and immediately starts leaving..
Lee (to Amanda): Stanislov!
They both take off after Stanislov without another word to the waiterovs..
He doesn’t get far.. Lee calls out: Dr Stanislov?!
He grabs his arm to stop him from leaving..
(right in front of the Waigner Bakery – yum yum)
Lee: Dr. Stanislov.
Stanislav: I will not come with you! I have done nothing wrong! 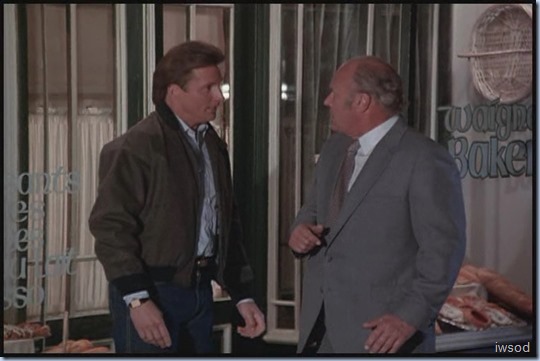 Stanislov: You look for him also?
We cut quickly to a lady exiting the Muscovy tea room.. I went back to look at this because I wondered if it could be Amanda.. but I found another surprise..

I think I found Andrei and Dotty! tee hee.. There they are at the front table no?! They’ve darkened it but I think that’s a reused shot from earlier. ha!
they thought I’d have nothing better to do than to notice.. well.. I showed them!

Inside the restaurant, we find no one sitting at the front table, seems it’s after closing with all the chairs on the tables.. Stanislov sits with Lee and Amanda.

Stanislov: It is my fault, Andrei suspected something, but I urged him not to jeopardize our stay in America. I thought only of myself.
Amanda: No, you were frightened.
[I think when Amanda says this Lee gives her a sideways look –Amanda is doing her thing and great with helping people open up .. and he notices and appreciates it. Aren’t these little touches fabulous?]

Stanislov: When I got drunk like Andrei they took me back to the debriefing centre. Mr. Lawrence kept assuring me no one would have to know , if I could review everything I told them before.

[I don’ t know why but Stanislov cracks me up.. he’s soooo animated..]
Amanda and Lee are confused at this revelation of Stanislov’s.. and share a look.
[Lee’s thinking hard.. the thumb is tapping away!]
Amanda: (to Lee) what’s the point of that?

Lee: I dunno. When we find Jake Lawrence we’ll ask him.

We cut back to Stanislov giving a little nod: Da that’s a good ideasovy!

Okay so come on everyone.. without looking it up.. anyone remember where we’ve seen the actor playing Stanislov in SMK before?!
For the answer see HERE!

The scene ends here.. but before we move on.
Let’s recap.. because I’m shocked at Lee’s ‘I dunno’!
[Iwsod can’t switch off from the plot.. it’s not why I watch, but.. it’s gotta make superficial sense.. and this doesn’t to me! help?! ]
In post 1 Lee learned  from Jerry his information that the unknown company he worked for had leaked information- the text of 3 recent soviet debriefings on their latest prototypes (including Stanislov’s debriefing notes).
The whole point of following Zernoff was to find out how whoever was getting this information..
In post 10 Lee learned from Jerry the informant that his company was posing as cops..
In post 11 Lee learned Zernoff and Dotty had been taken somewhere by fake cops..
In post 12 Lee learned Jerry works for Aero North Industries, and Sanderson North is the CEO. (The company Jerry worked for was dodgy remember?)
Lee also learns Zernoff’s vodka was spiked, and then he was taken away by fake cops.
Now in post 13 (the lucky number!), Lee learns the exact same thing happened to Stanislov.. he was drugged, taken to a debriefing centre by these fake cops, Jake Lawrence was there – so he’s in on it.. and that’s when these Russian defectors revealed the weapons information – so this is how the leak is happening right? And Lee doesn’t know what’s going on??
I’m surprised the baddies had Lawrence interview the men – it could have been a nameless govt fake agent.. why reveal to the men that Lawrence is involved and then let them live? but.. what do I know

Moving on.. I promise.. (non plot followers breath a sign of relief).

We head back to the debriefing centre.. where Zernoff is being debriefed about his previous state department debrief!
Lawrence: About the MIG 29. Could you elaborate on the airfoils.
Zernoff: AH. The titanium allow airfoil on the MIG 29 are 30% lighter and they’re twice as strong.
[whooo and great for tennis rackets

]
Lawrence: Uh could you explain that in a little more detail Dr. Zernoff?

Zernoff: Why? I went through this already when I was here before. They said I was finished.

Lawrence: Sir, you are a guest in our country. When there’s trouble we have to review everything. I’m afraid you could still be asked to leave. I’m doing the best I can to prevent that.

[Slime!!!! Trying to pass himself off as Zernoff’s champion? ugh!!! Hope someone punches Lawrence in that smug face!]

There’s a knock at the door. A guard whispers something to Lawrence, and he has to leave Zernoff a moment.
Lawrence: (to Zernoff) Ah, excuse me please.

We find Dotty giving the desk guard what for – goooo Dotty!

Dotty: You take me to Andrei right now, or I’m going to start looking for him myself.

Lawrence: Mrs.West…..
Dotty: Mr. Lawrence , I have been more than patient. It has been over two hours and I still do not know what’s happening with Andrei. I can’t make a call, I ….. 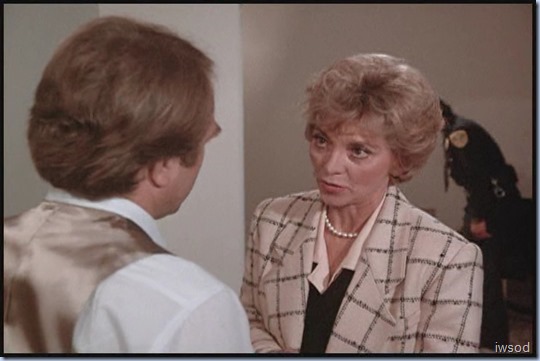 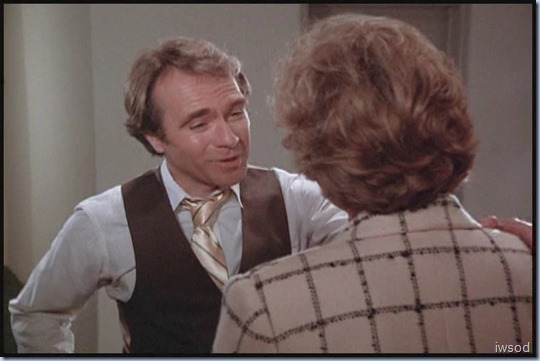 [Hmm is she really buying this?! I don’t know..maybe she is..]
Lawrence: Oh, we’ll take care of that, security phones and all…
[How will they take care of that when he hasn’t asked for Amanda’s phone number?!]
(Lawrence directs Dotty down the hall)
…But you know, it may take a while longer, so why don’t I find you a room, where you can lie down a bit?
Dotty: Oh. 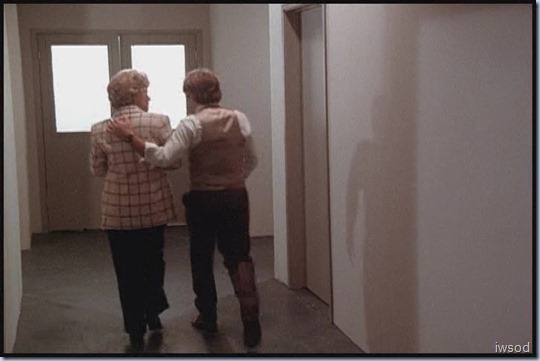 Dotty goes along with Lawrence’s suggestion.. for now? I have noooo idea what’s ahead with this whole plot! It’s quite ominous though to see Dotty at the baddies’ mercy like this.. Lawrence leading her to a quiet room somewhere.. she’s very vulnerable and it adds an element of suspense to this – well it does for me because I don’t know what’s going to happen! Although okay, I can assume Dotty is not going to die!

And on that happy note I’ll pause here.. Anything you’d like to share about this part of the episode? Does anyone remember watching this for the first time? Is there anything in the script about how Lee says “I dunno” in response to Stanislov and Amanda?? Hmmm.. oh well bye for now! can’t wait to hear from ya! I’ve missed hearing from you all on our walk together