14/21 Season Three, Episode 22: All the World’s a Stage–Scarecrow and Mrs King

Elsewhere in the hotel..
Valentine: I never should have agreed to do this. 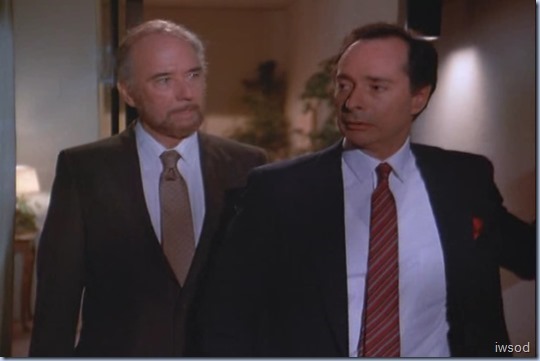 [Ugh!!  I despise spineless reluctant baddies who go on about how they never should have agreed to do this – all while continuing to go along. That doctor in The Eyes Have it was the same! I guess the question is: Is Valentine one of these baddies? or is he going to step up and redeem himself?]
Krutiov: You never had a choice. None whatsoever… 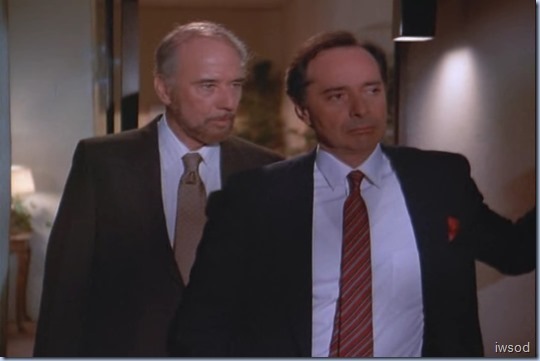 [Krutiov tries for humour. It doesn’t suit him.]
Choice. That’s what it all comes down to. And here IMHO Krutiov continues to manipulate, giving Valentine an out- that it’s not his fault, he’s not responsible – he had no choice. So Valentine can ease his conscience and continue to do what Krutiov wants. It’s a lie though. Valentine is making a choice- he chooses to go along with Krutiov… but why?!] 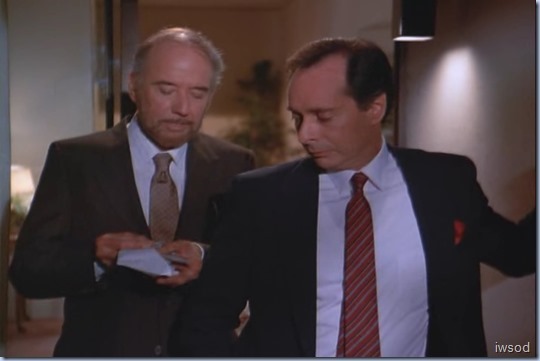 …This will assuage your guilt. Call it a bonus….
(Valentine rejects the envelope crossing his arms rather than taking it from Krutiov)

…I know you want one….
(Krutiov slaps him on Valentine on the arm with it.)
…No time for quibbling.

(Krutiov waves the envelope & Valentine takes it.)
[Ahhhhh this is why Valentine chooses to continue to go along, even now that he knows the terrible things he is a part of. ]
(The doorbell rings)

…That will be Mr. Martinet.

[Krutiov is sounding rather upbeat. Me thinks he enjoys his ‘work’ too much!]

(Krutiov and Valentine move toward the door. Krutiov hides in a room opposite, Valentine goes to open the door.)
[I think Krutiov stays very close to Valentine here – as a looming presence, and another push to do what Krutiov wants]
(In comes Tony)
Carl: It’s over, good….

…Can I have the tape? 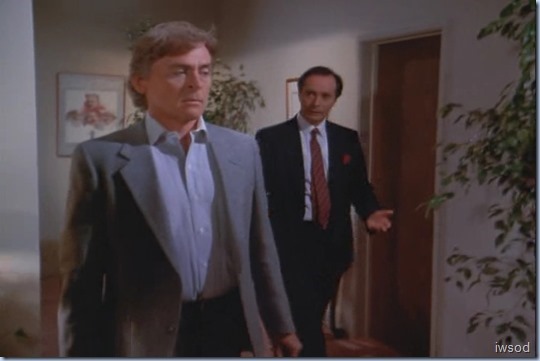 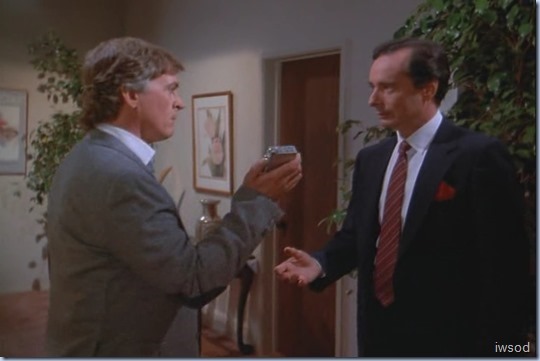 …The rest is erased.

Carl: Tony, would you be serious?… 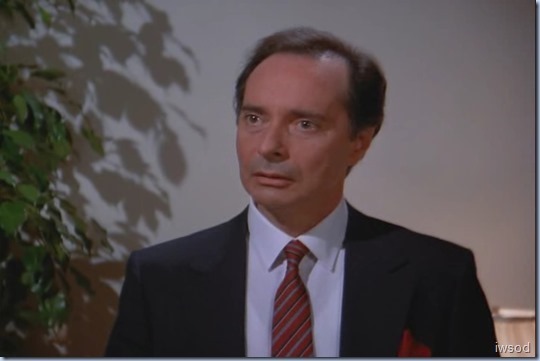 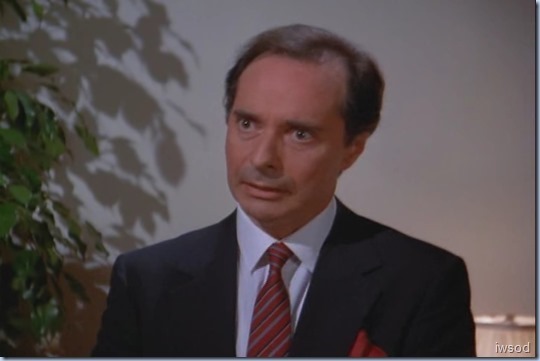 Tony: I waited 10 years to get my play produced…

…When I know that Maria is safe, and when the curtain comes down at the end of opening night tomorrow, then you get the tape.

Valentine doesn’t have an answer for Tony, probably because Krutiov hadn’t foreseen Tony doing this and hadn’t given Valentine an instruction!

and Tony leaves. The scene ends there.
I wanted to see Krutiov’s reaction!

Night time, we see the black limo driving along  a quiet street.
On the backseat, Lee’s still out of it.

Time to do something about that!
Amanda tries to rouse him. 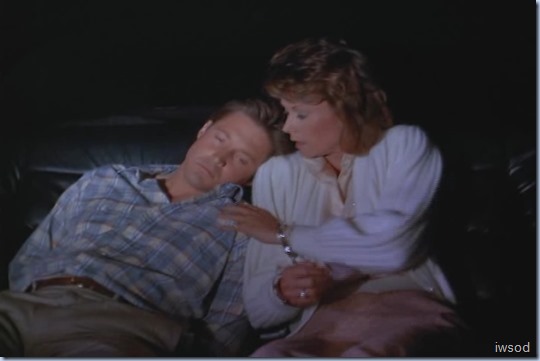 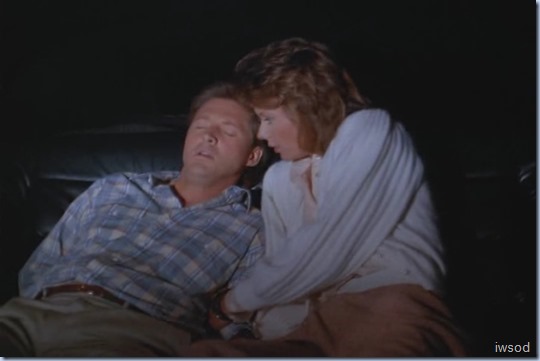 Amanda: Oh thank goodness I thought you’d never wake. up! Can you sit up?

Amanda helps Lee up into a less slumped posture.
Lee: Woah that was something real potent.
[Ohhh he was drugged? How?!]

Amanda: Take it easy.
(Amanda runs a hand over his hair.) 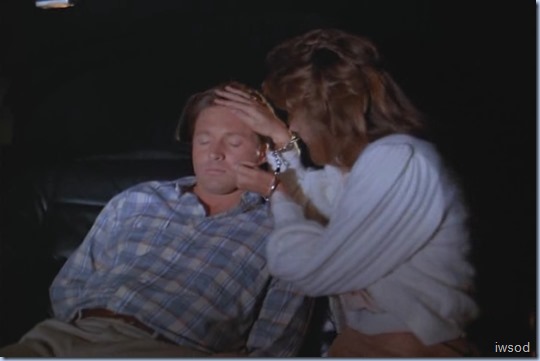 [Partly comfort. Partly to help him rouse some more?.. Any excuse!

Lee blinks a few times, trying to adjust his focus.. 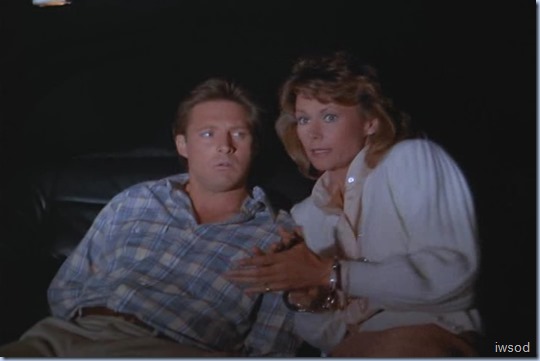 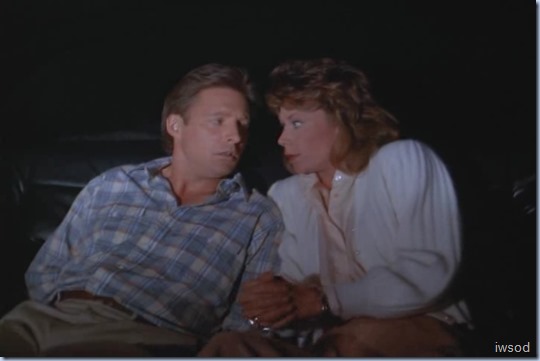 …I think we’re heading toward the Blue Ridge. 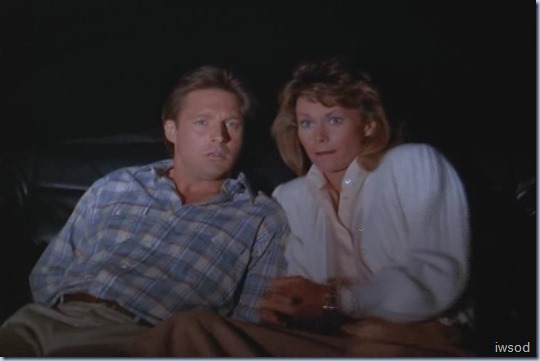 Lee: We gotta get out of here before we reach the Atlantic, then.

(Lee wiggles a bit trying to get at his hands behind his back. We see lights from passing vehicles)
Amanda: Yeah, you have a half-rake? [Thanks for transcribing this Karyn! I couldn’t make out what Amanda says here!] 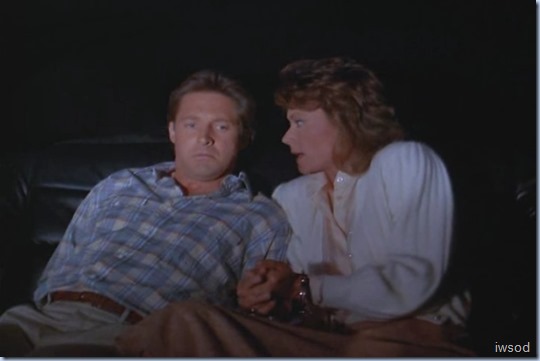 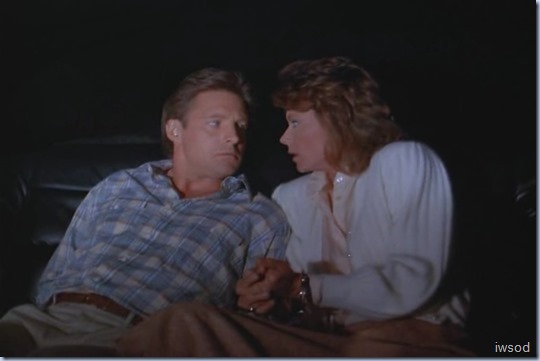 Lee: A lock pick?
[This is going to take some getting use to this Amanda having such spy skills and all!]

(is it just me or is Lee looking at Amanda’s mouth here?) 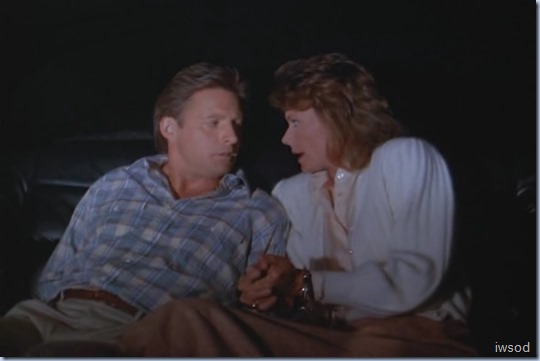 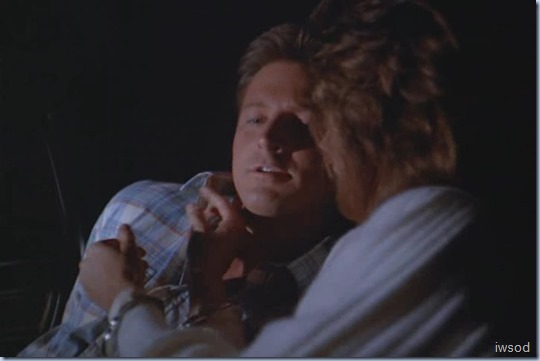 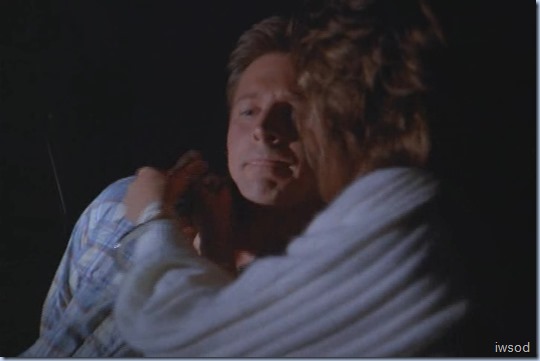 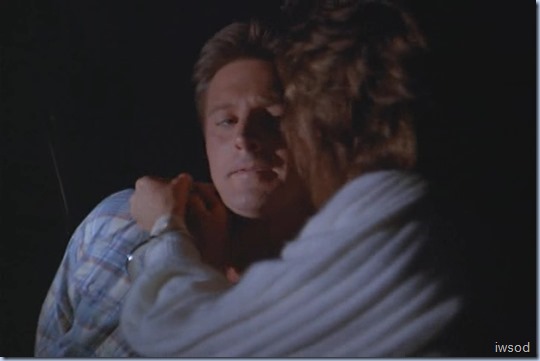 (Lee kind of chuckles as Amanda works at his collar.)[Incredulous at this turn of events I guess. thoughts? ] 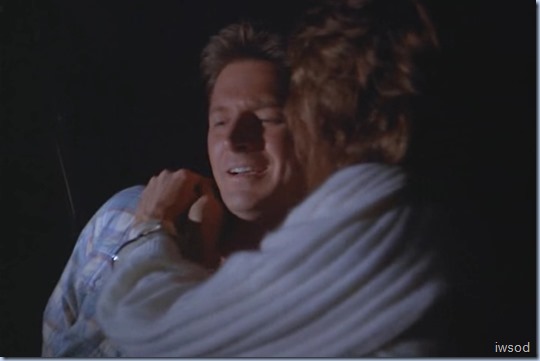 ….Aw this isn’t going to do any good Amanda.
Amanda gets this pick out of his collar while Lee shifts his cuffs behind his back.
Amanda: I got it.
Lee: These things are so tight, my hands are dead.
[I’m pretty sure being unconscious and sitting on them for hours doesn’t help either!] 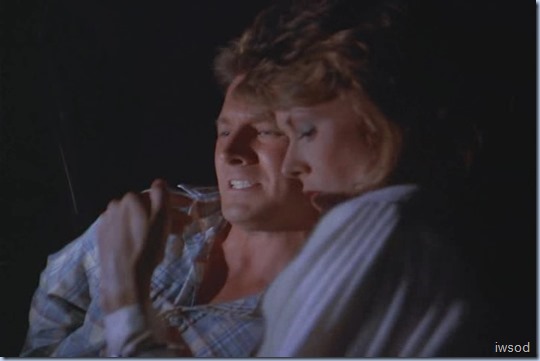 (Amanda works on her own cuffs. Lee watches on with great interest!)

Amanda: We’re lucky we got the 7% of the bad guys that don’t always cuff you behind your back…
(She breaks out of her cuffs. Hoorah!) 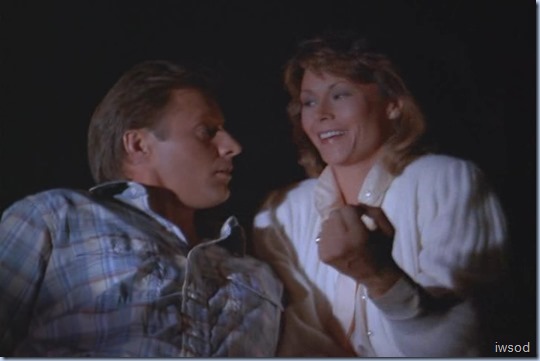 …Leatherneck’s going to have to move you all the way up to safe cracking.
[Yeah!!! good one Lee!]
Amanda: Yeah, what’s he going to do to you.
Lee: I’d settle for grand theft auto aaah ow.

[This pic above is ripe for a meme! Especially when we walk through season 1 Lee being mean to Amanda! lol she looks like she’s enjoying it

Given Amanda is working on cuffs behind Lee’s back, it would have been hilarious if he’d made a crack about her watching where she puts her hands

Amanda: Sorry. (Amanda rubs his wrist a bit. Lee looks around trying to assess their current situation) [I guess.]
Amanda continues: OK. Let me get the other. 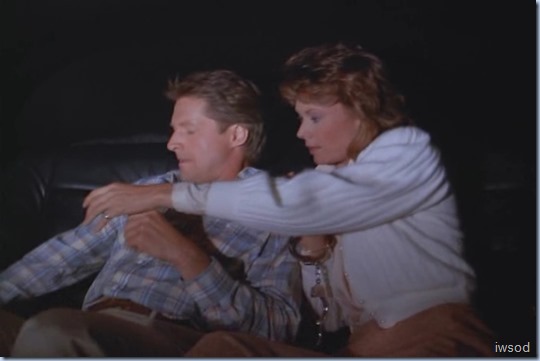 (Lee is checking if the door is locked, while Amanda suggests she un cuff his other hand) 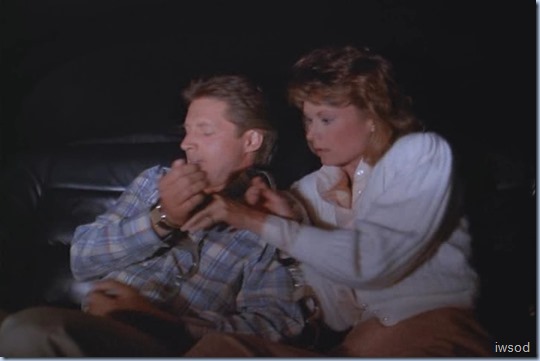 Lee: Yeah. This thing’s locked from the driver’s seat…
We see a view of the back of Mischa’s head. He’s none the wiser at this breakout that’s under way. 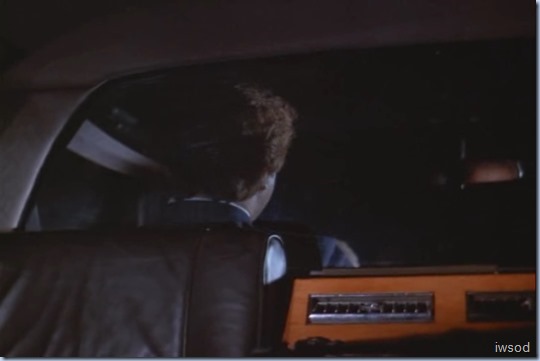 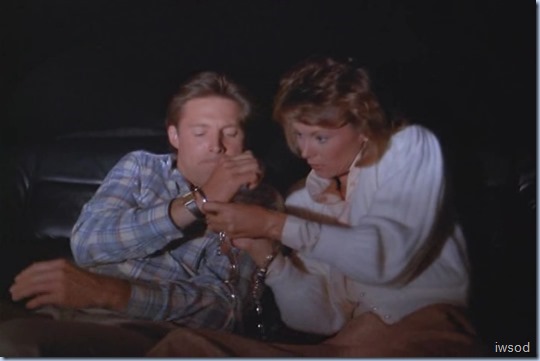 Amanda: Yeah, give it a tug. (the other cuff comes off)

Lee looks around the compartment to see if there’s anything he can use.

He comes across a corkscrew. [rofl! Mischa left a corkscrew back there??!!! whahahahahahaa!!!!] 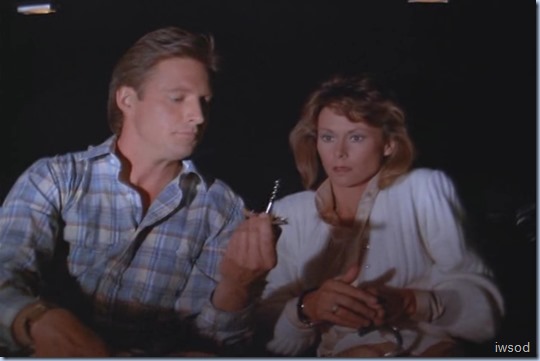 Amanda: This is a car not a bottle of wine. [Old Amanda would have said I can’t drink wine now! we need to escape!]
Lee: Huh. [Lee does another one of his half chuckles at Amanda’s response.] 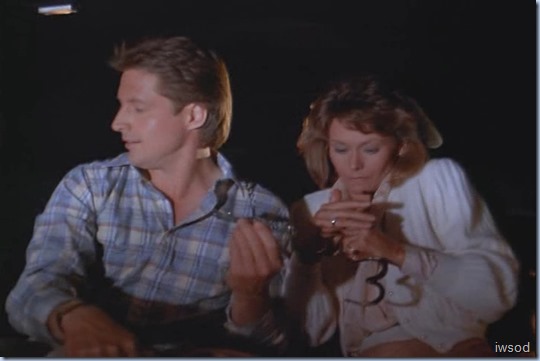 Lee gets to work on the drink errr I mean lock… 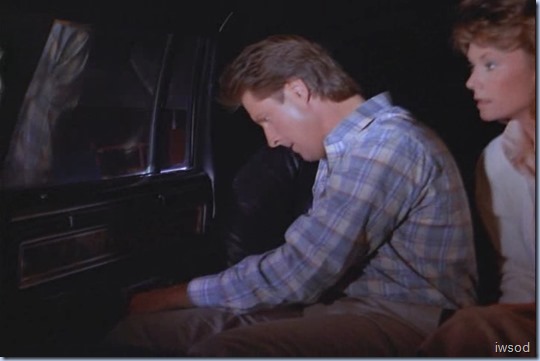 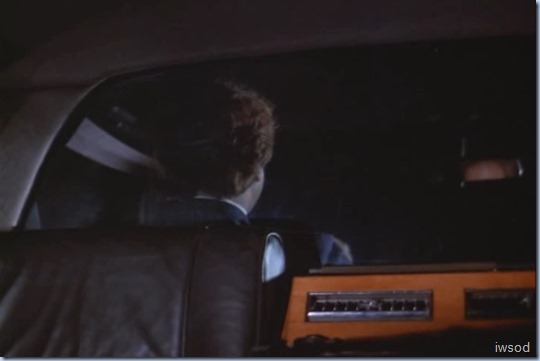 We cut to nightscapes of DC..
And I shall pause here for the moment..
Can’t wait to hear what you all think! Anyone remember watching this for the first time? what did you think of Tony at this point?

How fabulous is it to see Amanda using her new super spy skills, and Lee seems to enjoy it

Amanda is fantastic under pressure – surely this is the all important trait for a super spy to have?! It’s one thing to pick a lock in the office.. but it’s another when your life (and the life of someone you care about)  is at stake I’m guessing..

Anyway, I’ll finish here and look forward to hearing from you!