Tag time! What an epic this episode has been..for some.. a happy epic.. for others.. an odyssey which tested their endurance

but I do hope the episode has improved a little for you! So, finishing up this episode, we see Gail being wheeled away on a stretcher to a waiting ambulance. Oh poor Gail! 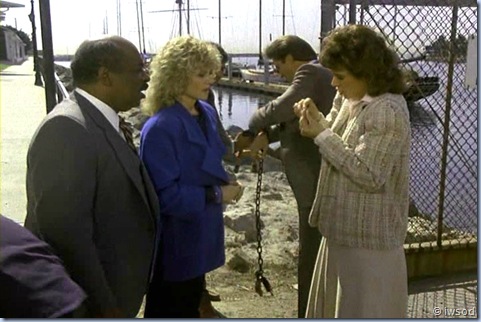 Lee’s shackles are being removed [Hey! is that  a metaphor???!!! Lee is finally free to accept a new partner in his life?

]… Amanda struggles to open her locket- Oh ROFL!! Yep, Billy- the big boss,  takes the microdot in person.. too funny! He doesn’t like to delegate does he

(I will ignore the annoying Locket is stuck closed moment

Again, Lee and Amanda are alone.. Now they are out of danger, able to think a little clearer.. and finally resolve things between each other!
Lee: well, I guess everything turned out ok

Amanda: I guess
Lee: Yeah.. ahhh.. Amanda.. [Lee looks around to see where everyone is.. knowing they have some important things to say to each other – maybe he didn’t want them to be interrupted again? Amanda cuts in here seizing her moment. I think at this point, while she wishes she had Lee’s approval,  she doesn’t think he is going to ask her to stay- but she has made up her own mind about what she will do

Amanda: You know I am very proud of my job and I’ve been doing a lot of thinking 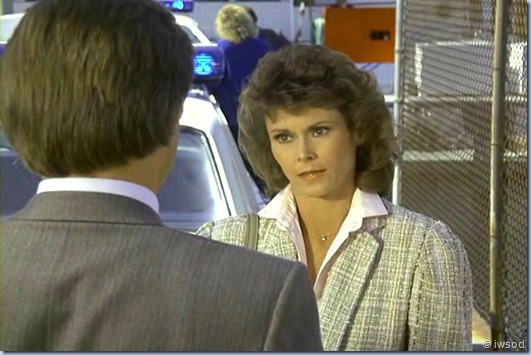 and I really don’t think that it was my fault that microdot got stolen. [Isn’t this a huge moment for Amanda’s character?!!! good for her!]
Lee: no no you’re right [Lee seems to want to put Amanda’s mind at rest asap…]

Amanda: Yeah, I .. I know I’m right.
[She doesn’t need Lee to tell her she is right. she already knows! hurray!! This is real progress for 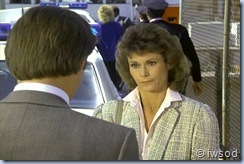 ]
Lee: you’re right, you know that part about your errr..
Amanda: my resignation. 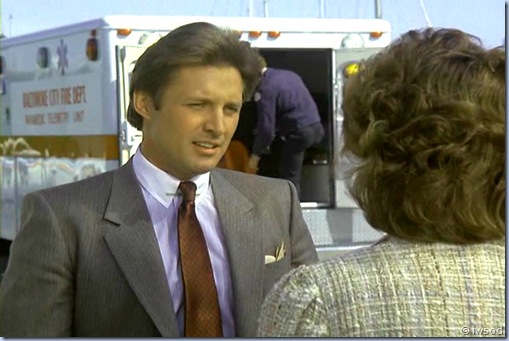 [He pauses here- and we see Amanda brace herself- I think Amanda believes Lee is about to tell her again: he thinks it is too dangerous for her and she should leave! Or she isn’t cut out to work at the agency.. I love that Amanda believes that, but still tells him she is proud of the job she does! Amanda’s growth in her career is one of my favourite aspects of this show! ]
Lee continues carefully:  …….I think that you ought to give that a little more thought.  [squuueeeeeeeeee!!]

[You know what I love about this – Lee doesn’t tell Amanda what to do!!!- he leaves the decision to her, knowing this is Amanda’s decision to make – not his!!! How wise of Lee to do this!!! but at the same time he expresses his opinion, and that he values her!! awhh!!!  Hurray! : he makes it known he would like her to stay

Personally, I think Amanda had already decided to stay- being proud of her work.. but she was probably thinking it wouldn’t be working with Lee anymore

It’s a good way to express it- she was not without fault in this situation also.. bring on the smiles!! things are looking up!!! ]

Lee: yeah! ha! that’s probably it and I guess I really didn’t understand what you were saying [Lee mirrors back what 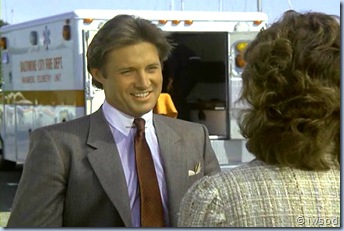 Amanda just said – he could also have said- you didn’t make yourself clear! but he doesn’t.. it is lovely.. and for me, it illustrates how each of them is admitting they were 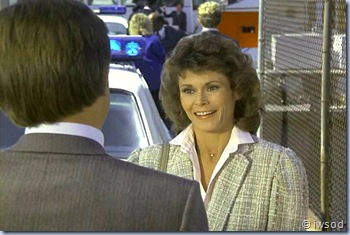 at fault, and that there is no hard feelings between them. Awh!! they are being kind to each other

]
Amanda: yeah, the only trouble is I already..

Lee: I… happened to intercept this this morning..[‘Happened to’?? why you sly dog you!!

Amanda: hmm what should we do with it? [‘we’?? Hmm..I think this is Amanda testing the waters here- are they a team?? Is there a ‘we’ ?? or will Lee step back?? Lee licks his lips here before he responds! 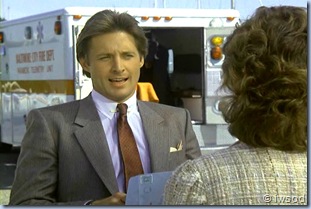 Lee: Well.. How about, the circular file…
Lee makes a very theatrical toss of the resignation into a garbage bin ( trash can!!) 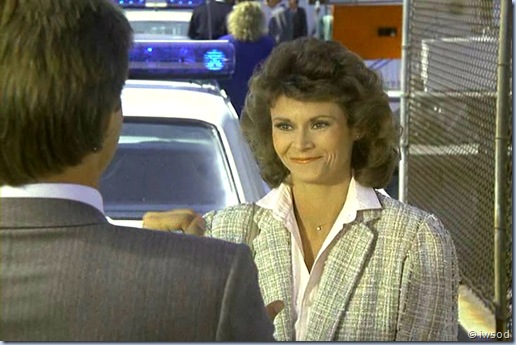 Things are working out for himself and Amanda 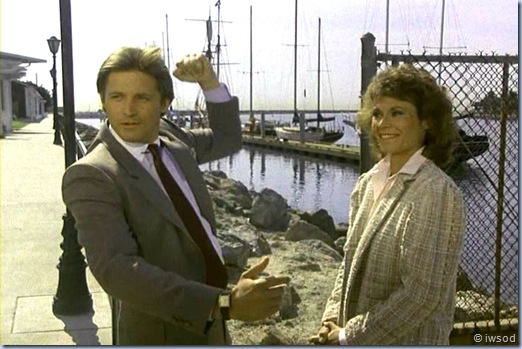 Lee turns back to Amanda and continues: …..  Partner?
He holds out his hand to her in a handshake.. 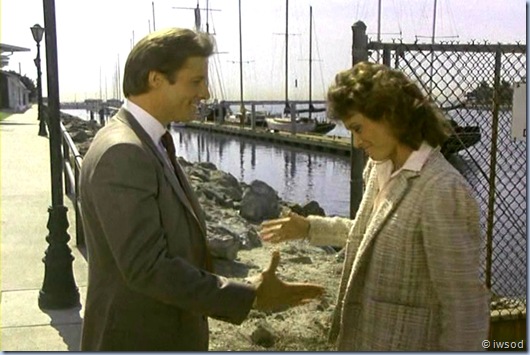 Awh!!! See now that is a key moment in their relationship!!!

So Lee intercepted the letter this morning? that was before he found out about Amanda being sold!!.. hmmm.. so he had already reconsidered his thinking by then- he didn’t need to know it was not Amanda’s fault- he still wanted her to stay

What happens between Lee in the boat saying: maybe you should leave the agency – it’s too dangerous, and: I think you should reconsider?? I’m not sure.. IMHO it isn’t really overtly explained.. Lee and Amanda retrieving the microdot, working great as a team, all working out in the end??did that change his thinking? or did he just reach the point where he realised – it is her decision to make.. and if she is going to choose to be a part of the agency- he would rather she work with him as his partner than be with someone else who isn’t going to care about her safety as much as he does? hmm.. I’m going to go with the last option.. what do you all think?

Lee does actually care about her.. awhhh…. Lee’s natural response to strong emotions and conflicting emotions  seems to be to revert to Anger-[Amanda got a good look at his temper in the first time, and she treated him like he was a little boy! –you remember his response to her suggestion he let a Valet park his car?! rofl!!] Don’t you love the moment in this episode where Lee mutters ‘ Oh Amanda you make me crazy!!’ Love it!! she does doesn’t she!

In private  – he doesn’t seem to reveal who he is.. he wears a mask.. but.. with Amanda, in this episode he learns he needs to let down his walls, learn to control his temper, and be more open and honest with her (and himself!!!) – she won’t accept less- and he knows she deserves better!! Plus I think by now Amanda has proven herself to be a trustworthy and loyal friend to Lee.. Awh!! What a fun journey we have ahead of us!

I think it’s great- Amanda is able to decide for herself she wants to stay in the job- regardless of what Lee may or may not think of her- I think for her character that is a big step, and that up till now she had been doing it in part to earn his respect in some way..[and to look after him- she likes to look after him!

]  but she has realised she respects herself and she is proud of how she does her job! Lee got her into it… but here and now it is Amanda who is choosing to stay in it!  Amanda doesn’t have to have Lee’s acceptance anymore, but she would still very much like it! Awhhh!!!

Amanda is reassured Lee is on board when she gets to ask him what they should do with her resignation.. He  does one better than saying ‘don’t go’ he calls her ‘partner’!!! whoooo hooooo!!!!! Lee’s first time.. that is huge isn’t it!!!  [well other than when he was talking her into feeding his fish in saved by the bells..but he totally didn’t mean it then! ] Awhhhhhh…. Isn’t Lee cute here, chuckling, a little bashful.. doing this emotional stuff is grown up for Lee! He manages to do it well when he needs to- well done Lee!

Did you guys notice the almost ‘subliminal’ gratuitous bikini babe

thrown in to decorate the circular file??!!! for no reason at all… ha haaaa.. ( the light is all different too.) Hey, it looks like Lee gives a hoot! He didn’t give Amanda the boot! and he didn’t pollute!!! 😆

I think Lee realises it was not fair of him to downplay Amanda’s contribution to the agency –even though being at the agency puts her in danger. She is her own woman.. And he really values her being in his life! And he wants her to continue to be a part of his life! I think Lee accepts that Amanda can be his partner, but that doesn’t mean they are equal.. they are different.. and at this point, I think Lee is still very much the senior agent ( who always gets the bed

haaaa) – but he is now acknowledging Amanda’s work and her own talents and experience.

I think from this point on, the friendship moves up a notch.. It’s like it is now openly acknowledged they will be in each other’s lives for years to come.. awh!!!! but I think it is wise they put the whole sexual tension between these two out of the picture in this episode.. and focused on Lee’s overprotectiveness and unwillingness to accept Amanda as his partner. And Amanda’s need for Lee to tell her what to do – as they have left things.. the sexual tension between them is not a deciding factor here.. and IMHO it remains unacknowledged by either of them – to themselves!! and to each other!! but.. it won’t be long before it pops back into the picture! ( ship of spies anyone??!!!)

I still don’t think Lee is ready for a committed relationship with Amanda at this point, and also, I’m of the opinion that Amanda at this point has ruled out that possibility. From now, I think Amanda enjoys her growing skills and experience at the agency, her autonomy grows.. and it is great to have that happen before anything romantic happens with Lee!!

This episode is very different in tone to the usual SMK episode, while I love this episode I am glad it is not the norm!! .. I completely understand where you guys who don’t enjoy this episode are coming from! There are moments that are gross, or painful, or where you just want to bang Lee and Amanda’s heads together! But.. it is the moments we had to have to progress, and progress they do very beautifully! Because of this- I am able to watch the difficult moments and enjoy the episode: knowing it is all worth it! For others, maybe that doesn’t work for them.. but I do hope that maybe working through the episode, and finding the little moments has improved the episode for you just a little bit.. ( oh and I try to skim over all the skin crawling subplot.. ridiculous! all that effort over trying to get Amanda’s poppyseed cake recipe?? ! LOL! that wasn’t what was going on?? If not, I don’t want to know!

I love this episode!! It is unique! It is a milestone!  It will be lots of fun to keep working through season 2 and see where they go now  ( though keeping the episode order in mind- I think the next two episodes should be before brunettes..but I’ll get to that! ).

I bet there are some things I have neglected to mention.. feel free to please share with us!!  I hope my jumbled thoughts have made some kind of sense!! Thanks for your comments so far guys! I’ll reply to them soon!! byeee for now!!